After spending a little too long out in the so-called “real world”, it was so damn refreshing to meet up with some of my tribe for a multi-day hike on my home trail. To those CDT tram members who couldn’t make it out, you were truly missed and gossiped about… A LOT! 😂 But I’m hoping some of you cross paths with us on the PCT later this year. Good luck Tapeworm on making it over halfway on the AT. 🔥 Enjoy the north. RIP The Doyle. You will do well I’m certain, but I’ll miss the glorious shitshow you once were. How the trail has changed! 🤯
I did a thing today. Probably won’t do it again. But I also said I wouldn’t run 13.1 miles ever again, sooo… 🤷🏻‍♀️Thanks @trevtrevorwhatever for the support, and super rad to catch up with you @wildturkeytrotsthru Thanks for the hospitality!
9/9/21 - Mission Accomplished! 🤘
Montana! You pretty!
Yet again, Montana brought the hiker friendliness in Augusta, and a sweet sunset too! Once we were able to force ourselves to leave, we were off to “The Bob” and finally got to see the Chinese Wall. We’re officially in the heart of grizzly country, y’all! 🐻
The sweet views continued all the way to Augusta!
Had an awesome birthday which I celebrated with my stinky, freeloading #hikertrash tramily, the wonderful people of Lincoln, and Daryl the Sasquatch. The hike from Rogers Pass was just as amazing as the hike into it after we hunkered down in a yurt to avoid the rain. More climbs, but a lot of ridge walking by rock ledges and towers.
No more smoke, but the days have been windy and the nights have been cold. We visited an amazing outfitter in the middle of the trail, got to see Golden, a familiar face from the AT (2016), and lots and lots of cows! I had been in a bit of a funk lately, but the ridge walk right before reaching Rogers Pass snapped me out of it!
Got stuck in the Butte vortex. We hitched in, hitched out, hiked to the north side then hitched back in. Pizza Ranch was our second home. Eventually we made our way to Helena, our second vortex. Before our arrival, we got pounded by hail and rain. The wind was blasting through the trees so hard, they were snapping like twigs behind us. The people of Helena were beyond hiker friendly. We got stuck a second day when a girl working at the brewery let us crash at her place for free, hot tub included! Life’s good!
Posted on February 8, 2017January 11, 2019 by Stubbs

After a relaxing stay in Roan Mountain, we got dropped back off where we left off on the trail. This first stretch of the trail was really mellow. There were no big climbs as we walked through meadows, passed a cemetery, and a couple waterfalls. My only issue was I drank a lot of Pabst Blue Ribbon the night before, so I was running off the trail a lot. Here’s some scenery to get that visual out of your head.

We stopped at Mountaineer Shelter which had a really cool set-up. You could take a short walk to the top of one of the waterfalls (Mountaineer Falls), and if you walked a short way downhill you can relax by the base of it. The shelter also had 3-levels, the top being a tiny little loft, and a bear sculpture carved out of wood sat out front. 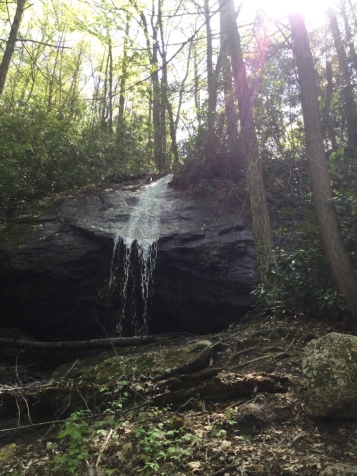 The next day was Mother’s Day, and it was fitting that we would pass by moss shaped like a heart, and that we were able to get phone signal after passing the (not-so) “Hardcore Cascades” at a rock outcropping. A lot of people huddled around to call their moms and grandmoms at home, including ourselves.

The next stretch unfortunately had recently been ravaged by wildfires, so a lot of the surrounding trees were blackened and tiny little saplings were merging from the soil. Once we reached a road crossing, we were waved down by a bunch of hikers lounging in chairs. Some awesome trail angels had a taco bar set up with all the fixings, and of course we couldn’t resist! A bunch of hikers had their tents and hammocks set up nearby, and had gotten a hitch out to buy beer. They wanted us to stay, but we resisted temptation… after drinking two brews, and kept hiking onward.

We walked between massive rocks and took a side trail to Laurel Falls before stopping at Laurel Fork Shelter. Fortunately, we got there before the rain did, because a bunch of day hikers stopped by the shelter to chat, and it down-poured shortly after they left. 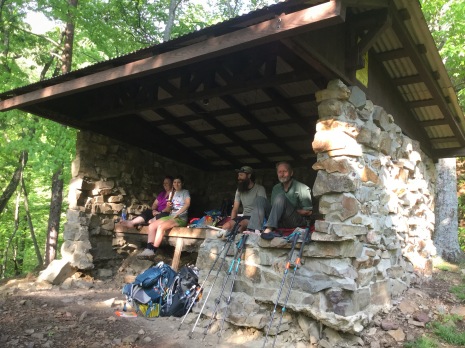 A number or people took the shortcut around the mountain to get into Hampton, TN, but not wanting to miss an inch of the trail, we climbed up and over until we reached Shook Branch Recreation Area.

We were thrilled to see that there were trail angels set up there, and that we had gotten up early enough to grab breakfast with them (ham and pancakes). They went by the names Granny and Old Goat, they had a kid who hiked the whole trail, and were hooked on following hikers up and down the AT to give trail magic in the form of food and transport. More and more hikers showed up after us, and soon they were serving lunch. A former hiker, Peppermint, and her daughter showed up and set up shop next to Granny and Old Goat since she coincidentally had planned to do trail magic the same day at the same location. We feasted!

Some hikers managed to get a hitch into Hampton to get some brews which we all enjoyed, and some of us, including myself, went swimming in the lake with the geese. It was hard to break away, but we left and we had to bypass the nearby Watauga Lake Shelter, since there were signs along the trail stating it was closed due to bear activity. I had left my leggings and long-sleeves on, since I had been warned that there was a lot of really tall poison ivy all over the trail ahead. This was short lived as I was sweating profusely, and learned the poison ivy wasn’t as overgrown as informed. 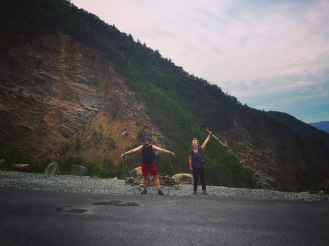 We walked across Watauga Dam, which was an interesting change of scenery before entering back into the woods, and climbing up to Vandeventer Shelter right before dark. The shelter had nice views, but was crazy crowded since there were a few extra people who were hiking this stretch of the trail in order to make it to Trail Days in Damascus and/or the pre-party thrown by AT alum group, “Riff Raff.”

We hiked on to Shady Valley, TN where in a nearby field, the Riff Raff party was still going on (it’s a multi-day event). Not able to pass up AT NOBO (northbound) tradition, we pitched our tent and grabbed some free snacks and brews. 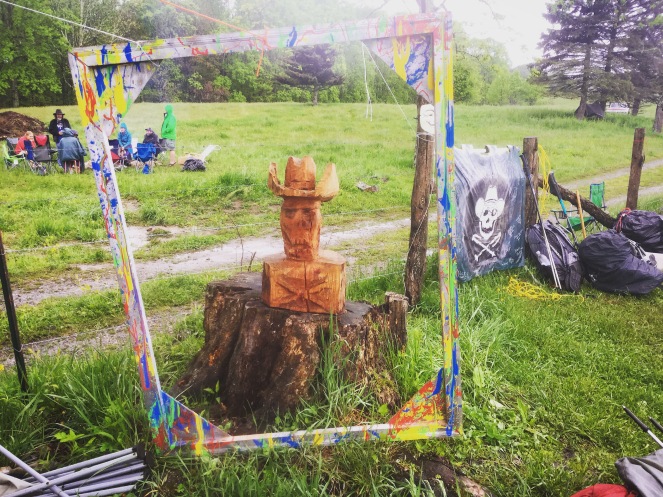 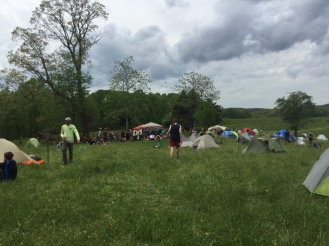 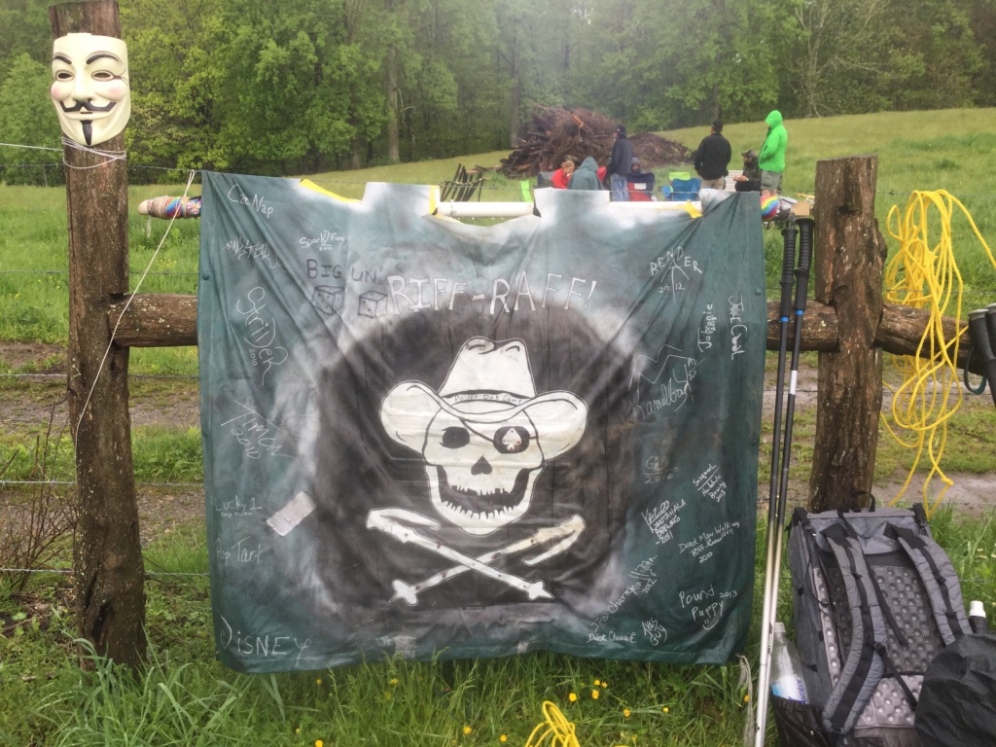 I must have had fun, because I passed out during the daytime with little recollection how I made my way to my own tent in a sea of tents. I wasn’t so lucky sobered up when I went to pee in the middle of the night! I had a lot of trouble finding it, since a lot of hikers had the same exact tent as we did (Big Agnes Fly Creek UL2). I couldn’t see well in the dark and Frisbee wasn’t the only one standing outside their tent, so I almost headed in the wrong direction. Apparently someone ate some acid during the festivities, and was having a bad trip on the other side of the field. There was a bit of hostile screaming throughout the night. He repeatedly screamed 10 or more times, “Where the fuck am I?” and threatened to kick someone’s teeth in when they tried to help him out.

After that exciting night, we escaped the party that was continuing for an additional day, to head for the Tennessee-Virginia border and into Damascus. Damascus, VA labels itself, “Trail Town U.S.A.” and is home to the annual hiker event, “Trail Days.” More on our arrival into town and the weekend event next time!

Jump Back to Part 5 or Jump Ahead to Part 7