The poor condition of Frisbee’s grandmother was riding his mind the whole time. She was 90 years old, so we knew it was highly unlikely she would snap out of the unresponsive state she was in the last time we heard about her. We knew that soon enough, we would have to return home for a funeral, but we did the best we could not think about it. The Appalachian Trail is a good place for that.

After spending a mosquito-infested night at Jenny Knob Shelter, we passed by 4 baby birds that must have just taken their first leap from their nest. They bounced around clumsily and would fly in short spurts around us, chirping loudly. We walked across a suspension bridge and stopped where the trail intersected with VA-606. 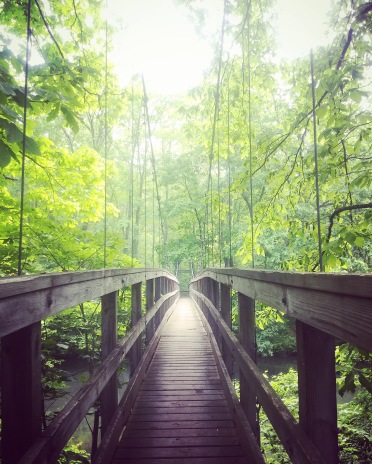 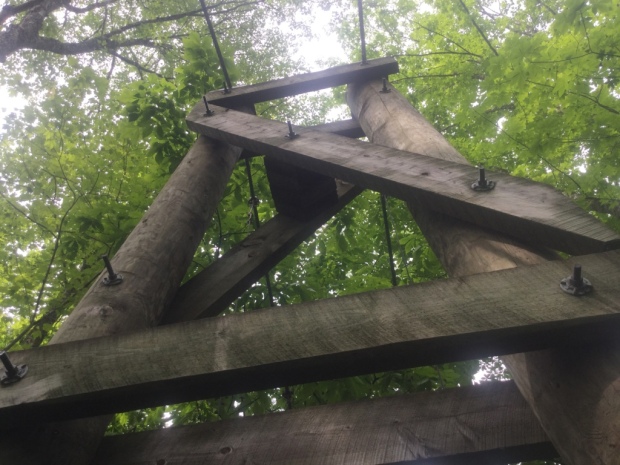 Strider, Frisbee, our new buddy Ninja Roll, and I, took the short half mile walk down the road to Trent’s Grocery for, you guessed it, warm food and beer! It’s funny how painful it is to walk on asphalt when you’ve been hiking on dirt for months on end.

We placed our order, stepped off the property to enjoy our beverages, ate, then returned to the woods. It started pouring rain and I thought we were only a short walk away from the Wapiti Shelter, but I was so very wrong. There was a nice pond on the way filled with what looked like little newts, and across the pond was a group of people on horseback. It stopped raining just shy of our arrival to the shelter and we were drenched. We had plans to hike further to get closer to Pearisburg, but decided to stay there and dry out our gear. Apparently, people were killed at Wapiti Shelter years ago, but despite the “ghostly” warnings left in the shelter log, we slept quite soundly. Perhaps it was Bearchaser’s bedtime story poem he read to us about his recent bout of food poisoning, or maybe it was because we were surrounded by lovable dogs. 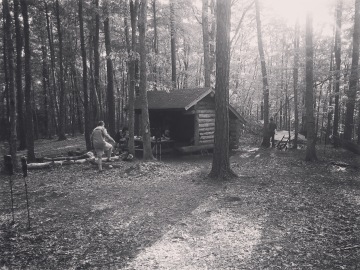 The next day was full of beautiful views, and a little reunion followed when we ran into a group of hikers we had hiked with from the Smokies to Damascus. Unfortunately, I started experiencing some sharp pains in my right leg and lower back around this time. 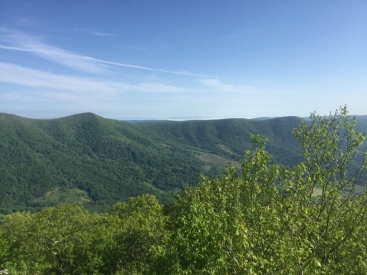 Strider, Frisbee and I made it to Pearisburg by hitching a ride into town. We gorged on all the food at the awesome Chinese buffet there, grabbed resupply at Food Lion, then we split a room across the street at the Holiday Motor Lodge, which was a real gem! The people-watching there alone is enough reason to return there for another stay next year! There were drug deals left and right and a guy who closely resembled Kid Rock running around from floor to floor. Loved it!

Unfortunately, we were informed of what we dreaded, Frisbee’s grandmother passed away. His parents insisted we continue hiking since Grammie would have wanted that, but because she had meant so much to us and since we were so close to home, we decided we would take a brief break from the trail. Funeral arrangements weren’t going to be set up for another few days, so we decided that we would hike to the next town, which was nearby Blacksburg, VA, before getting a ride home.

The next day, we scarfed down some Hardee’s for breakfast, and got a hitch out of the parking lot from a woman who was helping out her friend that was hiking the trail as well. The day brought some more nice views and we saw our fourth snake in the stream we were trying to get water from, which was small and black with yellow-green stripes. Shortly after passing the Rice Field Shelter, which we took a break at, we walked through a field which had a view of West Virginia (a state we wouldn’t be reaching along the trail for quite some time). 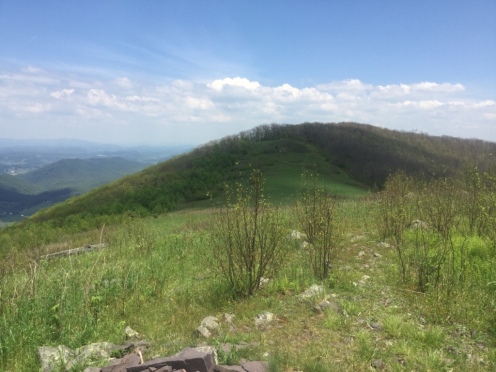 There’s the Riff Raff party, followed by Trail Days, and two weeks after that, there’s the Captain’s Hiker Feed which is right on the trail. Although we doubted we were going to make it, we made it just in time for the last day of the event! I was in a good deal of pain, so I was dying to park my butt somewhere and drink a beer.

We took the zip line across the creek, got a plate of food piled as high as we could get it, and relaxed. We learned a couple other friends would be leaving the trail for good, which sucked, but we enjoyed their company and the party while we could.

There were some very entertaining karaoke performances too! Unfortunately, I opted out of a long night of drinking, and decided to lay down in our tent and rest my back. I convinced myself that the sad visit home would be a blessing in disguise by giving me an opportunity to rest and hopefully recover enough to finish.

The next two days would be excruciating. Not necessarily because the terrain was bad, although there was a 1,700 foot climb first thing in the morning on the second day, but the pain shooting along my leg and back was horrible!

Strider, Frisbee, and I got a hitch into Newport to the Super Val-U. The woman that was kind enough to drive us, told us about the pipeline that they were planning on putting in the ground, and how it was going to destroy the landscape and affect the people who live there. It was sad to hear.

We grabbed hot dogs and chips, and waited for my Dad to pick us up to take us home. We dropped Strider back off on the trail, and I stared at the mountains in the distance as we drove home for Grammie’s funeral.

Jump Back to Part 9 or Jump Ahead to Part 11