Refill took a zero day with us at our house and we took him to REI so he could pick up new boots. Our buddy Chedda, who had left us and the trail back in Roan Mountain, TN, lived nearby and came out to visit. The next day, we got a ride back to Harpers Ferry. John was relieved we had showered since we stunk up his car last time he drove us around. 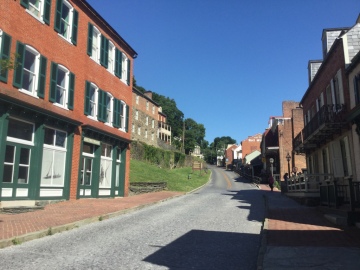 Harpers Ferry is the only stop you make while in the state of West Virginia, and after being in Virginia for over a month, we were glad to pass yet another border and enter into Maryland upon crossing the bridge over the Potomac River.

A lot of people claim that Virginia is flat along the Appalachian Trail. Anyone who hikes the AT through the state will call bullsh*t. Maryland on the other hand, is super mellow terrain! You start off on the completely flat C&O Canal Towpath and then bump along gradually to Gathland State Park, a lovely little place that Frisbee and I decided to get our engagement photos at a couple years prior. 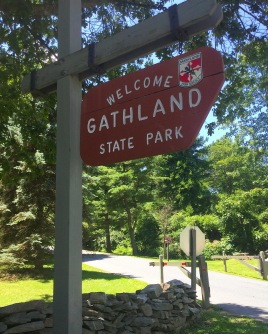 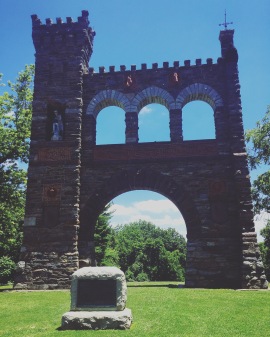 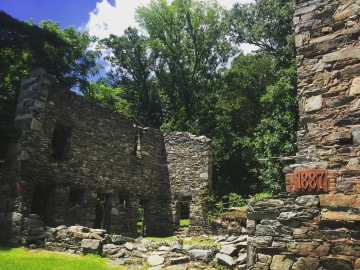 We had kept in touch with David, our wedding photographer, and he was kind enough to meet us out there to do a little photo shoot. We were making great time and got there early. So we decided to lounge around the park. Frisbee played “Frisbee” with a few hikers that were there. Shake and Bake were there briefly, as well as Refill and Schnitzel representing Germany. Cautious, our “trail son,” was there too.

I tried joining in, but felt a jolt of pain through my leg as I stepped down on my foot funny, and decided to go park it. I got so caught up in the fun, I forgot I was still badly injured. Stupid me.

David showed up and took a bunch of photos of us, Refill, Cautious, and Schnitzel (who was hamming it up for the camera and cracking me up)! We even walked to the next shelter (Crampton Gap), and he took some shots there. We haven’t gotten them back yet, but David is a very busy man and does excellent work, so I trust it will be very well worth the wait!

We bumped along all the way to Dahlgren Backpack Campground. We didn’t take advantage of the free showers there, but later wished we did, after we hitched into Boonsboro with Refill.

We went to Dan’s Taphouse to get food and drinks and positioned ourselves in the furthest corner of the bar, so our odor wouldn’t be too offensive to the other patrons. The bartender, very rudely, carried on about how horribly we smelled and kicked us outside on the patio (which was actually where we were originally headed upon arriving, but you had to enter the restaurant to get there).

Funny thing was, nobody in the bar seemed to mind! They actually all stopped us one by one to ask us questions about the trail. None of us really minded sitting out on the patio (trust us, we know how bad we smell!), but the attitude received by the bartender was super unnecessary, and even the waitress apologized for his behavior. Fortunately, the food and beer selection was good enough to make up for the hassle, and Cautious hopped the fence to join us once he made it in town.

We got a hitch to a liquor store to grab some beer, and then got a ride back to the campground. We chatted with some section hikers at the campground, then called it a night.

The next morning, we passed by a very old, and very pretty church which was across the street from where we slept. Shortly after that, we made our way to Washington Monument State Park. We ran into old friends, Burrito and Cupcake and their awesome pooch, Dexter, who they just reacquainted with after Dexter took a brief break from the trail. 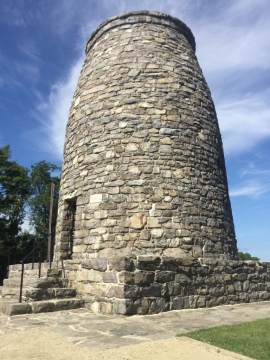 After going to the top of the monument, we bumped along until we crossed over the I-70 footbridge, a place I have driven under many, many times only hoping that one day (today) I would be crossing it overhead. 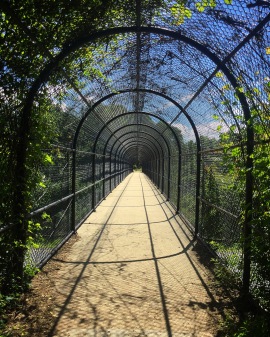 We took a break at Pine Knob Shelter then headed to Annapolis Rocks to check out the amazing overlook.

Brother Blood and his friend, who we had also hiked with briefly during the beginning of it all, were waiting at the road before arriving at Raven Rock Shelter, and she brought some trail magic with her! We stopped for soda, cookies and pretzels, then continued on with our hike to Raven Rock Shelter.

Raven Rock was a super awesome shelter to stay in, and we ran into a bunch of old friends there and made a few new ones too! We got well rested for the next day, when we would be crossing the Mason-Dixon line into northern territory and yet another state, Pennsylvania!