Oops I did it again! 🤭 Canada 🇨🇦 to Mexico 🇲🇽 - (complete November 5th)! But this time I accomplished something less than 600 people have done; I finally received my Triple Crown! 👑 👑 👑
We heard drum and bass by the forest road and I knew immediately who it was! 😂 JeffR with his magical timing tracked us down and gave us trail magic before we made our way towards Warner Springs. It was awesome seeing you @jeff_rrrr ! The next day, I had to do my best “NeverEnding Story” impression when we reached Eagle Rock. That’s how this whole journey has felt. We saw a tarantula, ate incredibly well in Julien (the most hiker friendly town on trail), saw birds and planes on our way to Mount Laguna, got slapped with crap weather and slept in a flooded pit toilet to avoid freezing to death, then we were treated to champagne by the lovely owners of Pine House Cafe & Tavern in Mount Laguna. There’s been so many ups and downs on this thru hike and I’m pretty tired. I’m ready to end this chapter of my life and do new and different things. Onward to Mexico! 🇲🇽
It was a long, never ending climb towards Mount San Jacinto. At least our hard work was rewarded with a super cool hiker town the next day. Idyllwild was a blast! Especially since two of our CDT brothers, Coffeebreak and Tapeworm came out to hang with us. Whiskey Mama misses you guys already! 😂 Tape even hiked with us a bit the next day and took us to get Mexican food afterwards. 🌮 We were grateful to have some reliable water sources the next day as we headed towards Warner Springs. 💦
We stayed at the cabin to avoid the cold, then had some scenic desert climbs. The next day we passed the Whitewater Preserve. While walking through the Mesa Wind Farm, we caught a glimpse of the SpaceX rocket launch. Frisbee and I had seen the satellites fly by earlier on trail while going through the Sierra. We were stoked to get a ride to In-and-Out Burger and Taco Bell where we got to hang with our homie Tapeworm! It was awesome seeing you @doslove_ ! Later that night, we stopped a little distance after going under the overpass.
Had a great experience in Wrightwood and avoided the cold weather thanks to trail angels Emily and Dan! Everyone was so hiker friendly there! We took an alternate where walked to Cajon Pass the next day. Then we saw a lot of birds and coyotes the following day as we passed through Silverwood Lake and passed the dam near Hespia. Before night hiking passed the dam, we got a ride to Joshua Inn for hot subs and cold beer. The trail went from dry to green and lush as we took it towards Big Bear Lake. Less than 300 miles to go!
These trail towns keep getting friendlier and friendlier! The folks at 49ers Saloon in Acton were wonderful, and we got a ride in one of the cop cars used in the “Fast and the Furious” movies with Kevin who gave us a little Hollywood tour as he drove us back to the KOA. He showed us Tippi Hedron’s big cat sanctuary that drunk drivers have driven into by accident, a shack used in “Sons of Anarchy”, a property storing a gas station, motel and other things from Route 66 that are rented out for film, and rattlesnake filled gold mines. While taking an alternate toward Mount Baden-Powell, we met a pair of super rad Trail Angels, Loo (a NOBO PCT hiker) and Gabe. We hit the summit during a high speed wind advisory, but managed not to fly off the mountain.
Our alternate was pretty scenic and I acquired a license plate just as I did at the end of the #cdt. We were treated kindly in Agua Dolce and enjoyed the beautiful rock formations of Vasquez Rocks first thing in the morning. Vasquez Rocks and other areas around Agua Dolce have been used as a backdrop for dozens of movies and TV shows: Nope, Westworld, Star Trek, Blazing Saddles, Twilight Zone, and the Lone Ranger to name a few. This section of the PCT is gorgeous! 😍
With road walks come sun exposure and bizarre finds. After hiking through a massive wind farm out of Tehachapi, we made our way towards the LA aqueduct. Hikertown was welcoming, especially Neenach Market. Water is scarce so we took an alternate to Green Valley, which was even more hiker friendly! Saw a lot of awesomely strange things on the way in and out: bizarre statues on burnt down property, an ostrich farm, cool Halloween decorations, and my first bobcat on trail! The desert is weird and I love it!
Ah, I’ve missed the smells, sounds, and sights of the desert. The sunsets are extra special too! Trail Angels have been awesome by keeping us hydrated via water cache and Rolling Rock 😂 I’m so grateful for everyone’s kindness and support. After we started our journey through the wind farm, we reached the highway and got a ride into Tehachapi. Had fun at The Doghouse Saloon, a local biker bar, and the Apple Festival the next morning. Water has been limited, but we’re getting by.
Posted on April 12, 2017March 31, 2018 by Stubbs

The Approach Trail to Stover Creek 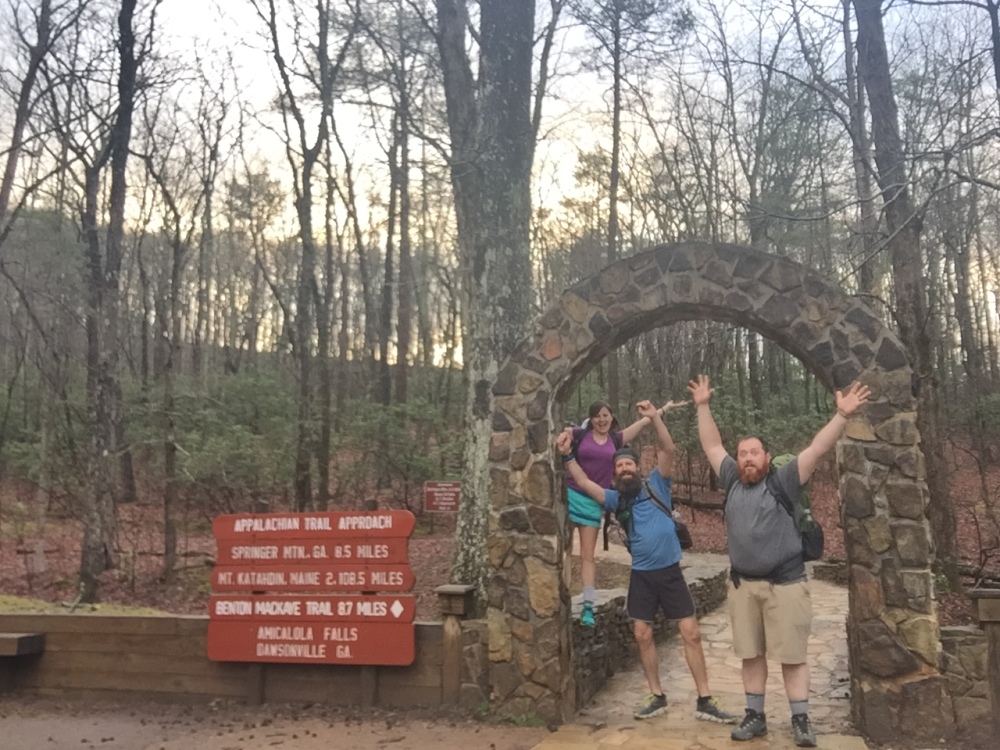 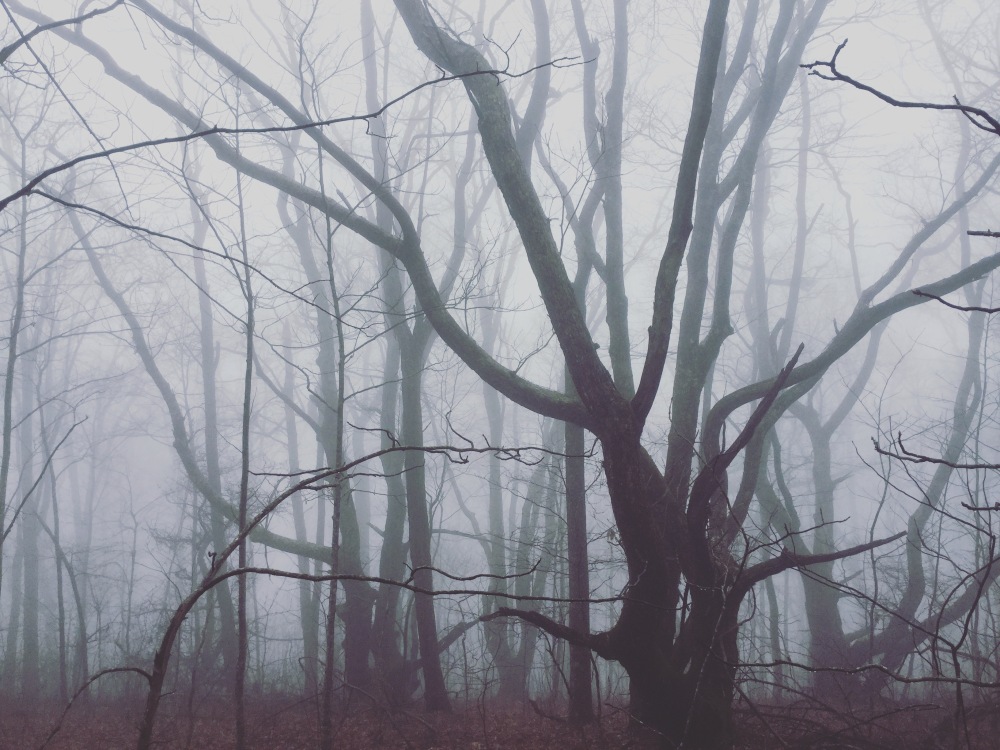 After a foggy hike to Springer along the Approach Trail with my husband, Frisbee, and our friend, currently known as Panda who is joining us during the first couple of sections, I anticipated meeting the new crowd of hikers at Stover Creek Shelter.
Our buddy Wokman who started with us last year decided to grace us with his wild and loud presence by meeting us there. He helped break the ice for some, and frightened a few others. We were glad that he could join us for the first 3 days. We met an awesome Aussie named Ears who was returning to hike the sections she missed from last year after getting injured. A strong hiker who we would name Middle Brother also became one of our hiking buddies for the first stretch.

Gooch Mountain to Low Gap
We climbed over Sassafras and Justus Mountains, which were as rough as I remembered them, and stayed at Gooch Mountain Shelter the second night. The third hiking day, we climbed up and over Blood Mountain to get to Neel Gap and a couple hikers went on a beer run to celebrate.

We had plans to camp nearby, but all the sites were filled and we weren’t trying to hike anymore, so after our beers, we got a ride from Ms. Janet to Blairsville.

She dropped off two ladies at another hotel before taking us (Wokman, Middle Brother, Panda, Frisbee, and I) to the Seasons Inn, the same place we zeroed at for the first time last year with Wokman. We were glad to dodge a nasty thunderstorm and rest up.

The next morning we grabbed breakfast at the Hole in the Wall (actual name), then got a ride back to the trail with a former thru hiker and ridge runner named Razor.

Before reaching our final destination for the night at Low Gap Shelter, we received trail magic from a man named Jim from Iowa who was traveling from Alabama. We shared the shelter with Middle Brother and Ears, and decided that we would be unofficially known as the “Poo Crew” as we would rate the privies in the shelter log books.

Right as we were settling in for the night, Zebra, a hiker from Poland, would roll in the shelter for the night and would hike with us the following day.
Low Gap to Dicks Creek Gap
It was a steady hike in the morning followed by a climb up and over Rocky Mountain and we were surprised by a lady walking her goat on the trail.
Right before climbing up to Tray Mountain Shelter, we were all blessed with trail magic in the form of burgers brought by Boy Scout Troop 24.

We hung out for a little watching the Jeeps drive through the mud, and listened to Panda play the guitar before heading to the top. We caught a nice sunset view before going to sleep. 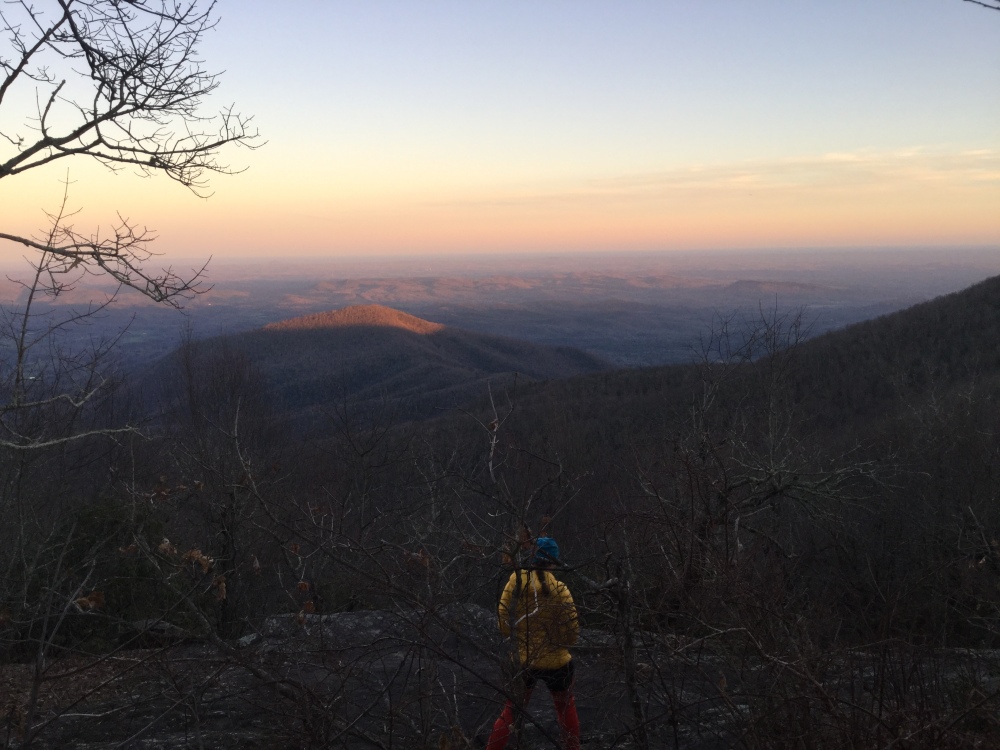 We packed up our gear, tackled Kelly Knob, then stopped at Dicks Creek Gap to wait for everyone to catch up. A man named Chris with his pup Jojo provided drinks and snacks as we waited, then we headed to Top of Georgia Hostel to get our resupply. We were rushed to get our food packed before the last shuttle back to the trail left, and stopped a mile later at a camp site. 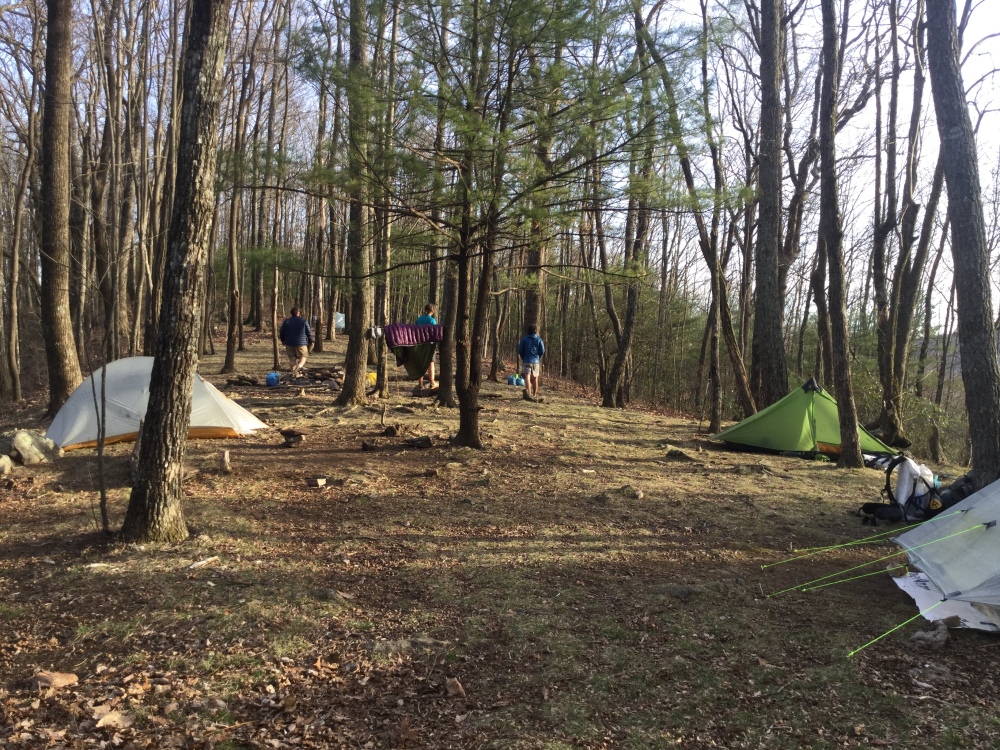 A Nero at Plumorchard Gap
I woke up to raindrops falling on the tent, so we packed up quickly and headed to Plumorchard Gap Shelter. We initially stopped for a food break, but then it started to downpour and wasn’t giving up until later in the afternoon. We had a lot of food so we decided to take a Nero day.

I tore the crotch in my rain pants which I would later call my “rain chaps” and once the storm stopped, there was a random yoga session out front of the shelter.
Plumorchard Gap to Carter Gap
To make up for lost miles, we decided to hike 19.8 miles to Carter Gap Shelter the next day. A little over 4 miles in, we crossed the border to North Carolina.

It was a brutal climb up Courthouse Bald, and we would meet up to refuel at the next two shelters on the way. 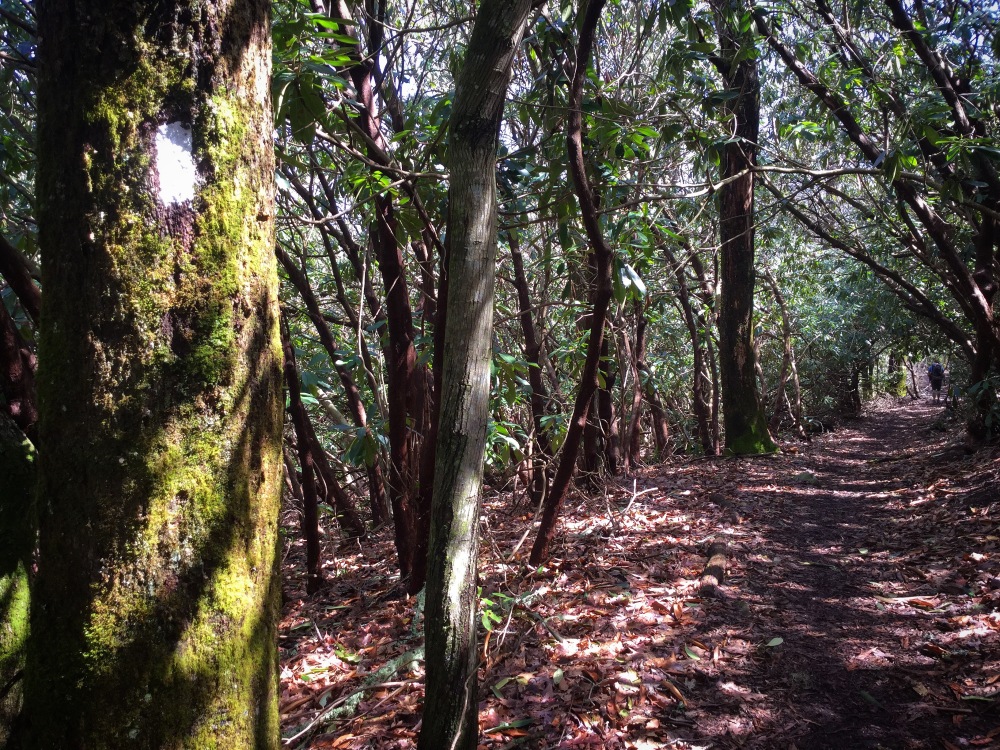 Once we made it to our final destination, we overheard during the night a guy yelling and banging his poles on rocks in attempts to frighten away a bear. We heard the next morning it was just some poor girl trying to pee in the bushes.
Beer Me, Franklin!

We were hoping that the rain would hold off until after climbing over Albert Mountain the next day. It didn’t. 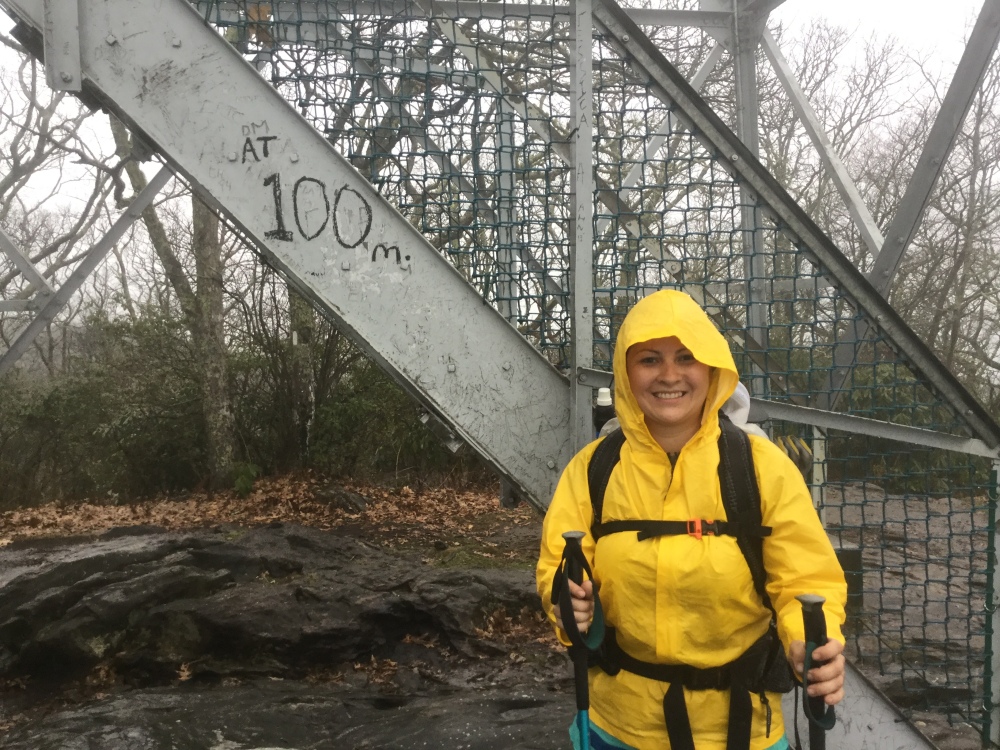 We crossed the first 100 miles of the AT, dried off, shivered, and snacked at Long Branch Shelter, then we all gunned it to Rock Gap to get to Franklin, NC. We were originally aiming for Winding Stairs Gap, but hot showers, clean clothes, and cold brews were calling. A shuttle took us to town, then we got a ride from Spoon who was driving one of Ron Haven’s vans to the Sapphire Inn, one of the few places not fully booked. We scored the cottage with Panda, Ears, Middle Brother, and Chelsea whose trail name is pending. We wandered to Outdoor 76 (love those guys), then to the Lazy Hiker Brewing Co. for some food truck grub and to drink more beer. 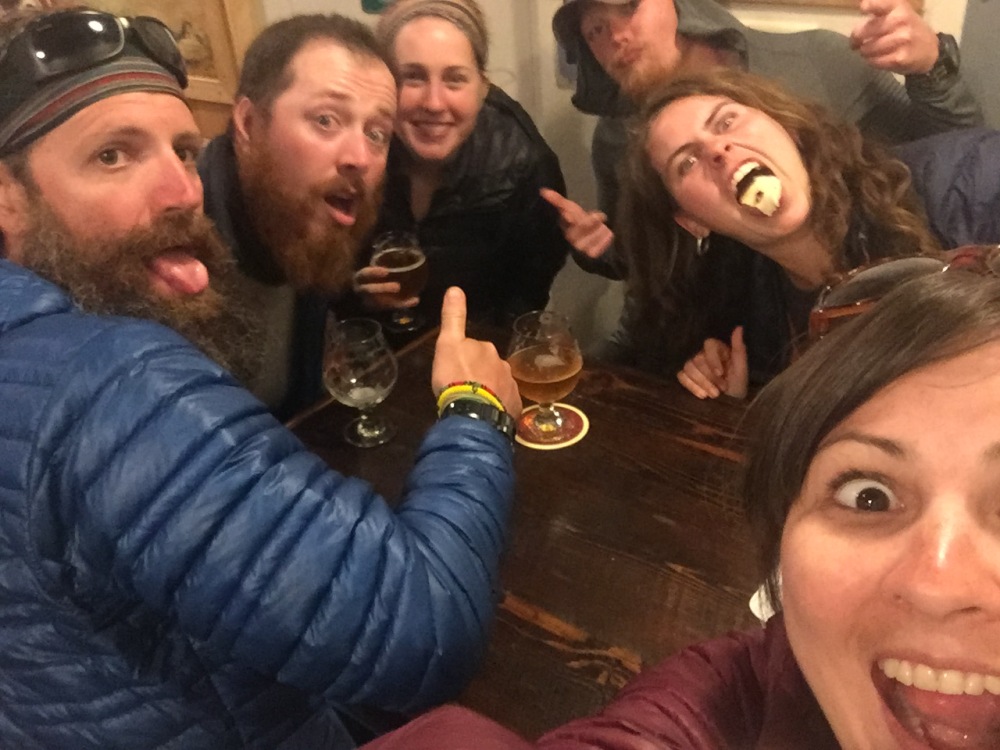 Even though we said we wouldn’t this year, the weather on the mountain was bad and we got stuck in Franklin’s vortex of Southern hospitality or two zeroes instead of one. I love this town!

Jump Ahead to Chapter 2

One thought on “The Dirt on the Trail: Chapter 1”