Originally posted on The Trek on August 9th, 2016

First things first, it is illegal to “solicit rides from the roadway,” as hitchhiking is generally defined in the law books of most states. However, it is the mode of transportation most hikers take to get into town to get their resupply, get their “brew brew” on, get that greasy burger or AYCE Chinese buffet, get rid of that smell from their clothes and themselves, etc. It beats hiking an additional 3+ miles on pavement to get to where you need to go off trail. Personally, anything not white blazed over a half mile wasn’t worth it to me during my thru-hike attempt! My husband and I had a lot of experience hitching and saw some techniques used by others as well, and found it essential to share our insight. Below is strictly my personal advice and it should be noted that my experiences differ from others.

Most people who pick you up are genuinely friendly locals who just want to help out a person in need. Most of them, but not all are aware of the AT, and will tolerate your stank with windows down and a smile.

However, it is good to be cautious and play it safe. My advice, don’t travel alone. Doing so increases your risk of danger and makes you appear vulnerable to those who may be predators of the road. If you’d rather do it solo, I would recommend pepper spray just in case. A side note I hate to mention, but an unfortunate truth, we live in a society where women are subject to more victimization than men, so ladies, proceed with caution especially when hiking and hitching alone. I haven’t experienced it personally, but have heard several accounts from other female hikers of vehicles stalking them by roadways and various other situations from locals (mainly when nearby a parking lot or road), that had them on edge. Don’t let this discourage you from having all the experiences you wish to have on the trail or make you suspicious of everyone who picks you up, but be alert and use your better judgement.

Avoid targeting people driving in company vehicles (it’s likely against work policy), big rigs (it may be too tricky to pull over), motorcycles (they won’t want you cuddling them so closely because you smell like dead animals), or police cars (duh!). Not that they’re out of the question, but they’re less likely to help you out.

A personal example of luck with an unlikely vehicle: We once asked a limo bus driver to return us to the trail from a brewery as he waited on people having a company meeting that he was hired to drive around. He shrugged and told us to get in.

When traveling with others, increase your odds by making sure the vehicle of choice has enough room for everyone and their packs. Split up if necessary, but likely you will quickly learn how to play and master human Tetris with each new hitch. Although we didn’t have our packs, during Trail Days we crammed 7 (1 in the passenger seat, 4 in the back seat, 3 sitting and dangling out of the pop-up trunk, driver not included) in a 4-door Honda Civic.

My go to? Pick-up trucks! Especially if they don’t have a truck bed cover, they will likely be overjoyed to help out without being forced to smell you or your sweat-saturated pack. Note: many states have laws against riding in the back of trucks. Proceed at own risk.

Rule number one, be sure you’re on the correct side of the road where traffic is headed in the direction you need to go. They’re more likely to help you if it’s not out of their way (insert common sense here).

Rule number two, stick out that thumb and smile, and try not to look like a psychopath. You likely already look hairy, sweaty, dirty and intimidating to most people, but do your best to look like a friendly human being and not a grumpy, shady hobo.

Rule number three, make sure they have enough room to pull over. This is a common mistake I have seen with the less experienced. If there is a parking lot, position yourself up the road from it so the driver has enough time to pull over after seeing you first. Once again common sense, but an error that may be made when not thinking from the driver’s perspective.

Rule number four, get creative! Although I haven’t tried it myself, I have seen other hikers have success with a cardboard sign which said, “To Trail” on one side and, “To Town” on the other. You could do a little dance! Everyone loves a little comic relief. My husband has strangely found a lot of success when he holds his hands out begging (with a smile of course).

Rule number five, and one of the most important of all, show appreciation once you get a ride. Thank the driver for their kindness, and remind them that they make our thru hike a little less complicated and a little more comfortable. The more people driving along the trail that have a positive outlook on hikers, the better! It keeps the tradition alive for ourselves, those around us, and future generations to come. And it’s generally just good manners!

Don’t be lazy. You’ll find your odds increased getting picked up if you appear pro-active rather than if you’re lying around or sitting. Having your pack off is fine though, and is actually more ideal since it makes loading your gear and yourselves in the vehicle a quicker process.

Make sure to stay stationary. This may sound contradictory to “Don’t be lazy,” but I’ve noticed other hikers on the move along the road towards town or trail will not get picked up as quickly. This may be due to limited pull off areas for the vehicle in mind, and/or maybe the driver just figured you appear able-bodied enough and will make it to where you’re headed eventually. Why bother right?

If you’re a lady, flaunt it! I’m not suggesting breaking out your best hooker impression or dangling your hairy leg out into traffic, but bat those eyelashes in jest and show those pearly whites! Drivers, men and women alike, seem to pick up a female hitcher a little faster than their male counterpart. If you’re a dude, catch a hitch with a lady friend!

In conclusion, travel safe, choose your location and targets wisely, use your better judgement and common sense throughout, and get creative! Don’t be afraid to converse with drivers and passengers as they are usually very interested in your journey and experiences along the way. There are probably many other techniques and words of advice out there, and I encourage you to share them below in the comments section (especially anything creative or funny!). Happy Hitching! 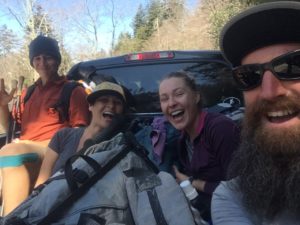 3 thoughts on ““Riding in Trucks with Boys”: A Beginner’s Guide to Hitchhiking”