After spending a little too long out in the so-called “real world”, it was so damn refreshing to meet up with some of my tribe for a multi-day hike on my home trail. To those CDT tram members who couldn’t make it out, you were truly missed and gossiped about… A LOT! 😂 But I’m hoping some of you cross paths with us on the PCT later this year. Good luck Tapeworm on making it over halfway on the AT. 🔥 Enjoy the north. RIP The Doyle. You will do well I’m certain, but I’ll miss the glorious shitshow you once were. How the trail has changed! 🤯
I did a thing today. Probably won’t do it again. But I also said I wouldn’t run 13.1 miles ever again, sooo… 🤷🏻‍♀️Thanks @trevtrevorwhatever for the support, and super rad to catch up with you @wildturkeytrotsthru Thanks for the hospitality!
9/9/21 - Mission Accomplished! 🤘
Montana! You pretty!
Yet again, Montana brought the hiker friendliness in Augusta, and a sweet sunset too! Once we were able to force ourselves to leave, we were off to “The Bob” and finally got to see the Chinese Wall. We’re officially in the heart of grizzly country, y’all! 🐻
The sweet views continued all the way to Augusta!
Had an awesome birthday which I celebrated with my stinky, freeloading #hikertrash tramily, the wonderful people of Lincoln, and Daryl the Sasquatch. The hike from Rogers Pass was just as amazing as the hike into it after we hunkered down in a yurt to avoid the rain. More climbs, but a lot of ridge walking by rock ledges and towers.
No more smoke, but the days have been windy and the nights have been cold. We visited an amazing outfitter in the middle of the trail, got to see Golden, a familiar face from the AT (2016), and lots and lots of cows! I had been in a bit of a funk lately, but the ridge walk right before reaching Rogers Pass snapped me out of it!
Got stuck in the Butte vortex. We hitched in, hitched out, hiked to the north side then hitched back in. Pizza Ranch was our second home. Eventually we made our way to Helena, our second vortex. Before our arrival, we got pounded by hail and rain. The wind was blasting through the trees so hard, they were snapping like twigs behind us. The people of Helena were beyond hiker friendly. We got stuck a second day when a girl working at the brewery let us crash at her place for free, hot tub included! Life’s good!
Posted on May 26, 2017March 31, 2018 by Stubbs

I was super stoked! I’ve been stuck at home recovering for nearly 3 weeks now from my stress fracture, and I got out of the house to visit Frisbee and the trail prior to the annual Trail Days Festival. I haven’t seen him since I got off trail north of Hot Springs, NC and he’s been flying up the trail with several hikers I know and a few I’d soon meet.

It took me over 6 hours to make it to Pearisburg, VA from my home in central Maryland due to the fact that I had to pee at every exit since my bladder is apparently the size of a mustard seed. As planned, Frisbee met me at the Holiday Motor Lodge, one of my favs from last year, not because it’s fancy (heavens no!), but the locals living at the hotel are absolutely amazing!

Some of the hikers were making it to town later that day, and some others were heading in the next. Peanut, who hiked last year with us, was driving there later on since her boyfriend (Cricket) is hiking this year. Backtrack (who hiked with us earlier this year), was driving down to meet up with us too, so we had 3 vehicles to transport some stinky freeloaders to the weekend festivities. Once people arrived, we all headed to the Lucky Star Chinese Buffet to gorge out, got some outfits for the hiker parade at the Goodwill next door, then drank heavily back at the hotel. 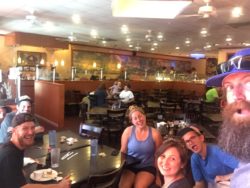 Most of us were feeling a bit fuzzy the next morning, but got back to work (and by “back to work,” I mean we drank some more). 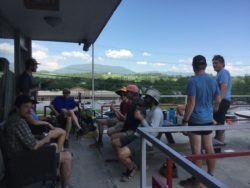 The highlights of the day were sprucing up the room…

…taking a dip in the pool, listening to what I can only describe as a ‘tornado warning’ siren being set off several times throughout the day even though the weather was great, someone driving a house down the road, and a truck with a rebel flag strapped to it peeling wheels through the parking lot. I crashed a little earlier than most of the others, so I missed out on some hikers (that we didn’t know, mind you), behaving badly by peeing off the balcony and keeping the locals awake all night (not cool).

The ones not completely wounded from the night before loaded up in my car to head down early to Damascus, VA to try to reserve a section in Tent City. Frisbee and I were bummed that we didn’t get the same spot we had before since several people already claimed it, but found plenty of space (and rocks), nearby. 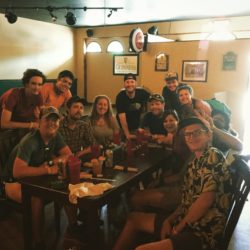 Afterwards, we showed the rest of the crew where we set up, ate some grub at Bobo’s, then we hitchhiked (because I didn’t want to lose my parking spot and because it’s more fun that way), to Food City to get beer and ice. Odie, who makes the Hiker Yearbook took us back to Tent City in his bus since he happened to be passing by.

Peanut brought a canopy to rainproof our area which made my tarps look sad in comparison. We set them up to semi rain-proof our camp, then wandered around. Frisbee and Tink (a friend from last year), would later spank Gumby and me at some cornhole. 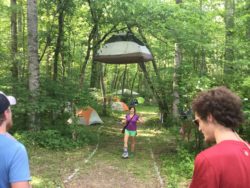 Trail Days officially kicked off! A bunch of friends who hiked with us last year showed up.

Wokman, who hiked with us last year and our first three days this year, had set up at our old site. So we carried his pitched tent to the new one. A few of us headed to “It’s a God Thing” thrift store to doctor up our parade outfits.

I was determined to win something at the Hyperlite Mountain Gear raffle this year so, a few of us headed over there when it began. I tried the push-up contest, with my air cast and all, but only could do about 30 of them. The winner did about 70, so I couldn’t compete. I was bummed, but got lucky near the end of the raffle when my name was called for a Stuff Pack (a step up from the stuff sack that I was hoping to win). Later, there would be the usual shenanigans at camp, and the massive bonfire set up by Riff Raff at night.

It’s the day of the hiker parade and I’m thrilled! I got my granny on and most everyone had on amazing outfits. 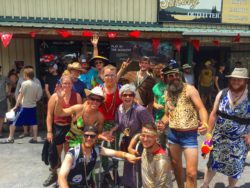 As always, the locals got out their water guns to spray us off as we walked by. I was an easy target as you can imagine! Near the end of the parade, the water guns were the least of our worries as it started to downpour. We were all drenched, and most of us headed back to Tent City, while a couple others took advantage of the limited presence of people at the raffles. PCP showed me up by winning a tent at the Hyperlite raffle. Funny thing, I told everyone we had been hiking with that she would be more ultralight than all of us by the end of the trail. My prediction is looking promising! A few of us went to the Backpacker Magazine raffle where some of us got some free stuff thrown our way and others modeled my granny wig for me. 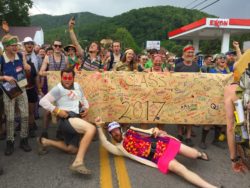 Trail Days was a blast as always! We loaded up the cars and headed back to the hotel in Pearisburg where we would stay one last night. Little Brother and Admiral who hiked with us last year would be joining Frisbee for a while on the trail, which is awesome! It was tough saying goodbye again to Frisbee and the crew, but I know it won’t be too, too long before I’m back out there with them again.

One thought on “The Dirt on the Trail: Chapter 4.5”