Originally posted on The Trek on August 23rd, 2016

During your AT hike, you’re going to have to decide where you’re going to sleep at the end of the day (or the start of it if you’re a night hiker). Some people prefer the seclusion of their own private tent/hammock/bivy. Others gun it for the shelters (also called huts or lean-tos), every morning like a trail version of the Amazing Race hoping that a spot is available upon their arrival. There are many reasons to shelter up or to avoid them like the plague (no mouse pun intended!), and even if you prefer sleeping in your own device on the regular, there is a time and place where shelter sleeping is preferable depending on various factors.

Pros of the Shelters: Depending on your particular mood, the crowds can be a blessing or a burden whether you choose to sleep in the shelter or just want to be around it. After a long hike, a little distraction is nice from the aches and pains of body and hunger. My husband and I called it, “watching television” as we sat in shelters watching the night unfold.

You meet a lot of interesting characters and it’s nice to socialize after a day of being stuck inside your own head. It’s also nice to kick back and read through the log books for some added entertainment, advice, warning, and to read where your new found friends are planning on heading off to.

Cons of the Shelters: The Crowds! Maybe you just want to be alone after a tiresome hike, and the late arrivers gathering around the shelter to cook their pasta sides and ramen noodles are doing nothing but keep you awake when you’re exhausted and just want some shut eye.

In this case, find yourself a good stealth site. Depending on the people around you and the strength of your immune system, being in tight quarters can increase your risk of viruses (Norovirus, aka the stomach bug), if there’s an infected bunkmate. Other irritants may be the people who snore at the same decibel as a jet engine, in your ear no less, or those who insist on sleeping in the opposite direction as you who keep farting in your face.

Some shelter goers may be missing home a bit too much as my husband was awoken by an older gentleman spooning him in his sleep (awkward!). Some people lack basic shelter etiquette as well, and may step all over your sleep mat while wearing their camp shoes, or may hang their 50 lb. pack on a nail directly over your head. You can only pray that nail is strong enough or else you may get an unwanted midnight surprise! Early risers may bother you if you are the type to sleep in, although you can’t really blame people for wanting to get a fresh start. If any of these cases seem intolerable and not something you may be able to laugh off later on, find yourself a nice little tent site!

Pros: There is nothing like finding availability in the shelter when it’s cold! You don’t mind cuddling up to strangers at this point because that body heat = feeling like laying in a basket of kittens!

Equally awesome, is shelter slots when you’ve been rained on all day or pounded with snow and you either don’t feel like setting up in the bad weather or your gear is already soaked. It’s one less thing to stress over when you’re already bummed out about the weather.

Cons: Cold can also be too cold however, and heat can be even more uncomfortable to sleep in when laying in a shelter full of sweaty hikers. You may also have the false security of finding shelter from an incoming storm only to find out when it arrives that you parked yourself under the one hole in the roof. Your attempts at keeping dry have failed you miserably!

Pros: You have one wall open to enjoy the fresh air nature provides, and can get naturally awoken by the sunrise to get your day started.

Cons: Starting with the obvious, MICE! Those little bastards will be keeping you up all night scurrying around trying to pick up every dropped crumb from everyone’s nighttime meal. They’ll also be scurrying around your gear as well looking for food and good smelling toiletries not properly placed in your bear bag. They’ll chew through your pockets if they suspect something yummy is inside and will poop all throughout your bag if they investigate it. If you’re really lucky, a ballsy mouse might scurry across you! Hooray! Or maybe you weren’t very attentive at where you parked your gear in the shelter and wake up covered in bird poop from the discreetly placed bird’s nest.

Then, there’s the situation where someone didn’t properly hang their food bag and now you’re woken up by every little noise for fear a bear might mistaken you for a burrito as you lay out as easy pickings. Did I mention the bugs? When the weather warms up, you may hear less from the mice (the snakes are on the prowl doing good deeds), but the mosquitoes, no-see-ems, and biting flies are in full swing! If you’re in the safety of your tent, you won’t have to worry about them.

Pros: The shelter may be conveniently located along the trail which makes for a quick start in the morning. It may even be located close to town so you can run out to get your resupply and maybe bring back some cold brews or hot food to make for a relaxing nero (with a long morning in the privy!). The shelter might come with perks like swinging benches, a loft, even a solar shower or board games. These things can make for an enjoyable evening versus a secluded camp site.

Cons: Perhaps the closest shelter is far from the trail. This would be an ideal time to find yourself a stealth spot. That is unless you’re in the Smoky’s where ridge runners will force you to sleep in a shelter regardless of how close or far the nearest shelter is from trail or proximity to you. Sometimes the condition of the shelter sucks altogether too. In the Smoky’s, I had to pleasure of sleeping in a couple shelters which had massive cracks between the floorboards, which wasn’t a big deal to those on the upper level, but for me on the bottom, it was miserable. I had to position my head out from the floorboards, risking my face being stomped on by those above, so I wouldn’t have mud, dust, and possible rodent droppings falling on my face every time someone up top moved. Some leak during bad weather as mentioned earlier, and others have gaping holes on them which are now corked up with plastic bags or various other found objects.

Sometimes the floor is warped or has holes in it as well which results in a rather drafty and uncomfortable night’s sleep. Times like these, you can only hope that there’s a decent amount of available tenting areas so you can make an escape route.

Personally, I enjoyed sleeping in the shelters, even though I am quite the light sleeper. At home, I tend to keep to myself, but have found myself to be more extroverted on the trail, and I enjoy the company regardless of the cons. What may be unpleasant or crappy at the time (whether it’s the company, the weather, the critters, etc), tends to make great conversation down the road, so I do my best to embrace the good and the bad in the hopes I’ll be laughing about it later. 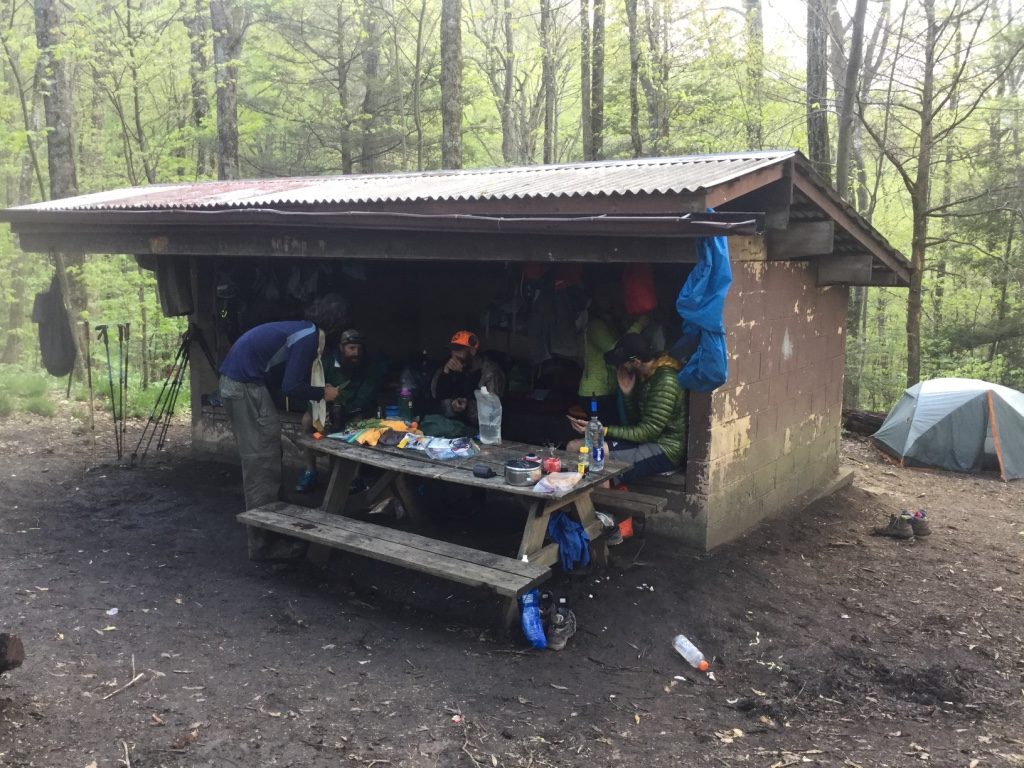 However, to each their own, and some of these cons may be out of the question. In that case, find yourself a little privacy on the trail, curl up in that hammock or in a tent with a companion (preferable one who doesn’t snore or fart too much in their sleep), enjoy the sounds of nature (but keep unwanted wildlife away by properly hanging your food bag), and keep dry. Enjoy the seclusion, or at least know when some alone time is due when your mentality requires it! What do you prefer most? Shelters or privacy?