Destination: Pharmacy
The antihistamines I took overnight helped prevent further swelling, but I still had a cankle. We passed by Shenandoah Mountain which was painted with a 911 Memorial Flag, then took a break at Ralph’s Peak Hiker Cabin for a lunch break.

The privy was nicely decorated.

The trail made a detour up a steep road, so we regretted not filling up on water at the cabin, since we hiked around the water source and it was a scorcher. On top of not having enough water, it was super buggy.
We eventually made it to NY 55 where we got a hitch from a nice German man in an old Mercedes into Poughquag, NY. He took us to the pharmacy where I got my meds for my wasp sting and we ate Chinese food next door.

It was late and getting dark out, so we had doubts on getting a hitch back to the trail. We got lucky when two dirtbaggers returning from climbing at the Gunks decided to pick us up. We walked to the side trail, set up our tents, then listened to the rainstorm overnight.

The AT Railroad and Pawling, NY
I saw a huge green frog and about 10 red-spotted newts along the trail after walking around Nuclear Lake the next morning. 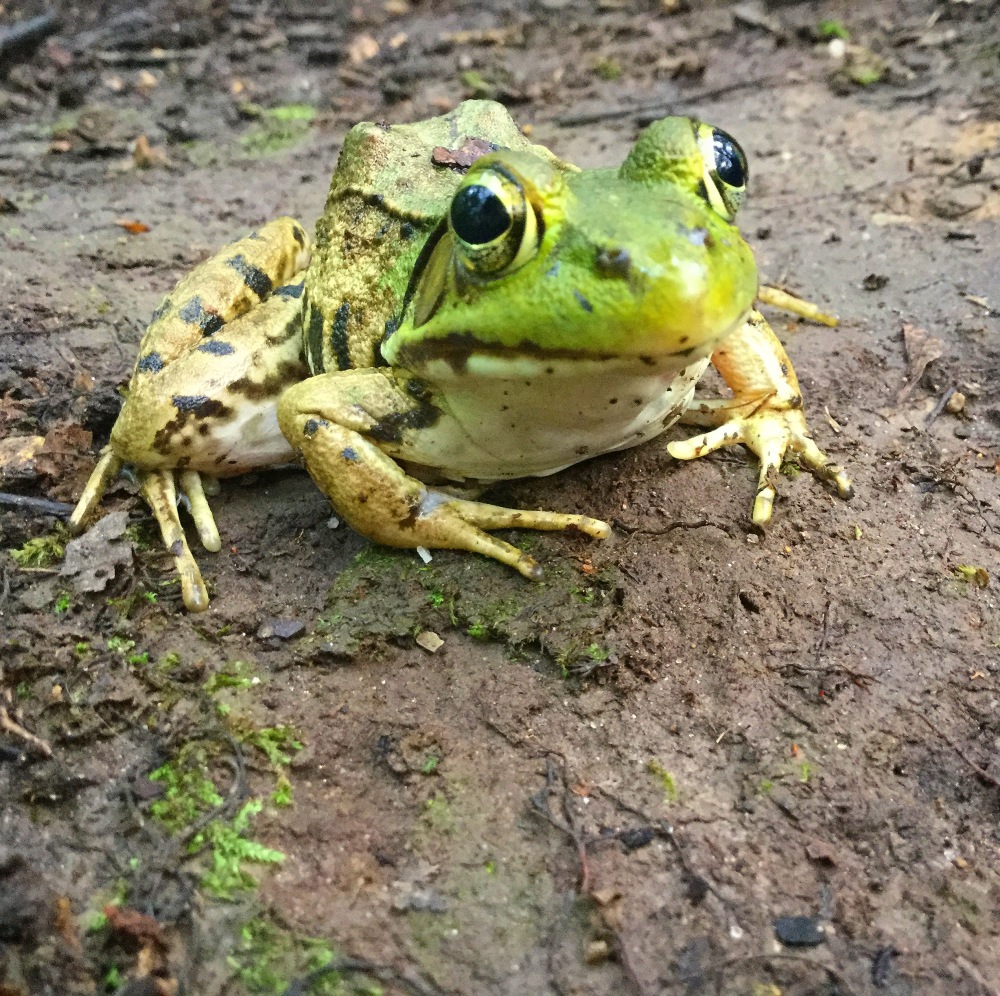 The scenery was nice on the Boardwalk as I approached the AT railroad station to meet up with Frisbee and Gumby before hitching into Pawling, NY. 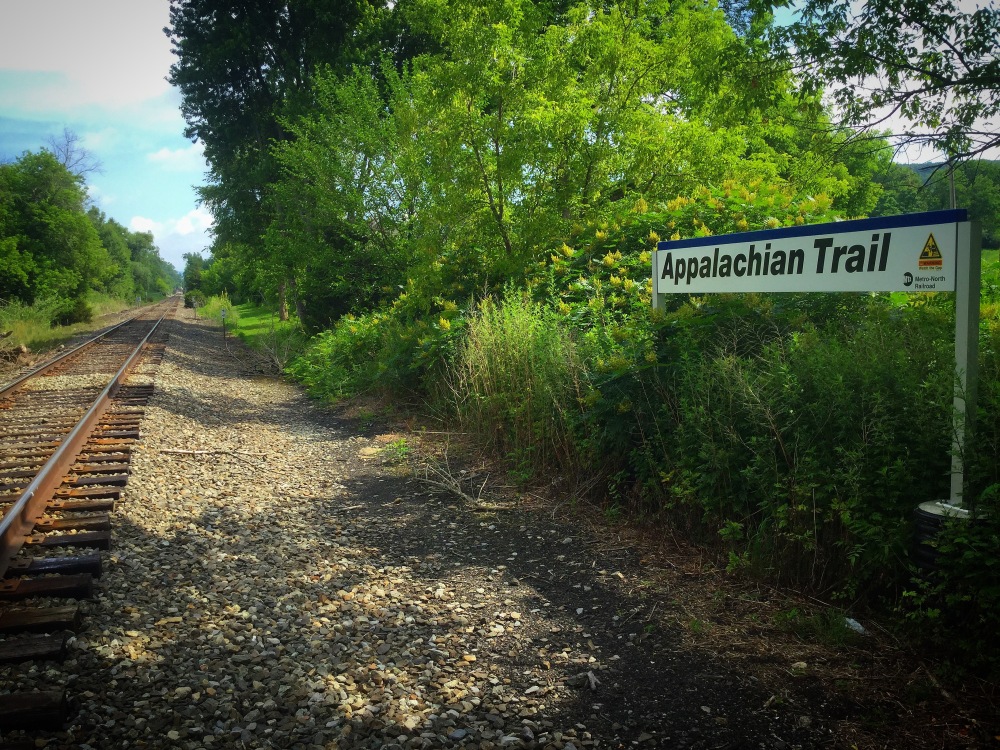 The town was nice and friendly. We got breakfast burritos, did laundry, indulged in a chocolate milkshake and pizza, then resupplied and hitched back to the trail. It was looking like rain as we passed the wooden water tower and reentered the woods.

I felt like I was trying to outrun a tidal wave as a rainstorm quickly approached me from behind. It died down once I made it to Wiley Shelter.

Now Entering Connecticut
I was not surprised that one of the last NY blazes was hidden behind a street sign before I crossed the border into Connecticut.

The beginning stretch of the trail was beautiful. The trail followed the river and under conifers followed by a steep climb to a view where we took a break.

We hitched into Kent, CT to pick up our drop boxes from the post office. It started to rain so we took cover near the library to waste some time using their WiFi. After the rain stopped, we grabbed overpriced milkshakes and hot dogs, then got a hitch back to the trail.

Shortly after passing Macedonia Brook, we found a stealth site at the top of the hill. 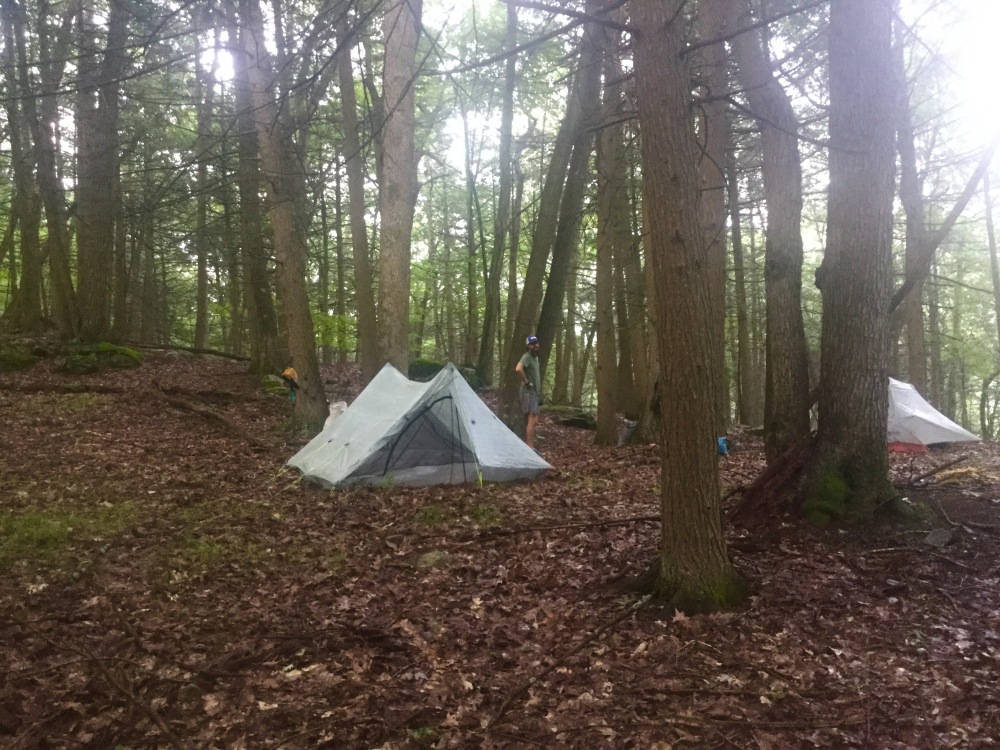 There was a super steep climb down stone steps to the Housatonic River.

We passed by some YMCA rock climbers before reaching the gravel road. We had lunch at Stewart Hollow Brook Shelter then hiked on into a rainstorm. Eventually we made it to Caesar Brook campsite where there was a box with a toilet seat attached to it as a privy (I would’ve taken a pic if it weren’t raining; it was amazing). We ate dinner in the rain, then went to sleep.

A Foolish Nero
It was dumping rain the next morning and the forecast was looking like rain the rest of the day. We took a break at Pine Swamp Brook Shelter which turned into a Nero. We blew up our sleep mats and, of course, the rain stopped. It never ended up raining until the middle of the night. I hope all the hikers that passed us that day appreciate our sacrifice. Our sleep mats stopped the rain.

Salisbury, CT
It was a foggy morning and the terrain was pretty mellow. We grabbed soda from a vending machine found outside of a closed auto shop, then made our way over the Housatonic River to the park to dry out all our gear and eat lunch.

We hung out a while watching people with kayaks and canoes enter the water, then I hiked on passed great falls. The guys caught up and we took in Rands view before hitching into Salisbury, CT in the back of a landscaping truck.

We stopped in LaBonne’s Market to resupply then hung out with a bunch of hikers out back. Some of us got a few beers while listening to music blasting from a nearby apartment.

Frisbee complimented the guy for his tunes and he offered us his shower. We’d chat more with him later. His name was Jesse and he was housesitting while his friend was in recovery after relapsing. He was super nice and would let us sleep on his floor later. After more drinks and lots of French fries across the street at The Lockup, we headed back to Jesse’s and crashed with Lil Wayne and Bobo.

2 thoughts on “The Dirt on the Trail: Chapter 7”