After spending a little too long out in the so-called “real world”, it was so damn refreshing to meet up with some of my tribe for a multi-day hike on my home trail. To those CDT tram members who couldn’t make it out, you were truly missed and gossiped about… A LOT! 😂 But I’m hoping some of you cross paths with us on the PCT later this year. Good luck Tapeworm on making it over halfway on the AT. 🔥 Enjoy the north. RIP The Doyle. You will do well I’m certain, but I’ll miss the glorious shitshow you once were. How the trail has changed! 🤯
I did a thing today. Probably won’t do it again. But I also said I wouldn’t run 13.1 miles ever again, sooo… 🤷🏻‍♀️Thanks @trevtrevorwhatever for the support, and super rad to catch up with you @wildturkeytrotsthru Thanks for the hospitality!
9/9/21 - Mission Accomplished! 🤘
Montana! You pretty!
Yet again, Montana brought the hiker friendliness in Augusta, and a sweet sunset too! Once we were able to force ourselves to leave, we were off to “The Bob” and finally got to see the Chinese Wall. We’re officially in the heart of grizzly country, y’all! 🐻
The sweet views continued all the way to Augusta!
Had an awesome birthday which I celebrated with my stinky, freeloading #hikertrash tramily, the wonderful people of Lincoln, and Daryl the Sasquatch. The hike from Rogers Pass was just as amazing as the hike into it after we hunkered down in a yurt to avoid the rain. More climbs, but a lot of ridge walking by rock ledges and towers.
No more smoke, but the days have been windy and the nights have been cold. We visited an amazing outfitter in the middle of the trail, got to see Golden, a familiar face from the AT (2016), and lots and lots of cows! I had been in a bit of a funk lately, but the ridge walk right before reaching Rogers Pass snapped me out of it!
Got stuck in the Butte vortex. We hitched in, hitched out, hiked to the north side then hitched back in. Pizza Ranch was our second home. Eventually we made our way to Helena, our second vortex. Before our arrival, we got pounded by hail and rain. The wind was blasting through the trees so hard, they were snapping like twigs behind us. The people of Helena were beyond hiker friendly. We got stuck a second day when a girl working at the brewery let us crash at her place for free, hot tub included! Life’s good!
Posted on August 15, 2017March 31, 2018 by Stubbs

We dropped the van off at the auto shop, then went with Trevor’s parent’s to the Battleship Memorial Park where we observed the many memorials, fighter jets, planes, helicopters, tanks, and the USS Battleship Alabama.

After that, we drove to the Flora-Bama bar which rested on the Florida-Alabama border and split a yummy, yet unreasonably priced $10 burger before strolling along the beach. 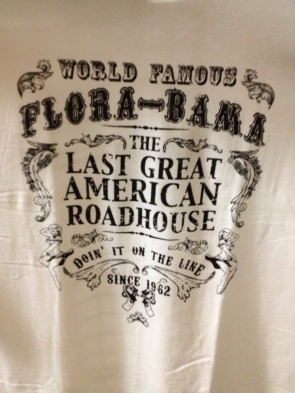 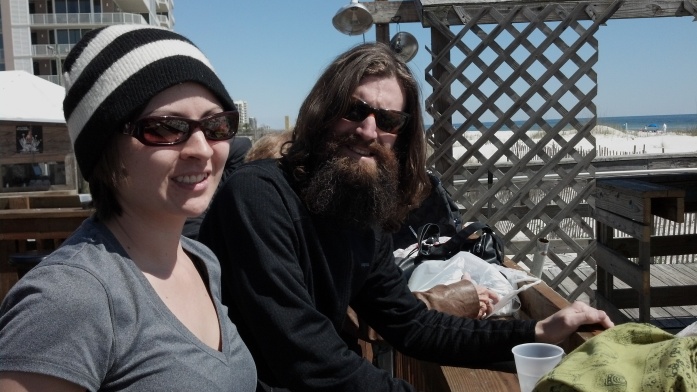 We made a couple stops to look at some shops on the way back to Mobile, and got a phone call from Pam that the van was fixed! Apparently, the guys in Johnson City didn’t put all the bolts in the replaced pump and it only cost $35 to fix. Good news was followed by bad when I got a call from my mom who informed me I received a “merchant alert” in the mail stating my debit card needed to be replaced. Fortunately, my account wasn’t wiped out, but it meant having to wait for a replacement which my mom was kind enough to mail to me in Mobile. All complications aside, Robby fixed us all up a good meal for dinner, and we were all excited to head out to New Orleans the next day!

More leaking from the van in the morning (Do I sound like a broken record yet?). We returned the van to the shop to have him put in another plug. We had our fingers crossed hoping it would be the last time we’d have to worry about it since we had a very long journey ahead of us and didn’t want it to be cut short. We all headed to Mississippi since Robby had a family vacation home in Diamondhead, conveniently located right outside of New Orleans. We had a short Frisbee session in flip flops in the yard before we all headed to “The Big Easy!” 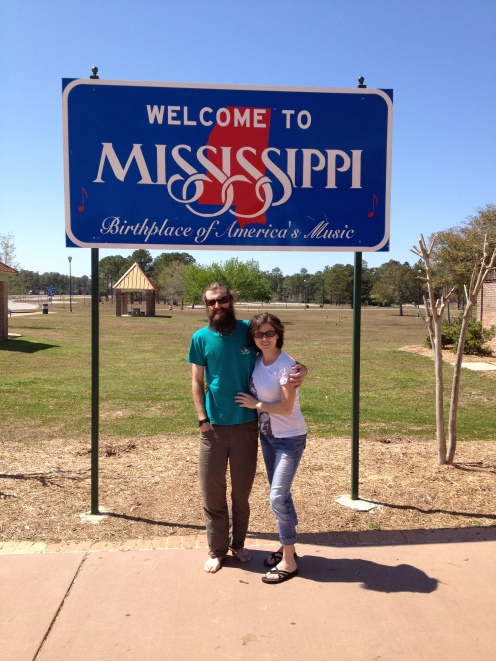 I was excited, but was afraid of giving into temptation as New Orleans is a drinking town. We watched people filming a vampire movie after going to Pat O’Brien’s, the home of the Hurricane, a beverage I unfortunately wouldn’t get to enjoy this time around. As we passed along Frenchmen Street, I noticed that Kermit Ruffins and the BBQ Swingers were performing later at the Blue Nile. I wanted to see him really badly although no one else seemed to share my enthusiasm, and so we paid for everyone’s ticket to go. It was a bit of a long wait until they started, but it was an awesome performance!

After eating a tasty pineapple pork burrito at Café Negril, we headed over to BMC (Balcony Music Club) to watch Robby’s friend’s band, John Lisi and Delta Funk. They were amazing!

We wanted to take a break from all the cigarette smoke in the club (both of us had recently quit), so we went to get a cup of coffee from Envie Café. On the way there, a gutter punk jumped in my path and showed me his bum. He seemed disappointed, almost embarrassed, that it didn’t phase me. Sorry buddy! It takes more than a pair of butt cheeks to shock me. We caught the end of the show before the awesome Lagniappe Brass Band started their act. It’s truly impossible to go to a small venue in New Orleans and see a shoddy performance. There’s just too much talent!

It was getting pretty late and I was getting back pain from my not-so-wise choice in flip flop footwear for an evening of walking around and standing, so we grabbed a key from Pam and headed back the Diamondhead.

Another Frisbee session was had before we all headed back to “NOLA.” Pam and Robby were much quicker to find a parking spot, so by the time we got situated, they had a Muffuletta picnic (courtesy of Central Grocery Co.), waiting for us by the levee.

If you’ve never had a Muffuletta, you should get one there. It’s a large round sandwich (big enough for 2-4 people), on sturdy sesame covered bread. Inside there’s olive salad, mozzarella and provolone cheeses, ham, salami, and mortadella. It’s amazing! They deliver them nationwide if you’re dying to try one and don’t want to make the journey there.

It was a Saturday and also St. Patrick’s Day weekend, so it was super crowded! Trevor and I went shopping for some artwork. I was looking for something fun and original, but not too pricey. We started in the French Market, then checked out the Dutch Alley Artist’s Co-op, then wander around Jackson Square. While in the Dutch Alley Artist’s Co-op, I saw, “THE ONE.” A painting done by New Orleans native, Stuart South of Godzilla over Jackson Square. I loved it, but I would have to return for it later.

We grabbed a coffee and went to Michael’s Bicycles so Trevor could look for shoes and a bike fender. I was completely star struck upon entering the building. I’m not one to care about celebrities (I find the obsession that many have over them to be quite bizarre), and maybe he’s not an A-lister, but I saw the “Brodie man” himself, Jason Lee in front of me! Most might know him from “My Name is Earl,” few might know him as a pro-skateboarder, but the cult classic “Mallrats” was probably one of my favorite movies growing up. I didn’t bother him, but had a tough time trying not to look in his direction as I likely looked a strange combination of manic and brain dead at the time.

We returned to the party in Pat O’Brien’s and eventually convinced everyone to venture out to do some bar hopping, which just resulted in mass confusion. We ended up on dreaded Bourbon Street (aka: tourist chaos), and kept losing our people who wandered off for random bathroom breaks and sightseeing. I hated to be a downer, but when you’re sober amongst a bunch of drunk people, it’s like herding cats.

We got away from Bourbon Street, which is great to stroll through, but not to spend too much time on unless you want to empty your wallet. Robby stopped us all to listen to a busker named Stoney B. Blues, and I’m glad he did. He told us about his travels performing across the U.S., and how he’s landed free places to stay on occasion. He sang his versions of Hall and Oates’ “Sara Smile” and Son House’s “Death Letter Blues.” Robby (a musician himself), even had a go at playing the guitar.

We went to Evie’s coffee while everyone else headed to Molly’s at the Market. On our way back, we overheard gutter punk conversations discussing the smell of wolf piss. Don’t ask me, what that was about.

Start Over at Part 01: The Blue Bubble, Freebies and A Rude Awakening