Oops I did it again! 🤭 Canada 🇨🇦 to Mexico 🇲🇽 - (complete November 5th)! But this time I accomplished something less than 600 people have done; I finally received my Triple Crown! 👑 👑 👑
We heard drum and bass by the forest road and I knew immediately who it was! 😂 JeffR with his magical timing tracked us down and gave us trail magic before we made our way towards Warner Springs. It was awesome seeing you @jeff_rrrr ! The next day, I had to do my best “NeverEnding Story” impression when we reached Eagle Rock. That’s how this whole journey has felt. We saw a tarantula, ate incredibly well in Julien (the most hiker friendly town on trail), saw birds and planes on our way to Mount Laguna, got slapped with crap weather and slept in a flooded pit toilet to avoid freezing to death, then we were treated to champagne by the lovely owners of Pine House Cafe & Tavern in Mount Laguna. There’s been so many ups and downs on this thru hike and I’m pretty tired. I’m ready to end this chapter of my life and do new and different things. Onward to Mexico! 🇲🇽
It was a long, never ending climb towards Mount San Jacinto. At least our hard work was rewarded with a super cool hiker town the next day. Idyllwild was a blast! Especially since two of our CDT brothers, Coffeebreak and Tapeworm came out to hang with us. Whiskey Mama misses you guys already! 😂 Tape even hiked with us a bit the next day and took us to get Mexican food afterwards. 🌮 We were grateful to have some reliable water sources the next day as we headed towards Warner Springs. 💦
We stayed at the cabin to avoid the cold, then had some scenic desert climbs. The next day we passed the Whitewater Preserve. While walking through the Mesa Wind Farm, we caught a glimpse of the SpaceX rocket launch. Frisbee and I had seen the satellites fly by earlier on trail while going through the Sierra. We were stoked to get a ride to In-and-Out Burger and Taco Bell where we got to hang with our homie Tapeworm! It was awesome seeing you @doslove_ ! Later that night, we stopped a little distance after going under the overpass.
Had a great experience in Wrightwood and avoided the cold weather thanks to trail angels Emily and Dan! Everyone was so hiker friendly there! We took an alternate where walked to Cajon Pass the next day. Then we saw a lot of birds and coyotes the following day as we passed through Silverwood Lake and passed the dam near Hespia. Before night hiking passed the dam, we got a ride to Joshua Inn for hot subs and cold beer. The trail went from dry to green and lush as we took it towards Big Bear Lake. Less than 300 miles to go!
These trail towns keep getting friendlier and friendlier! The folks at 49ers Saloon in Acton were wonderful, and we got a ride in one of the cop cars used in the “Fast and the Furious” movies with Kevin who gave us a little Hollywood tour as he drove us back to the KOA. He showed us Tippi Hedron’s big cat sanctuary that drunk drivers have driven into by accident, a shack used in “Sons of Anarchy”, a property storing a gas station, motel and other things from Route 66 that are rented out for film, and rattlesnake filled gold mines. While taking an alternate toward Mount Baden-Powell, we met a pair of super rad Trail Angels, Loo (a NOBO PCT hiker) and Gabe. We hit the summit during a high speed wind advisory, but managed not to fly off the mountain.
Our alternate was pretty scenic and I acquired a license plate just as I did at the end of the #cdt. We were treated kindly in Agua Dolce and enjoyed the beautiful rock formations of Vasquez Rocks first thing in the morning. Vasquez Rocks and other areas around Agua Dolce have been used as a backdrop for dozens of movies and TV shows: Nope, Westworld, Star Trek, Blazing Saddles, Twilight Zone, and the Lone Ranger to name a few. This section of the PCT is gorgeous! 😍
With road walks come sun exposure and bizarre finds. After hiking through a massive wind farm out of Tehachapi, we made our way towards the LA aqueduct. Hikertown was welcoming, especially Neenach Market. Water is scarce so we took an alternate to Green Valley, which was even more hiker friendly! Saw a lot of awesomely strange things on the way in and out: bizarre statues on burnt down property, an ostrich farm, cool Halloween decorations, and my first bobcat on trail! The desert is weird and I love it!
Ah, I’ve missed the smells, sounds, and sights of the desert. The sunsets are extra special too! Trail Angels have been awesome by keeping us hydrated via water cache and Rolling Rock 😂 I’m so grateful for everyone’s kindness and support. After we started our journey through the wind farm, we reached the highway and got a ride into Tehachapi. Had fun at The Doghouse Saloon, a local biker bar, and the Apple Festival the next morning. Water has been limited, but we’re getting by.
Posted on August 17, 2017October 29, 2019 by Stubbs

Originally posted on The Trek on August 6th, 2017

Stratton Mountain and Gloomy Weather
It rained a little overnight and off and on throughout the next day which gave us the full blown “Vermud” experience that we’ve all heard of. It was impossible to avoid flooding your shoes. 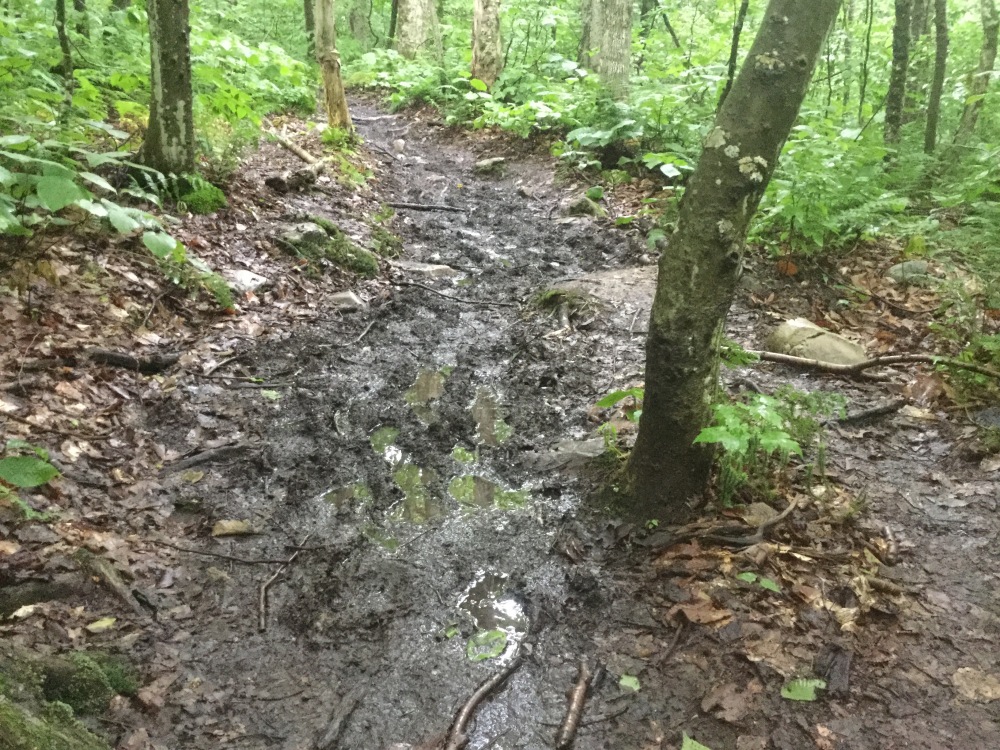 We made the climb up to Stratton Mountain, a site which has inspired the creation of both the Long Trail and the Appalachian Trail. The weather was windy, rainy, and foggy, so we missed out on the view from the Lookout Tower, but it was a lot of fun making the climb to the top while risking being blown away. 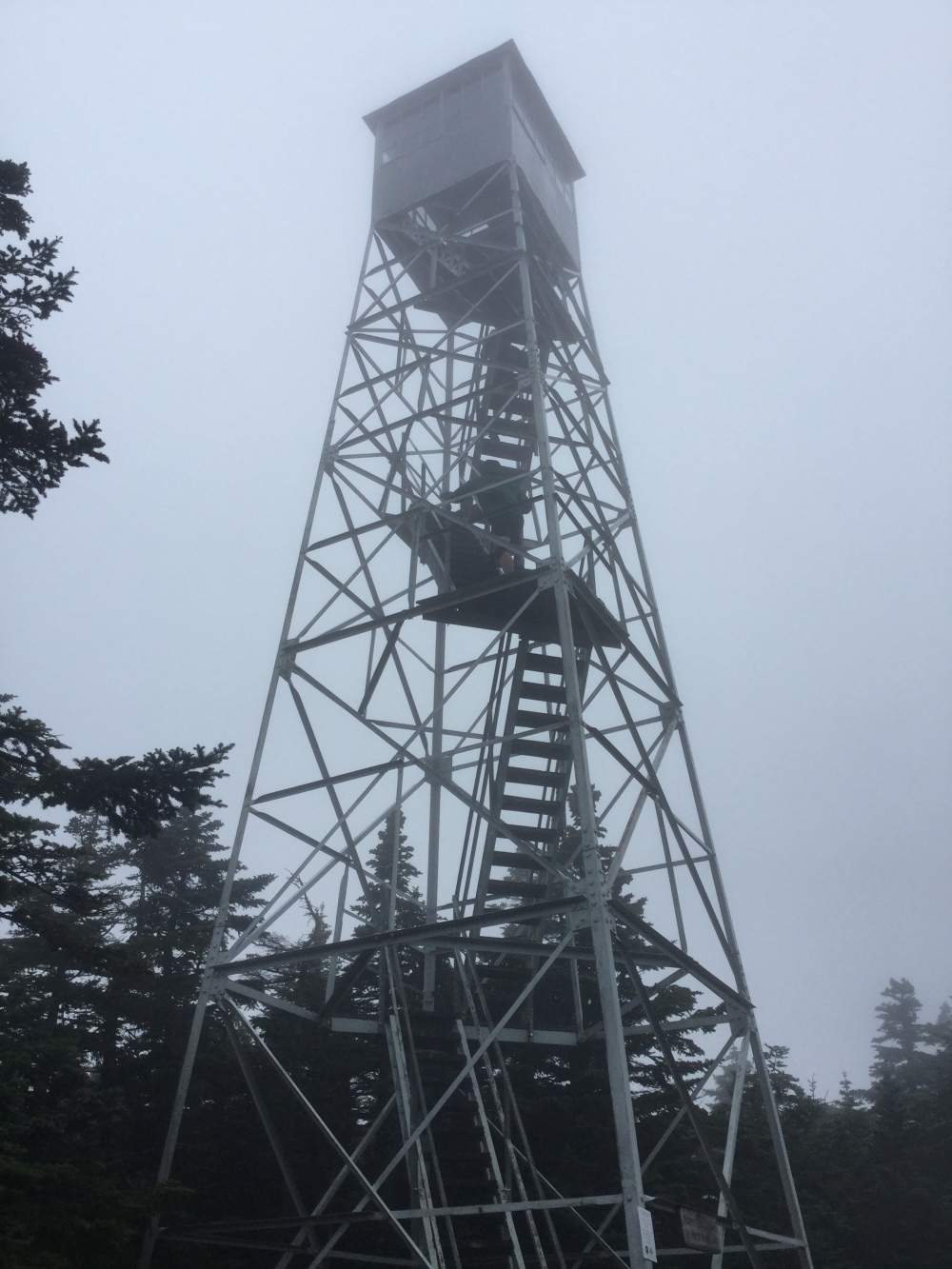 The weather wasn’t the most pleasant, but the fog made the forest look equally spooky and captivating. 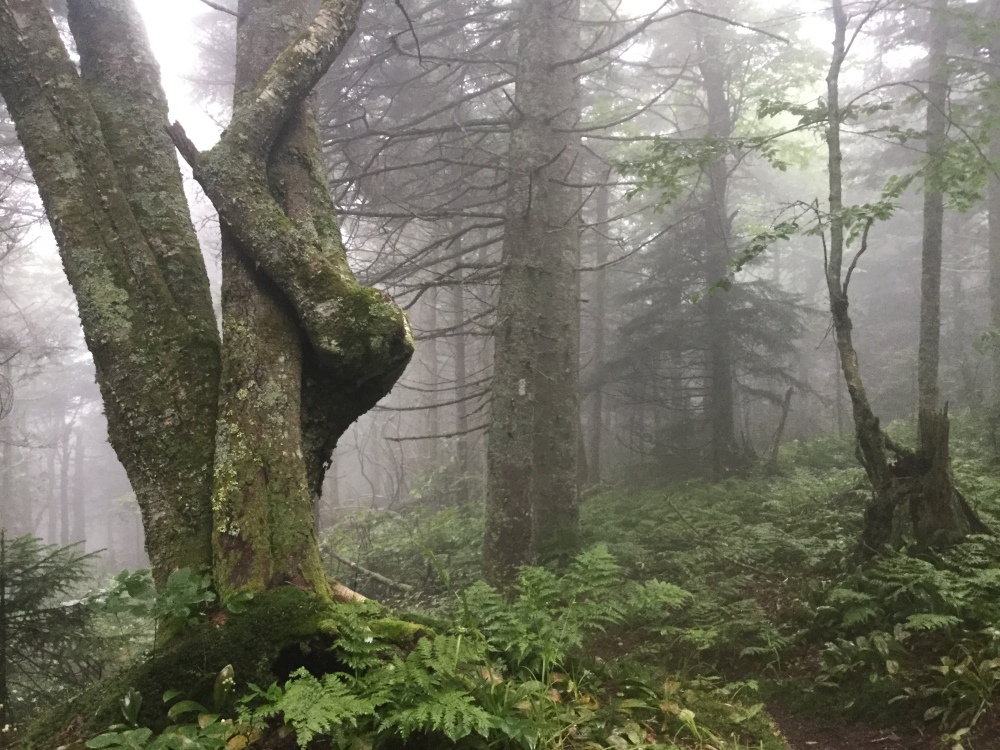 We weren’t trying to pay to stay at a shelter where we would hear people snore all night and wouldn’t get sleep, so we bypassed Stratton Pond and its shelter in search of a stealth site. 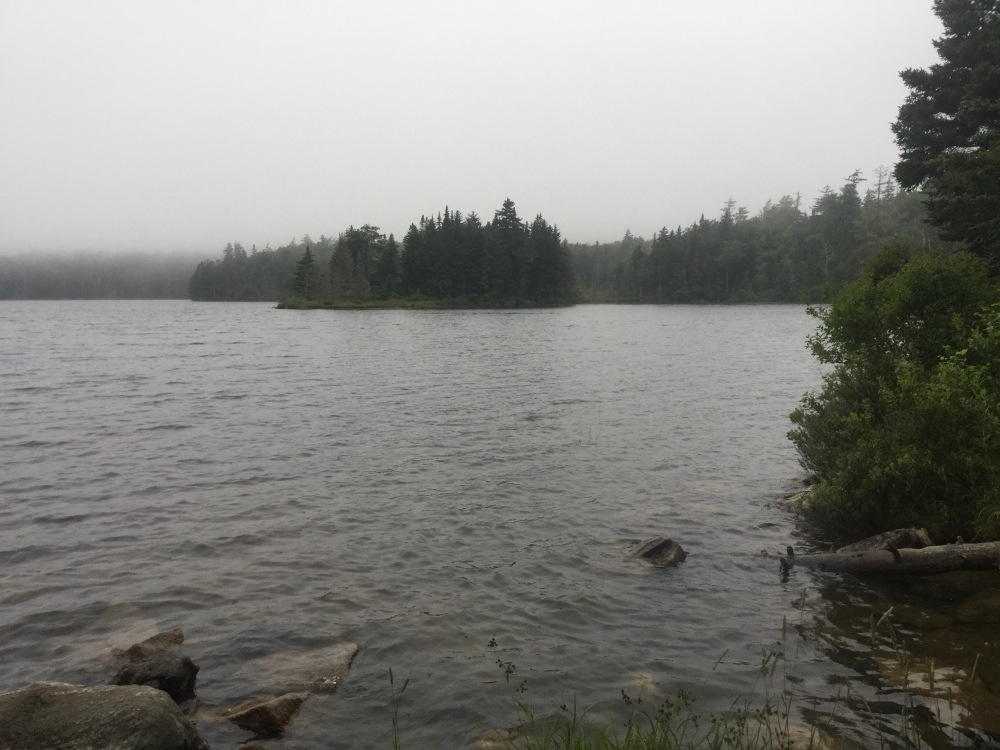 Fortunately, the rain stopped and we found a site 2 miles later.

Bromley Mountain
There was a lot of rain throughout the night, but it was over by the morning. It was foggy up until noon so the scenery was limited. 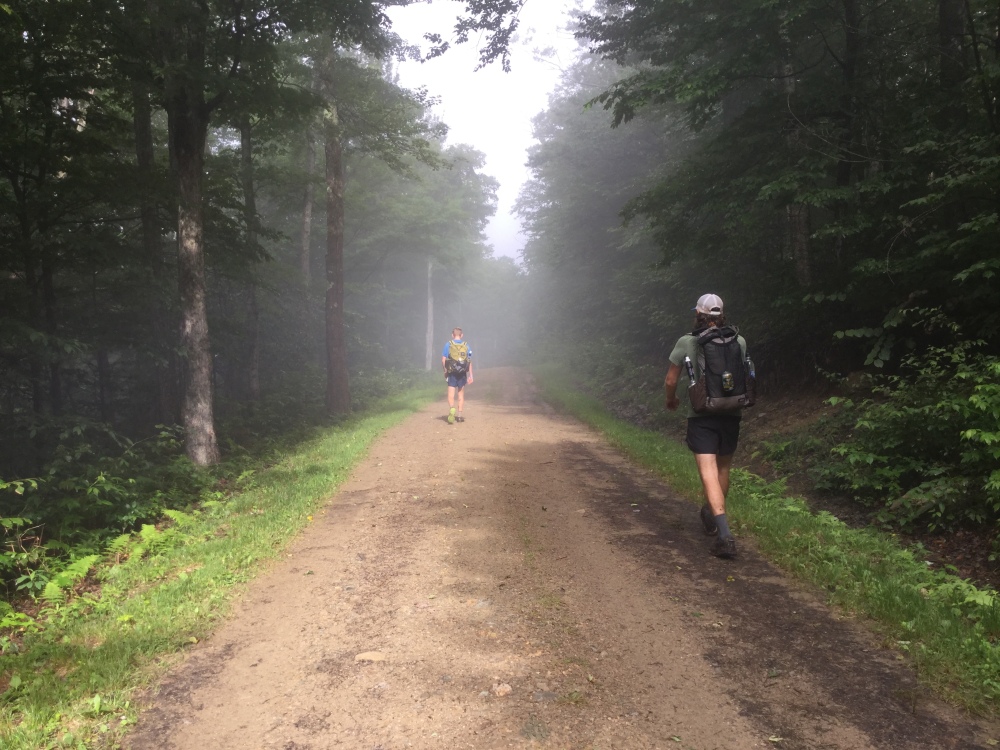 We hitched into Manchester Center, VT and ate some good grub at Thai Basil. 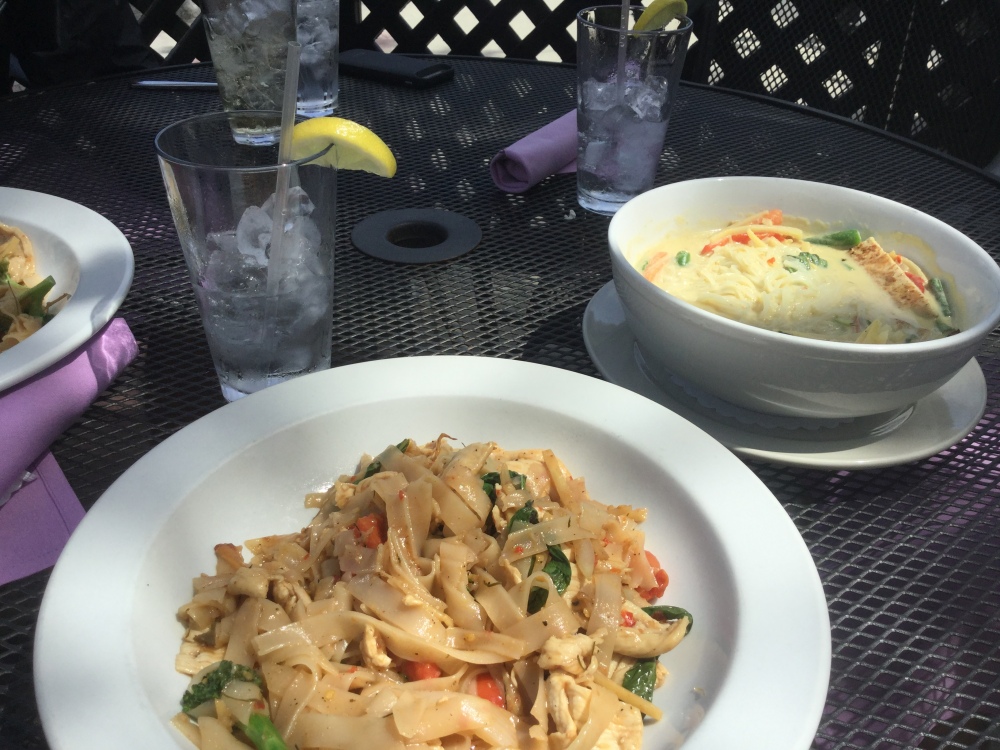 After charging our electronics at McDonald’s and resupplying at Price Chopper, we hitched back to the trail with a woman whose two sons thru hiked in the past. It was a short hike up to Bromley Mountain where we stayed at the ski warming hut for the night. The flies were biting, but the views were amazing! 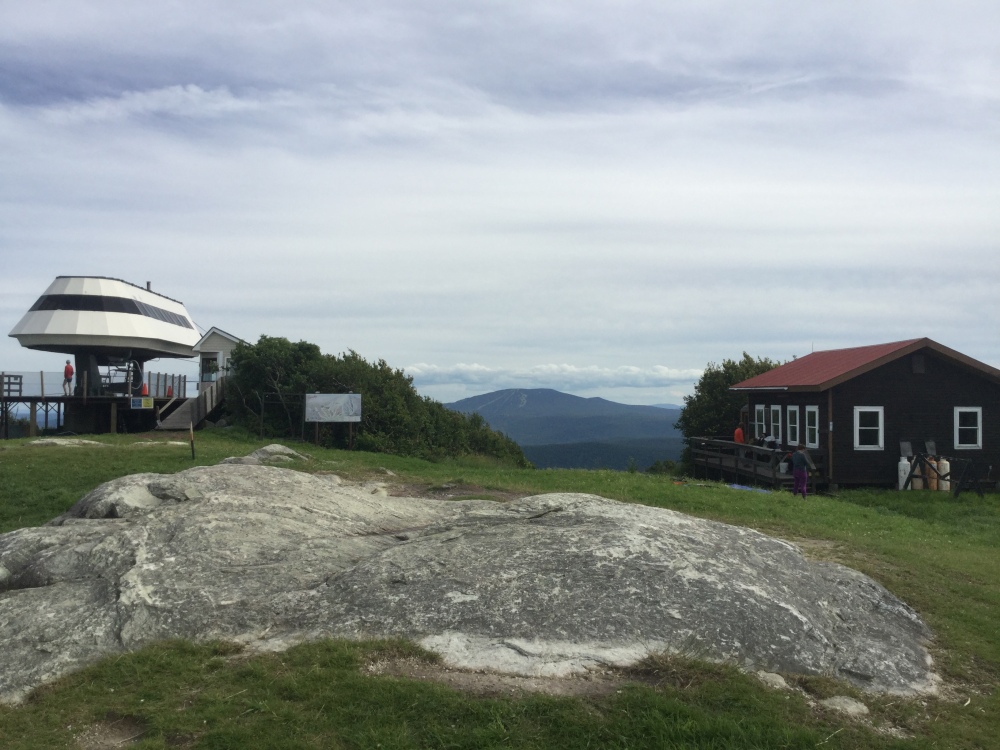 We were excited to see Cricket catch up to us, and we spent the evening climbing around the ski lifts and watching the sunset. 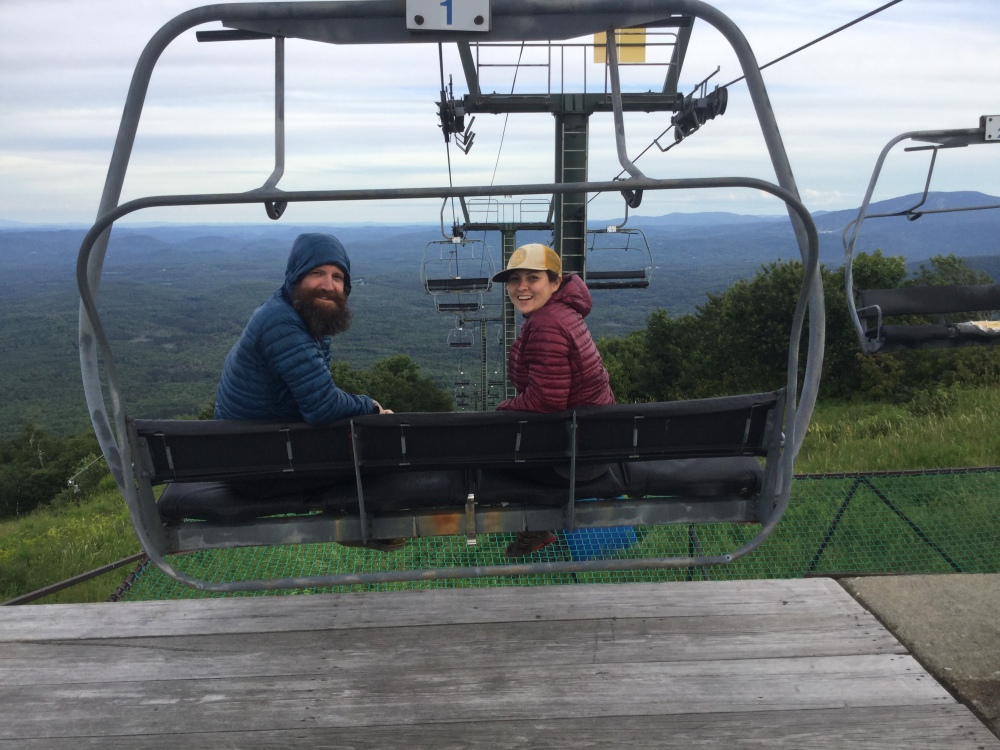 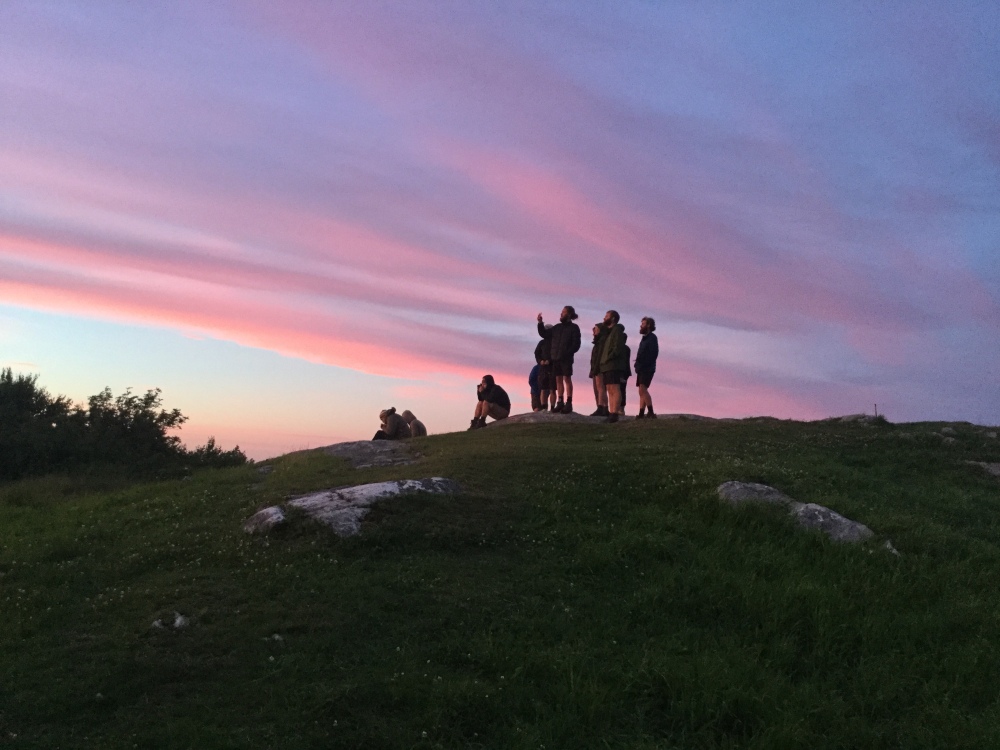 The Best Trail Magic
I got up early to watch the sunrise, then went back to sleep. 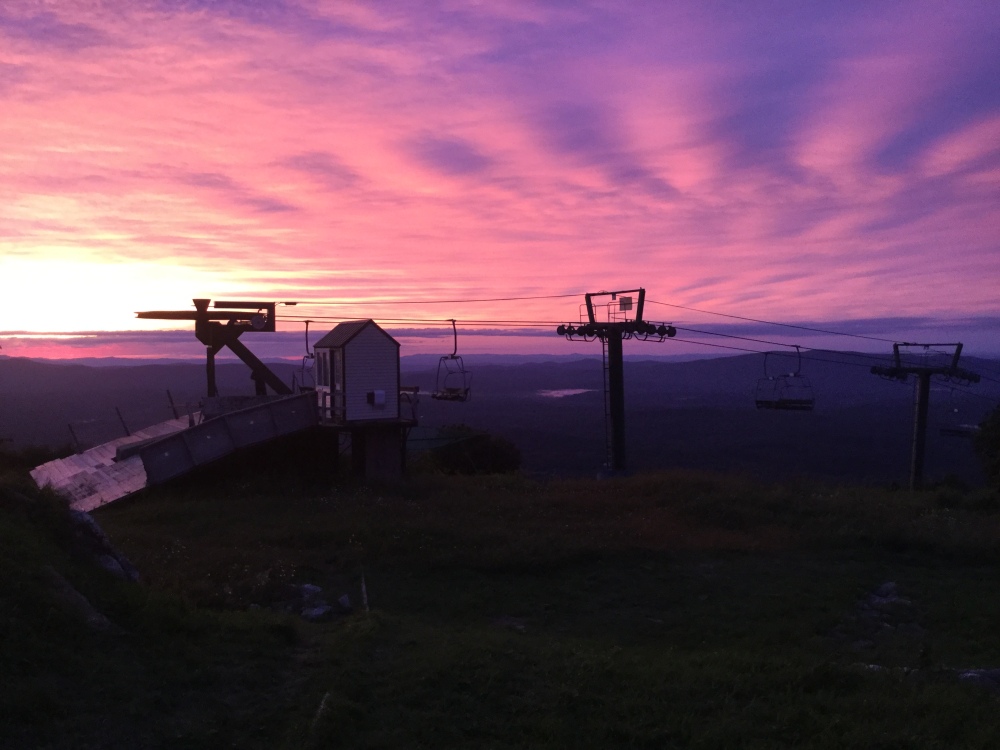 Eventually, we all got motivated to get the day started. Our goal was to find another stealth site passed the Big Branch Shelter and we succeeded. As soon as we got to Danby-Landgrove Road, there was the most amazing trail magic! Little did we know, we would end up sleeping on the side of the gravel road with several other hikers. The trail magic came in the form of beer (lots of it!), delicious food, and cuddles with Rosie the dog. 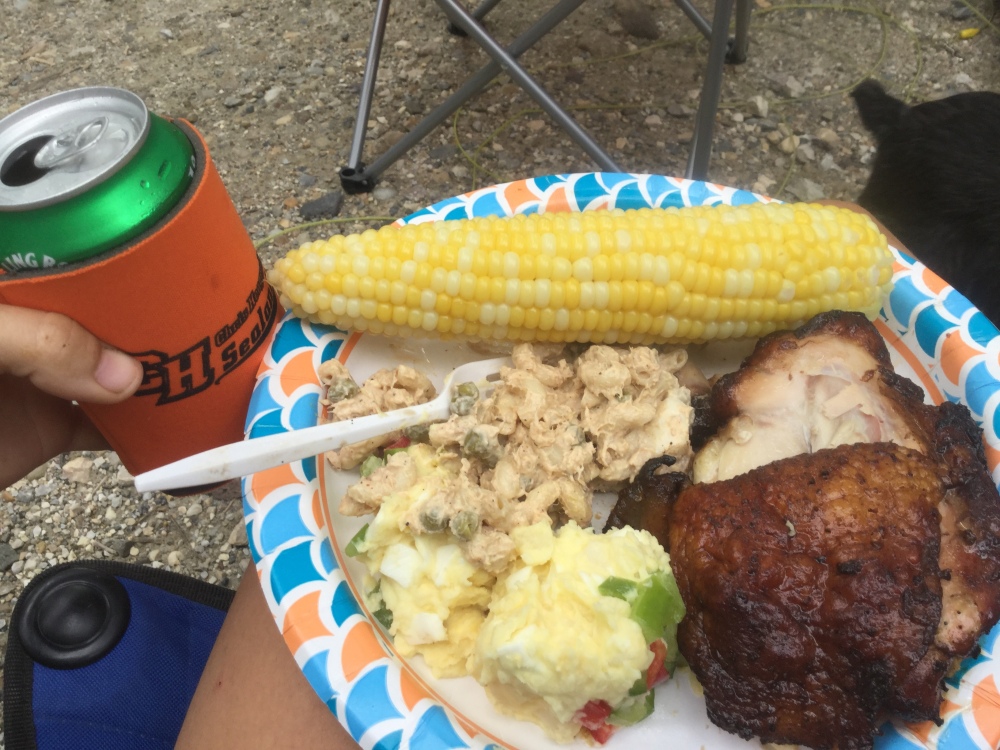 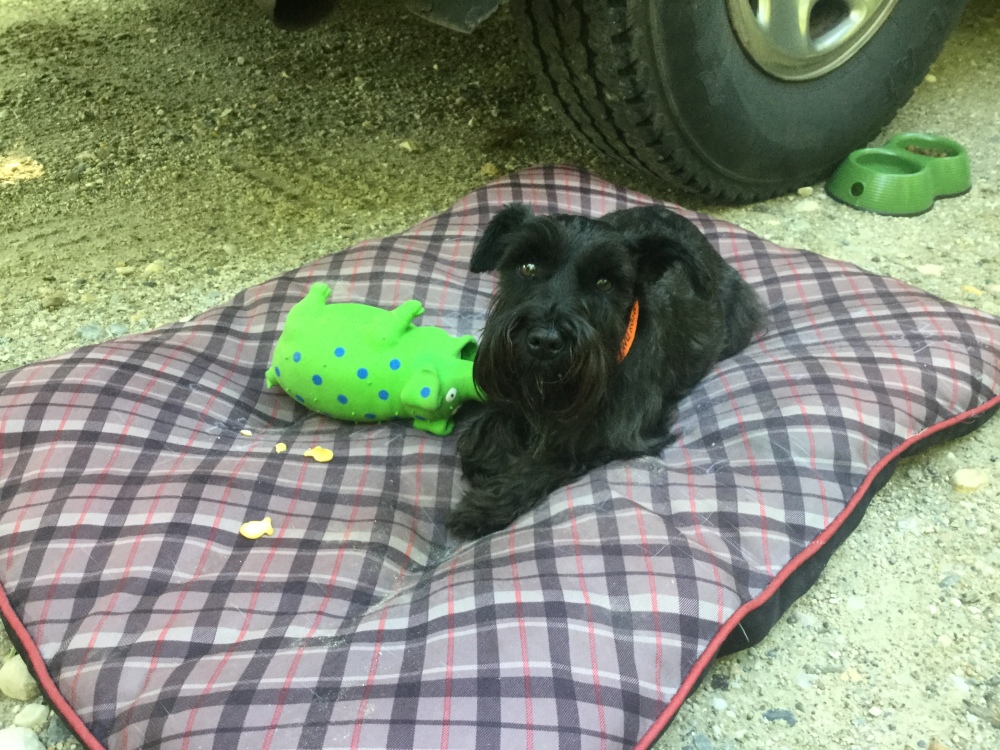 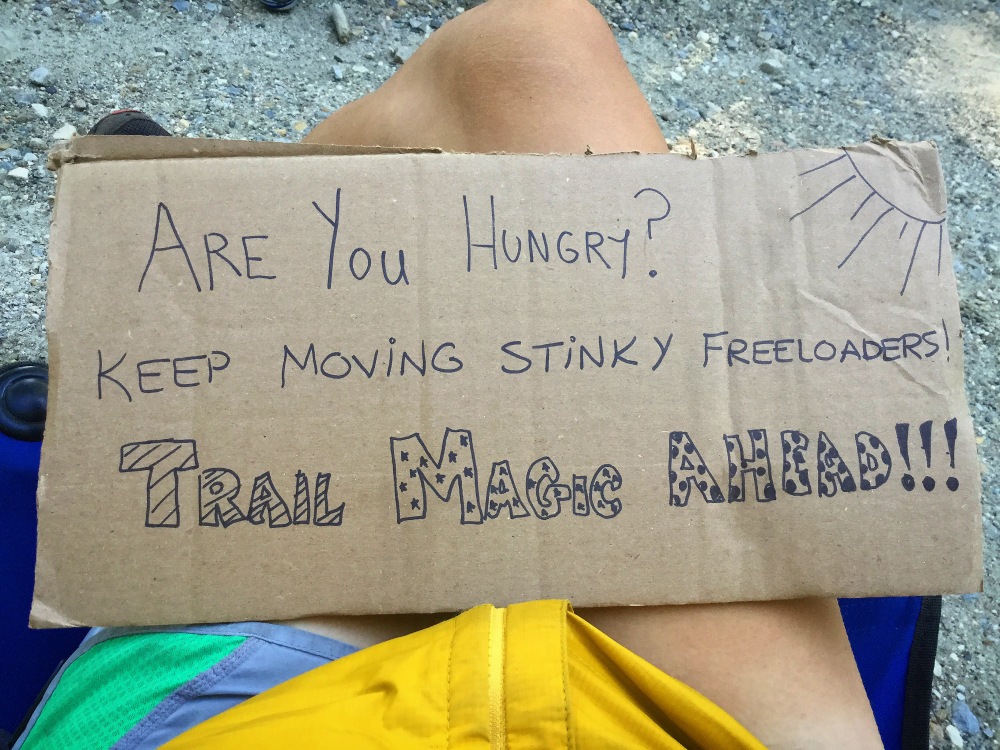 It was given by Chris (Rosie’s owner), and Steve who we had met previously at Catamount Motel in Bennington. 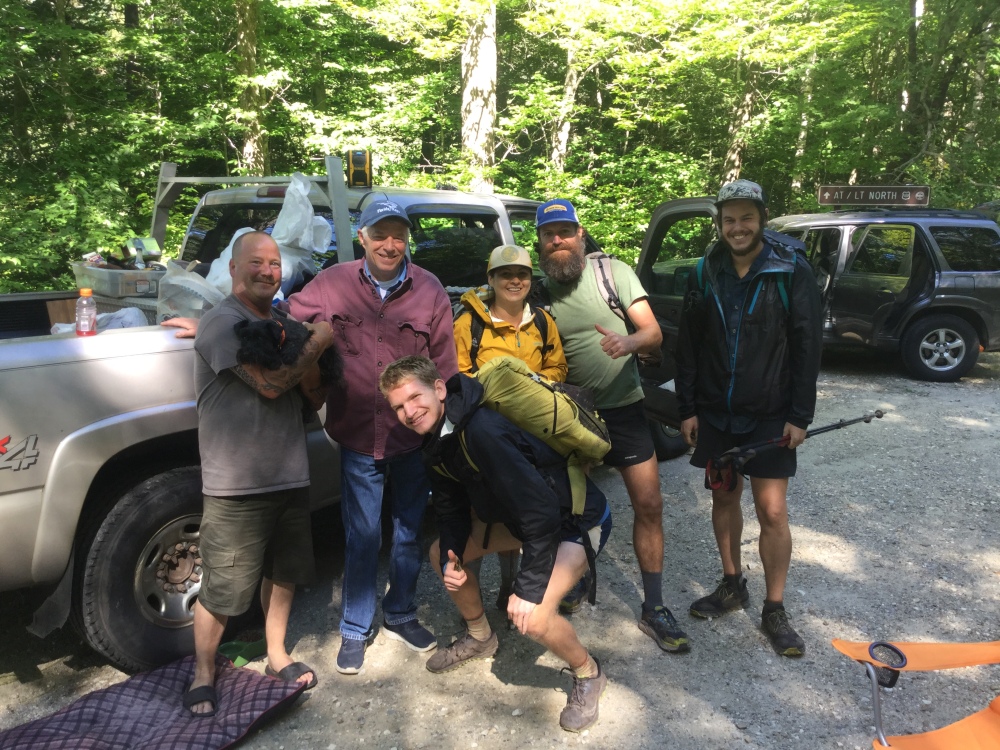 It was an awesome time and no one escaped!

Stumbling Along
We were all feeling a bit fuzzy, but had a warm breakfast cooked by Chris before hiking out. We hiked passed Little Rock Pond before taking a lunch break at White Rocks Cliff. 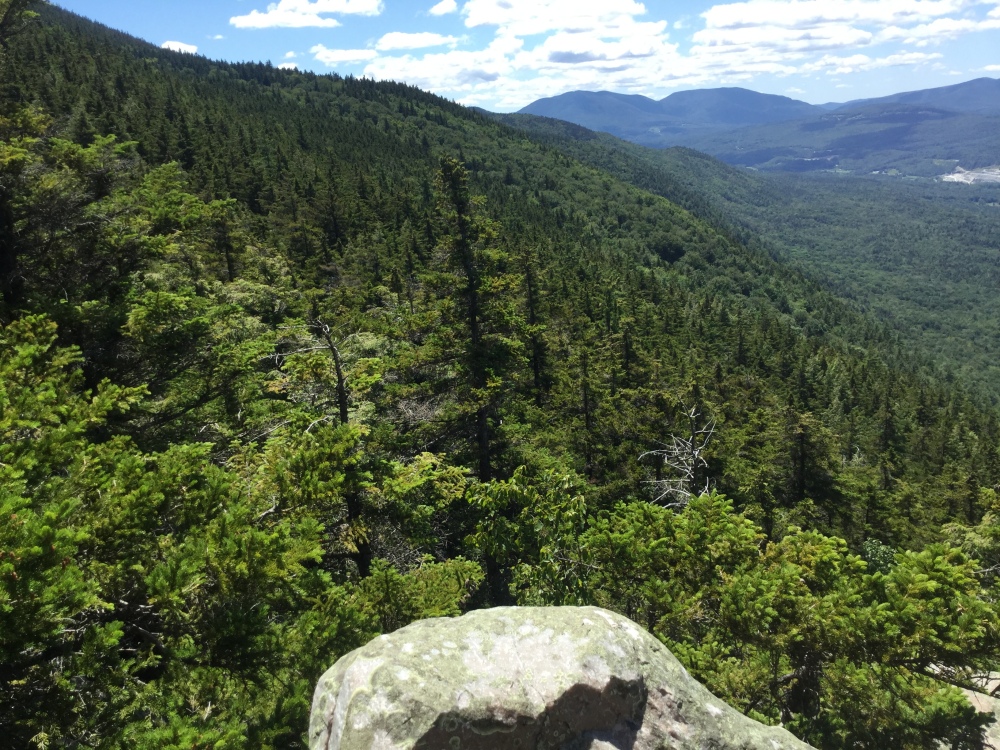 We would wind up at Clarendon Shelter that night.

Killington Peak and Rutland, VT
After passing the “500 Miles to Katahdin” sign, the day would get grueling. 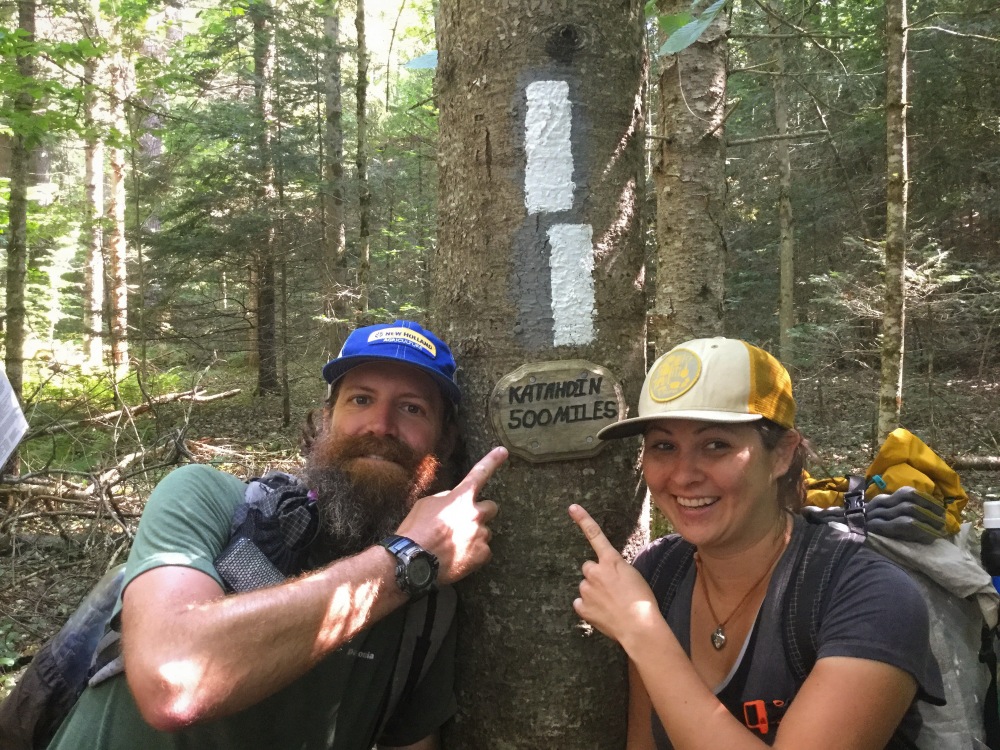 It was a tough climb up to Cooper Lodge Shelter where we all met for lunch, and a scramble to the top of Killington for the summit view. It was totally worth it though. 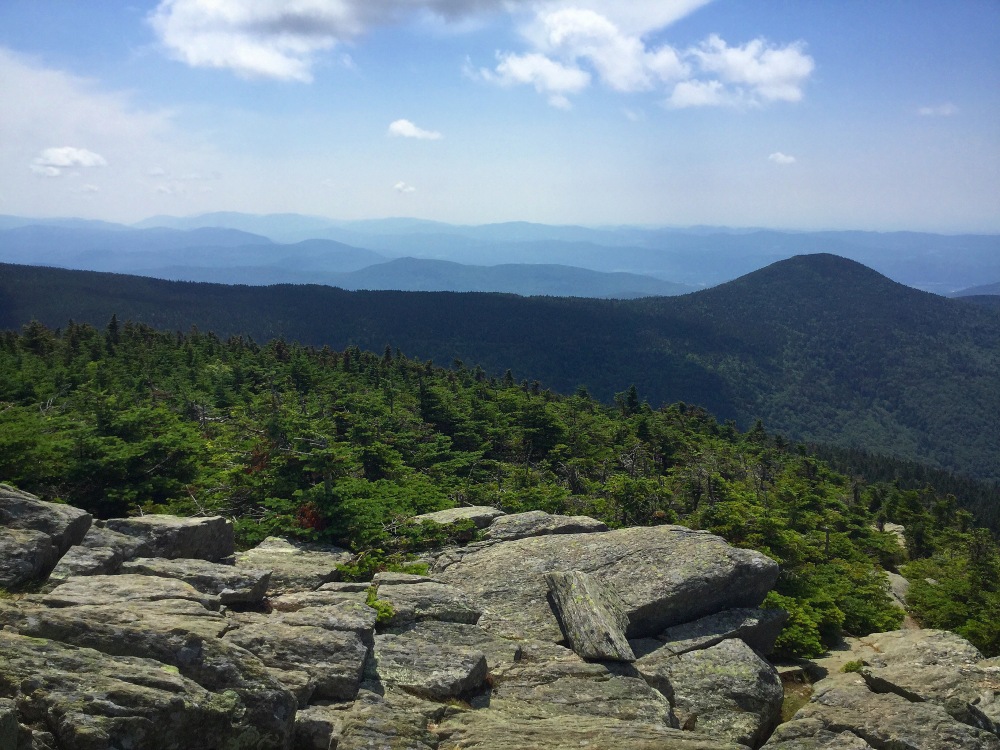 We continued on down the mountain. The trail was out to kill me along the way. I was knocked to the ground after slipping on a wet root, then I nearly impaled my leg with one of my trekking poles after it slipping out of my hand. We got to US 4 and hitched into Rutland, VT.
We got dropped off at the Yellow Deli Hiker Hostel and inhaled some of their amazing food. That place is great! 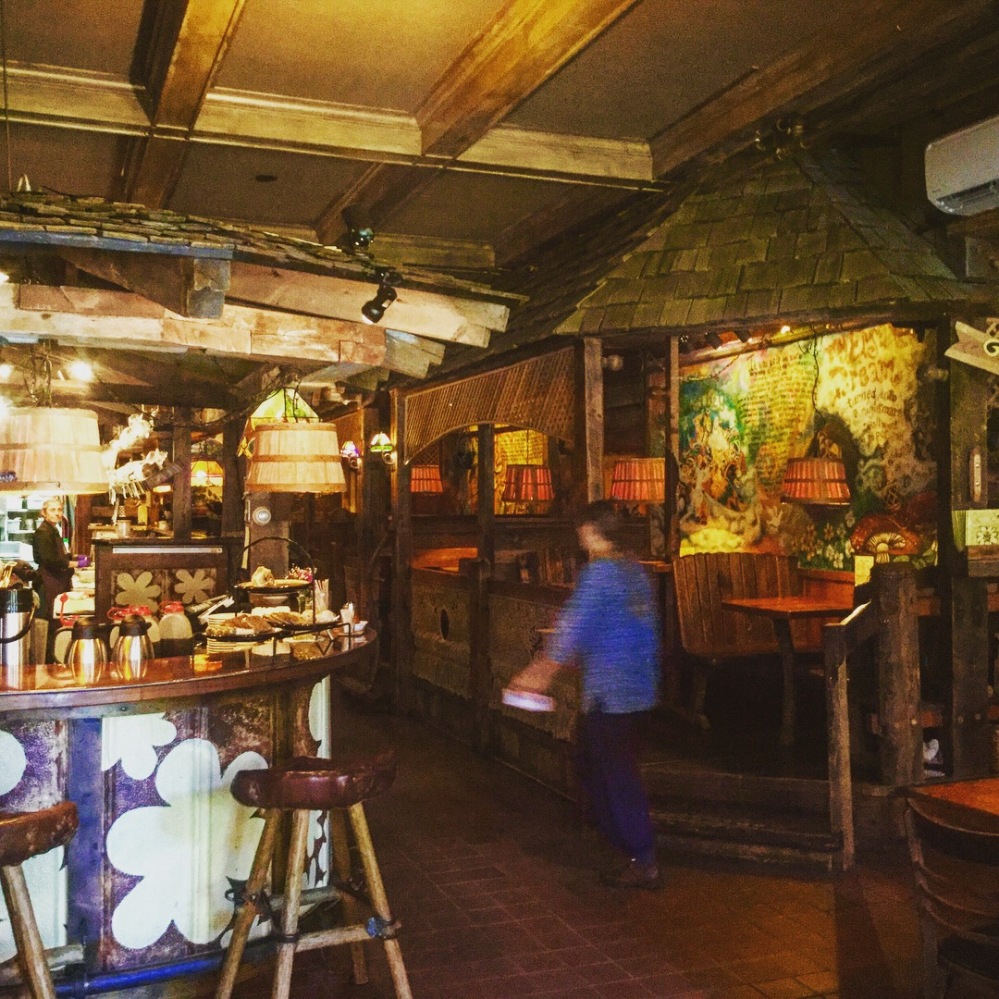 After claiming our bunks in the hostel (which was jam packed full of hikers), we got some drinks at the local watering holes with Gumby, Cricket, and Lil Wayne. Other hikers would soon follow suit. 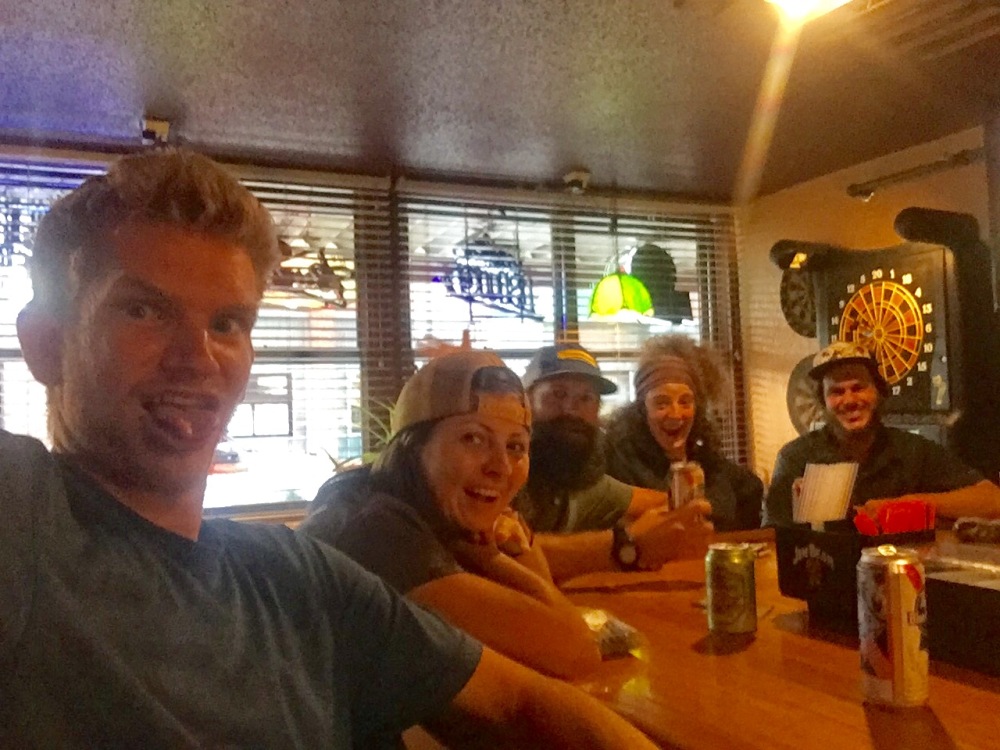 There’s No Escaping The Yellow Deli
I swear we had totally planned to hike out, but we got sucked in the Yellow Deli vortex. Plus, we all were a little hungover. We got laundry rolling, then joined everyone downstairs for the free breakfast. It was a record breaking 63 hikers in the hostel which is the most they’ve ever had during this time of the season. We resupplied and started drinking at our new favorite place, Two Shea’s, (Not “Two Shoes”). For some reason that’s what we all convinced ourselves it was called the night before. We also checked out the Hop’n Moose Brewing Company before returning to the Yellow Deli to eat dinner. The rest of the evening was spent at Two Shea’s with hiker trash. We were even surprised to see Heavy C join us, who we haven’t seen in a long time.
A Thief, Bobo Burgers, and The Lookout
The record number of hikers was broken again (64 in total), as announced during breakfast. However it may have only been 63 after all since a guy wearing jeans (clearly not hiker attire), disappeared with Cricket’s phone. They sent him messages which must have spooked him since they tracked it down a few blocks away in a bush.
We lounged a while, cleaned our bunks, and packed up to go. We said goodbye to some since most people came through the first entrance to Rutland and were slack packing. We got the climb to Killington out of the way so we were ahead of most people at the hostel.
After hitching back to the trail, we only hiked 4 miles until we stopped for trail magic thrown by Bobo (who we’ve been hiking with), and his mom at Gifford Woods State Park.

We had a burger and a couple beers which helped snap Frisbee and I out of our hangover. It did the opposite for others. Our Tramily was dropping like flies after passing Thundering Falls and beginning the climb up Quimby Mountain. 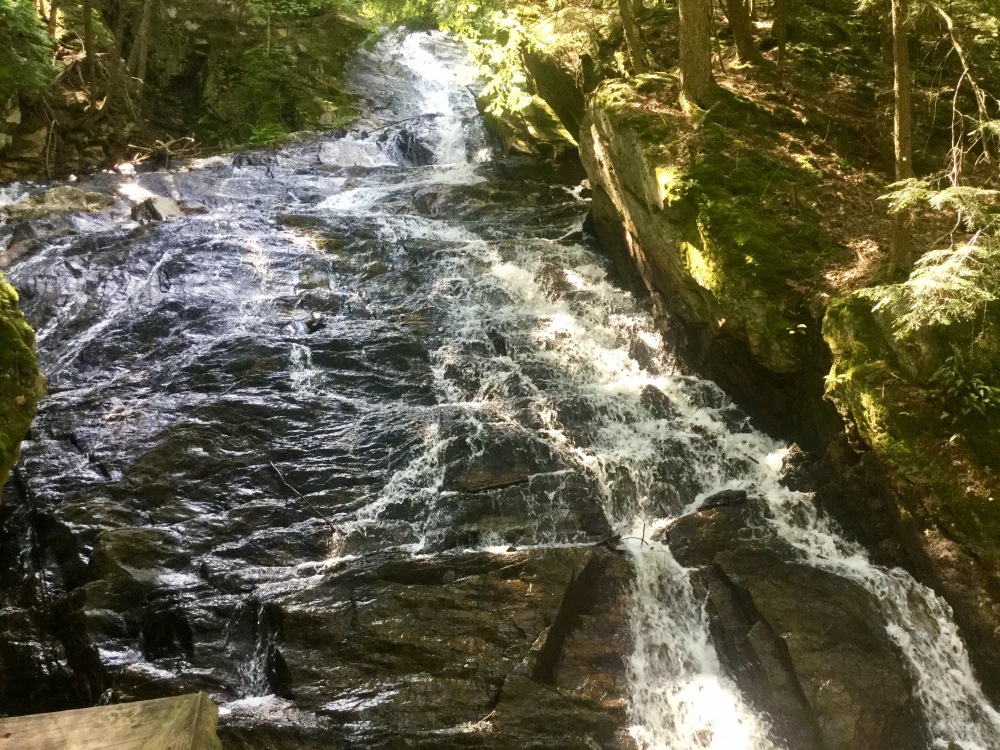 Frisbee, Gumby, and I made it to The Lookout cabin before dark, which had a platform of the roof to catch a good view of the mountains. I ate quickly so I could watch the sun set. 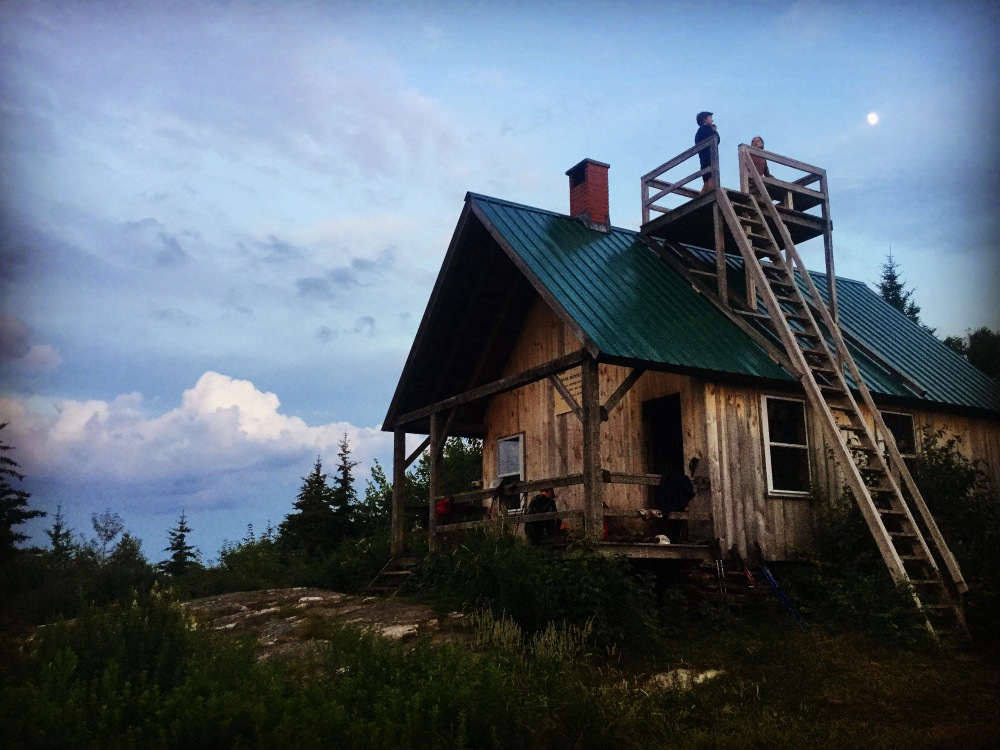