There was an exit for the Caverns of Sonora while leaving from Junction, TX. On the way there, we saw two dead bulls laying on the side of the road which I thought was disturbing. We didn’t check out the caverns since it didn’t seem worth the price, but I was briefly entertained by all the peacocks running around the parking lot.

We headed for Marfa, TX and took in the desert scenery. In the distance, there were rocky cliffs covered with brush, and the occasional wind turbine and “nodding donkey” (pump jack). Some were active while others were motionless. In between were scattered cacti, yellow flowers, short, bushy trees and desert palms. We drove passed a large wind farm, but for the most part, it was beautiful mountains and vast nothingness.

We took 67 South to Marfa after filling the tank, and I couldn’t get over how lovely the scenery was. Occasionally, you’d see a dust tornado spinning around against the landscape. We thought we spotted a dead wolf or coyote on the side of the road and we pulled over (Nope, just a dead deer. Carry on)!

We explored Marfa on our bicycles, by van, and by foot. We went to Frama @ Tumbleweed Laundry which was a laundromat and ice cream shop combo (who would’ve thunk it?)! Trevor got coffee, I got a Mango smoothie, and then we went to The Get Go, a tiny independent grocer with organic and local products. Nearby was a Gallery which we didn’t check out unfortunately. Someone had spray painted “LAME” overtop of “Gallery”. I hope it was. It would make me feel better about my decision. Right outside of town, there was a building that appeared to be a “Prada” shop, however it was just a display for the sake of art. Marfa is a weird, artsy, up and coming town. I couldn’t imagine living there though. It’s hundreds of miles from much of anything.

One of the things Marfa is known for are the “Marfa lights.” There’s a viewing area about 8 miles east of Marfa along Highway 90. If you look south nearby US-67 heading towards Mexico, you may see “ghost lights” out in the desert. Some say it’s ghosts, military testing, UFOs, or some sort of paranormal phenomenon. 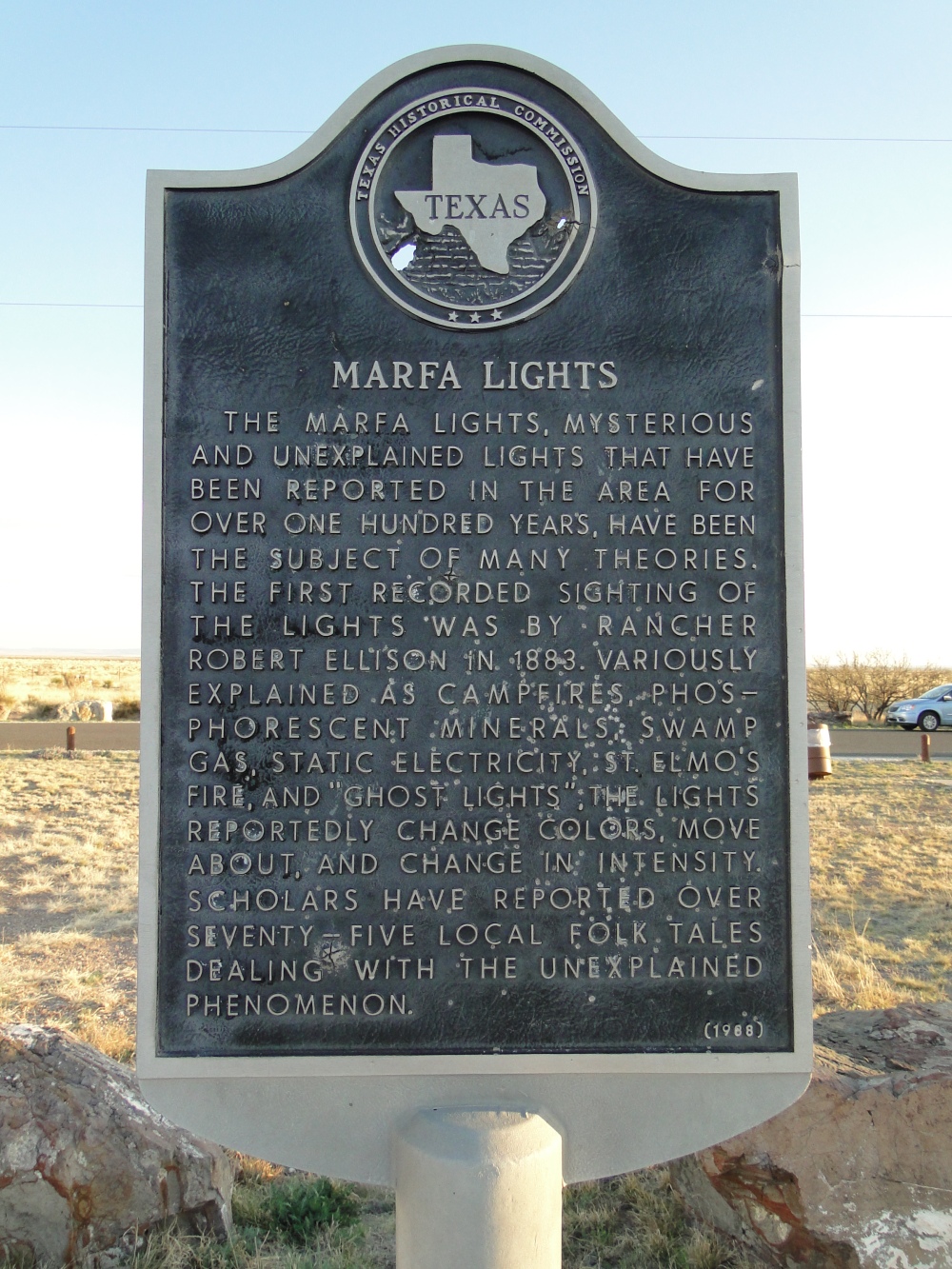 Some evidence points towards atmospheric reflections of campfires or headlight from vehicles passing in the distance. Regardless, we waited, and waited, and saw nothing but the Chihuahuan Desert. We did however, catch an amazing sunset, and were able to see nearly all the stars in the sky once the sun went down.

The tales of Marfa lights must have triggered me to keep my eyes peeled, because I noticed a UFO in the sky the next morning. Just kidding, it was just a weather balloon. We decided to pay Marfa Public Radio a visit. They not only hooked us up with a free sticker (we like stickers more than your average 6 year old girl), they gave us a free tour. It’s a tiny radio station, so it was a short one, but it was still nice of them to show us around. We tuned into 93.5 FM Marfa Public Radio and listened until we lost signal as we traveled along Highway 90 towards New Mexico.

The landscape was constantly changing between mountain ranges in the distance to grasses and shrubbery. After passing through the tiny town of Valentine, I saw a bloody bull head laying on the side of the road. This is Texas, and I’m slowly learning that sort of thing is totally normal here. We passed right on through El Paso, the “Corporate Diarrhea of America” as I like to call it, where you will find 3 or more of every chain restaurant and shop that ever existed in the US.

Finally, we arrive in New Mexico and we couldn’t be more excited! This was the first time during the whole trip that we entered an unexplored state.

Our initial entry in the state was welcomed by the smell of manure and mini-dust tornadoes in the distance. We passed through the White Sands Missile Range before briefly being stopped at an Inspection Station to check if we were smuggling any illegal immigrants. They never found them.

Before the trip, we had purchased an annual U.S. National Park Pass which covered national monuments in addition to parks. We got our first use out of it when we stopped at the White Sands National Monument.

Some Fun Facts about White Sands National Monument in the media (as of 2013): 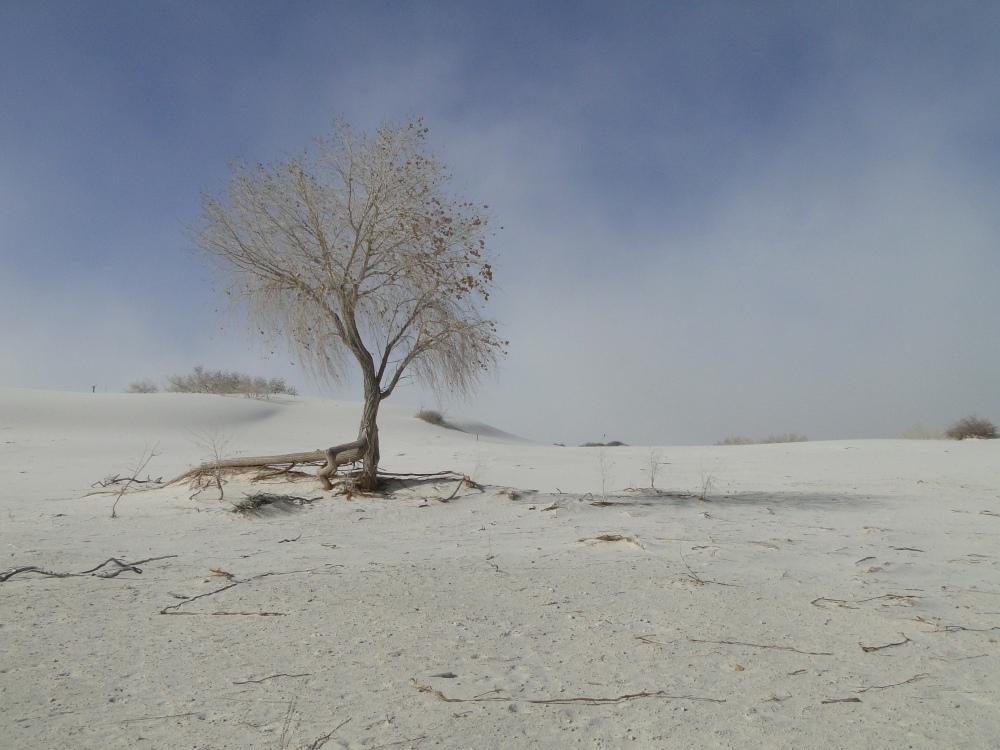 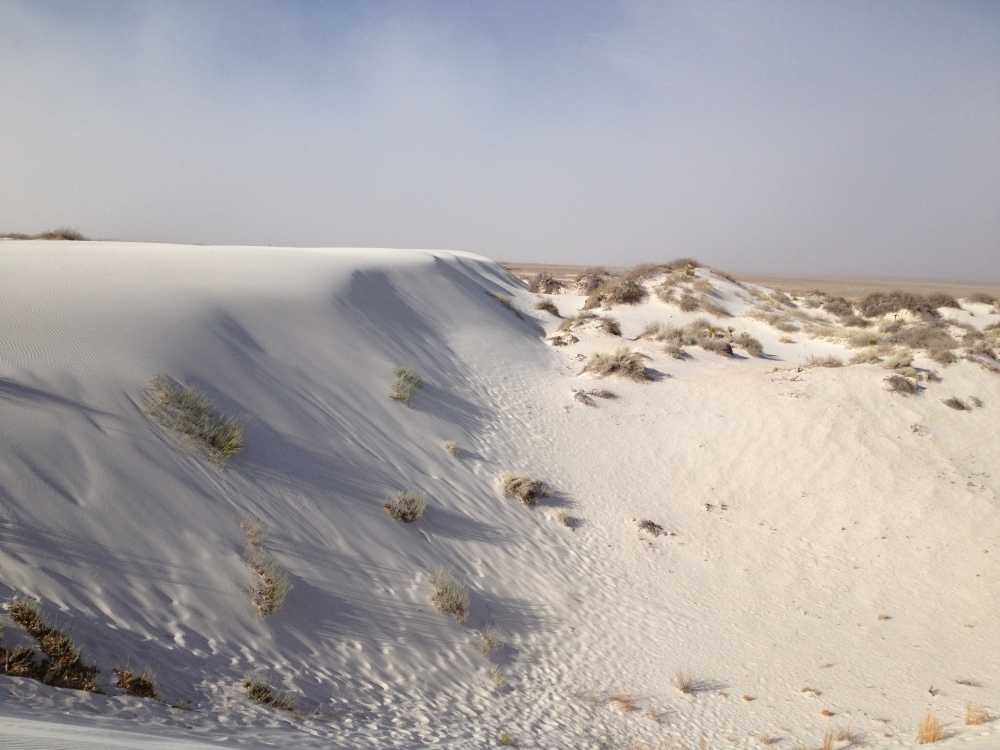 The scenery was gorgeous and we decided to take a short hike. Unfortunately, we didn’t have enough time to take a longer one. Some people purchased sleds to ride down the dunes with, and I was envious. We enjoyed our hike anyway, but my enjoyment was short lived as I tore my shorts in half when they got caught on the door jam on the van. I wanted to cry because I really liked those (Pata-Gucci) shorts, but they were destroyed, so we stopped by a shopping mall to find replacements. I kept the scraps of fabric that remained (this seems like irrelevant babble now, but I assure you, it will boomerang around when we get to Denver). We parked the van in a Walmart parking lot and a nice lady who worked there gave me some suggestions on places nearby worth checking out in the morning.

Jump Back to Part 10: A Beaver with a Baseball Hat, The Alamo & El Poopador

Jump Ahead to Part 12: Petroglyphs, Missiles & A Blacksmith