We left Alamogordo, NM and took US-54 North to check out Three Rivers Petroglyph Site, one of the places recommended to us by a local we met at Walmart the previous day. The petroglyphs were created by the Mogollon people around 900-1400 AD and more than 21,000 markings can be found there.

We stopped in Carrizozo for gas before taking US-380 West towards Albuquerque. Another place recommended to us was the Valley of Fire National Recreation Area, which we stopped at on the way. The area was created by lava vents extruding lava on the earth’s surface some 2,000-5,000 years ago. Even with the hardened lava, you can still see plenty of plant life, like banana yucca, walking-stick cholla, juniper trees and prickly pear cacti. 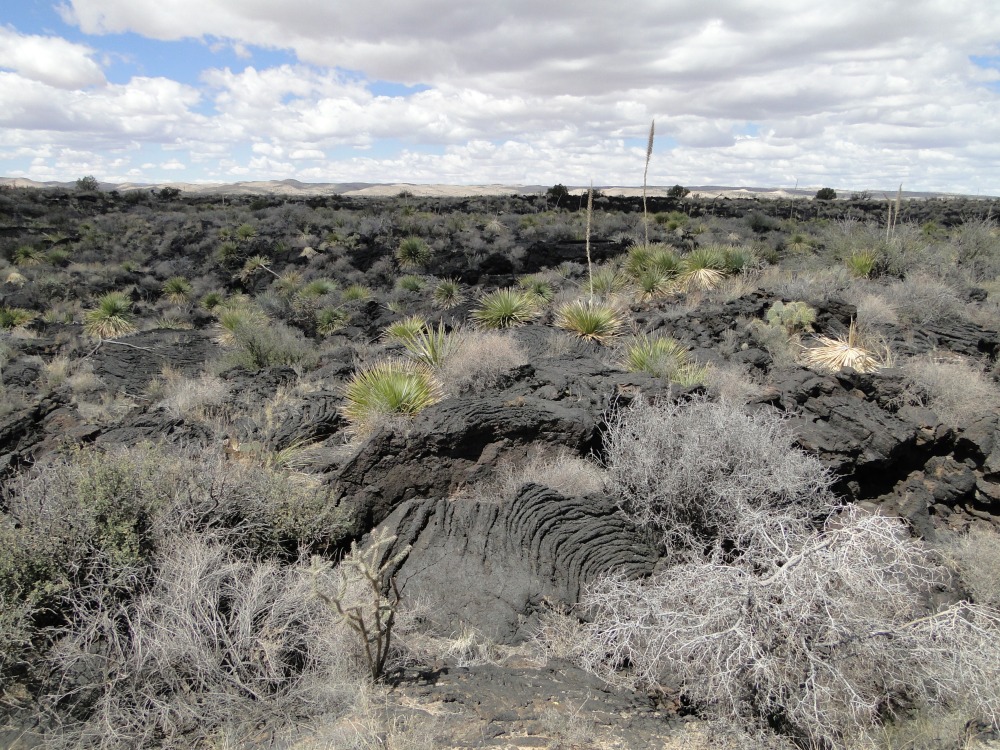 In the distance, you could see the Trinity Site where the first atomic bomb was designed and tested (known as ‘The Manhattan Project’). The military still operates at White Sands Missile Range and missiles were heard (and felt) being fired off nearby. You could feel the shock wave in your chest. It was quite nerve-racking to experience for the first time, and the second time, and the third time. Let’s just say every time it happened, it scared the dookie out of me. Even after leaving, several went off and you could still feel the shock waves as we were driving.

The scenery changed colors frequently as we drove along, starting with beige desert sands with scattered shrubs, to red clay with grasses, to pink and purple tinted soil. We took I-25 North to Socorro, then US-60 West in search of Water Canyon campground in the Cibola National Forest. After getting turned around in Magdalena, a town we would visit later, we found the correct path. The fence was broken by the road, so cows were running wild, and two dogs attacked our tires before we took the steep hill to camp.

It was nice to finally relax as we listened to the wind blowing loudly between the mountains.

We were woken up to the howl of coyotes, then rode into Magdalena where we met a blacksmith by the name of Z.W. who we chatted with about living off the grid. He assisted us in making a hook out of scrap metal which we proudly displayed later in the van.

Check out that fancy twist! I did that!

We walked around Main Street, attempted to check out Kelly Ghost Town (the roads were too haggard to get the van to it), and eventually returned to our camp site.