I did a thing today. Probably won’t do it again. But I also said I wouldn’t run 13.1 miles ever again, sooo… 🤷🏻‍♀️Thanks @trevtrevorwhatever for the support, and super rad to catch up with you @wildturkeytrotsthru Thanks for the hospitality!
9/9/21 - Mission Accomplished! 🤘
Montana! You pretty!
Yet again, Montana brought the hiker friendliness in Augusta, and a sweet sunset too! Once we were able to force ourselves to leave, we were off to “The Bob” and finally got to see the Chinese Wall. We’re officially in the heart of grizzly country, y’all! 🐻
The sweet views continued all the way to Augusta!
Had an awesome birthday which I celebrated with my stinky, freeloading #hikertrash tramily, the wonderful people of Lincoln, and Daryl the Sasquatch. The hike from Rogers Pass was just as amazing as the hike into it after we hunkered down in a yurt to avoid the rain. More climbs, but a lot of ridge walking by rock ledges and towers.
No more smoke, but the days have been windy and the nights have been cold. We visited an amazing outfitter in the middle of the trail, got to see Golden, a familiar face from the AT (2016), and lots and lots of cows! I had been in a bit of a funk lately, but the ridge walk right before reaching Rogers Pass snapped me out of it!
Got stuck in the Butte vortex. We hitched in, hitched out, hiked to the north side then hitched back in. Pizza Ranch was our second home. Eventually we made our way to Helena, our second vortex. Before our arrival, we got pounded by hail and rain. The wind was blasting through the trees so hard, they were snapping like twigs behind us. The people of Helena were beyond hiker friendly. We got stuck a second day when a girl working at the brewery let us crash at her place for free, hot tub included! Life’s good!
The road walk continues. Nevada City to Twin Bridges to Silver Star to Butte! Time for a couple zero days!
Posted on October 12, 2017March 31, 2018 by Stubbs

Originally posted on The Trek on October 4th, 2017

The 100 Mile Wilderness
We enjoyed an extremely delicious breakfast at Shaw’s Hiker Hostel in Monson, ME. Some of us were on a schedule to summit, but I think I speak for all of us when I say we wished we could have taken a zero there. Shaw’s was great!
They dropped us off at the trail and we all mentally prepared ourselves to hike through the 100 Mile Wilderness.

To those unfamiliar with it, it’s a stretch of trail spanning (you guessed it!) 100 miles, where you are unable to easily hitch into town to resupply. You can either carry all your food with you, or do what we did, and set up a food drop through a hostel. Now it’s not impossible to get out of the “wilderness”. It’s just trickier since they’re logging roads that don’t get much traffic, or they’re private roads and usually require a fee for people to drive on them.
I was nervous. I was 99.9% certain that my leg pain was coming from a stress fracture. I’ve had 2 in the past 2 years so I was familiar. I knew I was tough enough and stubborn enough to push through it, however there’s the obvious risk that the fracture could evolve into a break. Giving my location, getting to a hospital if I needed to wouldn’t be easy. Was it stupid to continue? Perhaps, but this was my second year attempting the AT and I was determined.
The scenery leading us in was amazing!

We all admired Little Wilson Falls, and then we had to ford Big Wilson Stream. 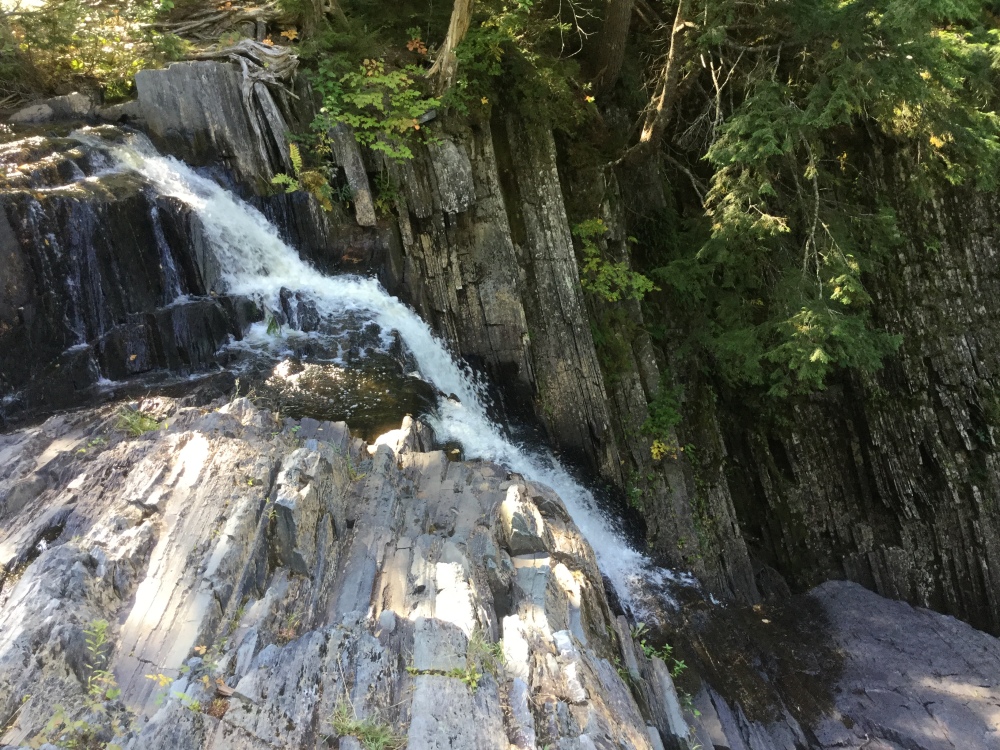 Thankfully, Middle Brother let me use his trekking poles since this specific ford was tricky, even for those with better mobility!

Night Hiking Nightmare
The guys hiked on. I would begin to really struggle in the evening, and knew I’d be night hiking into camp at Long Pond Stream Lean-to.
Once it got dark, I was in hell. I would trip and fall repeatedly causing me more pain and to slow down my pace even more. I was falling off bog bridges with the poor depth perception from my head lamp. It was taking me forever. So much so that I started to fear that I passed the sign for the shelter while staring at my feet the whole time.
I had no phone. Not that there would be reception if I did. I had no tent. Frisbee always carried it. I was hurting so bad that turning around wasn’t an option. The AWOL guide wasn’t helpful since there were limited landmarks, and I was uncertain which stream was which. If I passed the shelter, my crew wouldn’t know it and might search for me southbound. I was in a bad place.
I was grateful to eventually see a head lamp shining my way. It was Frisbee, and he carried my bag the remaining mile to the shelter. I couldn’t be more relieved. I was delirious. It had to be the worst day on trail I’ve ever experienced.

Bad Math
I had planned to get up earlier since my slow pace required me to do so, however I was exhausted from the night before. I eventually got moving after a much needed pep talk from Bird Person.

I had already decided that I’d be skipping views if it involved a side trail, but I got some views first thing in the morning while crossing Barren Ledges. 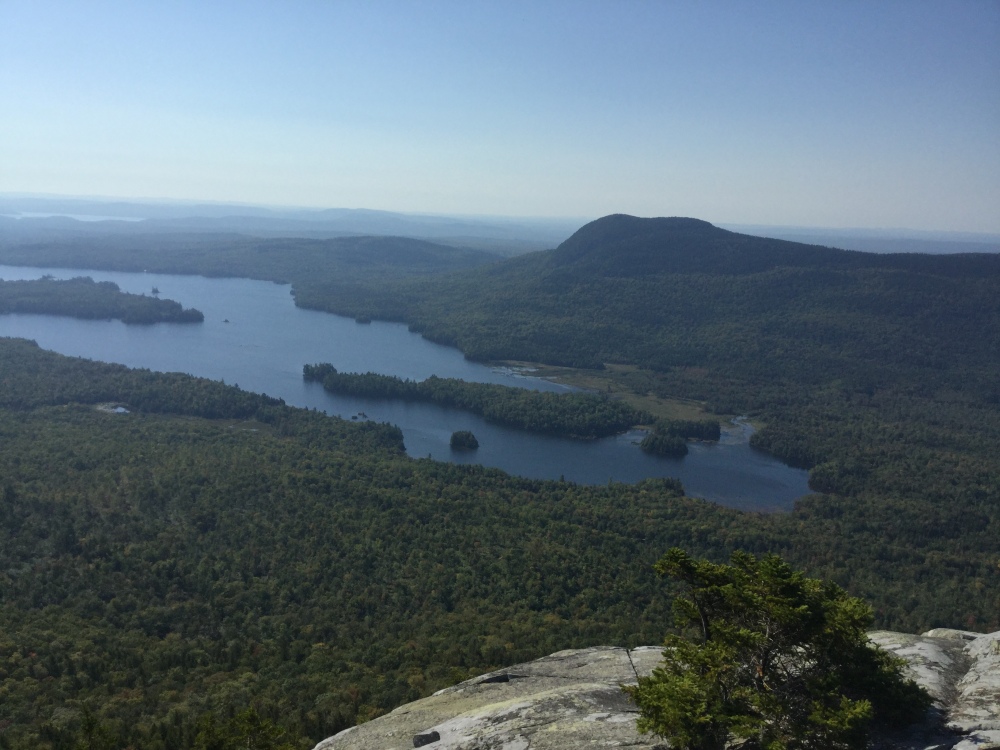 After passing the old fire tower on top of Barren Mountain and the Cloud Pond Lean-to side trail, I took a lunch break. I had five more mountains to climb and needed to fuel up.
Frisbee passed me and informed me that they had done the math wrong in regards to the food drop. Middle Brother and Gumby volunteered to hike ahead of us so they’d be right by the road when the bucket arrived. I was grateful and felt fortunate to have such a supportive trail family.
I got some overlook views before climbing down the mountain of boulders. 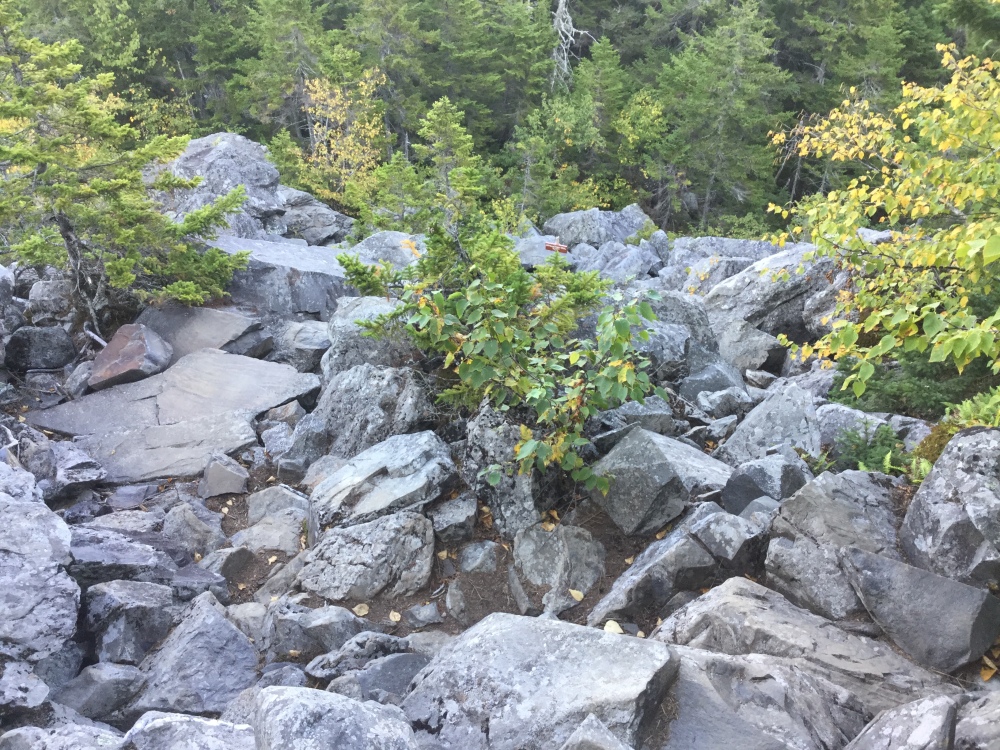 A man named Energizer Bunny was providing trail magic just a half mile from the campsite that Frisbee, Cricket, PCP, Bird Person and I were stopping at for the night. He was waiting on his daughter who he was slack packing along the trail for. After drinking some lemonade and eating the fresh fruit and snacks provided, we set up our tents down the trail.

Moose Poop and White Cap Mountain
I got up early and forded the West Branch Pleasant River just north of camp. I only stopped briefly at Carl A. Newhall Lean-to so I could filter water and grab a snack, then continued to climb Gulf Hagas Mountain. Once I got to the top, I was amazed by the copious amounts of moose poop piles. You see moose poop a lot, but this was astonishing!

I climbed West Peak then fueled up before making my way up and over the rock scramble on Hay Mountain, followed by White Cap Mountain. White Cap rewarded me with some stunning views, including one of the first views of Katahdin. 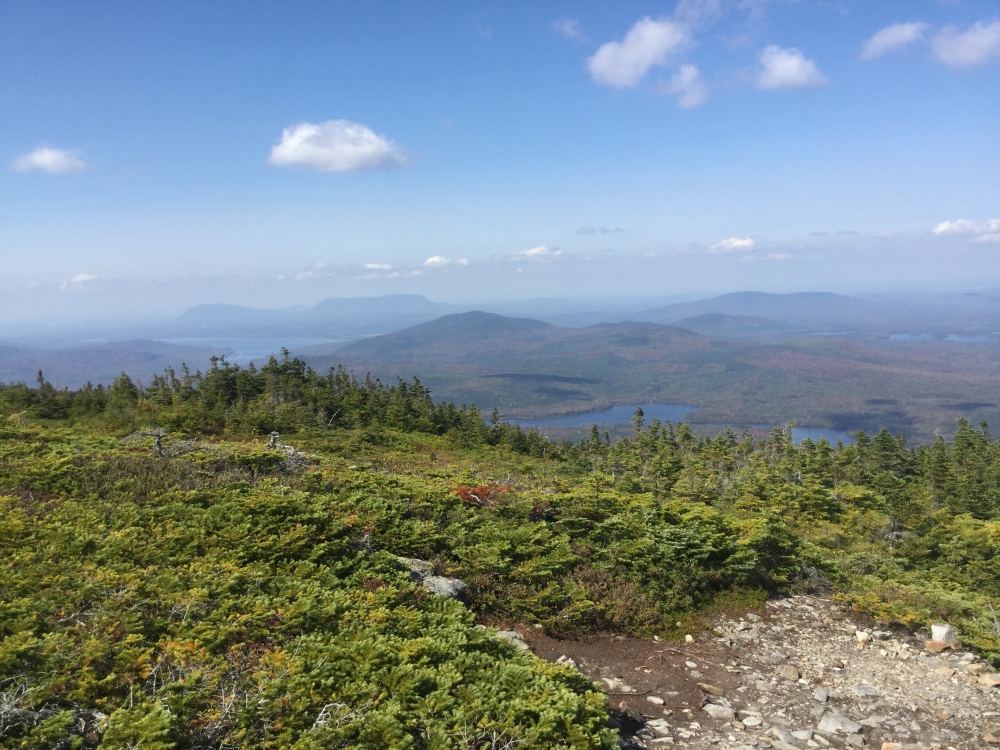 As I made my way down White Cap, a Grouse appeared to be trying to make a nest right on the trail.

I slowly walked around them, not planning to act out of revenge by scaring them like they’ve done to me on numerous occasions. If you’ve never heard a Grouse fly, they make a ridiculously loud flapping noise. When it happens right above your head from behind, you might soil your shorts. I’m glad to say I managed not to do so both times this has happened to me!
I pushed on to East Branch Lean-to where I’d meet up with Frisbee and Cricket. We had an excellent fire, and Cricket startled a section hiker with his wrestling moves as he attempted to break tree limbs.

Resupply Day
Today we’d be reunited with Gumby and Middle Brother, as well as our resupply that they picked up from the road ahead of us. I located their tents close to the beach by Crawford Pond, grabbed my food, chatted with them for a while, then got moving. Most of the climbs were done, and I was happy that the trail was going to be mostly flat the rest of the day. I stopped at Cooper Brook Falls Lean-to where there was a nice waterfall to look at as I ate lunch.

The guys caught up and joined me. Frisbee spotted a jar of peanut butter under the shelter which looked full. Gumby climbed under the shelter to retrieve it and noticed it wasn’t expired. I gave the drumroll as they opened the lid to see if it was still sealed. It was! The guys were thrilled since none of them thought they packed enough food. I honestly think they would have eaten it anyway.

They’d hike ahead, but I’d catch them by Jo-Mary Road where someone left two bags of apples. I ate 3 or 4 them, then packed out a few more for later. I really missed fresh food.
The agreement was we were going to check out Antlers Campsite. If it was nice, we’d stay. Otherwise we were going to take advantage of the flat terrain and push on 3 1/2 more miles to the next shelter. I was fine with either. Once I arrived, they had decided to stay. It was beautiful! 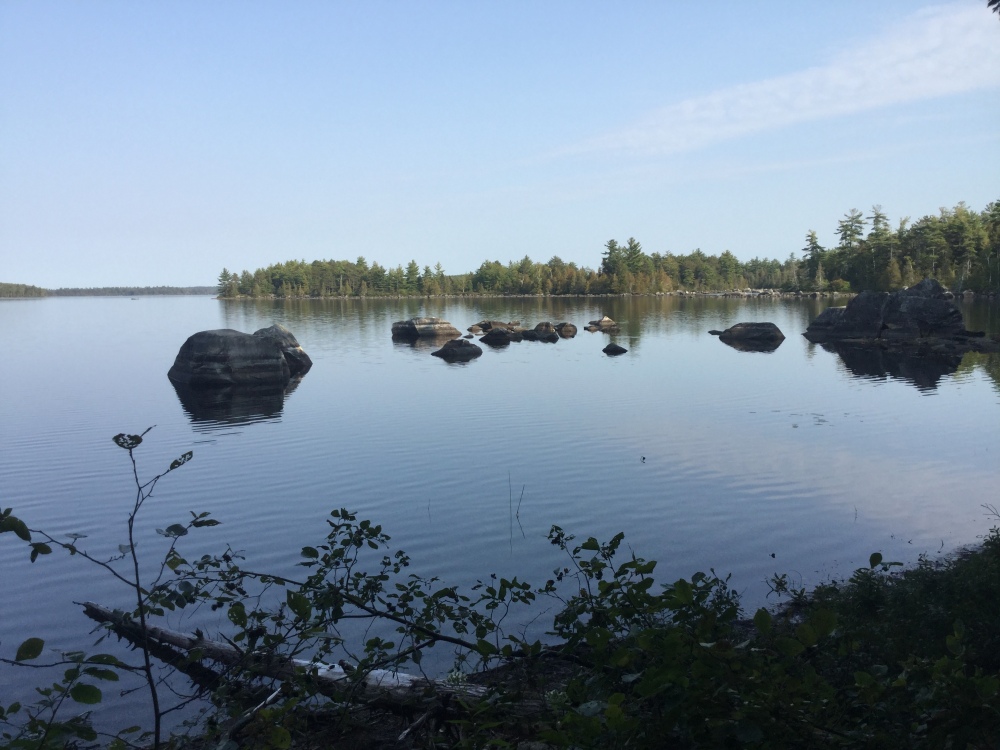 We got set up and started a fire. A few other hikers joined us, but we had the peninsula to ourselves for the most part. I enjoyed hearing the loons at night.