We paid Jerome one last visit before taking I-17 North to Montezuma Castle National Monument. It was a lot smaller than I had imagined it to be and there was little else to enjoy while we were there, so I was grateful we didn’t have to pay to see it since we used our National Park Pass instead (a pass that we would get more than our money’s worth out of).

We took Route 179 North towards Sedona, AZ, and stopped at the Red Rock Ranger Station to ask where we could park for free overnight. The ranger gave us a poorly marked map and we headed into Sedona. We quickly realized we were two dirt baggers surrounded by rich tourists. The views at least partially made up for all the annoying helicopters flying overhead every two minutes, the rowdy pink jeep tours full of gawkers, and the rude shop owners. I know we “look” like hobos, but don’t be so quick to judge, d*ck. You just lost two customers.

We found a primitive road and the more we drove away from civilization, the more I developed the irrational (well, maybe not THAT irrational), fear that the van would decide to just stop working. On the way, we got to see a roadrunner for the first time. They are fast little f*ckers! 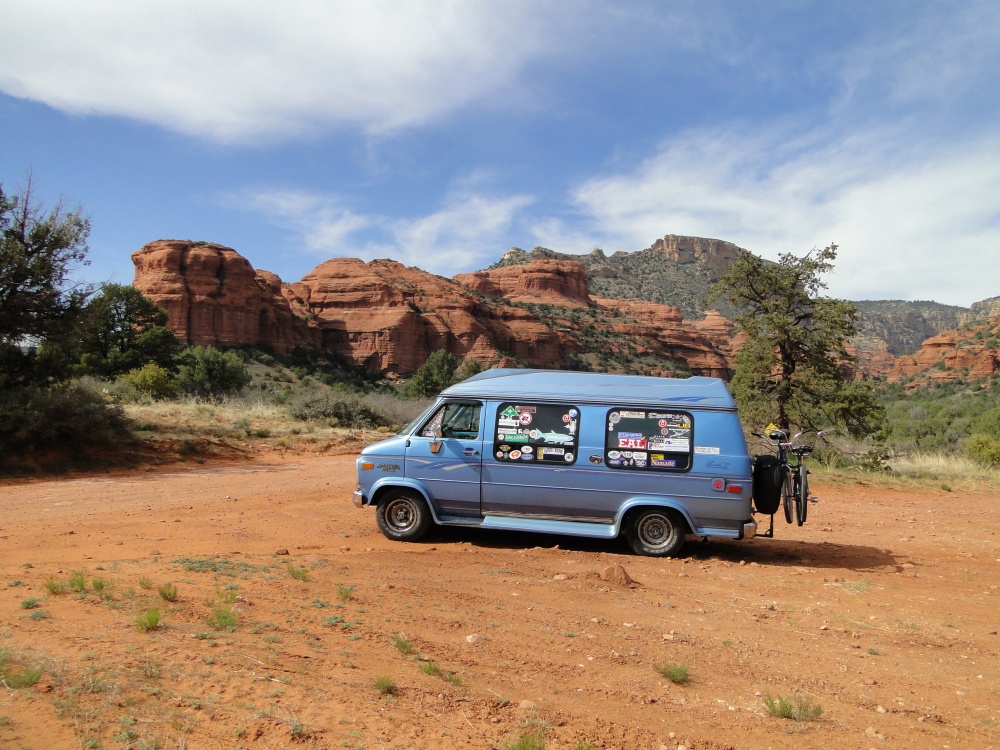 Of course, because it only happens when it’s totally inconvenient, I had to poop and we were far from a toilet. I could have went outside, but there was a ridiculous amount of gawking tourists with cameras in their claws riding passed in pink safari jeeps every few minutes, and I didn’t think my timing would work to my benefit. So I used the luggable loo (aka: the bucket in the van). I’ll spare you an unnecessarily long story about excrement, but you know you’ve found true love when your other half carries your bag of poo for you. Especially when it gets caught on every briar bush during his search for a place to dispose of it. Especially while you’re hysterically laughing at him during the process and expect the bag to tear at any given second. Lucky for him (not for the story), it didn’t, but he still didn’t find this as amusing as I did, and still brings up what a jerk I am for laughing at him to this day. And to this day, I still giggle about it.

Speaking of crap, the map we had was anything but helpful since there were no road signs to direct us. We thought we found the right place to camp, but the other people around seemed less than friendly. One darling girl even flicked us off as they drove by for absolutely no reason (she’s gonna make one heck of a politician someday). We decided we had had enough, and decided to return to Cottonwood for one last night. It felt like the Twilight Zone; there’s no escaping Cottonwood.

We strayed from Cottonwood, this time for good, and took I-17 North to Flagstaff. We checked out all the little shops around the historic downtown area then grabbed coffee at Higher Grounds Coffee House. Then, we took a drive through the canyons in the Coconino National Forest to get to Pine Flat Campground where we paid for two nights and got 2 “loafs” of wood so we could relax by the fire. PS: My back hates hammocks. I feel like a folded chair when I try to sleep in one.

It’s Trevor’s birthday today, so we took a nice morning hike up Cookstove Trail which was right by the campground.

Upon returning to Flagstaff, we almost plowed our van into a wild turkey. Since plans were foiled for a turkey birthday dinner, I grabbed some ground elk at Natural Grocers to make burgers later. We went to one of our new favorites, Biff’s Bagels to get coffee and lunch before grabbing a few more groceries (and a slice of German Chocolate cake) for dinner. Then we drove back to camp for a cook out, which was tricky since it was so windy outside, but I managed not to catch anything (or anyone) on fire. Although smoke was billowing everywhere we went, we had an enjoyable night by the fire.

After grabbing some spring water, we left Oak Creek Canyon for Flagstaff and passed a van with the slogan, “I’m Slow, But I’ll Get There” painted down the side of it. We could relate. We got Biff’s Bagels for lunch, and then again for dinner later, and spent the bulk of the day lollygagging around more of the shops. 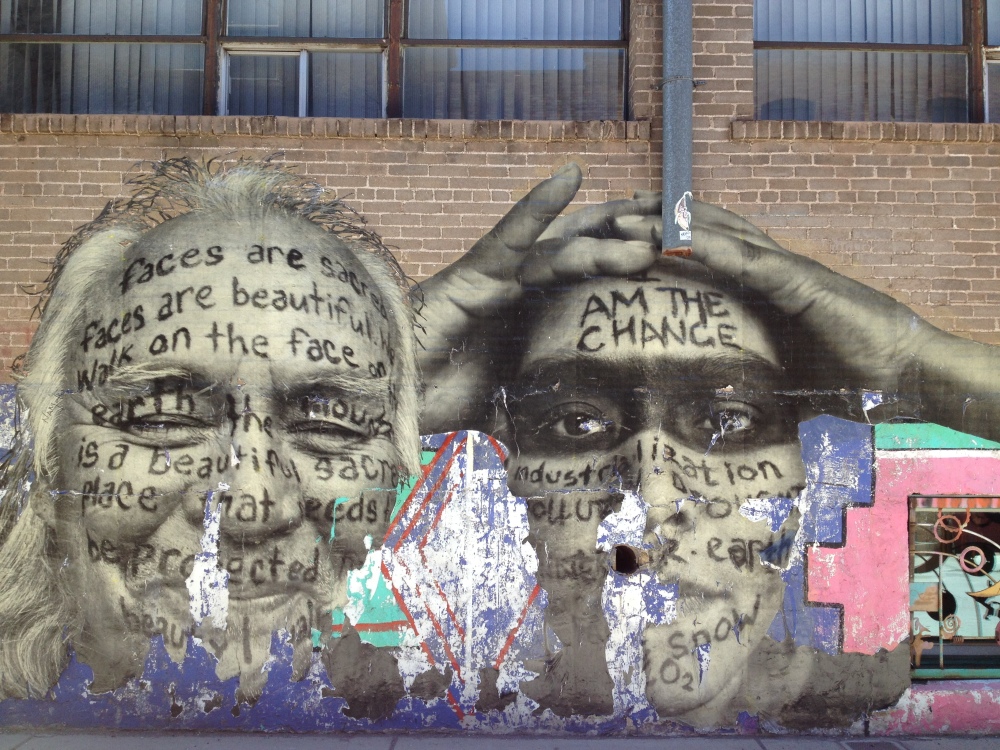 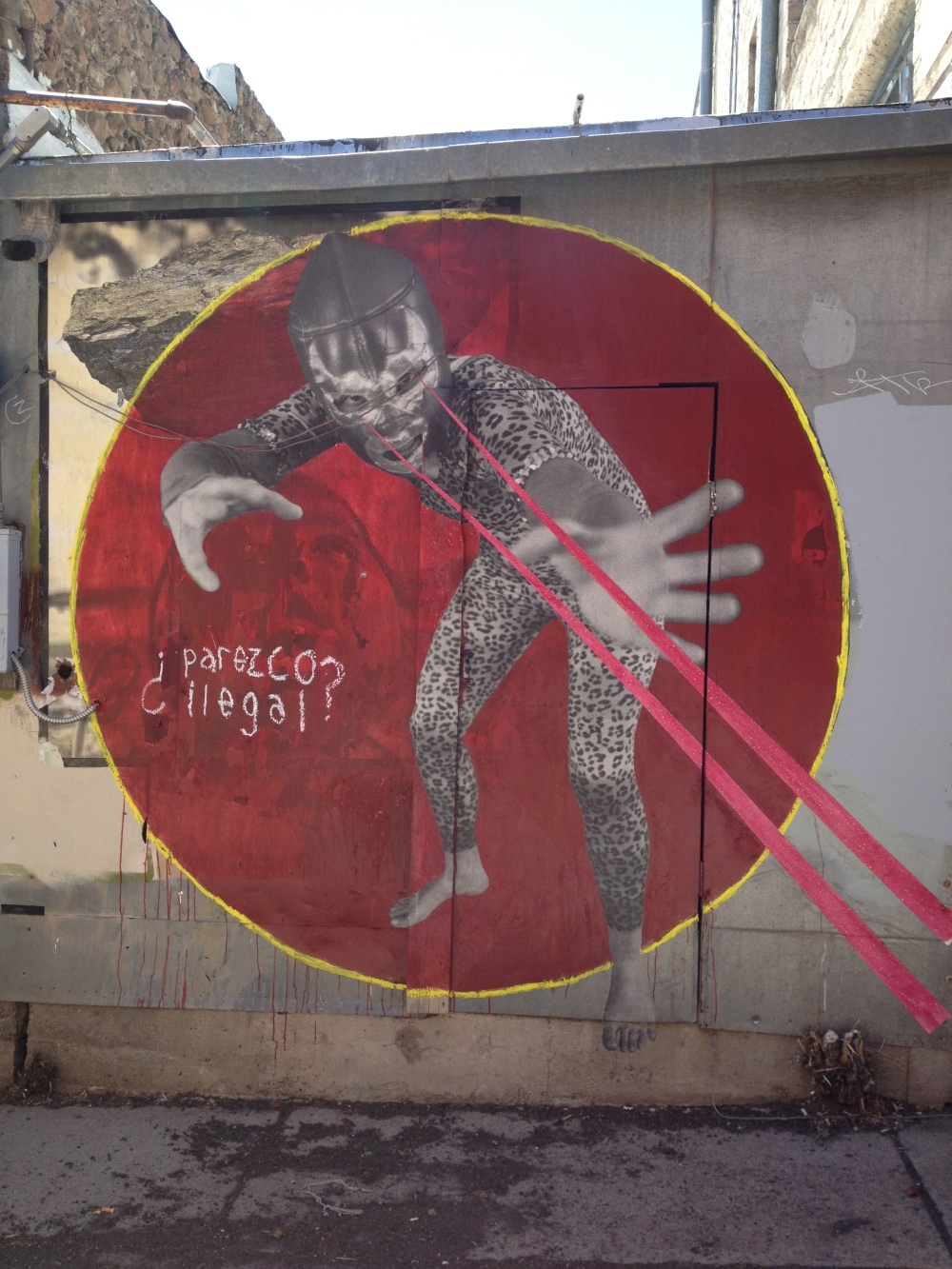 A guy named Cam working at one of the stores wrote down a few suggestions of places worth checking out, including a different place to camp nearby.  After we were done moseying, we took US-180 West to the Crowley winter parking area. The stars were so bright! I would later learn that Flagstaff was the World’s First International “Dark Sky City,” and excluding the random guy doing donuts in the road in the middle of the night, it was a quiet place to sleep.