From Yosemite National Park to Lee Vining, to the famous Ansel Adams Wilderness, and a road walk into Mammoth Lakes. About to get in the thick of it!
We finally escaped South Lake Tahoe and hiked through some high desert before heading into the Sierra! Let’s go!!!
Farewell Oregon! Hello (again) NorCal! But not for long. Had a blast hanging out with friends, old and new in Ashland before making our way to the border. Met one of the best trail angels, Big Mama there who shuttled us everywhere while refusing any donations. You’re amazing! It was a huge relief to connect our footsteps from Canada after the McKinney fire forced us to flip. The previously closed section between Seiad Valley and Etna was dope! It was bittersweet leaving Etna to start hitching back to South Lake Tahoe to pick up where we left off. I really miss you guys @gwebsterb and @cole.pc It was a blast hiking with y’all! Took us only 5 hitches (Weed to Shasta to McCloud to Old Station to South Lake) with some really awesome folks to reach our destination. Should be back on trail and Mexico bound 🇲🇽 on Wednesday. Time to wrap things up and get this triple crown already!
We could see the plume of smoke from the Cedar Creek wildfire for days from Mount Thielsen Wilderness to Sky Lakes Wilderness. However, this stretch of trail was amazing! Mount Thielsen is apparently the “lightning rod” of the Cascades and I would have loved to summit it to see the fulgurites (spots where the rock was melted and crystallized). That will have to wait another day. The smoke left the views at Crater Lake National Park a bit hazy, but it was still absolutely gorgeous! Plus it marked Frisbee and my unofficial halfway point on the PCT. Sky Lakes Wilderness to Fish Lake was also not disappointing. The forest was thick and there were so many different conifers, plus I saw two bears. Oregon is coming to a close, but it’s been dope!
Walking by the Three Sisters made us feel like we were walking on Mars. By the time we reached Elk Lake Resort, we caught word of a new wild fire just ahead with a PCT closure. Add it to the list! We recruited some new friends to join us on the road walk around the fire the next day. Only about 8 of the first 40 miles involved walking through thick smoke and there was broasted chicken with jojos in town when we finished. After a pancake breakfast at the firehouse the next morning, we took the railroad tracks to Shelter Cove.
Oh geez, I’m so behind! We left Timberline Lodge feeling sluggish and hitched to Government Camp. So glad we did since it was one of our favorite places on trail! We got some incredible views of Mount Hood and Mount Jefferson before passing through the Lionshead burn area. The devastation was huge, but it was still a beautiful section. Saw mountain goats at the base of Three-Fingered Jack before hitching to Sisters, where we had an awesomely unexpected zero (Thanks @wildturkeytrotsthru )! We said goodbye to the #llamas and hiked through a lava rock field as we approached the Three Sisters.
The day leading up to it was socked in with fog, but we made it to Timberline Lodge with some sweet views of Mount Hood. The buffet was all I dreamed of, the lodge was beautiful, and I got to hold the ax from “The Shining” before dippin’ out! My only regret is not summiting Hood before I left, but we’re on a time crunch and it’s a damn good excuse to come back!
Hello Oregon! After taking an alternate and sleeping next to a guardrail on a busy highway, we night hiked across the Bridge of the Gods and left Washington state behind us! Got to celebrate my birthday in Cascade Locks and hike a very scenic alternate back to the PCT munching on blackberries. Tunnel Falls and the whole Eagle Creek stretch was dope! 😍 Hopefully now that most of Oregon is opened back up from all the wildfires, we can finish it up before jumping back down to Echo Lake. 🤞 We shall see!
I made friends with a #marten and saw a cool #waterfall after working my way down from #goatrocks We enjoyed a nice pit stop at Trout Lake then ran into our buddies Walter White and JeffR from the CDT, and back into Flamingo Kid and Yardsale who we hadn’t seen since flipping from NoCal. We also got to enjoy some more #trailmagic thanks to Cowboy and Mrs. Cowboy, and Peppa and his doggo, Pudding. Our bad times seem to be behind us as we get closer to the state border. Finally!
Posted on November 7, 2017March 31, 2018 by Stubbs

We took Route 64 out of Coconino National Forest into Kaibab National Forest on our way to Grand Canyon National Park. Now, I wasn’t too thrilled about visiting the Grand Canyon initially. As far as I was concerned, it was just a giant hole in the ground. However, when I saw it for the first time at Mather Point, it was breathtaking! According to the ranger we spoke to upon arriving, there’s no one view better than another! According to me, if you get sick of looking at it, try again tomorrow and it be new again, and likely will look completely different depending on how the light hits it.

We took the free bus through the so-called “village”, then did a short hike along part of the Bright Angel Trail. When we returned to the rim, it was snowing and we saw a large herd of Rocky Mountain Elk. We grabbed lunch at the Bright Angel Lodge cafeteria (which reminded me of a nursing home), then visited Verkamp’s visitor center before taking a short hike to the Trail of Time, then to Yavapai Point and the Geology Museum, then back to Mather Point.

Showers were needed, so we left the park to stay in the town of Tusayan where we found the cheapest rates at the Red Feather Lodge.

Before returning to the park, we had plans to find a free place to sleep along one of the nearby forest roads, so we grabbed coffee across the street, watched the funerals on TV for the victims of the Boston Marathon bombing which had occurred 3 days prior, then took off along Forest Road 328 to see what we could find. We successfully found a couple sites and saw a cute, little Kaibab Squirrel on the way out as we returned to the Grand Canyon.

We looked around some of the shops and the Backcountry Information Center before walking along the rim trail by the Bright Angel Lodge. We stopped frequently during our 7 mile hike along the rim to Hermit’s Rest and saw a number of animals along the way, including a Rock Squirrel, Cliff Chipmunks, ravens, a Hairy Woodpecker, and various other bird species. 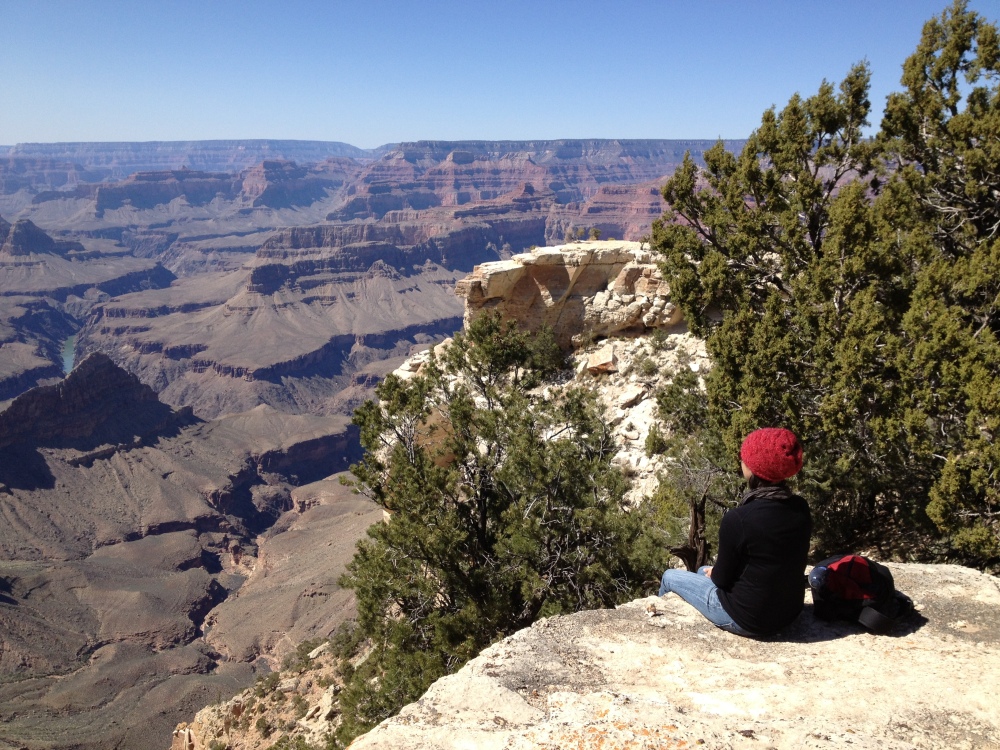 We saw a Mule Deer and more elk during the bus ride back to the village. We were starving, so we bought a pizza back in Tusayan where we would have our second celebrity sighting when I spotted Jason Bateman pick up a pizza to go. We took the forest road back to camp and saw a Desert Cottontail along the way. Trevor had bought a Pendleton blanket at one of the shops which turned out to be super warm that night!

I’m a very light sleeper and was woken up to headlights shining on our van at 3 in the morning. I woke Trevor up and then there was banging on our window. We had painted some of our windows black and had decals on the others so it was difficult to see out of them at night. We were both a little freaked out and Trevor cautiously cracked the van door open to find a very creepy woman standing outside. She said she was lost and had been driving in circles all night and couldn’t find her way out of the forest. He pointed her in the right direction, then quickly closed and locked the door. After she left, he was mad that he had opened the door. It could have ended very badly for us if there were more than one person with ill intentions on the other side. I decided to keep my pepper spray in closer reach from then on.

A jeep full of tourists drove by our van in the morning, and I smiled and waved even though I hated them. I now know how indigenous people feel when Westerners travel to their countries, pointing and taking pictures of them. “Look! Stinky freeloaders in their natural habitat! Toss them some food!”

We discussed last night’s incident and Trevor pinpointed the exact time we had seen another car drive by headed in the direction she had come from, and she had indeed been lost in the forest for a very long time. She was probably a lot more terrified than we were to knock on some stranger’s van in the middle of the night, and in the middle of nowhere as far as she knew.

Back at the Grand Canyon, we finished the other half of the rim trail, Mather Point to Yaki Point. During the trip, we saw an elk charge at a woman who was getting a little too close, and a very photogenic squirrel eating seeds along the rim.

We took the bus back to the visitor center, then took the van to the village to wander around the shops and lodges nearby. Upon returning to our van, we found a note left on our windshield which read, “Oh MD, My MD! + NOLA too! Natty Boh till I DIE!” I suppose someone spotted our tag and the the Maryland flag decal we had covering one of our windows, and also was a fan of the New Orleans stickers too.

“Natty Boh” refers to a beer that used to be brewed locally in Baltimore, Maryland called “National Bohemian.” If you’re a beer snob, I would definitely not recommend drinking it. People drink it in Baltimore like hipster drink PBR. It’s garbage. Speaking of PBR, Pabst Brewing Company was the one who bought them out. We appreciated the fan mail though! Small world!

We returned to Tusayan, grabbed two “loafs” of wood and some groceries, then returned to our camp site to build a fire and cook Chicken Alfredo for dinner.

The fire was pleasant and although we heard a weird high pitched animal noise during the night, there were no creepy ladies tapping on our windows.

Jump Back to Part 16: Yuppies in Pink Jeeps & Dark Skies

Jump Ahead to Part 18: A Bad Bus Driver & Everything Turns Black-and-White