Greetings from Key West! 🐓🏝🏴‍☠️ We reached our goal on Christmas Day!🎄When we got through the crowd to touch the buoy and take our picture, we accidentally angered a mob of people. 🤭 Apparently tourism has gotten so bat shit crazy down here as compared to our previous visit that there’s a line to get a picture at the southernmost point.🤷🏻‍♀️ Sorry, not sorry! We had to return early this morning to get more appropriate pictures. Happy Holidays Everyone! 🎉
Seven Mile Bridge to Bahia Honda to Big Pine Key! The scenery and the weather keeps getting better!
Fueled up on some #cubancoffee ☕️ as @trevtrevorwhatever and I jotted more islands off the list and dodged thunderstorms. Thanks again @justin_rousey for letting us crash! Keep on living the dream, buddy! 🤘You’re doing it right!
Goodbye Florida mainland! We got the truckers to honk and yelled “Maryland!” to the passing cars with MD tags as we fought the wind on our walk to Key Largo. We tried sleeping next to a church but had to relocate to an awning at 2 am when it began to rain. There, we made friends with the local law enforcement as we waited for the sun to rise, then got some #keylimepie at Harriette’s before hoofing it to the rest of the #floridakeys
62 Miles in 24 hours! And we didn’t stop there, continuing another 7-8 more. We left the #floridatrail southern terminus at 3am Thursday the 19th and were in Homestead the same time the following day. I just want to thank @soflohiker for delivering our resupply which we pretty much destroyed along the way; the awesome @bigcypressnps staff, especially Don and his wife who brought us a pizza; @stephenwoodworth3g and Gonzo for the fry bread and good gab; the @coopertownairboatride staff, especially Antonio for the coffee and nice conversation; and my feet which carried my lethargic ass all the way to Florida City so I could inhale Golden Corral and enjoy LivePD in a comfy hotel bed before taking US-1 to #keywest The people you meet traveling 3 mph make the journey as special as it is. Thank you! 🙏
Florida Trail Complete! 🙌 Stayed the night in a chickee before leaving the Seminole Reservation for the #swamp Big Cypress was pretty dry to our misfortune. Instead of wading through water most of the time (which would’ve been preferred), we struggled covering ground in the #mud and muck during the first half. We were very dehydrated during the second half, but managed to find enough water to pull through. Then it dumped rain on us overnight, the ultimate send off from the #floridatrail This trail was brutal, but beautiful and I’m glad I stuck through it til the end! Next stop, Key West! 🤘🌴🐓
The list of #wildlife that @trevtrevorwhatever and I have seen keeps growing! There have been a countless number and variety of birds and insects. Mammals: ~6 #otter , 20+ #opossum all within 2 hours of night hiking, a #grayfox , bats, rabbits, raccoons, 1 #skunk , and wild hogs. Reptiles & Amphibians: many #gophertortoise , other turtles, #frog , toads, many #alligator , venomous (coral, pygmy rattlers, #cottonmouth , copperhead) and non-venomous snakes. There have also been common domestic animals like cow (A LOT of them), goats, chickens, horses, and sheep, and oddly placed, random ones like emus (on two separate occasions) and bison. Out of all the trails I’ve hiked so far, the #floridatrail one delivers the most critters!
Hiking along the #dike on the west side of #lakeokeechobee didn’t deliver views of the lake, but it was the quieter route and we saw a lot of wildlife along the way. We also saw a lot of rain! It wasn’t my favorite stretch, but it was memorable!
After sprucing up our sulfur water with some wild lemons 🍋 , we left Three Lakes WMA to start a miserable road walk along FL-60, dodging busy traffic. Then we visited River Ranch Resort to grab a pricey resupply. Scrub fields with mummified fish bodies followed before crossing the lock and entering Kissimmee Prairie Preserve. I ended up peeing in front of a wildlife cam as we left there. Fml. 🤦‍♀️The good news is we’ve seen a ridiculous amount of wildlife afterwards. I’m just not too pleased to be a part of it. Having two dumb rednecks on an airboat point their rifles towards us, also not a good time.
Posted on January 2, 2018March 31, 2018 by Stubbs

We left the Walmart parking lot in Grand Junction, CO to take US-50 East to Black Canyon of the Gunnison National Park (a place I had never heard of). On our way to the visitor’s center, a German Shepherd came out of nowhere and ran in front of our van and we nearly hit it. We were mad to see the dumbfounded campers slowly walking towards us to retrieve their dog that they weren’t watching. One of the last things we would ever want to experience is to hit and kill someone’s dog, even if the owners were stupid. 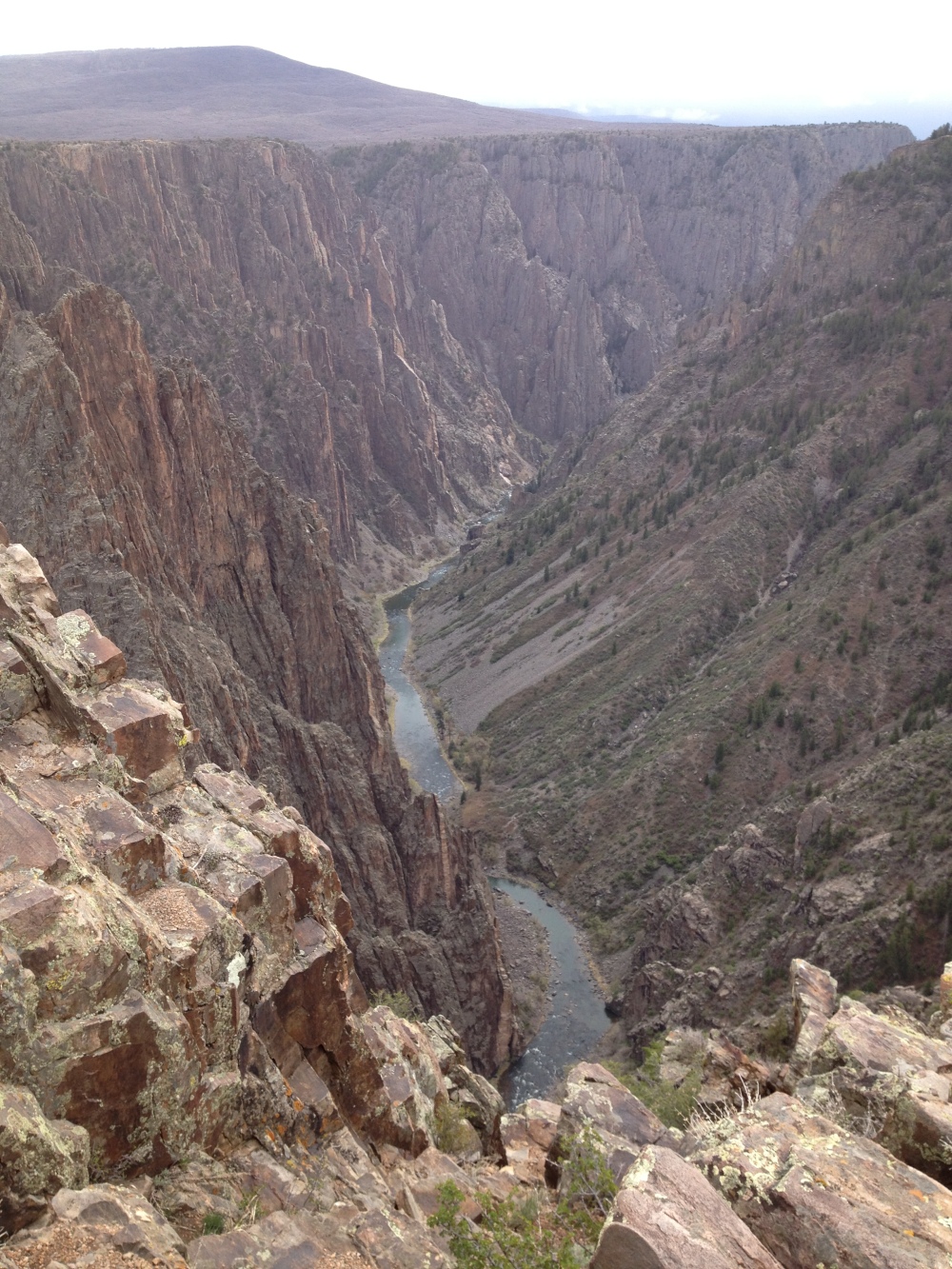 We registered for a camp site inside the park at the South Rim Campground since it was pretty cheap. We watched lightening strike the mountains in the distance through the massive windows of the visitor’s center as a thunderstorm rolled in.

Then, we were off to the town of Montrose to check out the historic district. We walked into one of the stores called “The Wild Rose” and a woman who resembled a gothic Cyndi Lauper came over to greet us. Trevor asked me, “What the fuck is that?” as she approached. I smacked him. I’m pretty sure she heard him. She was super nice, although her store was an odd combination of styles. We would see the words “wild rose” wherever we went afterwards as a constant reminder of this peculiar lady. I even named my new red Subaru Forester “Wild Rose” in her honor.

We grabbed coffee at The Coffee Trader in town before returning to the park for some serious down time. It began to sleet, so we spent most of the evening in the van. I overheard a howling sound from an unknown source which resulted in an eerie walk to the pit toilet later that night. I expected something to eat me at any given moment, but all I ended up seeing was a mouse that I hoped would not follow me back to the van. I’m food aggressive and he wouldn’t last long.

The next morning in general was pretty laid back. We decided to register for a different camp site for the night so we could get one with an electrical outlet so we could charge our batteries. We saw a rain cloud blowing in our direction so we quickly hooked the batteries up, covered them with a tarp, then hopped in the van to listen to the radio.

We still hadn’t really explored the park, although it would be our second day there, so we decided to cruise by all the view points marked on the map. We first stopped at the Pulpit Rock Overlook, then Cross Fissures, then Dragon Point. 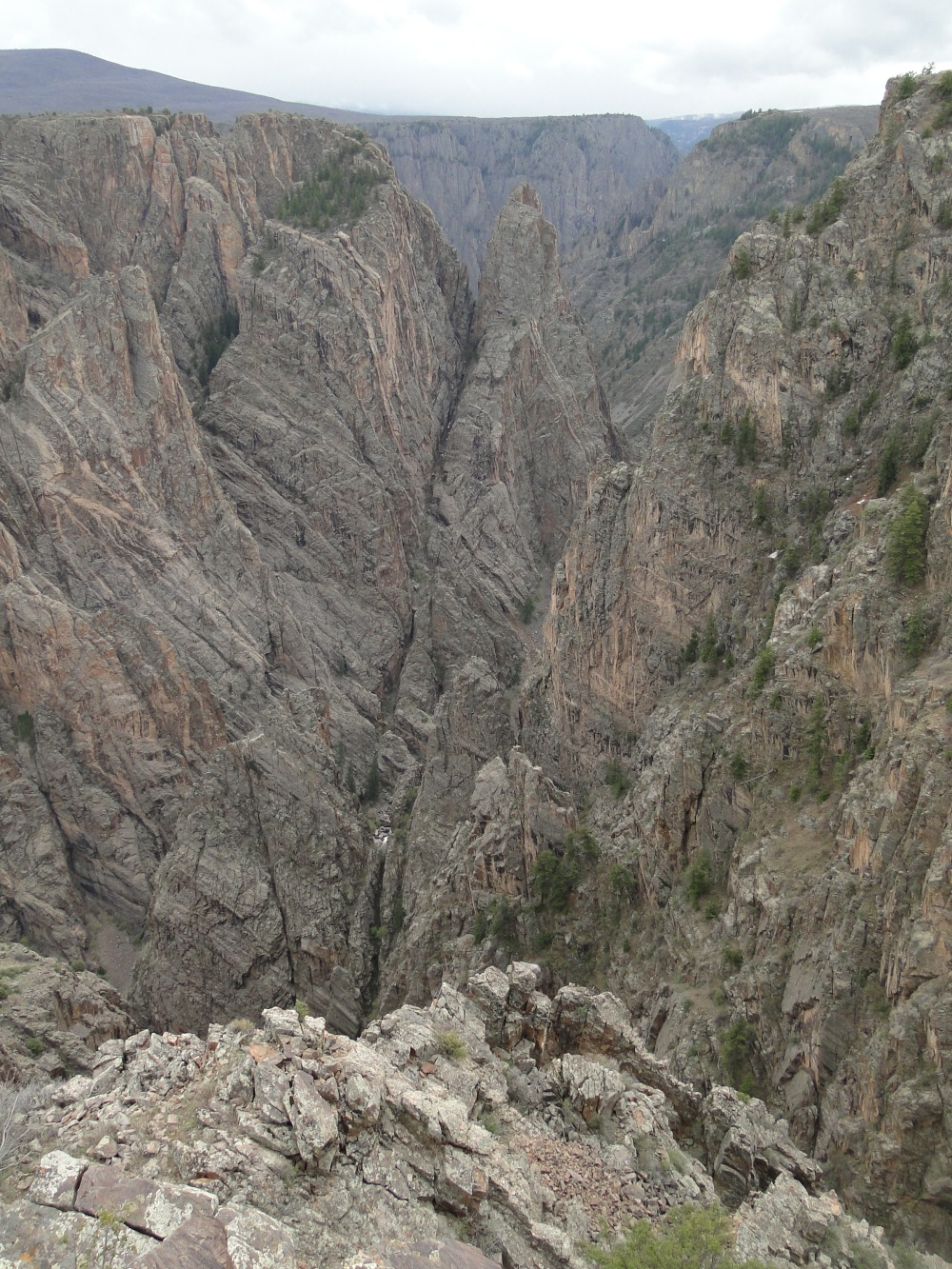 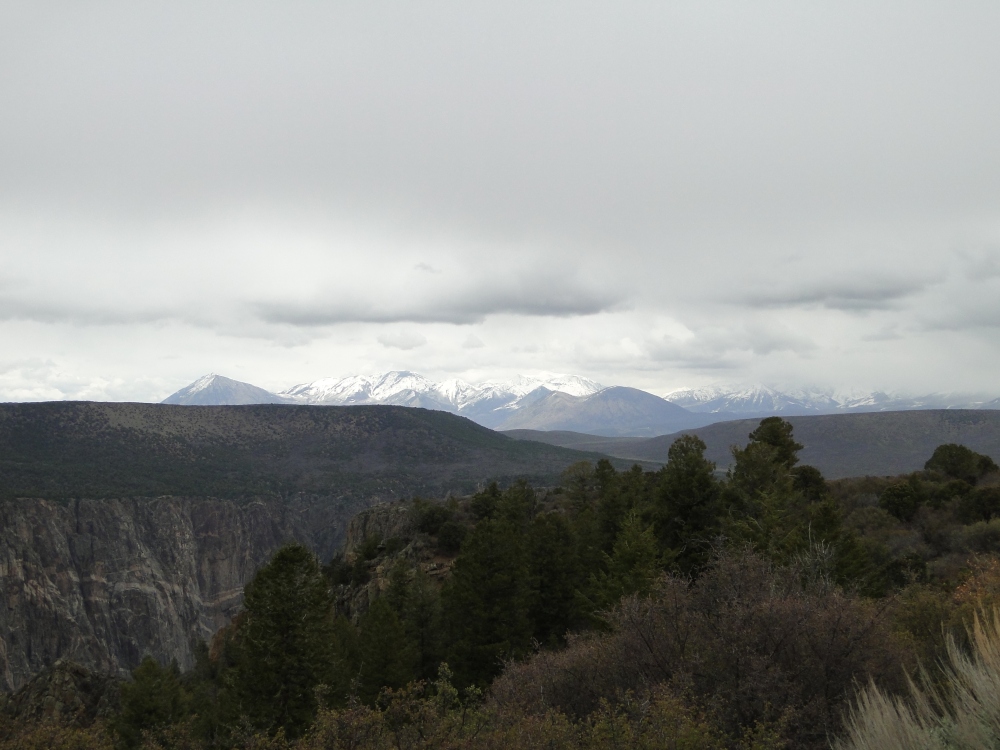 They were all different views of the black cliffs with the Gunnison River below and snow-capped mountains in the distance. We got out at the High Point parking lot and took a short walk along the nature trail.

We ate and watched all the fat robins hopping around doing the same, then we returned to Montrose briefly before spending the evening lounging around our camp site.

Snow was beginning to fall once we woke up so we quickly packed up the batteries and worked our way down the mountain. 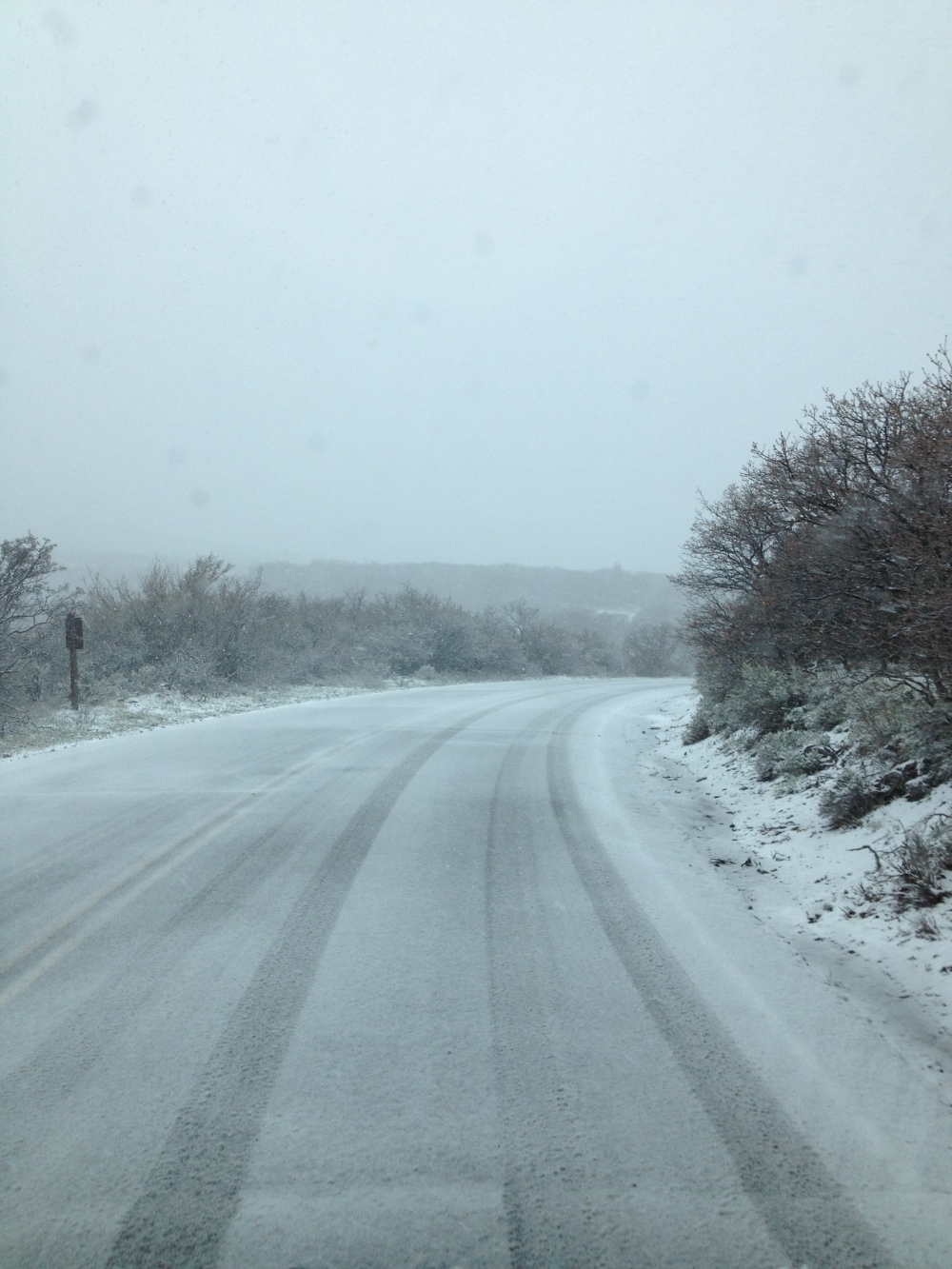 As the snow started coming down heavily, I worried that we may not make it and that one of us would have to resort to cannibalism. Did we find some strange drifter to eat out of desperation? Did I end up eating Trevor? Did he end up eating me? Is this really Stubbs writing, or will this be one of those M. Night Shamalama-ding-dong twist endings and he’s been writing under my guise the whole time? Tune in next week to find out!