It was a nice day to unwind with a cup of coffee in Vedauwoo. I listened to the wind blowing, the birds chirping, the frogs croaking, the flies buzzing around and could hear the horn from the train in the distance. Trevor took the “commanding lead” in outdoor poo (we involuntarily had been competing).

I did some reading while being visited by fat chipmunks. Trevor went to look for more bouldering sites. When he got back we collected firewood. Later that evening we started a fire and watched the lightening illuminate the night sky.

In the morning, we collected a huge pile of firewood and checked out some rock formations, then we set up our hammocks, ate lunch, then threw the Frisbee back and forth. 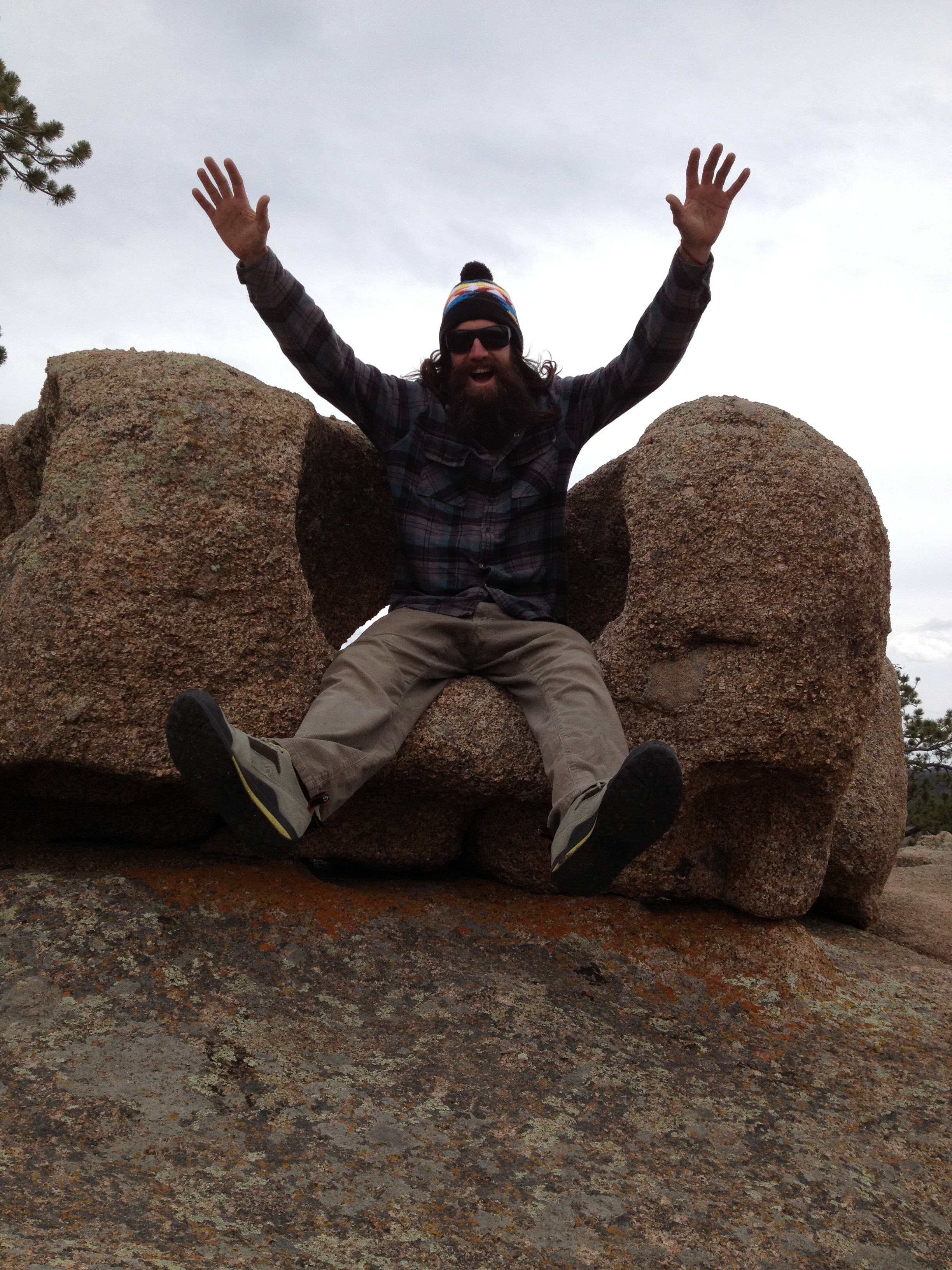 A storm rolled in so we hopped in the van to wait for the rain to stop. It wasn’t letting up, so we made a quick stop in town to use WiFi at “The Grounds,” grabbed a few things at Walmart, then rushed back to our site.

While we were gone, a lovey dove couple had taken our site and were using all of the firewood that we had collected. We couldn’t really get mad since there weren’t any designated sites, it was more on a first come first serve basis. So we ended up parking nearby, quickly made a stretcher and grabbed more firewood before it got too dark. Everything was cold and wet from all the rain, and we had to fight with the wind to get a fire started. The wind started blowing coals everywhere and it was blowing so hard that we weren’t feeling any of the heat, so we decided to put the fire out.

Once we got settled in the van, a group of entitled teenagers parked right next to us, and we asked them not to use our firewood that took us an hour to collect. They lied and said they had their own as they proceeded to burn all of ours throughout the night. I secretly hoped they’d catch their tents on fire when they decided to blast their crappy music until 1:30 am in defiance. I didn’t sleep well. I was too mad. In the morning, we’d see that they had flung piles of trash all over the place for someone else to clean up. Such sh*theads.

It was another windy day and after a rough night of sleep, we were ready to leave Vedauwoo. We took US-30 to look around for more boulder spots (The Schoolyard, Telephone Road boulders and Coyote rocks), although we did very little climbing. In between, we came across the Lincoln Highway Monument which was an odd statue of Abraham Lincoln with no body.

A storm rolled in so we headed into Laramie to meander around the shops. We went to a place called “Atmosphere Mountain Works,” and the owner gave us some travel tips and suggested a few places to check out in Wyoming and the neighboring states.

After grabbing coffee at “The Grounds,” and resupplying at the grocery store, Trevor was starting to feel dizzy. We browsed some more of the shops before calling it an early night and heading to the Walmart parking lot.

Jump Ahead to Part 34: Altitude Sickness & The Hobo Pool