Farewell Oregon! Hello (again) NorCal! But not for long. Had a blast hanging out with friends, old and new in Ashland before making our way to the border. Met one of the best trail angels, Big Mama there who shuttled us everywhere while refusing any donations. You’re amazing! It was a huge relief to connect our footsteps from Canada after the McKinney fire forced us to flip. The previously closed section between Seiad Valley and Etna was dope! It was bittersweet leaving Etna to start hitching back to South Lake Tahoe to pick up where we left off. I really miss you guys @gwebsterb and @cole.pc It was a blast hiking with y’all! Took us only 5 hitches (Weed to Shasta to McCloud to Old Station to South Lake) with some really awesome folks to reach our destination. Should be back on trail and Mexico bound 🇲🇽 on Wednesday. Time to wrap things up and get this triple crown already!
We could see the plume of smoke from the Cedar Creek wildfire for days from Mount Thielsen Wilderness to Sky Lakes Wilderness. However, this stretch of trail was amazing! Mount Thielsen is apparently the “lightning rod” of the Cascades and I would have loved to summit it to see the fulgurites (spots where the rock was melted and crystallized). That will have to wait another day. The smoke left the views at Crater Lake National Park a bit hazy, but it was still absolutely gorgeous! Plus it marked Frisbee and my unofficial halfway point on the PCT. Sky Lakes Wilderness to Fish Lake was also not disappointing. The forest was thick and there were so many different conifers, plus I saw two bears. Oregon is coming to a close, but it’s been dope!
Walking by the Three Sisters made us feel like we were walking on Mars. By the time we reached Elk Lake Resort, we caught word of a new wild fire just ahead with a PCT closure. Add it to the list! We recruited some new friends to join us on the road walk around the fire the next day. Only about 8 of the first 40 miles involved walking through thick smoke and there was broasted chicken with jojos in town when we finished. After a pancake breakfast at the firehouse the next morning, we took the railroad tracks to Shelter Cove.
Oh geez, I’m so behind! We left Timberline Lodge feeling sluggish and hitched to Government Camp. So glad we did since it was one of our favorite places on trail! We got some incredible views of Mount Hood and Mount Jefferson before passing through the Lionshead burn area. The devastation was huge, but it was still a beautiful section. Saw mountain goats at the base of Three-Fingered Jack before hitching to Sisters, where we had an awesomely unexpected zero (Thanks @wildturkeytrotsthru )! We said goodbye to the #llamas and hiked through a lava rock field as we approached the Three Sisters.
The day leading up to it was socked in with fog, but we made it to Timberline Lodge with some sweet views of Mount Hood. The buffet was all I dreamed of, the lodge was beautiful, and I got to hold the ax from “The Shining” before dippin’ out! My only regret is not summiting Hood before I left, but we’re on a time crunch and it’s a damn good excuse to come back!
Hello Oregon! After taking an alternate and sleeping next to a guardrail on a busy highway, we night hiked across the Bridge of the Gods and left Washington state behind us! Got to celebrate my birthday in Cascade Locks and hike a very scenic alternate back to the PCT munching on blackberries. Tunnel Falls and the whole Eagle Creek stretch was dope! 😍 Hopefully now that most of Oregon is opened back up from all the wildfires, we can finish it up before jumping back down to Echo Lake. 🤞 We shall see!
I made friends with a #marten and saw a cool #waterfall after working my way down from #goatrocks We enjoyed a nice pit stop at Trout Lake then ran into our buddies Walter White and JeffR from the CDT, and back into Flamingo Kid and Yardsale who we hadn’t seen since flipping from NoCal. We also got to enjoy some more #trailmagic thanks to Cowboy and Mrs. Cowboy, and Peppa and his doggo, Pudding. Our bad times seem to be behind us as we get closer to the state border. Finally!
Goat Rocks blew my mind! See for yourself. 😯
More familiar faces on trail heading to White Pass! Ran into Monkey Man from the AT ‘17 in the cabin, and more of our beloved CDT homies! Our luck has improved too. After missing trail magic two days in a row, we started receiving some of the good good from some wonderful trail angels. The end of our trek through Washington state is in our crosshairs, and as much as I adore it here, I’m ready to hit that milestone!
Posted on February 2, 2018March 31, 2018 by Stubbs

After staying the night in Sinks Canyon State Park, we fed the fish at the “Popo Agie Rise” (where the river reappears after flowing underground from the “Sinks”), checked out the park’s visitor center where I asked the ranger where some good hiking trails were that lead up the cliffs, and before hitting the trail, we walked to the “Popo Agie Sinks” (where the river flows and disappears into the caverns and reappears hours later at the “Rise”).

We drove to the trailhead and hiked up to the cliffs spotting several anchors embedded in the rock wall left by climbers. The views were great!

We hiked the Sage Draw Loop Trail by the campground before driving back to Lander to eat lunch in City Park. Meth head mohawk man was back at it, guarding the bathrooms for reasons unknown.

After we ate, we headed over to “Elemental Performance & Fitness” to use their indoor climbing gym. It was only $8 to use the gym for the day and included showers (with a towel), which we really needed at that point in time. I suspected my climbing shoes were too small. They’re supposed to be tiny, but my feet were feeling like sausages. We climbed some of the easier routes, while scary thug meatheads were in the other room yelling as they were pumping some serious iron.

Before leaving Lander, we stopped by “Wild Iris” to thank the guy for all his help. As we were driving out of town, we could see the storm from miles away out in the mountains before the rain reached us. We drove along the Wind River and saw many deer on the side of the road as we approached the cute little town of Dubois.

It was nighttime, so everything was closed except for the bars and motels as we passed it by. We decided to do a U-Turn and stay there the night. It seemed like we were driving in circles for hours trying to find a discreet place to park. Even though it was nighttime, the town was very active, and several areas had signs specifically stating “No Overnight Parking.” We checked some of the motels, but they were asking for too much money. We tried to get them to lower the price since it was so late at night, but none of them budged. We checked the laundromat to see if it was open 24 hours, and it wasn’t.

We settled on a spot close to the library. It was a busy road and every car that passed by snapped me out of my slumber. I was waiting for someone to start knocking on our window at any second to force us to leave. It was going to be a restless night!

We got lucky and didn’t get disturbed overnight. We got up really early to move the van and to check out the town of Dubois. Our first stop was “Tammy’s Coffee Haus” to fill up on some caffeine to bring us back to life. An old man poked fun at me and pointed at my purse asking why I was carrying around a feed bag. We checked out some crazy antler art at one of the stores and saw the “World’s Largest Jackalope Exhibit” in another. I couldn’t resist. I had to sit on it. I didn’t care how stupid I looked.

We were mildly disappointed since the town looked more happening at night with all the neons lit up. We left Dubois and got stuck in a heavy fog while traveling up the mountain. Trevor’s altitude sickness was getting so bad he had to pull over and have me drive.

I drove into Teton National Forest and the fog began to clear. We could see the Tetons in the distance and got even more excited when we approached the sign for the Grand Teton National Park. 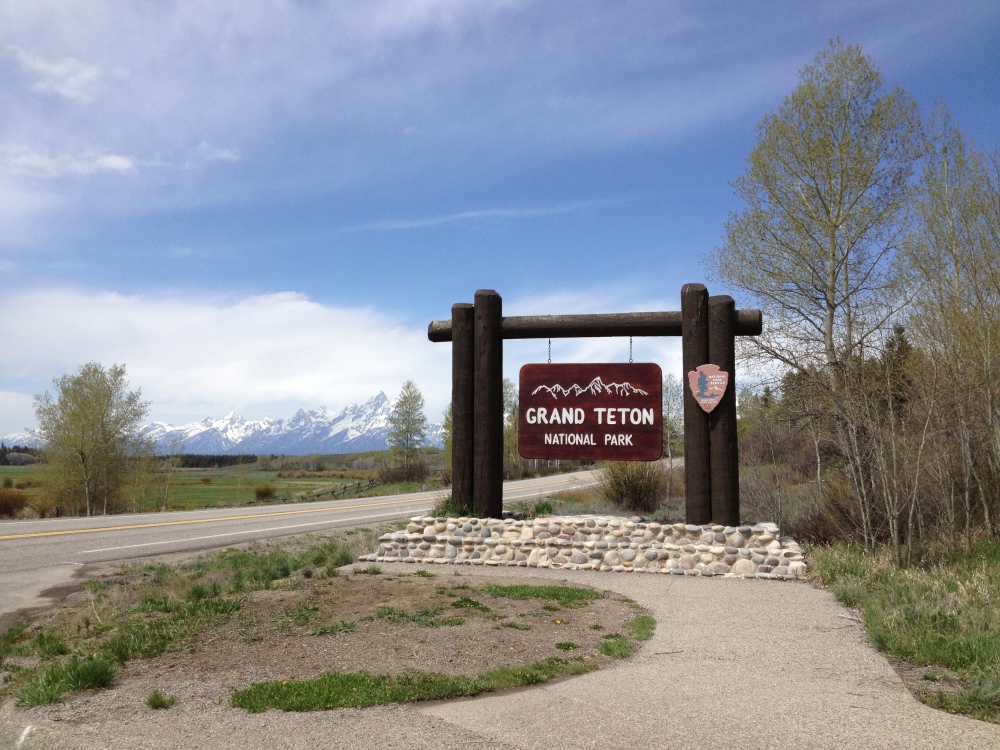 Jump Back to Part 35: Great Coffee, A Dead Moose & A Meth Lab