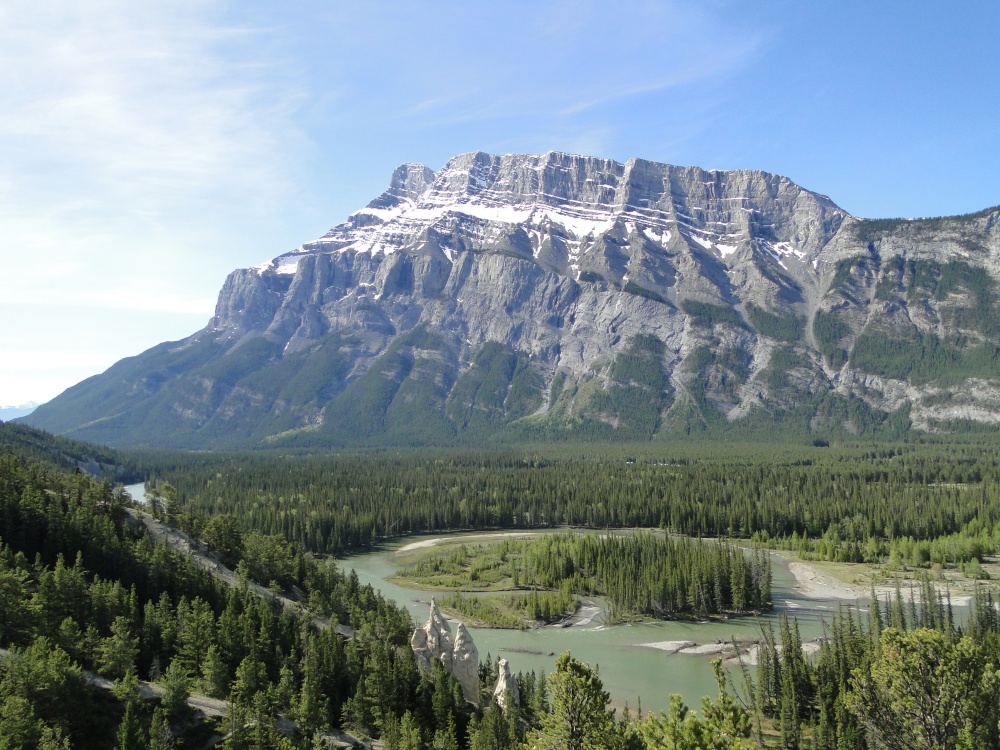 We admired the mountains and  hoodoos during breakfast before returning to Banff, stopping first at “Rude Boys” where the shop keeper was really chill and gave us free stickers. We talked a bit about music and exchanged recommendations. He offered to text us when the other shop was open since Trevor was planning on getting a massive Rude Boys sticker to put on the front of the van. 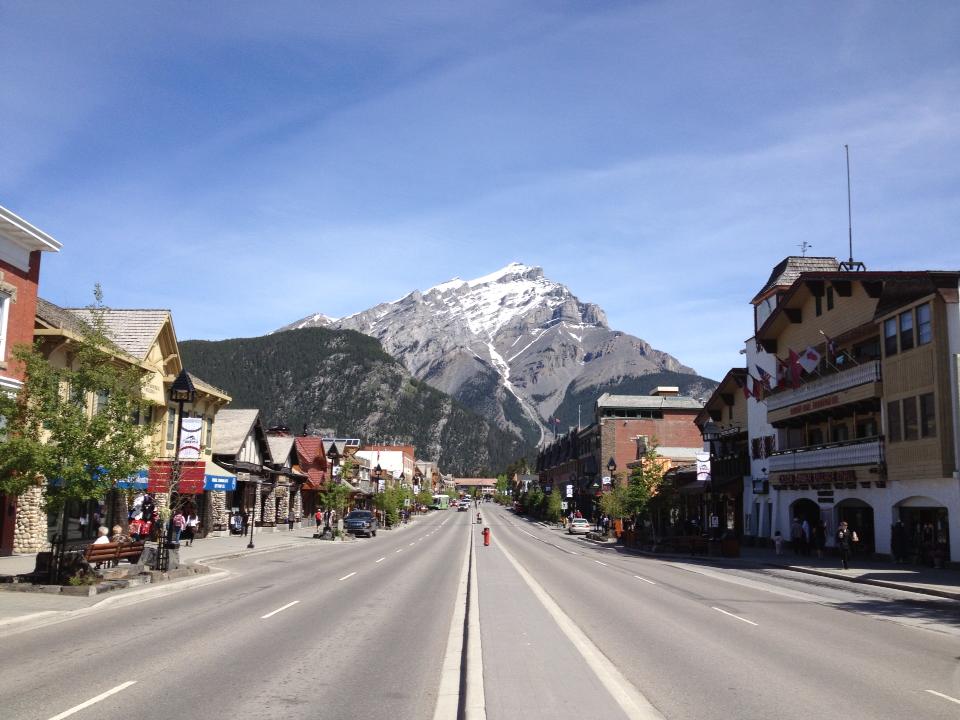 We shopped around before receiving the text to inform us that the “Rude Boys” store was open, they’d be reserving the sticker for us, and there’s “a lot of cool shit on sale.” We shopped at a few other stores before heading back over. A really cool chick was working there who hooked us up with more free stickers for the van and gave us a few travel suggestions, one of the being Yosemite National Park. She pronounced Yosemite, “Yo-sem-myte” in jest since she claimed her dad always pronounced it that way when they traveled there.

We left the town of Banff to check out one of the lookout points which was mainly just a view of a hotel. At least it was a nice looking one. 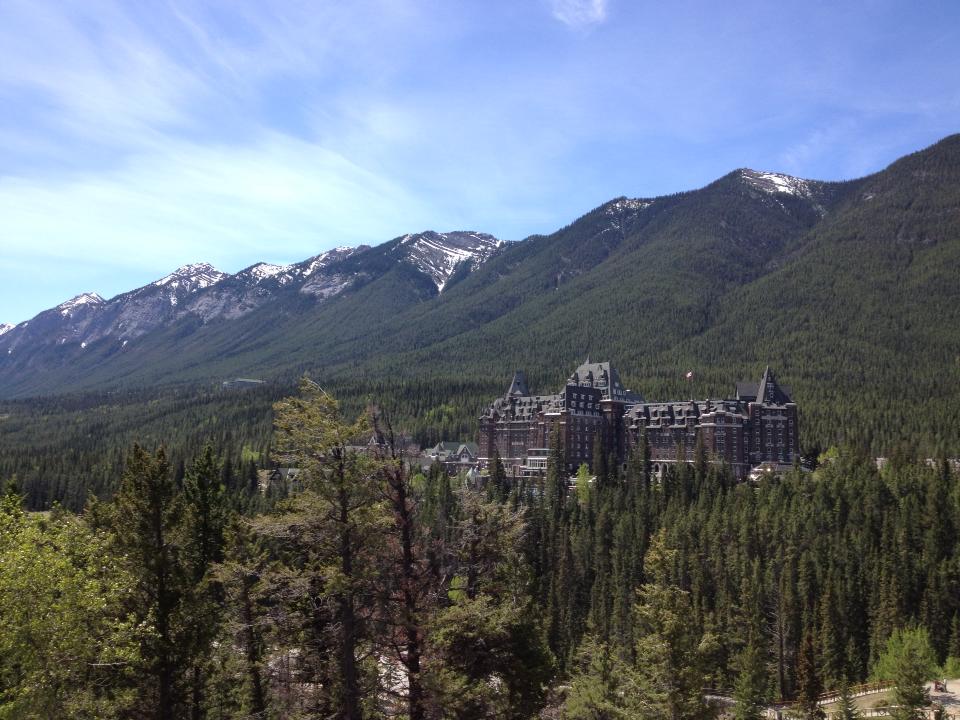 Then we took Rt. 1 to a view of the Canadian Rockies before arriving at Lake Louise, AB. We were shocked to see that the Lake Louise campground was surrounded by an electric fence. Apparently the grizzlies were bad in the area.

After locating our site, we drove to Lake Moraine where we enjoyed the views, then saw some familiar faces. It was our Alabama friends from Glacier, and they were just arriving as we were heading out. We said hello before heading to Lake Louise and taking the trail around the lake where we saw some rock climbers scaling the mountains. 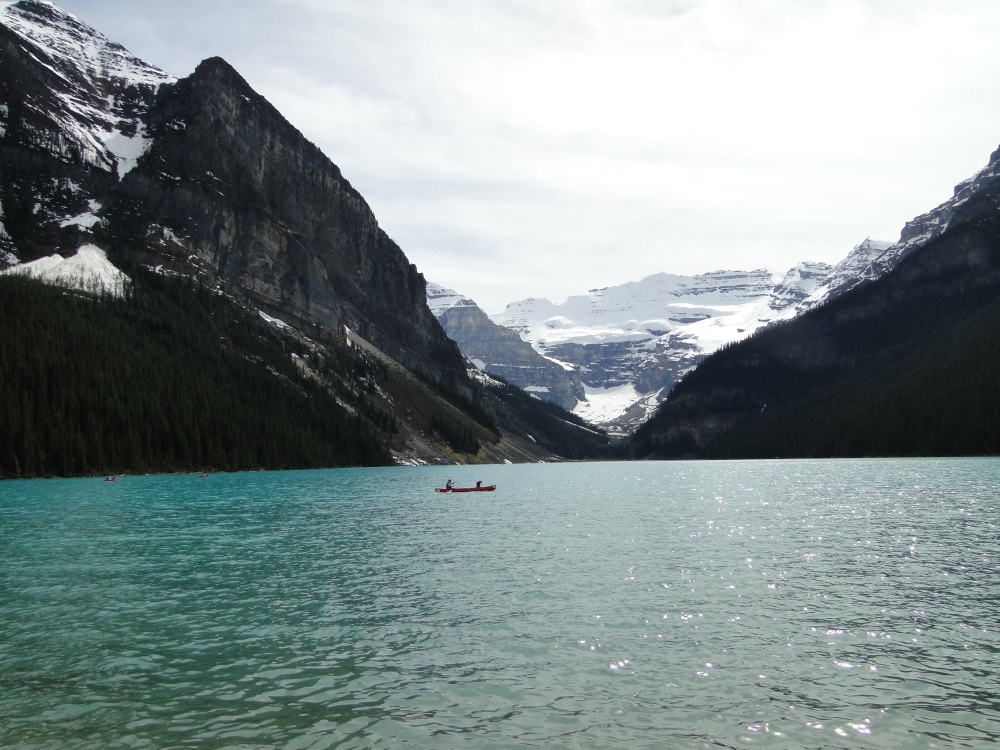 After paying town a visit, we returned to the campground where we did some serious lounging. I could hear a train in the distance as I filled out postcards and journaled, while Trevor listened to music, played on his phone and exercised. Before turning it in, we took a short walk. I was nervous opening the gate to the fence as it buzzed while we made our exit. No one was electrocuted that night.

We went to Javalanche Cafe for coffee and made our exit from Lake Louise. There was no sign welcoming us to British Columbia as we made our way through Yoho National Park. There was however, a lot of construction work and asshole drivers. Once we arrived in Golden, BC, we located a British Columbia Visitor Center which had a sign I could get my photo by.

The lady at the front desk was very helpful and gave us a few suggestions of places to go. She was the first Canadian we had met who had heard of Maryland. She actually had a few friends from Havre de Grace which is a little over an hour from where we live.

We drove into town and went to Bacchus Book Store and Cafe where we grabbed lunch. I enjoyed their “Dread Lox Panini” before we hit the road again. We entered Canada’s Glacier National Park and re-entered the Pacific Standard time zone. Our driving continued through Mount Revelstoke National Park, taking a short break in Revelstoke, BC, then continued on passed 3 Peaks ghost town, an Enchanted Forest, Crazy Creek Suspension bridge, a waterfall, and a campground. We later regretted not soaking up all the tourist traps. It rained as we passed Salmon Arm Lumber Yard which had trees floating around in Shuswap Lake. We nearly slammed into a broke down camper van before taking a nice break at a Walmart in Kamloops, BC.

As we carried on, the metric system continued to through me off. I kept double taking 410 km, which is certainly not the same distance as 410 miles. Speed limits would get my head foggy too. 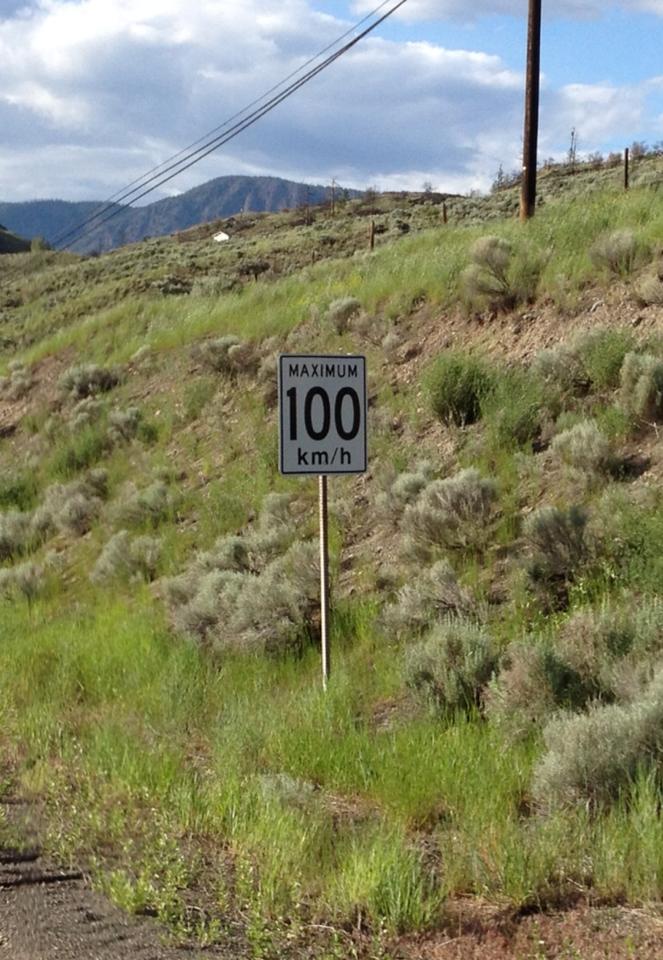 We had nice views of Kamloops Lake, grabbed gas in Savona, passed a lot of farmland, then took Hwy 97 North to Hwy 99 at the Cache Creek Scenic Drive. The scenery was amazing as we traveled along hills and around sharp turns through Bridge River. 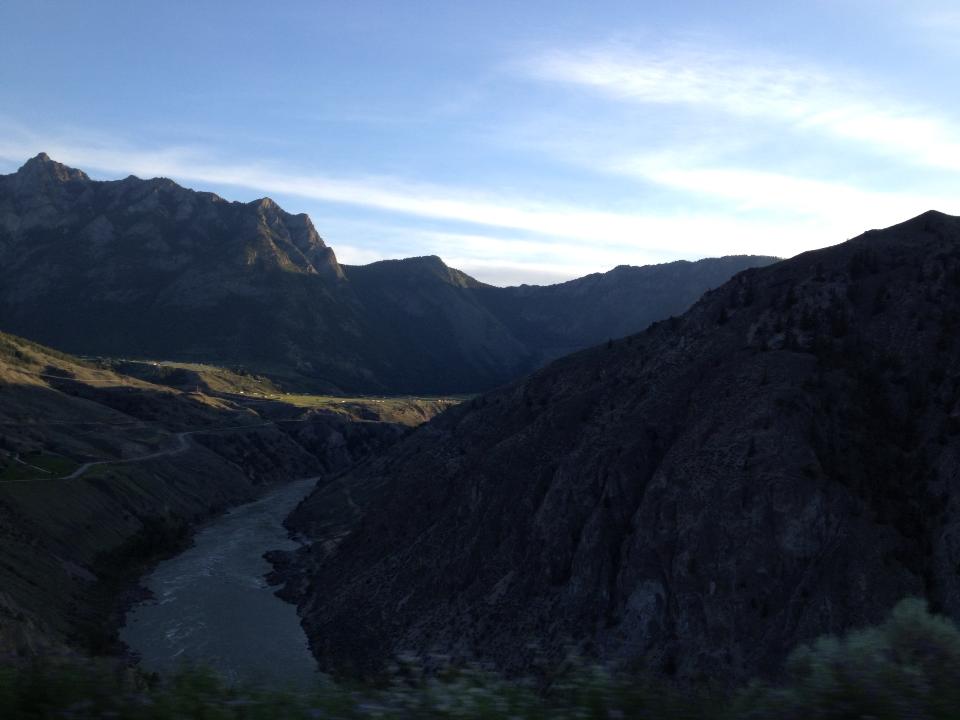 We stretched our legs at Lillooet, BC then drove through the scenic mountains before we made it to our final destination for the night, Pemberton, BC. Or so we thought.

Jump Back to Part 45: Border Patrol Interrogation & Other Unpleasantries in Canada