I did a thing today. Probably won’t do it again. But I also said I wouldn’t run 13.1 miles ever again, sooo… 🤷🏻‍♀️Thanks @trevtrevorwhatever for the support, and super rad to catch up with you @wildturkeytrotsthru Thanks for the hospitality!
9/9/21 - Mission Accomplished! 🤘
Montana! You pretty!
Yet again, Montana brought the hiker friendliness in Augusta, and a sweet sunset too! Once we were able to force ourselves to leave, we were off to “The Bob” and finally got to see the Chinese Wall. We’re officially in the heart of grizzly country, y’all! 🐻
The sweet views continued all the way to Augusta!
Had an awesome birthday which I celebrated with my stinky, freeloading #hikertrash tramily, the wonderful people of Lincoln, and Daryl the Sasquatch. The hike from Rogers Pass was just as amazing as the hike into it after we hunkered down in a yurt to avoid the rain. More climbs, but a lot of ridge walking by rock ledges and towers.
No more smoke, but the days have been windy and the nights have been cold. We visited an amazing outfitter in the middle of the trail, got to see Golden, a familiar face from the AT (2016), and lots and lots of cows! I had been in a bit of a funk lately, but the ridge walk right before reaching Rogers Pass snapped me out of it!
Got stuck in the Butte vortex. We hitched in, hitched out, hiked to the north side then hitched back in. Pizza Ranch was our second home. Eventually we made our way to Helena, our second vortex. Before our arrival, we got pounded by hail and rain. The wind was blasting through the trees so hard, they were snapping like twigs behind us. The people of Helena were beyond hiker friendly. We got stuck a second day when a girl working at the brewery let us crash at her place for free, hot tub included! Life’s good!
The road walk continues. Nevada City to Twin Bridges to Silver Star to Butte! Time for a couple zero days!
Posted on March 19, 2018March 31, 2018 by Stubbs

We took I-5 South to Route 410 East, and took a brief stop in Bonney Lake, WA for coffee. There was little scenery as we drove through Mount Baker-Snoqualmie National Forest since most of the trees were cut down. I was disappointed when we arrived at Mount Rainier National Park since most of the roads were closed due to snow. It was also too foggy to see most of the views that would have been visible otherwise.

Feeling a little defeated, we took Route 123 to US Route 12 West through Gifford Pinchot National Forest and continued driving in the rain over the bridge to the state of Oregon. We drove around in circles to find another nonexistent Welcome Center. A homeless guy told us how to get to one, telling us, “That’s a nice place to take a picture.” Well he thought he was telling us how to get to the “Welcome” Center, but ended up directing us to an RV Park that had “Welcome” flags hanging out front of it. It’s the thought that counts, right? Before entering downtown Portland, OR, we watched people play ultimate Frisbee at a nearby park.

The dream of the 90’s is indeed alive in Portland and I was loving it! It was a small city without all the chaos. There were a lot of cute shops and a whole block of food trucks. It was hard to decide where to eat! We settled on a late dinner at a food truck called “Saaj Baghdad”. I got the Shawarma Chicken and Trevor got the Saaj Chicken, both were delicious. 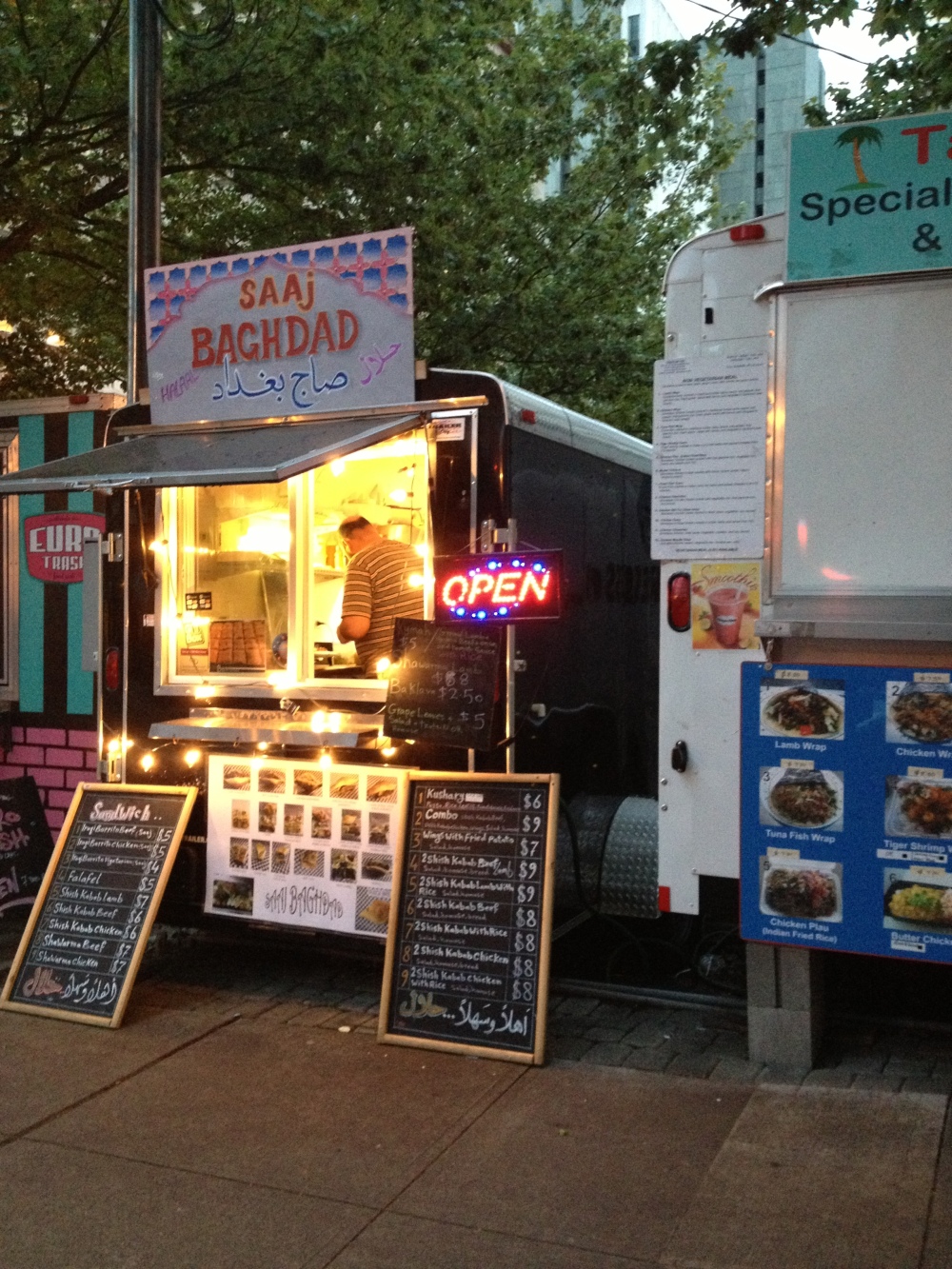 We soon realized that we had made so many random turns in fascination with our surroundings, that we had no idea how to get back to our van. Our van was lost. We walked around forever. I remembered that the van was parked by a crane. As we walked towards it, I never anticipated that there would be several of them surrounding the city. We followed the wrong one. Eventually we located the Patagonia store, which was a landmark located close to our van, and in finding it we were able to find our van. We slept well that night.

A little pick me up in the form of juice from “Greenleaf Juicing Co.”, and coffee at “Black Rooster Café” was in order. It was raining again, but we made the best of it. We checked out the famous “Voodoo Doughnut” which had a line out the door, but moved along quickly. Trevor got the “Vegan Cock-n-Balls”, I grabbed a cinnamon one and another called the “Triple Chocolate Penetration” (a chocolate doughnut with chocolate icing with Cocoa Puffs on top). 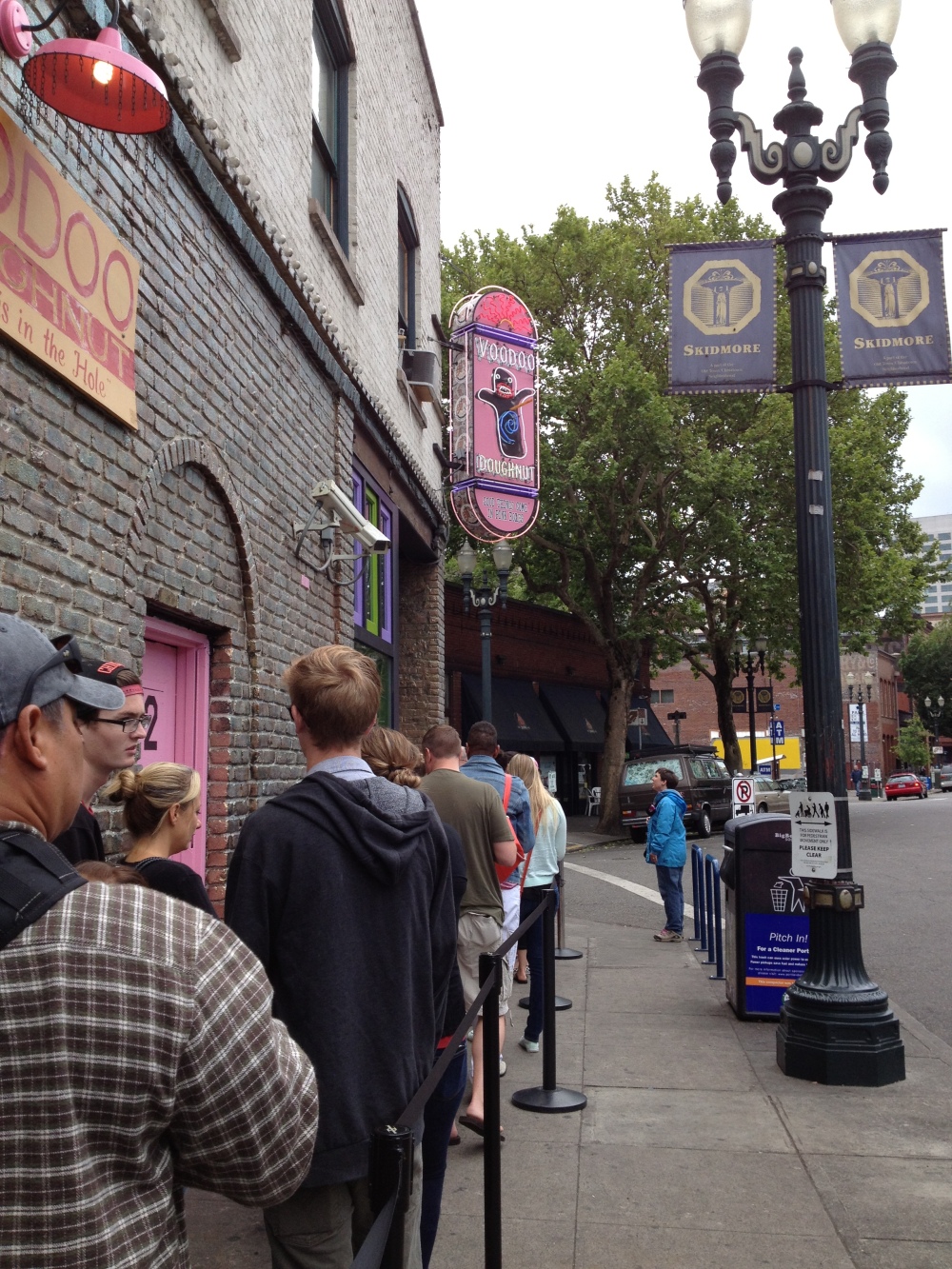 We burned off all those calories by walking around Pioneer Place mall, then headed back near “Voodoo Doughnut” to get coffee at “Stumptown Coffee Roasters.” Then I was in heaven at “Powell’s Books” three level bookstore.

After killing some serious time there (Trevor’s not the literary type so he was dying to get me to leave), we chose “Taste of Fiji (Ren’s Takeaway)” to eat. We both ordered some super delicious Butter Chicken with rice and salad, and the owner of the food truck was super nice and was very curious about our trip.

We returned to our van to grab our raincoats and killed some time at “Buffalo Exchange” and back at “Powell’s Books”. The rain started to die down thankfully as we wandered over to Washington Park to admire the rose garden. It was absolutely beautiful there!

We grabbed coffee at “Laughing Planet Café” before turning it in.

Jump Back to Part 49: The Underground, Grunge & A Troll