9/9/21 - Mission Accomplished! 🤘
Damn Montana! You pretty!
Yet again, Montana brought the hiker friendliness in Augusta, and a sweet sunset too! Once we were able to force ourselves to leave, we were off to “The Bob” and finally got to see the Chinese Wall. We’re officially in the heart of grizzly country, y’all! 🐻
The sweet views continued all the way to Augusta!
Had an awesome birthday which I celebrated with my stinky, freeloading #hikertrash tramily, the wonderful people of Lincoln, and Daryl the Sasquatch. The hike from Rogers Pass was just as amazing as the hike into it after we hunkered down in a yurt to avoid the rain. More climbs, but a lot of ridge walking by rock ledges and towers.
No more smoke, but the days have been windy and the nights have been cold. We visited an amazing outfitter in the middle of the trail, got to see Golden, a familiar face from the AT (2016), and lots and lots of cows! I had been in a bit of a funk lately, but the ridge walk right before reaching Rogers Pass snapped me out of it!
Got stuck in the Butte vortex. We hitched in, hitched out, hiked to the north side then hitched back in. Pizza Ranch was our second home. Eventually we made our way to Helena, our second vortex. Before our arrival, we got pounded by hail and rain. The wind was blasting through the trees so hard, they were snapping like twigs behind us. The people of Helena were beyond hiker friendly. We got stuck a second day when a girl working at the brewery let us crash at her place for free, hot tub included! Life’s good!
The road walk continues. Nevada City to Twin Bridges to Silver Star to Butte! Time for a couple zero days!
Most of us had trouble getting the Big Sky Alternate maps, so we’ve been road walking. These things don’t bother me as much as most people. Road walks can be pretty fun! We’ve been bouncing town to town: West Yellowstone to Big Sky. Big Sky to Jeffers. Jeffers to Ennis. Ennis to Virginia City to Nevada City, and still rolling! Our end goal is to get to Butte, finally do some laundry, get showers (cuz we smell like sweaty buttholes), then return to the CDT to crush those last few hundred miles. It’s been fun making friends with the locals, and it’s also been more scenic than expected!
Posted on March 23, 2018March 31, 2018 by Stubbs

Same as the day before, we started our morning with juice and coffee, then we sadly made our way out of Portland, OR. We really enjoyed ourselves there, but it was time to do some more exploring. We took I-5 to I-84 East in the rain to the Columbia River Scenic Highway to get to Bridal Veil, OR. We stopped to check out Wahkeena and Multnomah Falls, which were both beautiful.

Then we took I-84 West to Hwy 26 to Route 6 West to head for the ocean. Fortunately, the rain finally started to die down. After driving through Tillamook State Forest, we stopped at Smith Homestead, OR for a short lunch break before pushing onward passed stinky cow fields. Eventually we made it to the Pacific Ocean and I was thrilled! We stopped at Cape Lookout State Park to walk on the sand and stick our feet in the ocean. 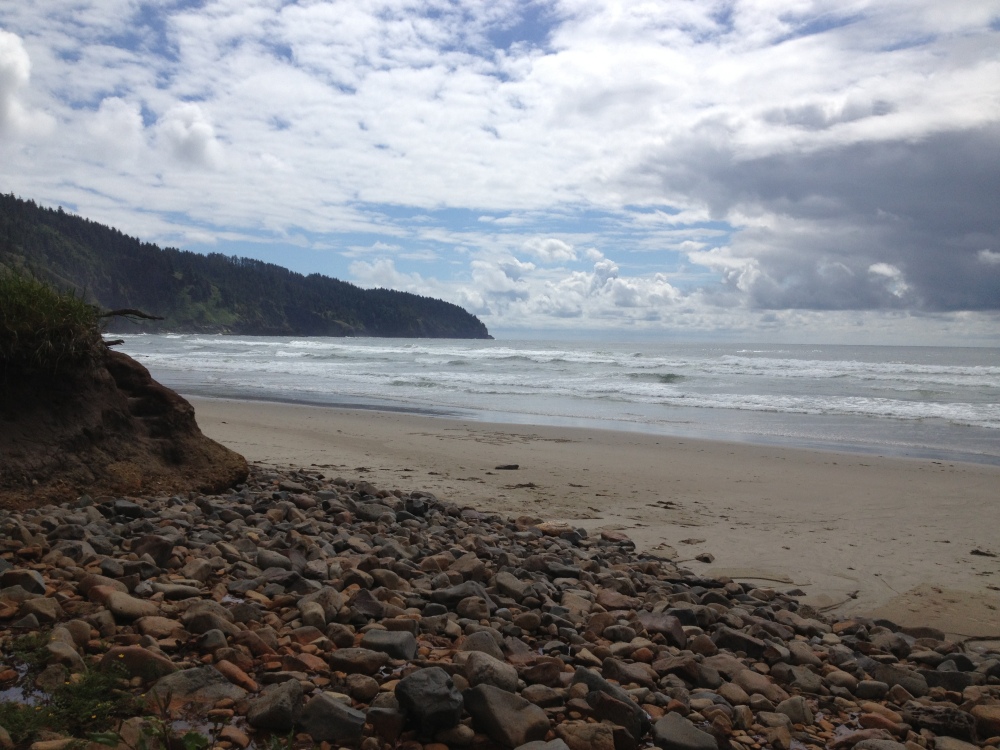 The views were amazing along the coastline and throughout Siuslaw National Forest. We made a few stops along the way: grabbing groceries in Lincoln City, capturing some views off the side of the road, stopping to eat fried clam sandwiches at the “Chowder Bowl” in Depoe Bay, and stopping in Newport since we had forgotten to buy some things at the store back in Lincoln City. It was a super hazy drive, but after continuing to stop every few minutes or so, we realized we were in love with the Oregon coast, with or without sunshine. The scenery had me awestruck and I was quite amused with the seals and sea lions barking and lounging along the coastline. 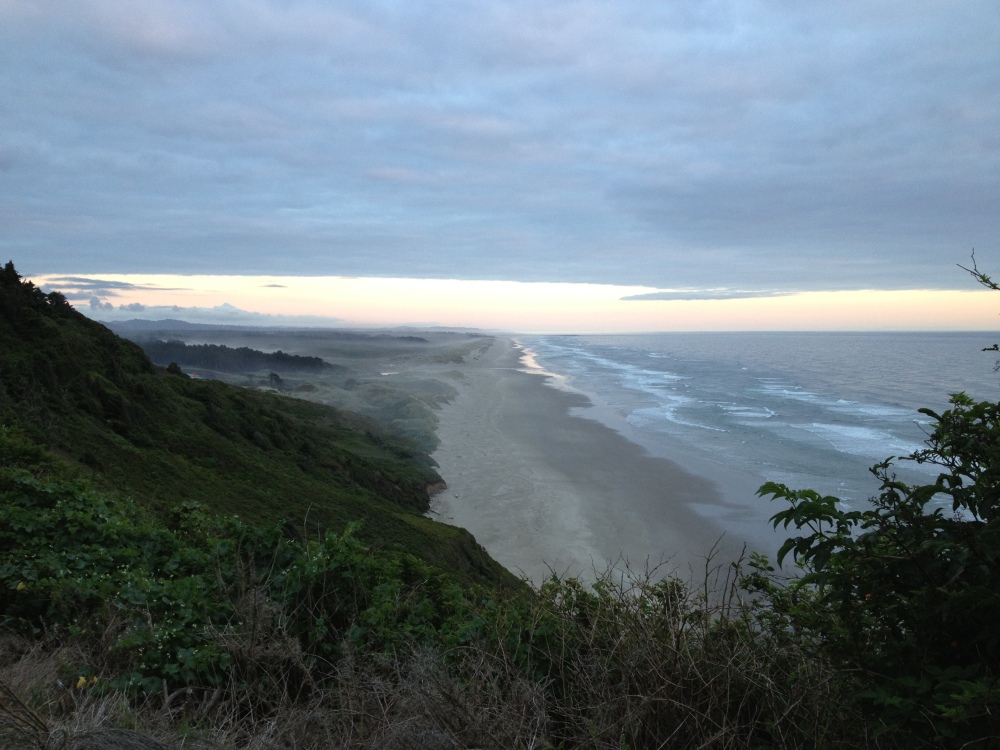 We grabbed gas in Florence, OR and had intentions of camping in the Oregon Sand Dunes National Recreational Area for the night. It was way too dark to see and we couldn’t figure out where camping was allowed, so we decided to leave. This turned out to be a blessing in disguise when we realize we had a serious antifreeze leak on our hands. We returned to Florence and found “Knecht’s Auto Parts” in town. We slept overnight in their parking lot hoping to handle to problem in the morning.

I don’t know if it was the clam sandwich or what, but I felt ill during the night. It took all I had not to throw up all over the parking lot in the middle of the night. As soon as the auto shop opened, Trevor bought the parts he deemed necessary and started wrenching out the van, while I ran across the street to find a bathroom to destroy. Our van was old and rusty, which made the task trickier. After a few runs back and forth between the shop and the parking lot to get the right tools and parts, Trevor eventually fixed the problem. Neither of us are too well versed on auto repair, so I was really proud of him.

We grabbed coffee at the drive thru, “Dutch Bros Coffee” and the girl at the window liked our van, so she hooked us up with a bunch free stickers to put on it. Then we took Route 126 East to Eugene, OR. There was another “Voodoo Doughnut” there, and it was good, but it just wasn’t as awesome as the one in Portland. I think the magical part of the Portland location is that their doughnuts always stay fresh since they are so busy at all hours of the day and night. Trevor got the “Old Dirty Bastard” and I grabbed a “Voodoo Doll” and a “Diablos Rex” to go. I don’t know if we were secretly just missing the coast, or what, but we weren’t content with Eugene. 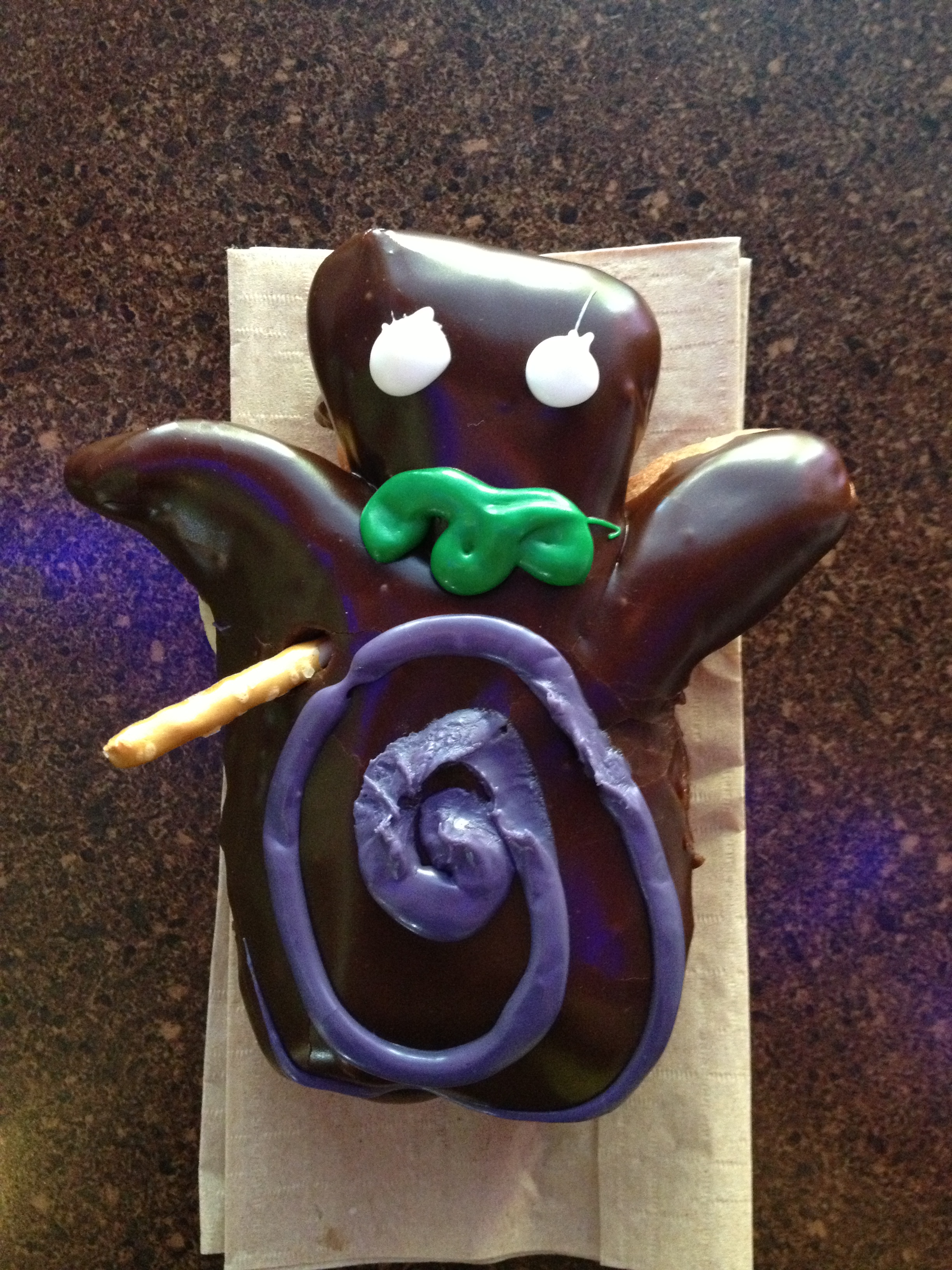 So back to Florence we went! We took US-101 South and stopped at Bandon, OR to check in at the Driftwood Motel. They had a great rate! We started unloading the van and we got a phone call from the front desk kindly asking us to move our van from the walkway. We apparently backed the van in too far, and so we understandably complied. Before Trevor could make his way to the door to move it, we saw the most hysterical attempt at acting when a guy (who we later learned was related to the owners in some way), casually walked by then pretended to get wrapped up in the bikes hooked to the back of our van. After pretending to lose his balance in the “man versus stationary bicycle” scuffle, he looked directly in our motel window, threw up his arms, gave a dirty look, then turned around the headed back in the other direction. Quite the dramatics to make a point that was already made especially before we even had a chance to correct it. We just chose to shake our heads and ignore it though. The rest of the people at the hotel were very kind. He must be awfully bored or something.

After some much needed showers (it had been an eternity since we used something besides baby wipes to bathe!), we walked around town. We grabbed food at “MacFarlin’s Bar and Grill”, and got clam chowder and turkey sandwiches. Their business had a “no cellphone” policy which was a bit unorthodox, but I can’t say I entirely disagree with, and our waitress ended up yelling at a pair of young women who were poking and prodding away at their smart phones as opposed to talking to one another. Our waitress was super nice and funny, but she had a bad habit of spitting when she talked. And she talked a lot. After eating and receiving our second shower, we headed back to our room to relax.

Jump Back to Part 50: Voodoo, Bibliophiles & A Rose Garden

Jump Ahead to Part 52: Demon Seal, Crackheads & The Redwoods