9/9/21 - Mission Accomplished! 🤘
Damn Montana! You pretty!
Yet again, Montana brought the hiker friendliness in Augusta, and a sweet sunset too! Once we were able to force ourselves to leave, we were off to “The Bob” and finally got to see the Chinese Wall. We’re officially in the heart of grizzly country, y’all! 🐻
The sweet views continued all the way to Augusta!
Had an awesome birthday which I celebrated with my stinky, freeloading #hikertrash tramily, the wonderful people of Lincoln, and Daryl the Sasquatch. The hike from Rogers Pass was just as amazing as the hike into it after we hunkered down in a yurt to avoid the rain. More climbs, but a lot of ridge walking by rock ledges and towers.
No more smoke, but the days have been windy and the nights have been cold. We visited an amazing outfitter in the middle of the trail, got to see Golden, a familiar face from the AT (2016), and lots and lots of cows! I had been in a bit of a funk lately, but the ridge walk right before reaching Rogers Pass snapped me out of it!
Got stuck in the Butte vortex. We hitched in, hitched out, hiked to the north side then hitched back in. Pizza Ranch was our second home. Eventually we made our way to Helena, our second vortex. Before our arrival, we got pounded by hail and rain. The wind was blasting through the trees so hard, they were snapping like twigs behind us. The people of Helena were beyond hiker friendly. We got stuck a second day when a girl working at the brewery let us crash at her place for free, hot tub included! Life’s good!
The road walk continues. Nevada City to Twin Bridges to Silver Star to Butte! Time for a couple zero days!
Most of us had trouble getting the Big Sky Alternate maps, so we’ve been road walking. These things don’t bother me as much as most people. Road walks can be pretty fun! We’ve been bouncing town to town: West Yellowstone to Big Sky. Big Sky to Jeffers. Jeffers to Ennis. Ennis to Virginia City to Nevada City, and still rolling! Our end goal is to get to Butte, finally do some laundry, get showers (cuz we smell like sweaty buttholes), then return to the CDT to crush those last few hundred miles. It’s been fun making friends with the locals, and it’s also been more scenic than expected!
Posted on March 30, 2018April 2, 2018 by Stubbs

We took Route 20 East out of Yuba City, CA only taking a brief stop in Nevada City before driving through Tahoe National Forest into Truckee. We ended up loving Truckee and had fun strolling along its historic downtown area and exploring all the small shops.

We would return later, but left to take Route 267 towards Lake Tahoe. The lake was an incredible shade of blue and the scenery was absolutely stunning!

We checked out the shops in Tahoe City, CA before meeting up with Trevor’s friend from high school, Dan, who lived there. We didn’t want to intrude since he had to leave early the next morning to go to Vegas, so we returned to Truckee which was lit up with Christmas lights. There was an “overnight parking” lot in town where the train passed through, which is where we crashed for the evening.

I was awoken bright and early by Spanish chatter outside the van. This lot seemed to be the same spot immigrant workers would wait to be picked up to head to their jobs. We would head over to “Coffeebar” which would become one of our new favorite coffee shops during the whole trip. Not only was the coffee great, the atmosphere was super chill and there was a lot of cool artwork on display around the shop created by local artists.

We did a little more strolling around town before venturing out to Squaw Valley, CA to explore the shops there, to try our first attempt at slacklining (which I’m horrible at, by the way), and to check out a really good hike Dan had recommended. We weren’t certain where the trailhead was, but we were given good directions by the lady who worked at the “Everything Hunky Dory” store. She also recommended we check out the “Pringle” shaped church which was one of the original building in the area from the 1960 Winter Olympics. 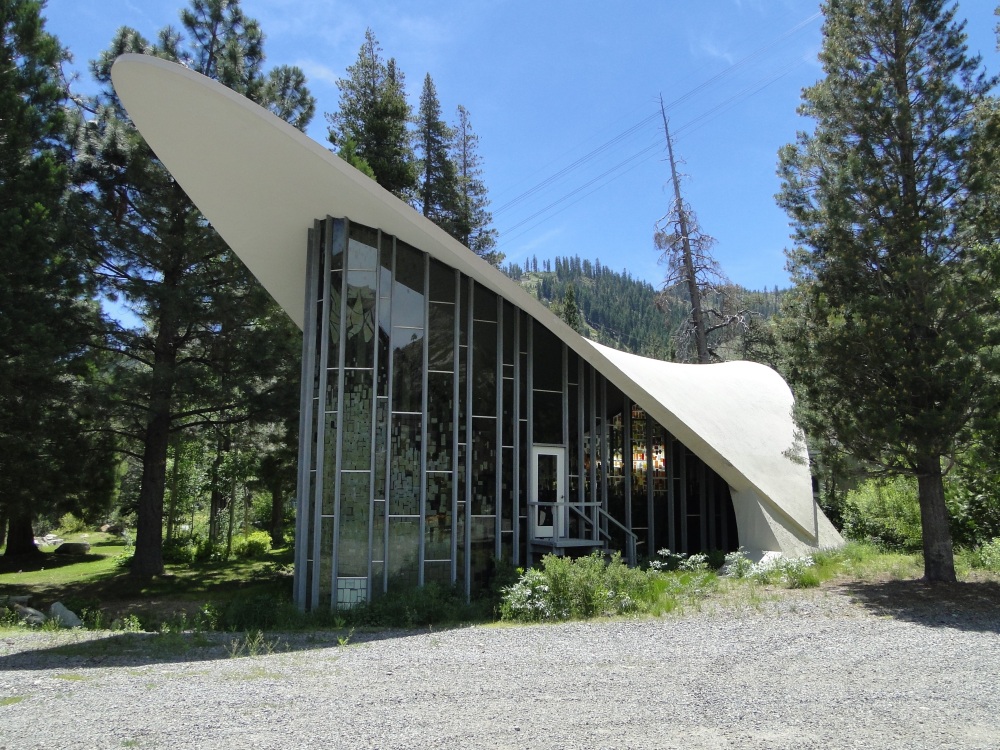 After checking out the church, we started our hike up Shirley Canyon, a three-mile one-way hike with 2,800 feet of elevation gain. It was a super awesome and challenging hike and there was a free gondola ride back down the mountain.

The ride down was interesting with the dogs, the guy farting in the corner, and the senile grandma who kept talking about the shapes of the clouds. After finding the Western States plaque, another suggestion we were given, we went back to “Everything Hunky Dory” to thank her for her recommendations. She informed us of one more important tidbit. She told us to make sure to make it to Yosemite before the 4th of July because that’s when the “flood gates open.” We took her word for it! The fewer the tourists, the better!

We wandered the shops some more before eating sandwiches in the van and heading to Tahoe City to explore some more. Once again, we found ourselves back in Truckee to eat dinner, followed by more coffee at “Coffeebar”.

There was a soccer game on the TV and one of the employees who was from Panama was getting all worked up over it, yelling in Spanish. Another employee behind the bar teased her yelling, “Kiki! We swear in English here!” We wandered out to the patio area where we got some light entertainment watching a little mouse running around outside eating the crumbs that customers dropped. Later we went back inside and watched the Heat beat the Spurs in overtime before returning to the van for the night.

Jump Back to Part 52: Demon Seal, Crackheads & The Redwoods