9/9/21 - Mission Accomplished! 🤘
Damn Montana! You pretty!
Yet again, Montana brought the hiker friendliness in Augusta, and a sweet sunset too! Once we were able to force ourselves to leave, we were off to “The Bob” and finally got to see the Chinese Wall. We’re officially in the heart of grizzly country, y’all! 🐻
The sweet views continued all the way to Augusta!
Had an awesome birthday which I celebrated with my stinky, freeloading #hikertrash tramily, the wonderful people of Lincoln, and Daryl the Sasquatch. The hike from Rogers Pass was just as amazing as the hike into it after we hunkered down in a yurt to avoid the rain. More climbs, but a lot of ridge walking by rock ledges and towers.
No more smoke, but the days have been windy and the nights have been cold. We visited an amazing outfitter in the middle of the trail, got to see Golden, a familiar face from the AT (2016), and lots and lots of cows! I had been in a bit of a funk lately, but the ridge walk right before reaching Rogers Pass snapped me out of it!
Got stuck in the Butte vortex. We hitched in, hitched out, hiked to the north side then hitched back in. Pizza Ranch was our second home. Eventually we made our way to Helena, our second vortex. Before our arrival, we got pounded by hail and rain. The wind was blasting through the trees so hard, they were snapping like twigs behind us. The people of Helena were beyond hiker friendly. We got stuck a second day when a girl working at the brewery let us crash at her place for free, hot tub included! Life’s good!
The road walk continues. Nevada City to Twin Bridges to Silver Star to Butte! Time for a couple zero days!
Most of us had trouble getting the Big Sky Alternate maps, so we’ve been road walking. These things don’t bother me as much as most people. Road walks can be pretty fun! We’ve been bouncing town to town: West Yellowstone to Big Sky. Big Sky to Jeffers. Jeffers to Ennis. Ennis to Virginia City to Nevada City, and still rolling! Our end goal is to get to Butte, finally do some laundry, get showers (cuz we smell like sweaty buttholes), then return to the CDT to crush those last few hundred miles. It’s been fun making friends with the locals, and it’s also been more scenic than expected!
Posted on April 13, 2018April 16, 2018 by Stubbs

I was under attack by ants as I sat down on a rock to brush my teeth. We headed back to Bishop, CA and got coffee at “Black Sheep Coffee Roasters” before heading to the laundromat to clean some clothes. We were hoping to utilize their showers too, but they weren’t available until 5 that evening. We ate at “Schat’s Bakery” (insert childish giggles here), a recommendation from the lady we met at Squaw Valley, and I got some cinnamon raisin bread to go. I took “a sink” at Starbucks, always a great place to go since they almost always have single stall bathrooms. Then we went to the car wash to rinse off the van… and our hair.

We headed out of Bishop through the Mojave Desert, and it was stupid hot! It was 101˚F in the shade, which didn’t bother me too much given it’s a dry heat, but the van was not happy. We kept our fingers crossed that the van would survive California, let alone the entire trip across the country! We saw Joshua Trees for the first time as we passed through little shanty towns, like Johannesburg, CA, where we took a short stop to get some cold water. I’m usually content with room-temperature water for drinking, but our water was currently hot tub temperature. Not too refreshing when you’re already in a heat wave.

From there we took Route 58 East to I-15 South to stop at Barstow, CA to phone home while we had service, then took I-15 North to Route 247 South to get to Yucca Valley, CA. We parked at Walmart and grabbed milkshakes at the Sonic across the street to cool off. Trevor was sad after he dropped most of his trail mix on the ground which he was in the process of mixing. He tossed it by a rock that was topped with an animal turd in hopes that the birds would enjoy it later. The van was swampy that night.

The crows woke us up as they swarmed around the trail mix. We got some bananas at the store before heading to Joshua Tree, CA. 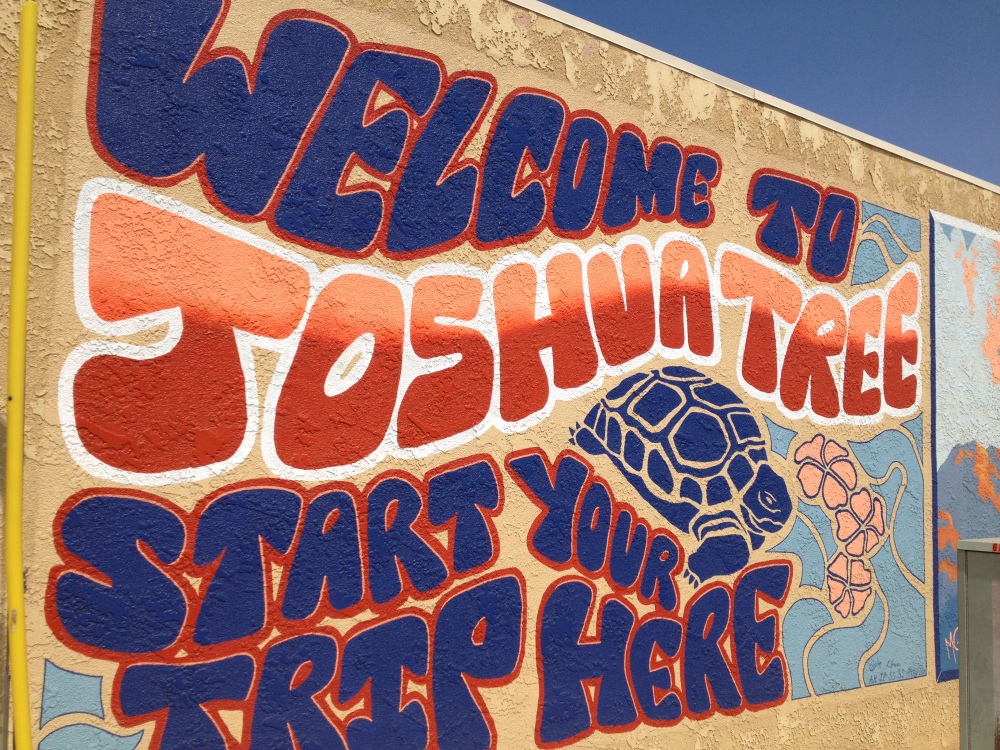 We paid the Joshua Tree National Park Visitor Center a visit before checking out the little desert town by the same name. The people there were super friendly and we really enjoyed all the quirky little shops. We grabbed some refreshing veggie juice at “The Natural Sister Café,” and filled our water bottles at the park entrance before exploring Joshua Tree National Park.

It was a very hot day at 116˚F and there’s no questioning how the park got its name given that the Joshua Tree is nearly the only plant you see in the vast desert landscape.

We checked out Skull Rock, the black cactus garden, and saw some other unusual vegetation as we left the park.

We were dying from the heat and decided to give the van a break while we ate nearby Coachella, CA. We filled up the tank, enjoyed more hot drinking water, and took I-10 to Route 86 South to Route 11 South towards the Salton Sea. We decided to get ice to cool down our water which was reaching its boiling point, and passed by many palm trees and grape farms before arriving at the Salton Sea State Recreation Area.

We were under the impression it would be a nice place to swim…wrong. This is an example of why it’s good to briefly research where you’re traveling too instead of making assumptions. Dummy me.

We paid $5 to enter the parking area. Then we were overpowered by the smell of sulfur and attacked by biting flies as we approached the empty beach. The beach seemed to be made out of tiny seashells, but as I looked closer, those were not seashells I was walking on, but tiny, little bones.

As I got closer to the water, I noticed many dead fish around me and the water was murky. There would be no swimming.

After looking at the birds and reading some plaques posted around the recreation area, we rolled out.

The road paralleled with railroad tracks, and we followed alongside trains, farmland with dairy cows in the masses, and impoverished neighborhoods.

We drove by wind farms as we took Route 8 West to Desert View Tower in Jacumba, CA, where we also saw a rock painted like a turtle and space ships.

Then we passed through Cleveland National Forest before being stopped at a Border Control Checkpoint. Apparently we were very, very close to the Mexican border, so much so that my cellphone kept welcoming us to Mexico. Border Control seemed a little upset when their drug dogs didn’t respond to our hippy van, but we got to see some other vehicles get vigorously searched as they let us pass through.

We found a Walmart to stop at in Alpine, CA. People in the parking lot kept waking me up throughout the night. One man walked around our van with a woman commenting on all of the stickers on the van not realizing that we were sleeping inside. Other people walked closely to our van as well, and I suspect they were doing the same. The shopping cart attendants would also snap me out of sleep shuttling stray carts back to the store. Sleep is just one of the things I gotta sacrifice in order to live life on the road.