The Cirque of the Towers Route left me speechless. 😶 All the views. ⛰ All the #rainbows . 🌈 All the #lakes . 🏊🏼 The Winds have stolen my heart. 😍
Had a good time in #lander then a horrible time back on trail climbing over the worst blowdown section I’ve ever crossed through. 😖 Our group got separated in the mix. The days that followed would make up for the headache. The Cirque of the Towers Route was amaze balls! 😍
The Basin. Pretty much just vast nothingness, a few pronghorn, and lots of cows. It was mostly dry and hot, although we did experience some thunderstorms. Also, my oxen broke a leg 🐂 and I have died of dysentery on the Oregon Trail.🤠 These things happen. 🤷🏻‍♀️
We hitched back from Encampment and accidentally camped on private property. 😬 Fortunately, the guy wasn’t mad when he found out we were CDT hikers and let us stay. Our views were hazy due to the wildfire smoke. 🔥 We passed through the affected area two days prior! A road walk to Rawlins followed, and we found ourselves herding cattle and dodging cow diarrhea. 🐂 💩 I was relieved to lay in a bed after inhaling some town food. I’ve been battling some nasty sciatic pain and blisters. Hiking through the basin wasn’t going to be too helpful.
One more state complete! Colorado was a blast and it was great to spend the last few days there with fellow AT hikers. Thanks again for the trail magic and the hospitality, @robinurthoughts and @urmygirl_blue You guys rock! Our #tramily has grown from 4 to 8 and we’re ready to take over Wyoming! Hammer down! 🤘
We destroyed some food when we reached Grand Lake. The damage from last year’s wildfires caused us to miss out on the bulk of the Rocky Mountain National Park section, which sucked. We also had to maneuver through many blowdowns, but the views during the climb up and down Parkview Lookout were amazing! The next day, we tackled a 37.4 mile day and made it to Steamboat Springs for the holiday weekend! 💥🇺🇸 🍔 Next stop, the Colorado-Wyoming border! 🤘
Sooo… we had to hike out of Winter Park otherwise we were gonna have to apply for employment. It was time! We weren’t too keen on hiking on top of mountains during a lightning storm, nor were we thrilled about the “impassible” blowdown section ahead. So instead, we connected the road from Berthoud Pass to the Fraser River Trail to the Fraser-Granby Trail. There was a lot of cool art, signage and wildlife along the way.
The climb to #grayspeak #summit was brutal, especially while having some of the worst altitude sickness in my life. 😵‍💫 But I fought off the nausea, gave my legs a pep talk and conquered my second 14er. The views were motivating, and the knifes edge before the final climb was awesome aside from the wind blowing me around like a plastic bag. The icing on the cake was seeing mountain goats during the hike down! ❤️
I was stoked to finally leave the very groomed Colorado Trail section so I could experience some new terrain. We had some big climbs, but we were rewarded with great views!
Posted on April 30, 2018May 2, 2018 by Stubbs

It was a restless night since Oakland is noisy, but we found an awesome coffee shop called “Urban Blend” right down the street which we would frequent. Even though the room wasn’t available yet, we got checked in at the hotel, then took the BART (Bay Area Rapid Transit) to San Francisco, CA.

Once we got there, we walked down Market Street to Embarcadero and tried to check out Alcatraz, but all tours were booked up through August 1st! Just another thing to add to the list of things we need to do next visit to California! I’m bummed out, but get over it quickly.

San Fran is a super walkable city with plenty to offer. We walked to Fisherman’s Wharf and were at least able to get a view of Alcatraz as well as the glorious Golden Gate Bridge from a distance. 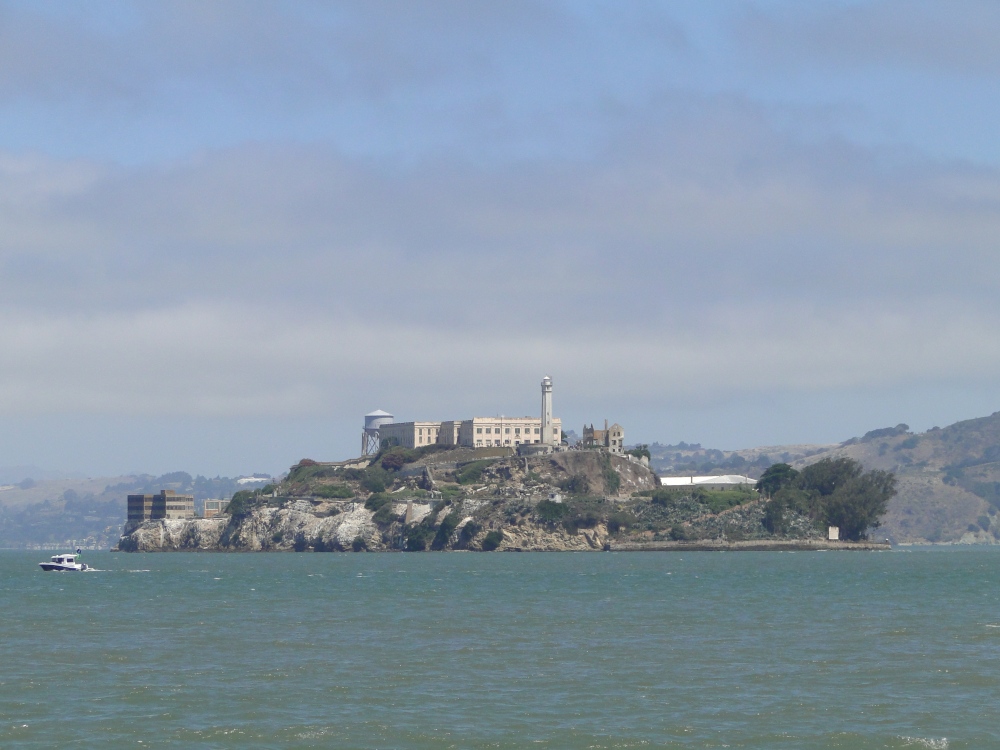 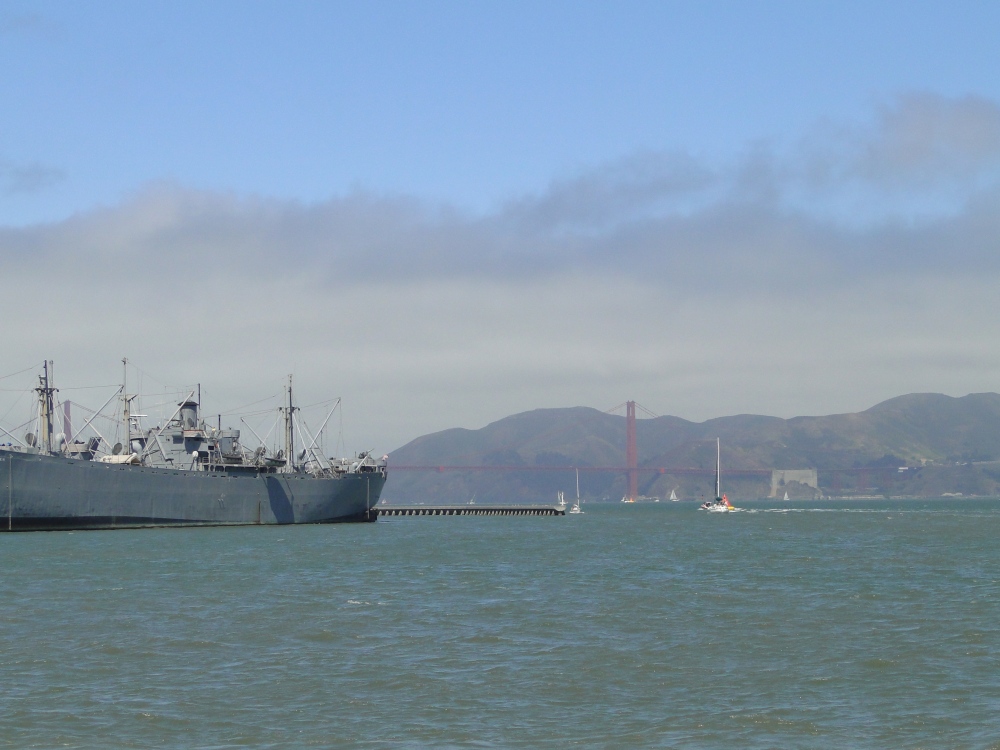 We decided to splurge on an expensive meal for a change at “Alioto’s Waterside Café” which has been around since 1925. We got crab-artichoke dip, clam chowder, and salmon with rice and vegetables, before heading towards the Cannery and Ghirardelli Square.

I thought I was imagining things when I saw 3-4 green parrots flying overhead. It turns out the “Parrots of Telegraph Hill” are real. The story goes that two parrots escaped from a household in 1990 and the population has grown to over 200 parrots (as of 2005).

We walked around popular San Fran landmarks such as “Zig-Zag” Street, followed by Chinatown. 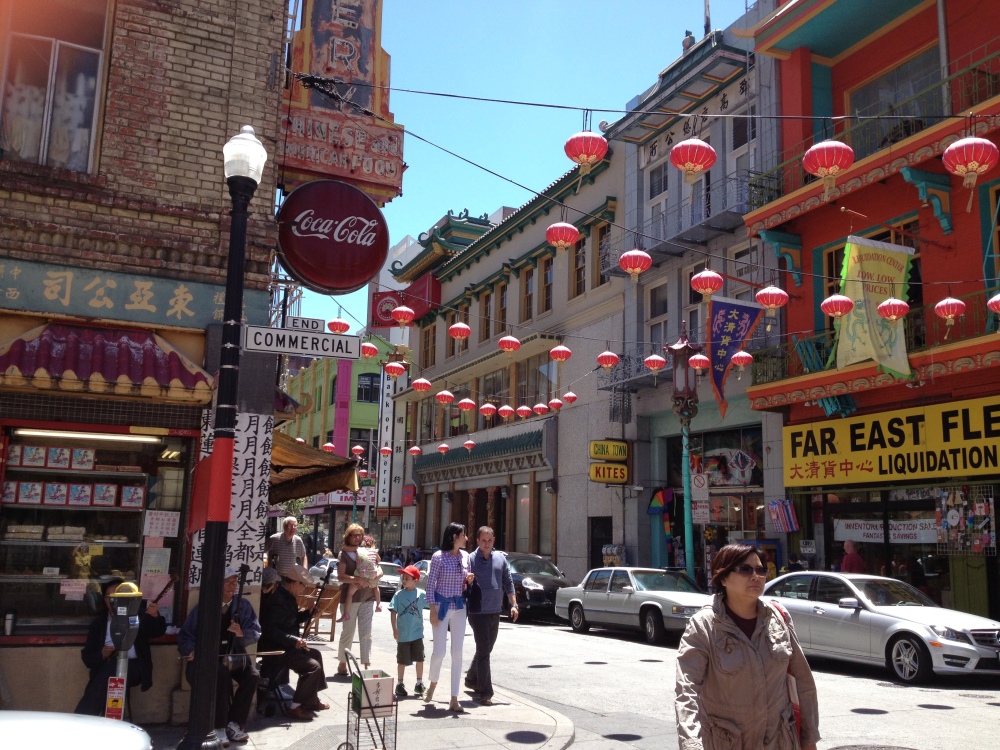 There we listened to street performers, checked out all the small shops, and got a butterfly shortbread cookie from the oldest Chinatown bakery, “Eastern Bakery,” which has been around since 1924. 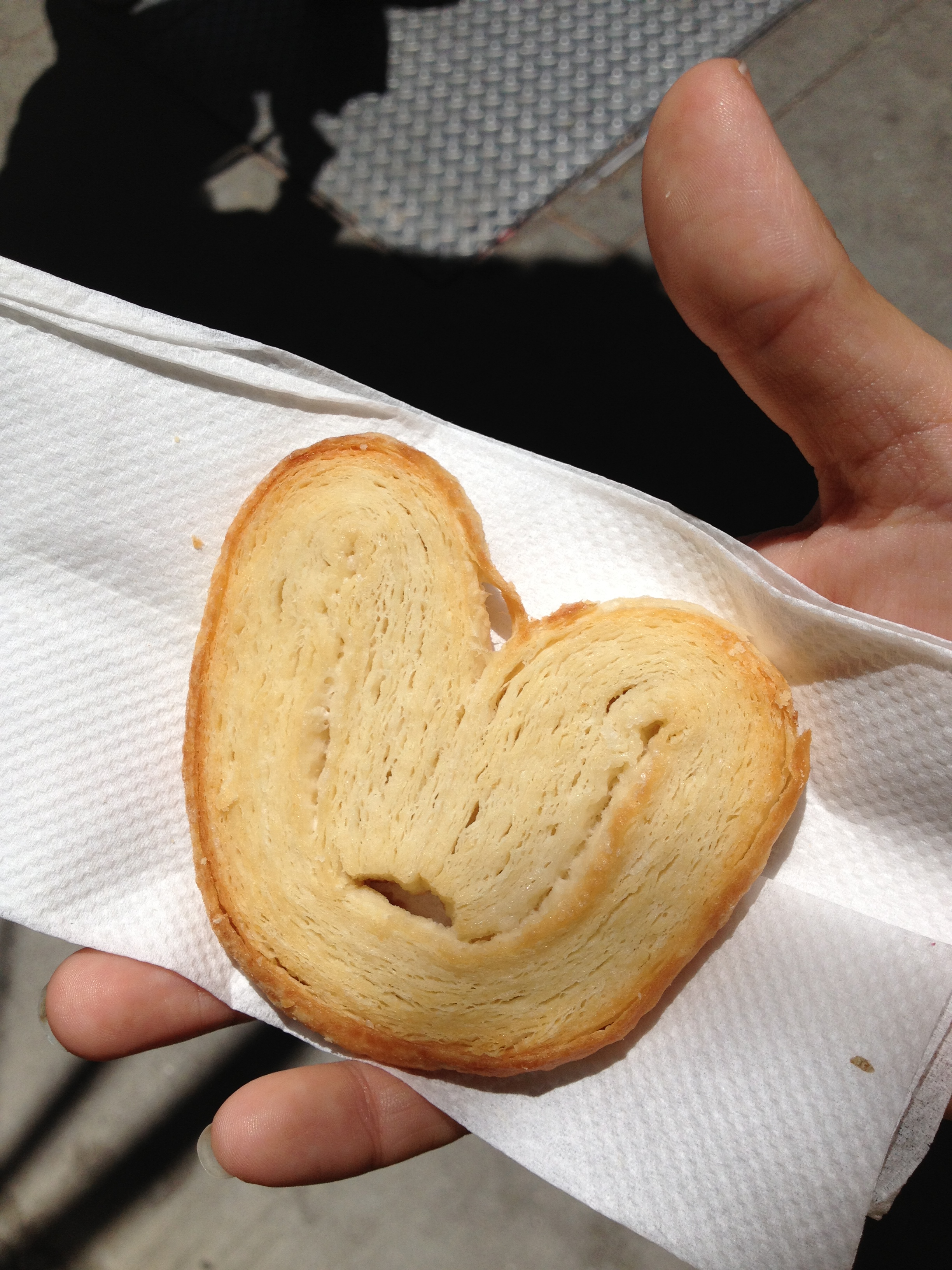 We headed back to Market Street which had a Farmer’s Market going on out front of City Hall. 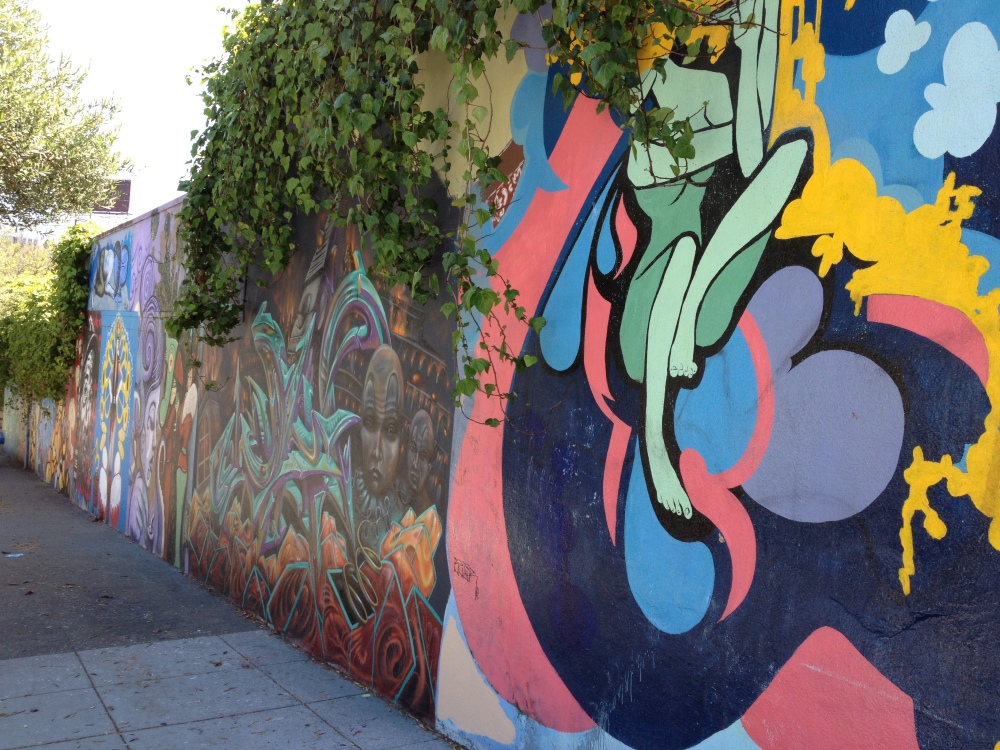 After that, we located Haight Street and followed it, enjoying all the street art along the way, to where it intersects with Ashbury Street, where we browsed through all the hippy shops. 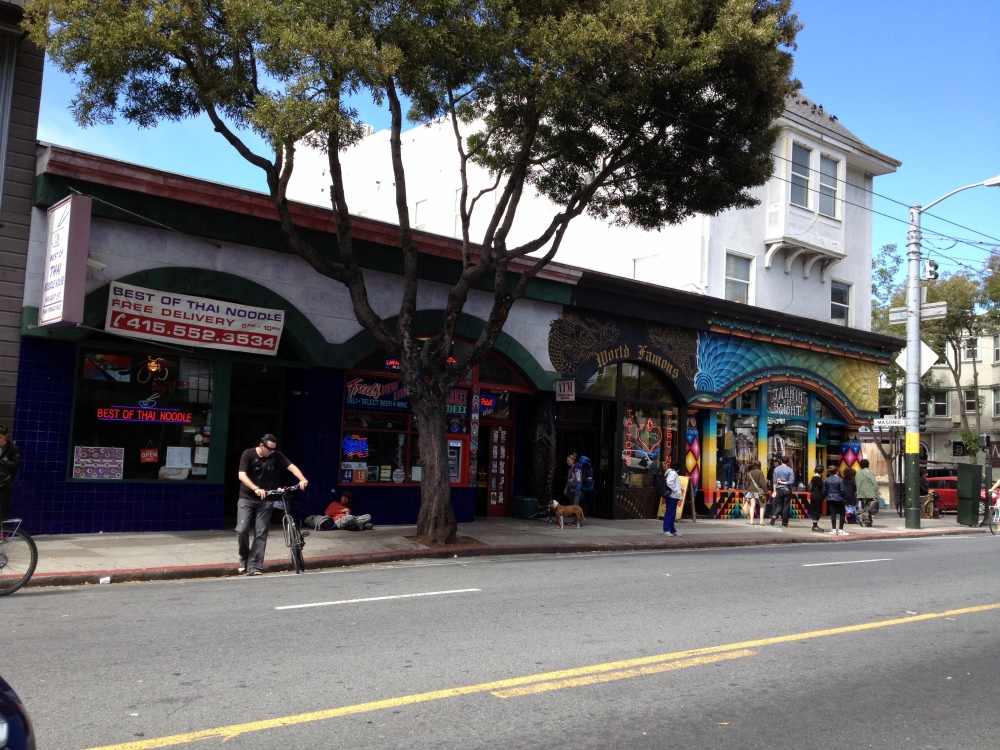 We grabbed coffee before heading back to Market Street and taking the BART back to Oakland where we checked into our hotel room. We unloaded our stuff from the van into our room, showered, walked passed the gutter punks begging for money at the intersection on the way to “Urban Blend” for coffee and WiFi, then wandered around Oakland a bit more before settling in.