Hung out with the creatures of the night just before touching Waterton, then tripped out over the #pacificnorthwesttrail all the way to Chief Mountain. That about sums up the end of the #cdt2021 Now it’s time to finally knab that 👑 👑 👑 on the #pct2022 Hammer down!
Round 2 of wild and epic #glaciernationalpark It started to get smoky near the end, but this place was still stunning. 🤩
It’s that time of year! Hiking season is about to begin, and I just realized I never posted any pictures of #glaciernationalpark from last year’s trek. Here’s round one of one of my favorite places. Glacier got #grizzlybear, bighorns, swamp donkeys, and views for days! 😍
After spending a little too long out in the so-called “real world”, it was so damn refreshing to meet up with some of my tribe for a multi-day hike on my home trail. To those CDT tram members who couldn’t make it out, you were truly missed and gossiped about… A LOT! 😂 But I’m hoping some of you cross paths with us on the PCT later this year. Good luck Tapeworm on making it over halfway on the AT. 🔥 Enjoy the north. RIP The Doyle. You will do well I’m certain, but I’ll miss the glorious shitshow you once were. How the trail has changed! 🤯
I did a thing today. Probably won’t do it again. But I also said I wouldn’t run 13.1 miles ever again, sooo… 🤷🏻‍♀️Thanks @trevtrevorwhatever for the support, and super rad to catch up with you @wildturkeytrotsthru Thanks for the hospitality!
9/9/21 - Mission Accomplished! 🤘
Montana! You pretty!
Yet again, Montana brought the hiker friendliness in Augusta, and a sweet sunset too! Once we were able to force ourselves to leave, we were off to “The Bob” and finally got to see the Chinese Wall. We’re officially in the heart of grizzly country, y’all! 🐻
The sweet views continued all the way to Augusta!
Posted on June 1, 2018June 4, 2018 by Stubbs

I recently decided to utilize my free time participating in activities that are a bit more rousing than binging on Netflix and social media. So I set some goals for myself to accomplish by the end of the year, one of them being to tackle more of the highest peaks in each state in the US. Some of them I’ve conquered while hiking the Appalachian Trail, but there are a few local ones that I haven’t set foot on, one of them being the one in my home state of Maryland.

We headed out before the sun rose to drive four hours west to climb Maryland’s highest peak, Hoye-Crest on Backbone Mountain. After making our way through Oakland, we passed by a sign advertising the “Smallest Church in 48 States.” Since I’m a fan of corny road side enjoyment, I insisted we take a quick look.

After a few eye rolls from my husband at my giddy amusement, we continued up the mountain to the trailhead, which was a simple pull-off marked with a “MD High Point” sign pointing towards the woods. As we crossed the road and cut through some brush, we found the trail which was an old forest road. We probably could have driven along it to the small parking lot nearby, but we probably would have gotten stuck in the mud.

Plus there were some battered, white hooker boots laying in the lot, so parking along the road was probably a wiser decision anyway. No offense to hookers if any ladies or gentlemen of the night are reading this. That’s just personally not my idea of a “good time,” kinda how random tiny churches aren’t my husband’s idea of a worthy pit stop. But it’s my duty as a wife to drag him into doing dumb things he finds aggravating. That’s like one of the unwritten rules of marriage or something. Don’t feel too sorry for him. He deliberately married me, so it’s kinda his fault.

I digress. The hike was short, but satisfyingly steep. I haven’t been out hiking much lately, so I was really enjoying myself.

We soon reached the highest point in Maryland, and although we’ve seen much more impressive views, we took the time to pause, relax and utilize the benches drug up to the summit by the Highpointers Club.

Once we returned to the car, we cruised back through Oakland to take an early lunch break by the lake in Deep Creek. Then we “accidentally” stumbled upon the town of Accident, MD, where we grabbed some coffee and glazed donuts at “The Rolling Pin”. 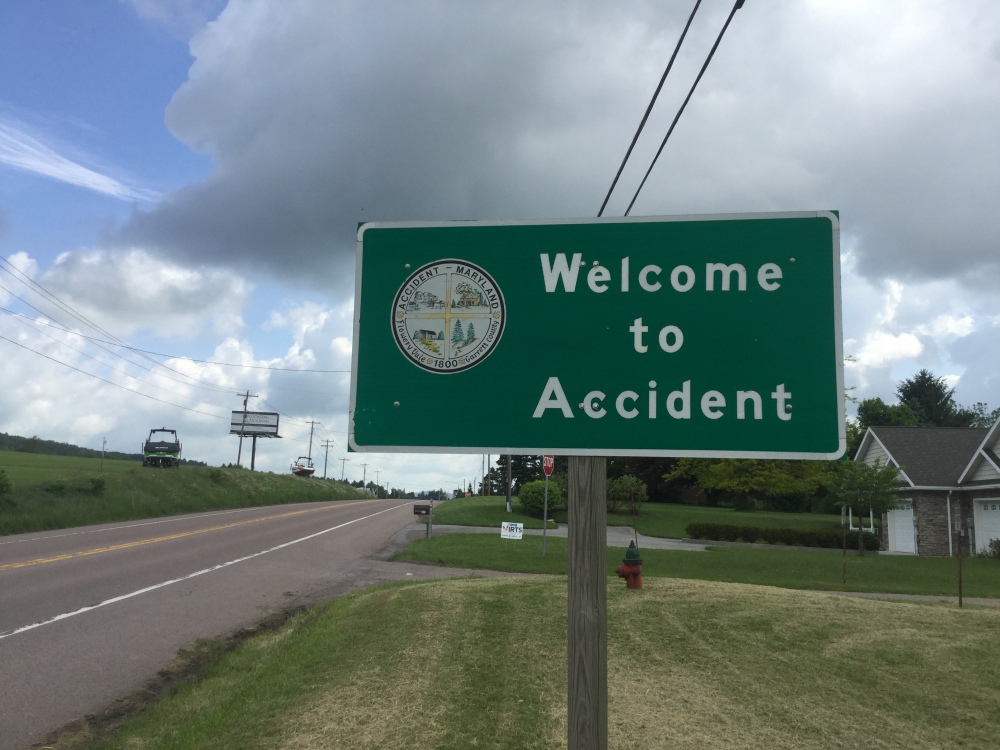 Although I realized upon returning home that we could have easily bagged Pennsylvania’s high point during our drive home (it was on the way), I was still feeling pretty accomplished for adding my eighth high point to the list.