The Cirque of the Towers Route left me speechless. 😶 All the views. ⛰ All the #rainbows . 🌈 All the #lakes . 🏊🏼 The Winds have stolen my heart. 😍
Had a good time in #lander then a horrible time back on trail climbing over the worst blowdown section I’ve ever crossed through. 😖 Our group got separated in the mix. The days that followed would make up for the headache. The Cirque of the Towers Route was amaze balls! 😍
The Basin. Pretty much just vast nothingness, a few pronghorn, and lots of cows. It was mostly dry and hot, although we did experience some thunderstorms. Also, my oxen broke a leg 🐂 and I have died of dysentery on the Oregon Trail.🤠 These things happen. 🤷🏻‍♀️
We hitched back from Encampment and accidentally camped on private property. 😬 Fortunately, the guy wasn’t mad when he found out we were CDT hikers and let us stay. Our views were hazy due to the wildfire smoke. 🔥 We passed through the affected area two days prior! A road walk to Rawlins followed, and we found ourselves herding cattle and dodging cow diarrhea. 🐂 💩 I was relieved to lay in a bed after inhaling some town food. I’ve been battling some nasty sciatic pain and blisters. Hiking through the basin wasn’t going to be too helpful.
One more state complete! Colorado was a blast and it was great to spend the last few days there with fellow AT hikers. Thanks again for the trail magic and the hospitality, @robinurthoughts and @urmygirl_blue You guys rock! Our #tramily has grown from 4 to 8 and we’re ready to take over Wyoming! Hammer down! 🤘
We destroyed some food when we reached Grand Lake. The damage from last year’s wildfires caused us to miss out on the bulk of the Rocky Mountain National Park section, which sucked. We also had to maneuver through many blowdowns, but the views during the climb up and down Parkview Lookout were amazing! The next day, we tackled a 37.4 mile day and made it to Steamboat Springs for the holiday weekend! 💥🇺🇸 🍔 Next stop, the Colorado-Wyoming border! 🤘
Sooo… we had to hike out of Winter Park otherwise we were gonna have to apply for employment. It was time! We weren’t too keen on hiking on top of mountains during a lightning storm, nor were we thrilled about the “impassible” blowdown section ahead. So instead, we connected the road from Berthoud Pass to the Fraser River Trail to the Fraser-Granby Trail. There was a lot of cool art, signage and wildlife along the way.
The climb to #grayspeak #summit was brutal, especially while having some of the worst altitude sickness in my life. 😵‍💫 But I fought off the nausea, gave my legs a pep talk and conquered my second 14er. The views were motivating, and the knifes edge before the final climb was awesome aside from the wind blowing me around like a plastic bag. The icing on the cake was seeing mountain goats during the hike down! ❤️
I was stoked to finally leave the very groomed Colorado Trail section so I could experience some new terrain. We had some big climbs, but we were rewarded with great views!
Posted on August 15, 2018August 17, 2018 by Stubbs

We were Watebury, VT bound as we took I-89 south to US-2 east. We wanted to check out a recommended brewery and restaurant called, “Prohibition Pig.” As we waited for it to open, we stopped at the “Green Mountain Coffee Visitor Center & Café” to grab coffee to wake us up on such a chilly morning. We wondered why on earth the coffee shop staff had the AC cranked up when it was so cold out.

As we charged our phones, we talked to a local named Tom who had retired from “Green Mountain Coffee” before ownership was replaced by Keurig. He was planning on a cross-country trip to Alaska. We share some suggestions on places worth stopping at along the way since we had recently made a similar trip across America. He shared stories about his wife who had recently passed away, and his antiquing hobby. We wished each other safe travels, then walked passed the rehabbed insane asylum and the tiny shops downtown. Trevor scored a $2 Patagonia jacket at a thrift store across the street from “Prohibition Pig.”

Once they opened, we got two ‘Reverse Whirlpool’ IPAs and split guacamole with chips. Trevor ordered the Cuban sandwich, and I went for the Carnitas tacos. The beer wasn’t bad, but the food was definitely better than their brews! We chatted with Chris the bartender, who was also well traveled. He and his wife decided to settle in Vermont since they had a baby on the way.

We watched the grocery/liquor store across the street as people wiped out ‘Heady-Topper’ by “The Alchemist Brewery,” which used to be located in Waterbury. ‘Heady-Topper’ is listed as one of the best beers made according to “The Beer Advocate,” and we would shamefully not jump at the opportunity to grab some while we could. They would later run out of stock everywhere we went in Northern Vermont, the only place you can find it. It was time to keep it moving, so we took I-89 south to US-2 to check out Vermont’s state capital, Montpelier, VT. 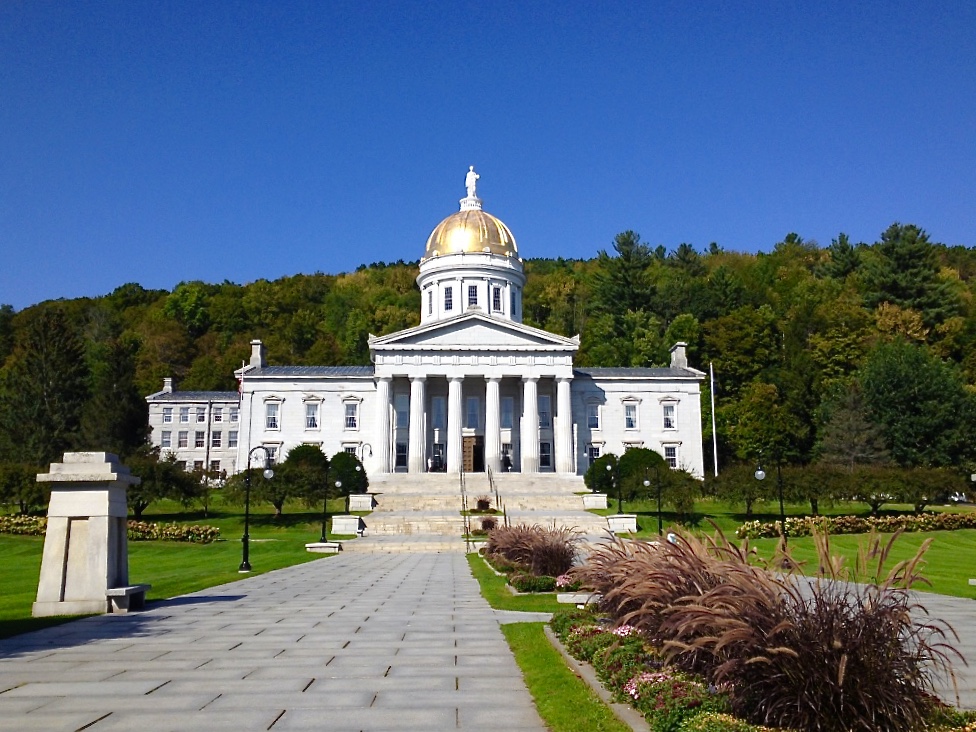 Montpelier was a pretty cool town. I nearly mistook the two dreadlocked dogs lying on the floor at “The Quirky Pet” store as rugs, and we laughed at the witty naming of, “Bagitos” for a bagel and burrito café. 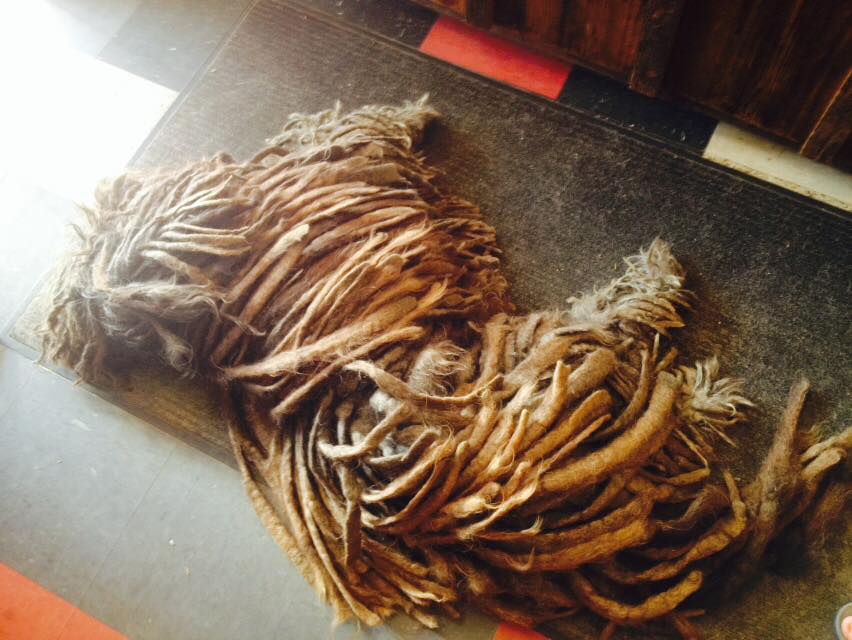 After some browsing, we visited the “Three Penny Taproom” for some beer. Trevor got the ‘What is Enlightenment?’ brew from “Hill Farmstead” and I went for a ‘Susan American Pale Ale’ by the same brewery.

We had some laughs with the bartender after a guy at the bar ordered a pizza, and then asked for silverware before stepping outside for a phone call. Who orders silverware for a pizza? Trevor suggested a spoon and the bartender stepped it up by laying out a standard knife, fork and spoon, as well as a steak knife, soup spoon, and desert fork for the guy. Another guy walked in with a huge basket full of mushrooms and the bartender mistook it for a baby.

After enjoying the humor and brews, we took a stroll through some more shops, then we took the car to the “Green Mountain Cemetery” which was a pretty and peaceful place.

After Trevor grabbed some shoes on sale at “Onion River Sports” and we checked out “Buch Spieler Records & The Getup Vintage,” back in town, we took US-2 east to St. Johnsbury, VT.

There wasn’t much in town, but we asked for directions and made our way to “Dog Mountain” where there was a Dog Chapel. Unfortunately it was late in the day when we arrived in town, so the chapel was closed.

We still enjoyed wandering around the property, then we checked out a creepy piece of land for sale down the street that was being auctioned off.

We loved Vermont a little too much, and needed to make our way to some of the other states in New England before we ran out of time, so we made our way south towards the state line into New Hampshire via I-91 to I-93. We stopped along Route 135 in Littleton, NH at a Walmart for the night. I ate a tuna sandwich while sitting in a cloud of mosquitoes before we headed across the street at Applebee’s to kill some time drinking beer, sucking up free WiFi and watching TV. The GOP debate was on CNN, and then news about a bad earthquake in Chile.

Start from the Beginning at Part 1: Highway Robbery, Festivals & A Kiddie Pool

One thought on “Pt 5 – Dreadlock Rugs, Silverware & A Dog Chapel”