After grabbing Dunkin Donut’s coffee from inside the Walmart, we took I-93 south to Franconia Notch State Park. We enjoyed a very scenic drive around US-3, making our first stop near the ‘Old Man of the Mountain.’ Unfortunately, the natural rock formation that resembled the face of an old man had collapsed during the spring of 2003. 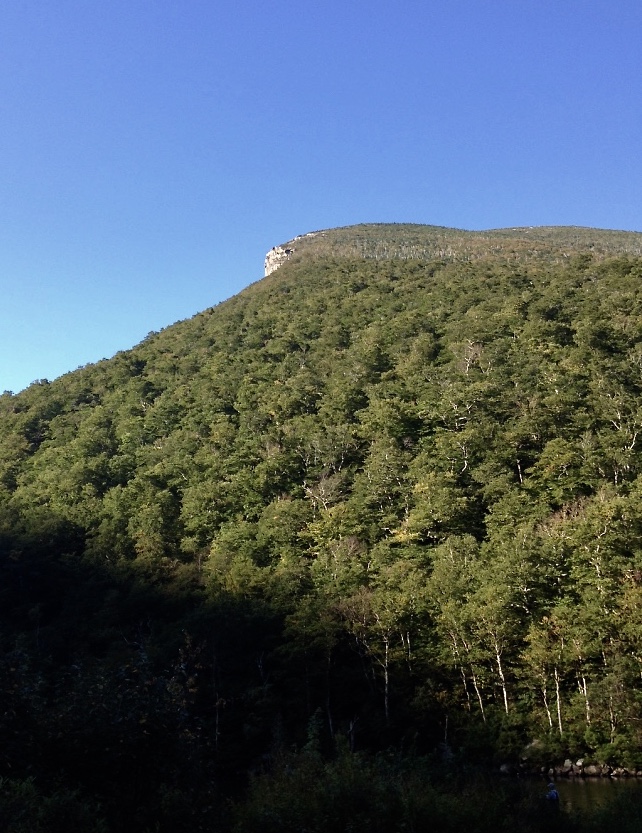 There was a public outcry to rebuild his profile, however it was determined to be too unstable to do so. We missed out on the ‘old man,’ but the scenery was still stunning! 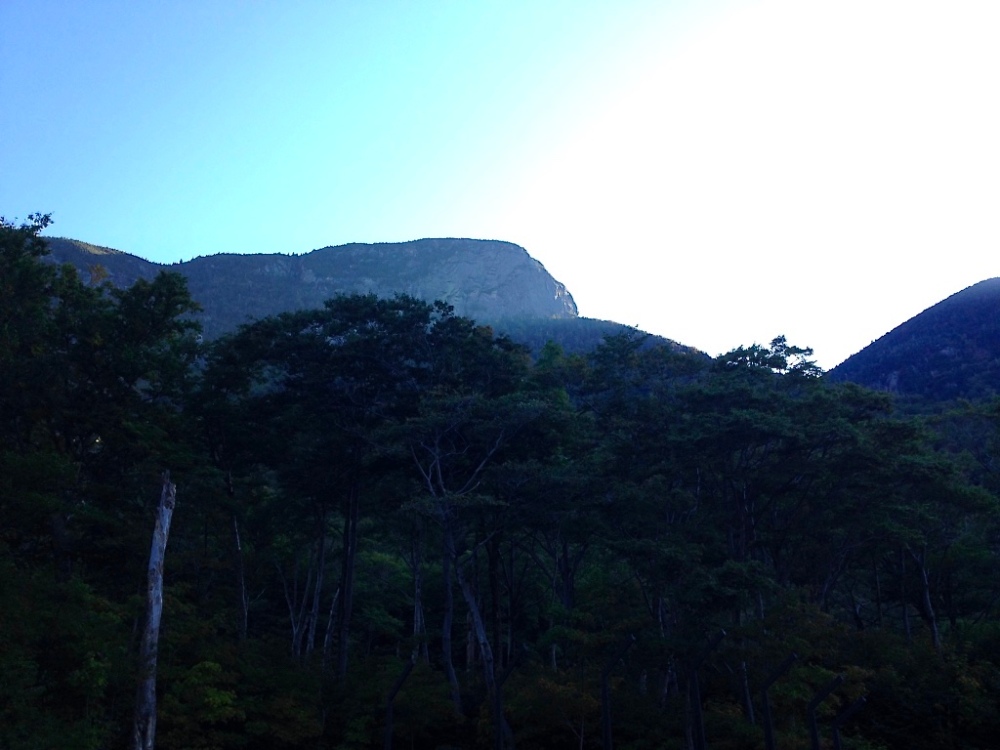 We made our next stop at the Flume Gorge Visitor Center and paid the $16 to enter the park. It was a very pretty and well-kept place, so it was nice to know the fee was being well utilized. After the hike, we scoped out the trout pond and ate lunch by the car. 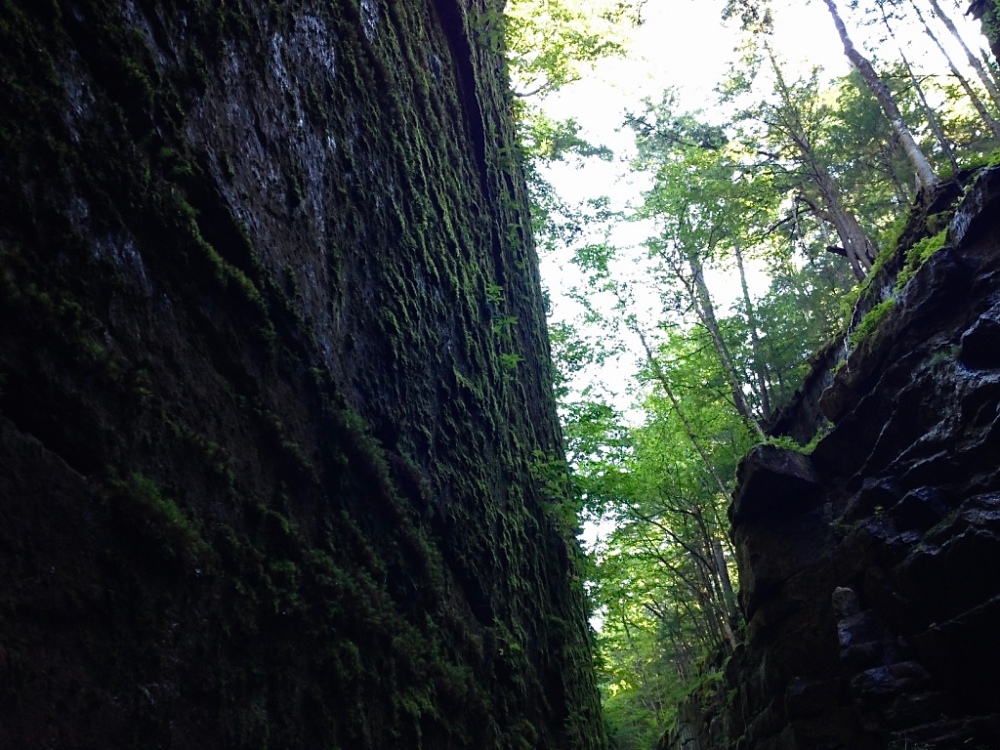 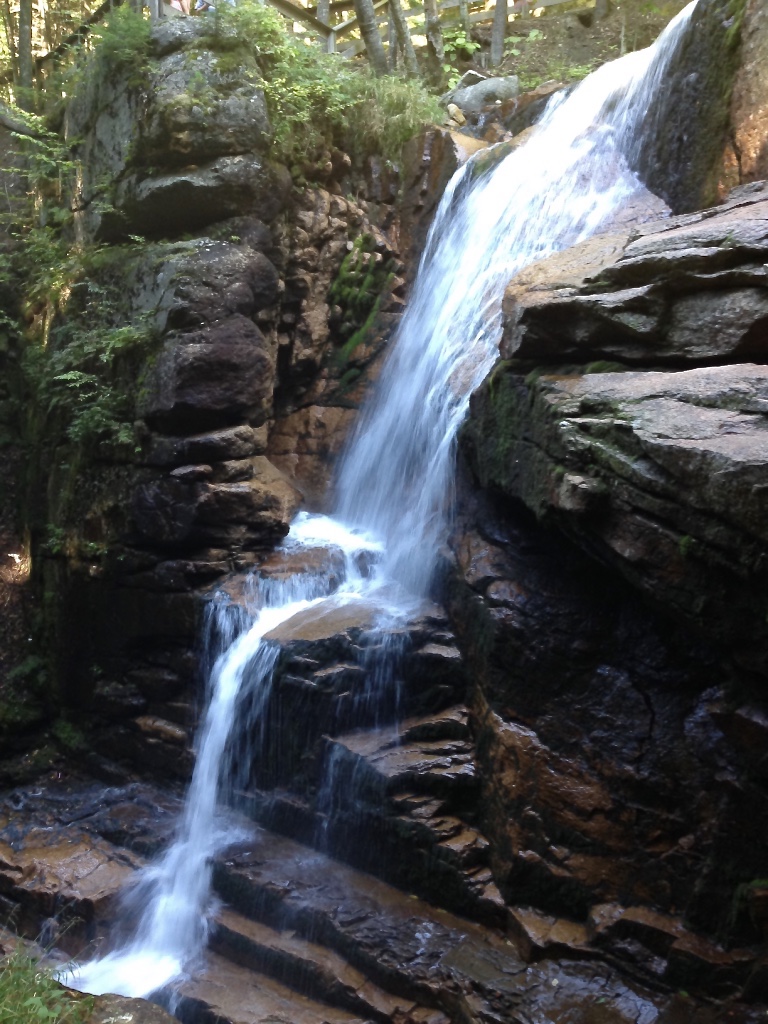 We took another scenic drive back up US-3 north through the White Mountain National Forest, then along US-302 east, making a pit stop at “Drummond’s Mountain Shop” before entering Crawford Notch State Park. 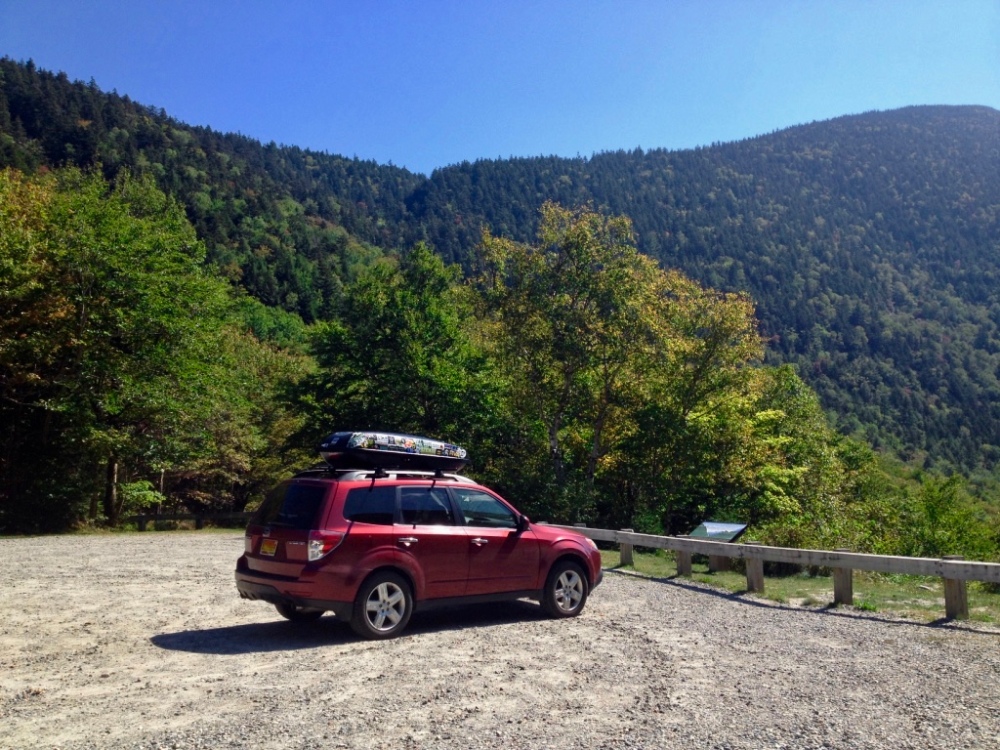 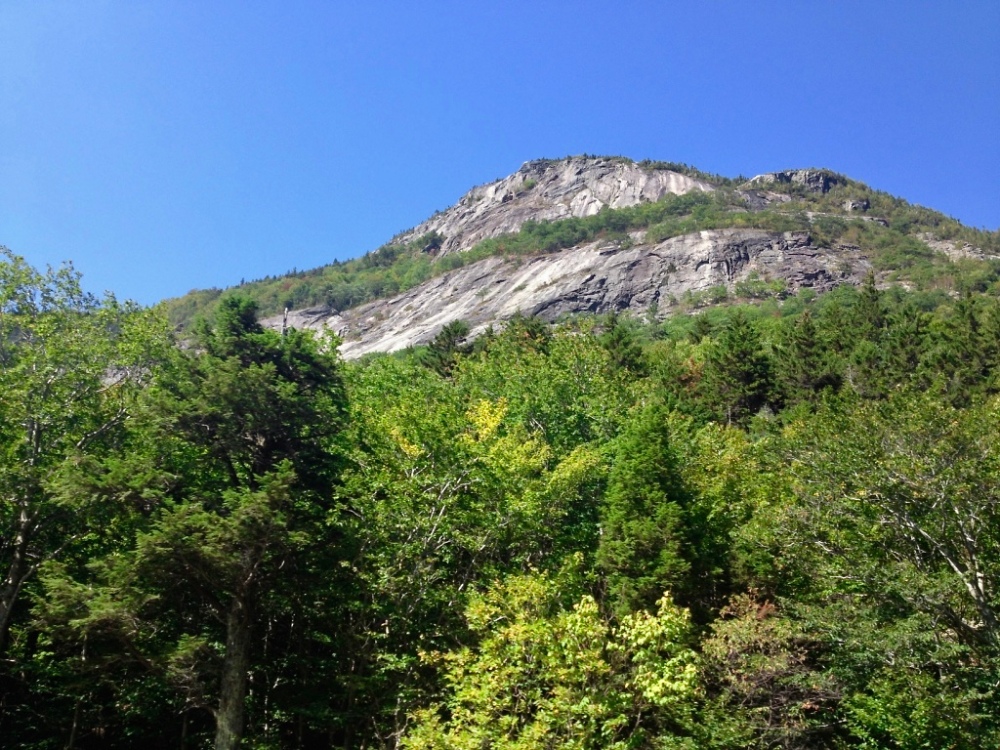 There, we saw even more incredible mountain views. We drove through the Appalachian Trail road crossing, an area we would return to on foot in a couple years, then stopped at a visitor center right outside of North Conway, NH. After sucking up some more views of the mountains, we made our way into town.

It was beer-30 and we got our fix at “Moat Mountain Smoke House & Brewing Co.” Trevor got the ‘Iron Mike Pale Ale,’ and I went for the ‘East Intervale IPA’ as we listened to some good tunes. I salivated over the menu and all the food everyone was eating. We didn’t eat there, but I highly recommend giving it a try if you ever pass through!

We traveled deeper into the town of North Conway to park and strolled through all the shops. We ordering more beers at “Horsefeathers” where we both snagged a Sebago Brewing Company’s ‘Frye’s Leap IPA.’ We chatted with the bartender and a waitress named Crystal. Crystal had just gotten off work and snagged some very dry crackers from the shop next door. The bartender doctored them up with some horseradish and mustard, which they shared with us. Afterwards, we crossed the state border into Maine! 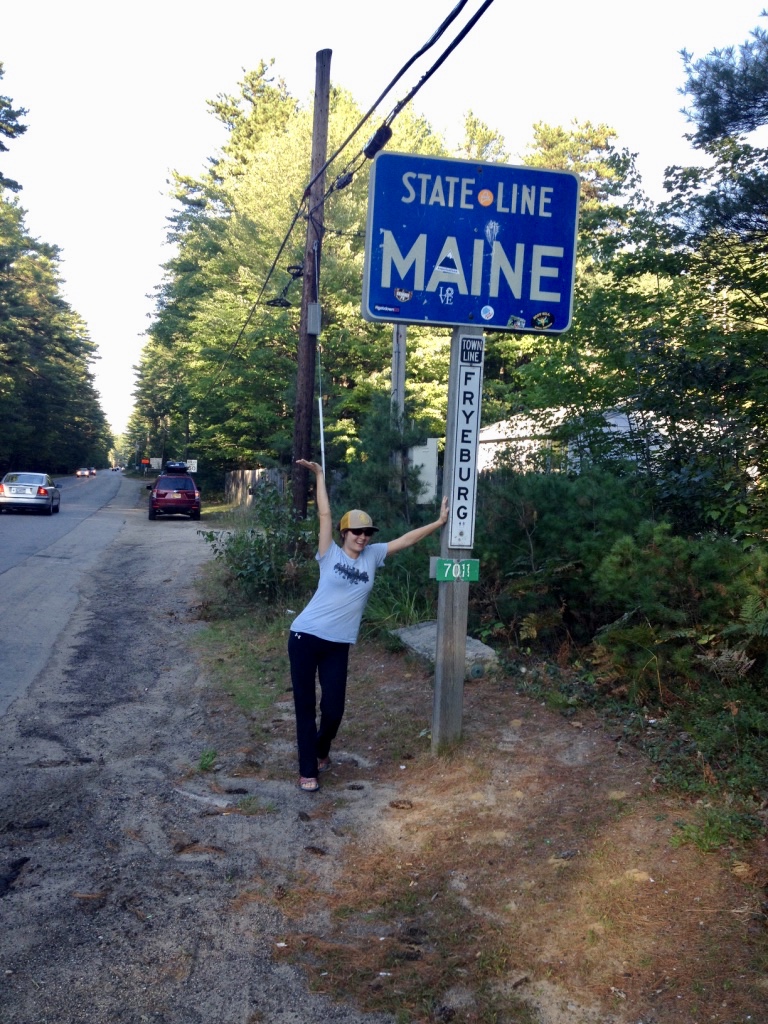 There was a visitor center near the state line run by a cute old couple who handed us a stack of pamphlets, and recommended a number of cool campgrounds to stay the night at. So far, Maine smelled refreshingly like pine as we drove with the windows down to Fryeburg, ME where we stopped to grab ice and deli meat at a convenient store. Some wild turkeys were wandering near the road as we approached Sebago Lake State Park Campground in Naples, ME. 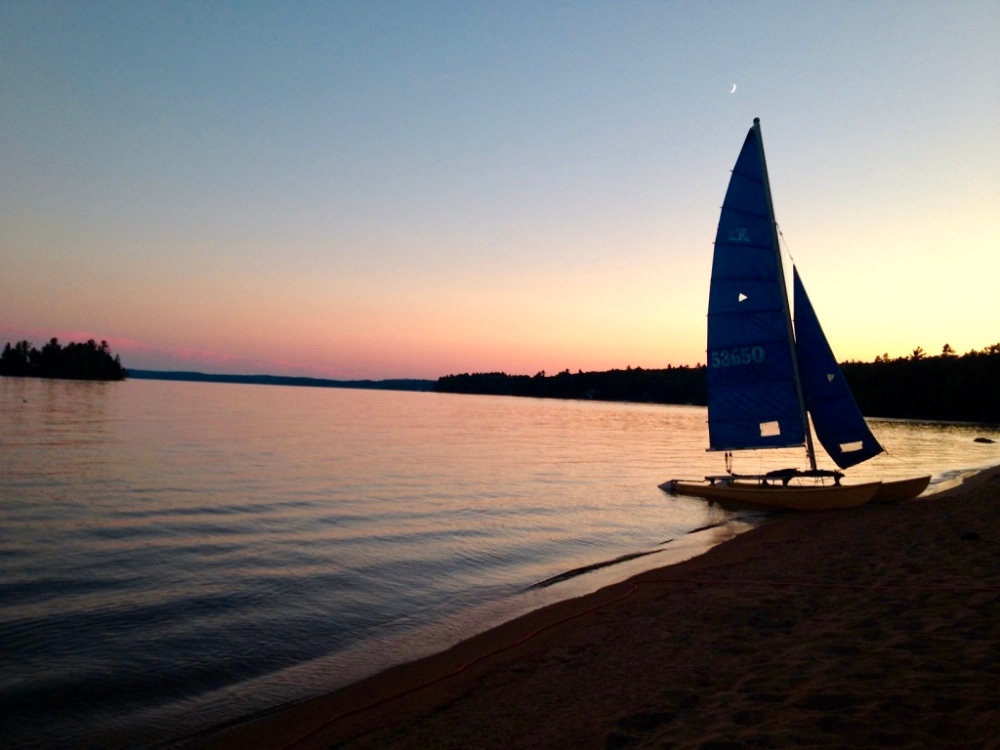 Once we settled in at site 204, we ate sandwiches before walking along the beach by the lake. The sky was a blanket of stars, and was clear of enough light pollution that you could see the Milky Way. We watched a few shooting stars dart across the night sky, then we listened to the loons as we slept.

Jump Back to Part 5: Dreadlock Rugs, Silverware & A Dog Chapel

Start from the Beginning at Part 1: Highway Robbery, Festivals & A Kiddie Pool