The Cirque of the Towers Route left me speechless. 😶 All the views. ⛰ All the #rainbows . 🌈 All the #lakes . 🏊🏼 The Winds have stolen my heart. 😍
Had a good time in #lander then a horrible time back on trail climbing over the worst blowdown section I’ve ever crossed through. 😖 Our group got separated in the mix. The days that followed would make up for the headache. The Cirque of the Towers Route was amaze balls! 😍
The Basin. Pretty much just vast nothingness, a few pronghorn, and lots of cows. It was mostly dry and hot, although we did experience some thunderstorms. Also, my oxen broke a leg 🐂 and I have died of dysentery on the Oregon Trail.🤠 These things happen. 🤷🏻‍♀️
We hitched back from Encampment and accidentally camped on private property. 😬 Fortunately, the guy wasn’t mad when he found out we were CDT hikers and let us stay. Our views were hazy due to the wildfire smoke. 🔥 We passed through the affected area two days prior! A road walk to Rawlins followed, and we found ourselves herding cattle and dodging cow diarrhea. 🐂 💩 I was relieved to lay in a bed after inhaling some town food. I’ve been battling some nasty sciatic pain and blisters. Hiking through the basin wasn’t going to be too helpful.
One more state complete! Colorado was a blast and it was great to spend the last few days there with fellow AT hikers. Thanks again for the trail magic and the hospitality, @robinurthoughts and @urmygirl_blue You guys rock! Our #tramily has grown from 4 to 8 and we’re ready to take over Wyoming! Hammer down! 🤘
We destroyed some food when we reached Grand Lake. The damage from last year’s wildfires caused us to miss out on the bulk of the Rocky Mountain National Park section, which sucked. We also had to maneuver through many blowdowns, but the views during the climb up and down Parkview Lookout were amazing! The next day, we tackled a 37.4 mile day and made it to Steamboat Springs for the holiday weekend! 💥🇺🇸 🍔 Next stop, the Colorado-Wyoming border! 🤘
Sooo… we had to hike out of Winter Park otherwise we were gonna have to apply for employment. It was time! We weren’t too keen on hiking on top of mountains during a lightning storm, nor were we thrilled about the “impassible” blowdown section ahead. So instead, we connected the road from Berthoud Pass to the Fraser River Trail to the Fraser-Granby Trail. There was a lot of cool art, signage and wildlife along the way.
The climb to #grayspeak #summit was brutal, especially while having some of the worst altitude sickness in my life. 😵‍💫 But I fought off the nausea, gave my legs a pep talk and conquered my second 14er. The views were motivating, and the knifes edge before the final climb was awesome aside from the wind blowing me around like a plastic bag. The icing on the cake was seeing mountain goats during the hike down! ❤️
I was stoked to finally leave the very groomed Colorado Trail section so I could experience some new terrain. We had some big climbs, but we were rewarded with great views!
Posted on October 17, 2018October 24, 2018 by Stubbs

Our guide was super informative as he pointed out the significance of every small detail of the temples we witnessed. The first temple we went to had architectural influences from numerous religions, and some of the temples are still in use today. Those that are still in operation have flags on them, such as the one neighboring the Lakshmana Temple dedicated to the Hindu God Vishnu.

He pointed out the meaning behind the various postures and positions of the sculptures carved into the temples. For example, a hand held low with the palm facing up is symbolic for preaching, a palm facing out is praising, and the “okay” hand gesture is for concentration. There appeared to be small children carved in the walls nearby larger figures. He informed us that the smaller figures weren’t children as we suspected, but servants. 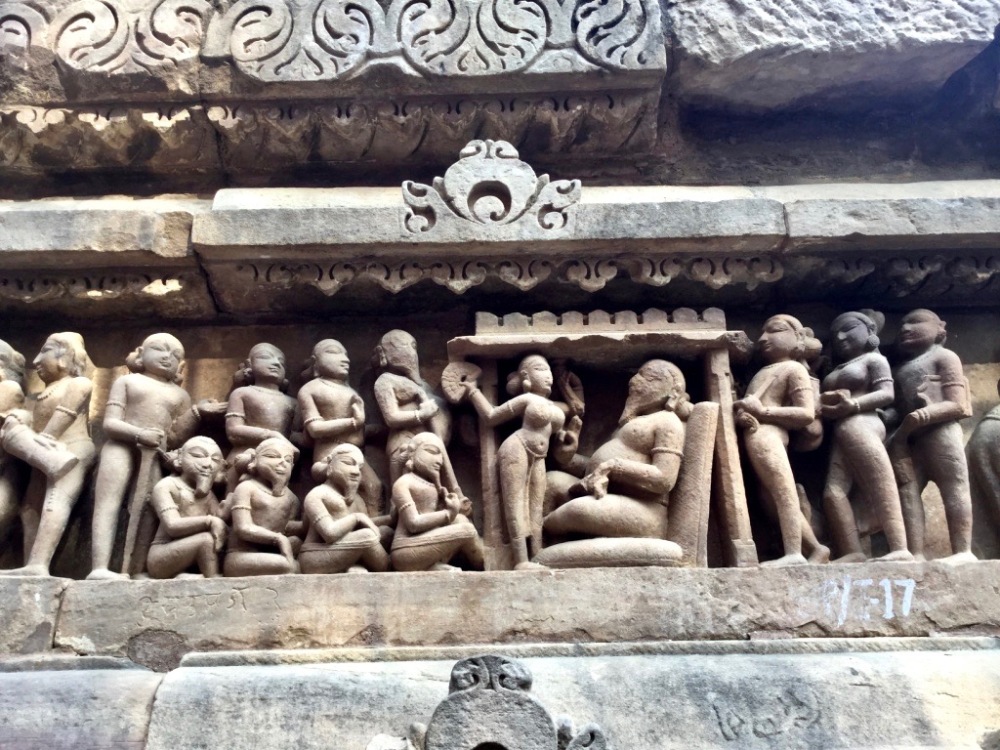 There was a couple doing the 69-position next to another couple doing the 71-position. The guide warned us about the dangers of position 71 as he pointed to the headless figure engaging in the act.

We all got a chuckle as he pointed out the “polished” body parts on some of the temple figures caused by too many hands caressing them. There were a lot of shiny boobs to say the least. 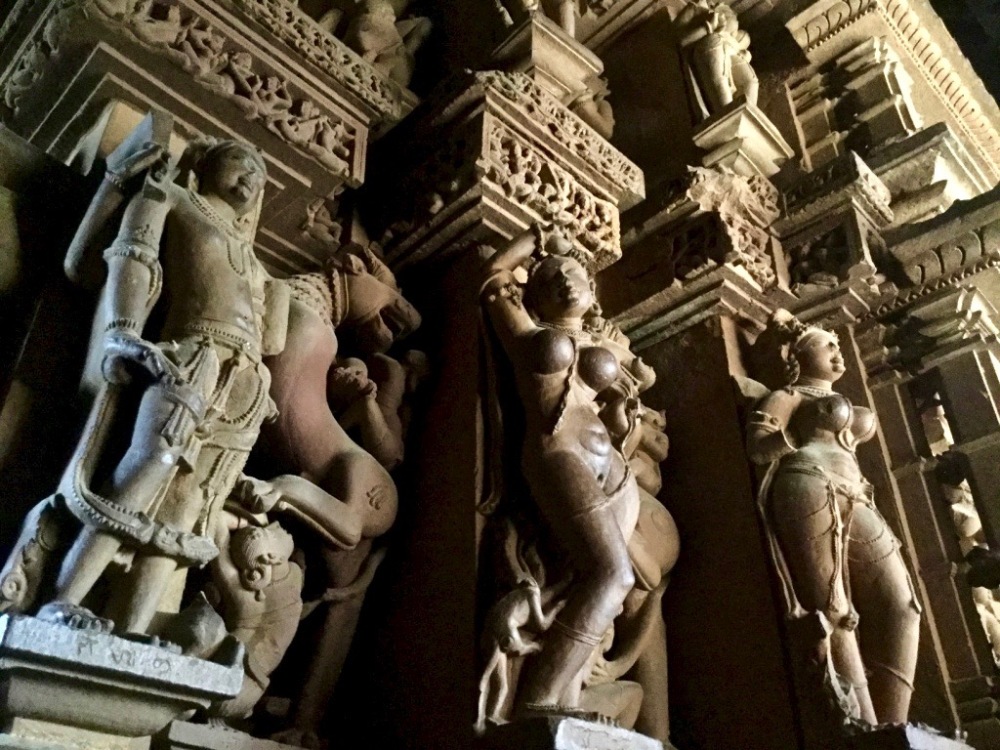 In order to find one of the many gods amongst the mess of figures, he said you only have to locate the ones with multiple sets of arms. 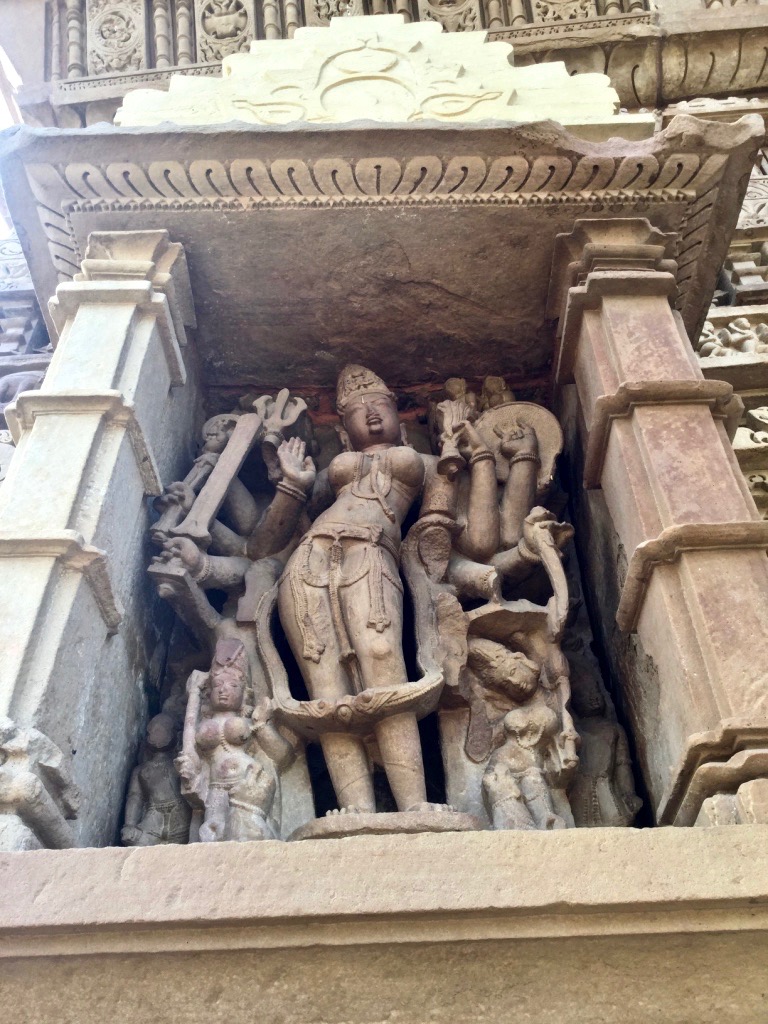 Most of tour was focused on Vishnu’s temple, but eventually we moved on to Shiva’s temple called the Kandariya Mahadeva temple. 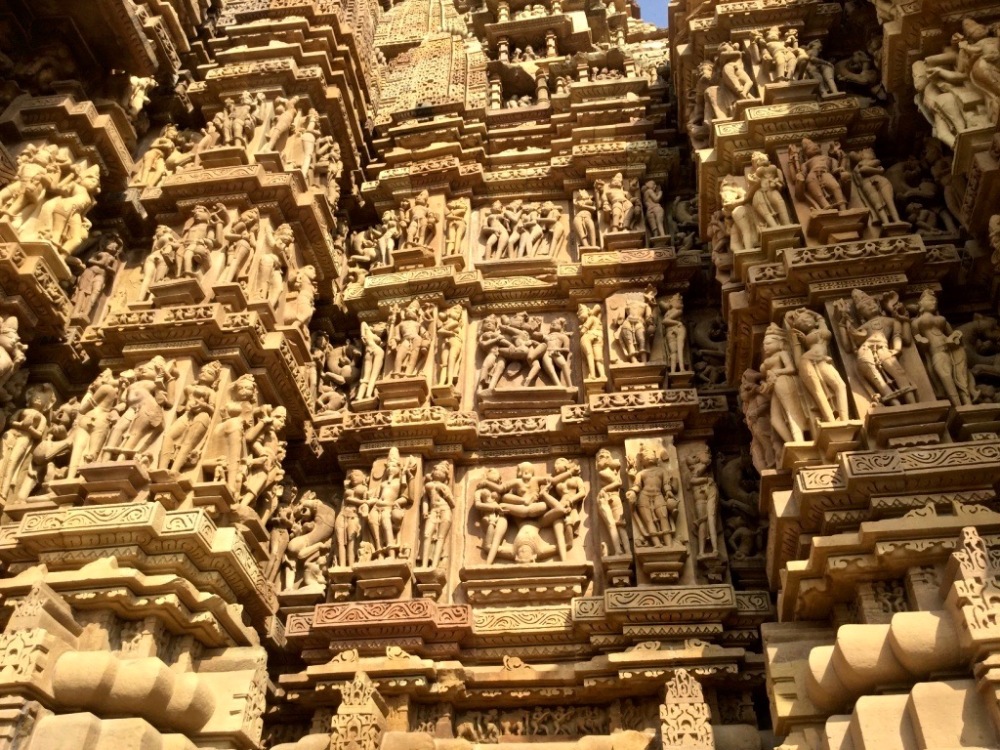 The tour was great, but we had worked up an appetite, so we headed around the corner to Raja’s Cafe for lunch. My husband’s boss’s wife Heena, who is also Indian, makes the best egg curry, and I had a hankering. We convinced one of our new Aussie friends to give it a go as well. It wasn’t as good as Heena’s egg curry, but it was damn close! The banana lassis weren’t too shabby either.

Trevor got recognition for his beard as we walked off our meal. One of the shop owners was awfully insistent on getting us to buy things from his shop. “You must come in and check out the store! Come and look! You promised yesterday that you would return!” We had just gotten there today, but we were still very amused by his determination. We laughed and returned to the truck, and then Trevor was lit up by a wasp.

Upon our arrival, the truck had unintentionally parked under a wasp nest which we bumped into and disturbed as we parked. They were swarming everywhere, including the inside of the truck since the windows were partially opened. I scrambled to help the others get the windows shut and was fearful of getting stung. I’m not allergic enough that I’d go into anaphylactic shock, but a wasp sting would still make me swell enough to require antibiotics. Some of our crew got stung in the process, but I was fortunately unscathed.

I failed to nap on the way to Orchha, only catching a glimpse of a bloody cow skeleton as we reached our camping site in the “bush.” If you’ve ever been to northern India, you’d realize that there are limited places you can go to escape human civilization. We ended up camping on the property of a local math teacher named Manoj Kumar Yadev. This was hardly “roughing” it since we had toilet facilities nearby and pitched our tents on top of lush patches of grass.

After we pitched our A-frame tent with little difficulty, we joined the others by a small fire with beer in hand. Carmel shared a funny Aussie term she used back at home for getting up early, being to get up “at a sparrow’s fart.” Jules made it more comical when she misheard her say “asparagus fart”. With all the talk of flatulence, we were wondering what the unpleasant odor was lingering in the air. It was strong enough that it had us all checking the bottoms of our shoes.

I gave up on my beer after eating dinner. Of course the one time clean bathroom facilities were a small hike away was when my stomach started acting up. It was a cold night and I was absolutely restless. Between the frigid temperatures, frequent runs to the toilet, and the sound of what I believed to be gun shots resonating nearby, I would not be sleeping well.

Jump Ahead to Part 12: A Fender Bender, Blondes & Baby Taj