As the truck pulled out of the city, we all waved goodbye to Ali. He had been a great host. Our guide to Agra Fort resembled a Bollywood star with big hair, flashy attire, and an interesting accent. We rode with him on the bus to Fatehpur Sikri, an ancient Mughal city on the outskirts of Agra. He told us how he used to play hide-and-seek throughout the grounds of the Panch Mahal when he was a child, before it became a UNESCO World Heritage Site in the mid 80’s, so he knew the area well. 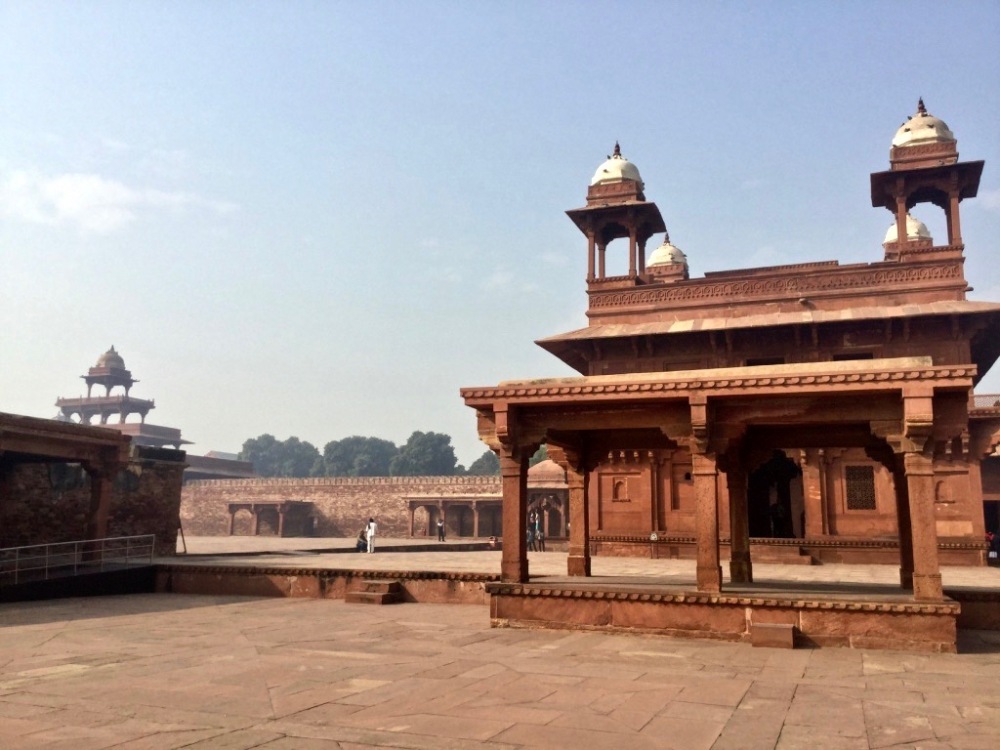 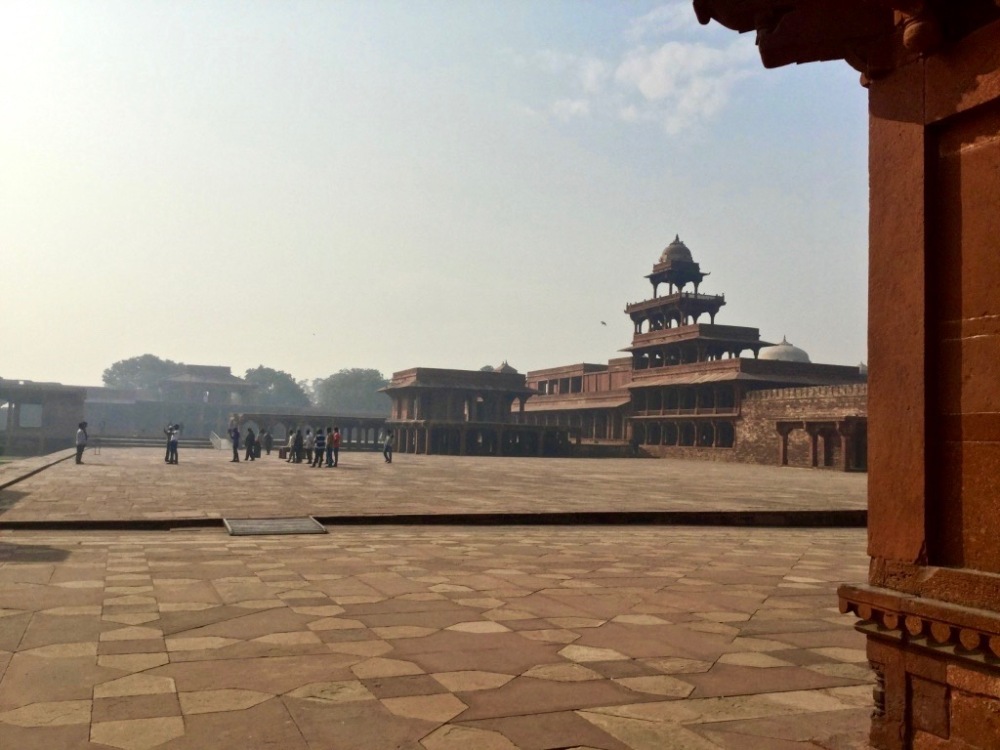 Some interesting things he pointed out was a memorial in the distance for an elephant whose job was to stomp criminals to death, a large “playing board” in which women were used as play pieces for a human-sized Indian-version of Parcheesi, and the different architecture found within the three separate homes for the emperor’s three wives, all which had different religious backgrounds. Apparently the emperor needed medieval Viagra transported from Agra in order to please his three wives and 600 mistresses. He was a very busy man.

After walking around the palace, we walked to Buland Darwaza (“Gate of Victory”), or Agra Gate as the guide called it. It’s the second tallest gateway in the world next to one found in Rome. Once we got there, we had to remove our shoes to enter the Jama Mosque, which were patrolled by a paid “guardian of shoes.” I usually don’t get sucked into the “tourist paranoia” mindset, however the overwhelming bombardment of vendors and beggars upon arriving was enough to make me realize that without someone keeping watch, there was a very good chance our shoes would be wandering off on another person’s feet! 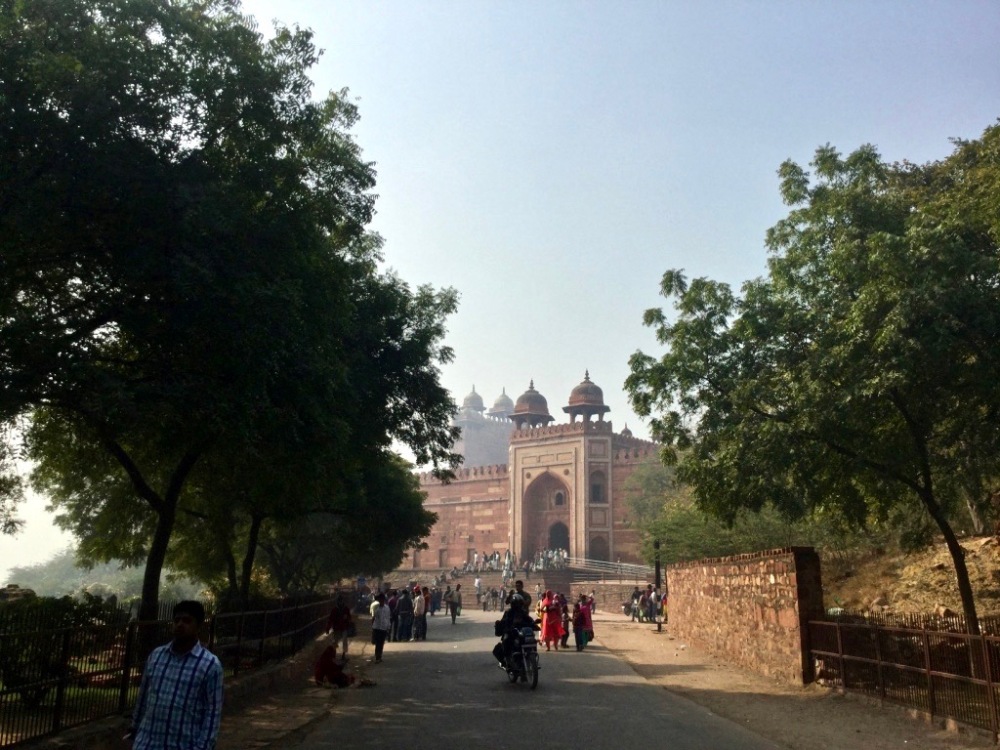 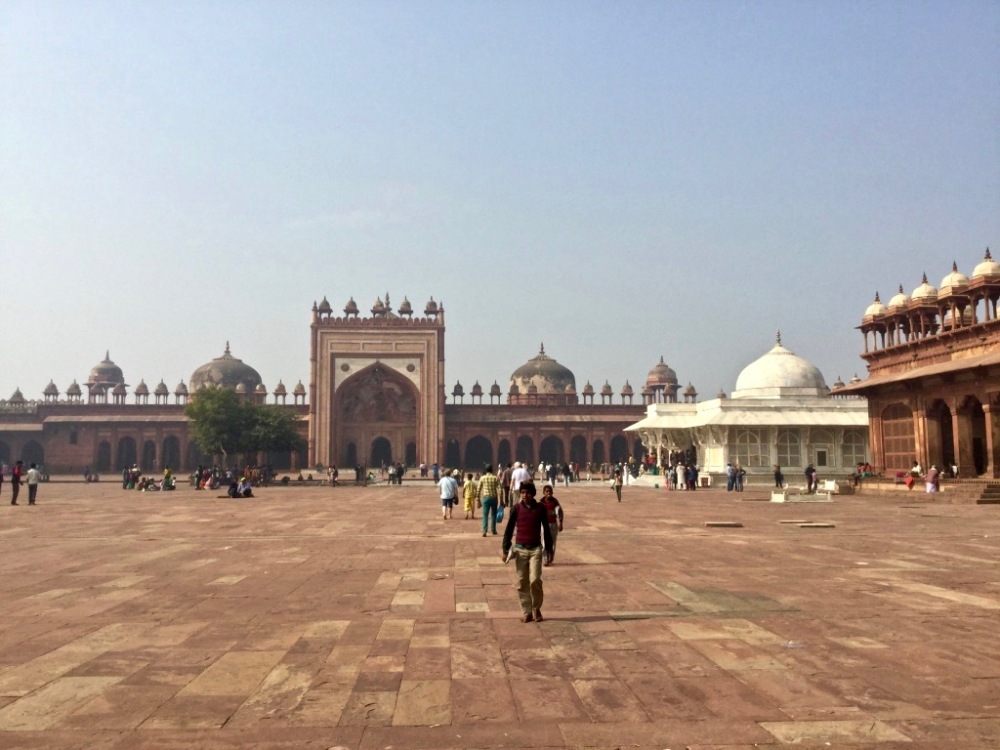 My head needed to be covered before entering the tomb, so I borrowed one of their sweet hats before having to return it when I doubled back to the courtyard. 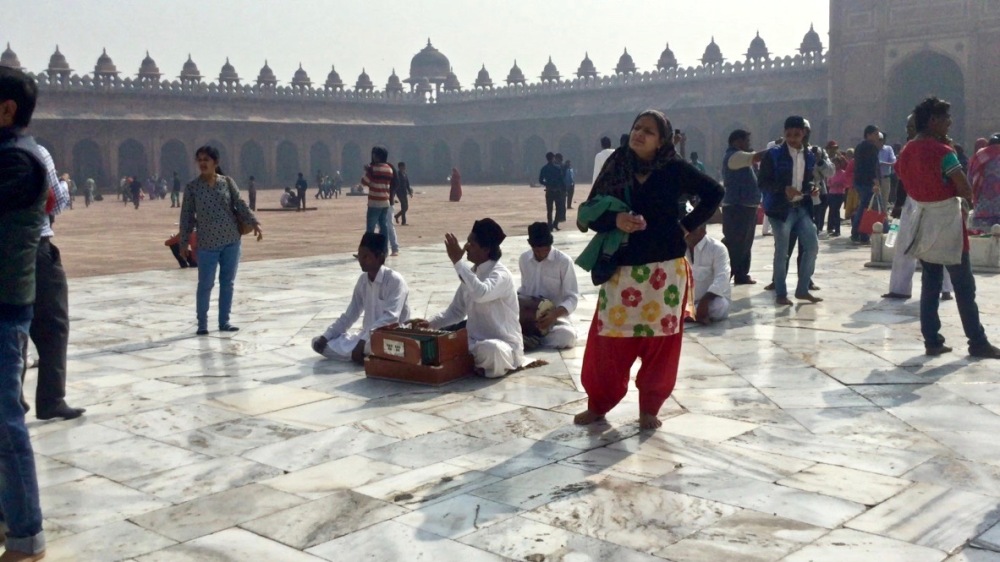 Per usual, we were asked by many Indians to get our picture with them. The children kept calling Trevor “Ali Baba” as they stroked their chins. They were digging the beard! This would become his nickname throughout India.

Beggars would chase us down, “Where are you from?”

This dialogue would be reiterated many times throughout our short walk around the courtyard. It was all fun and games at first, but after having one too many products shoved in your face that you have zero interest in buying, it gets a bit exhausting. They really started hounding our pal Rick, who’s rather soft-spoken. We practically had to escort him out of there. They really wanted him to buy pens.

“My family has been making these pens for many generations.”

They were the same pens that nearly every vendor in India was trying to sell. Apparently, they had an extraordinarily large family.

After pushing through the vendors and beggars, we went to get some Thali for lunch. I walked across the street to use the bathroom before we left and the bathroom attendant tried ripping me off. All I had was 500 rupees on hand and he only gave me 200 back. You generally only give them 10 rupees. I forced a smile as I disputed his claim, and he eventually decided to give me the proper change back. After wrangling a couple of the girls from their shopping spree, we were back on the road and heading to Jaipur, the pink city.

We saw more camels, and children flying their kites. There were several stores on the side of the road selling large stone statuary and vases. We also passed by decorative wedding venues scattered between the mountains. Not only did the scenery change, but each town we passed through seemed to be less and less poverty stricken. People also seemed to be following traffic signals, funny enough.

We finally arrived at Hotel Bissau Palace. After dropping off our belongings, we met in the library where we were surrounded by old relics and paintings, to listen to our guide, AJ about the history of the hotel and the Royals who once lived there. He talked about the fall of the royal empire and how some royals fled to Pakistan in hopes to retain their riches, while others were promised three generations of their comfortable lifestyle before they were demoted to normal citizens of India. The more successful royals got involved in politics and/or flipped their palaces into heritage hotels like the one we were staying in. Others retained middle class lifestyles or fell into poverty. 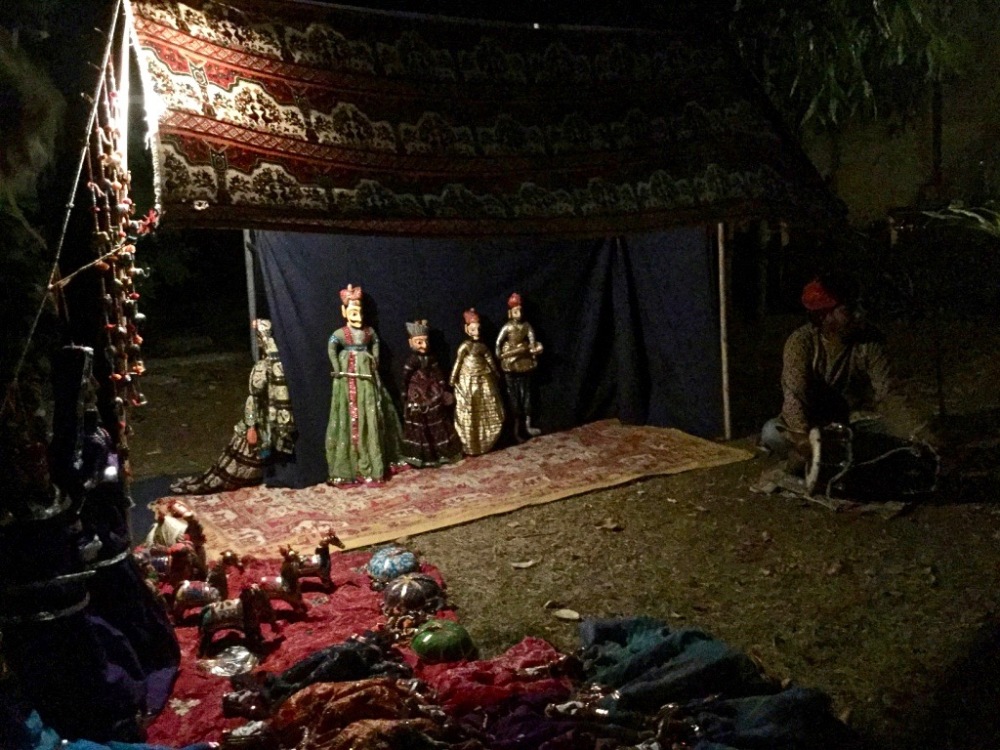 The puppet master then volunteered a few of us to have a go with handling the puppets. Trevor had the very embarrassing honors of the puppet fornication act. With red faces, we headed inside for an incredibly delicious dinner of mushroom curry and chili paneer while listening to music. Kinda. It was more like listening to band practice. The sitarist and drummer would play for 1 minute followed by long breaks to toy with their cell phones. I really would have liked to listen to them jam out, but at least dinner was really good!

Jump Back to Part 13: The Taj Mahal, Lapidaries & The Black Star of India

Jump Ahead to Part 15: A Hot Air Balloon Over Jaipur