Farewell Oregon! Hello (again) NorCal! But not for long. Had a blast hanging out with friends, old and new in Ashland before making our way to the border. Met one of the best trail angels, Big Mama there who shuttled us everywhere while refusing any donations. You’re amazing! It was a huge relief to connect our footsteps from Canada after the McKinney fire forced us to flip. The previously closed section between Seiad Valley and Etna was dope! It was bittersweet leaving Etna to start hitching back to South Lake Tahoe to pick up where we left off. I really miss you guys @gwebsterb and @cole.pc It was a blast hiking with y’all! Took us only 5 hitches (Weed to Shasta to McCloud to Old Station to South Lake) with some really awesome folks to reach our destination. Should be back on trail and Mexico bound 🇲🇽 on Wednesday. Time to wrap things up and get this triple crown already!
We could see the plume of smoke from the Cedar Creek wildfire for days from Mount Thielsen Wilderness to Sky Lakes Wilderness. However, this stretch of trail was amazing! Mount Thielsen is apparently the “lightning rod” of the Cascades and I would have loved to summit it to see the fulgurites (spots where the rock was melted and crystallized). That will have to wait another day. The smoke left the views at Crater Lake National Park a bit hazy, but it was still absolutely gorgeous! Plus it marked Frisbee and my unofficial halfway point on the PCT. Sky Lakes Wilderness to Fish Lake was also not disappointing. The forest was thick and there were so many different conifers, plus I saw two bears. Oregon is coming to a close, but it’s been dope!
Walking by the Three Sisters made us feel like we were walking on Mars. By the time we reached Elk Lake Resort, we caught word of a new wild fire just ahead with a PCT closure. Add it to the list! We recruited some new friends to join us on the road walk around the fire the next day. Only about 8 of the first 40 miles involved walking through thick smoke and there was broasted chicken with jojos in town when we finished. After a pancake breakfast at the firehouse the next morning, we took the railroad tracks to Shelter Cove.
Oh geez, I’m so behind! We left Timberline Lodge feeling sluggish and hitched to Government Camp. So glad we did since it was one of our favorite places on trail! We got some incredible views of Mount Hood and Mount Jefferson before passing through the Lionshead burn area. The devastation was huge, but it was still a beautiful section. Saw mountain goats at the base of Three-Fingered Jack before hitching to Sisters, where we had an awesomely unexpected zero (Thanks @wildturkeytrotsthru )! We said goodbye to the #llamas and hiked through a lava rock field as we approached the Three Sisters.
The day leading up to it was socked in with fog, but we made it to Timberline Lodge with some sweet views of Mount Hood. The buffet was all I dreamed of, the lodge was beautiful, and I got to hold the ax from “The Shining” before dippin’ out! My only regret is not summiting Hood before I left, but we’re on a time crunch and it’s a damn good excuse to come back!
Hello Oregon! After taking an alternate and sleeping next to a guardrail on a busy highway, we night hiked across the Bridge of the Gods and left Washington state behind us! Got to celebrate my birthday in Cascade Locks and hike a very scenic alternate back to the PCT munching on blackberries. Tunnel Falls and the whole Eagle Creek stretch was dope! 😍 Hopefully now that most of Oregon is opened back up from all the wildfires, we can finish it up before jumping back down to Echo Lake. 🤞 We shall see!
I made friends with a #marten and saw a cool #waterfall after working my way down from #goatrocks We enjoyed a nice pit stop at Trout Lake then ran into our buddies Walter White and JeffR from the CDT, and back into Flamingo Kid and Yardsale who we hadn’t seen since flipping from NoCal. We also got to enjoy some more #trailmagic thanks to Cowboy and Mrs. Cowboy, and Peppa and his doggo, Pudding. Our bad times seem to be behind us as we get closer to the state border. Finally!
Goat Rocks blew my mind! See for yourself. 😯
More familiar faces on trail heading to White Pass! Ran into Monkey Man from the AT ‘17 in the cabin, and more of our beloved CDT homies! Our luck has improved too. After missing trail magic two days in a row, we started receiving some of the good good from some wonderful trail angels. The end of our trek through Washington state is in our crosshairs, and as much as I adore it here, I’m ready to hit that milestone!
Posted on November 28, 2018November 30, 2018 by Stubbs

Not just us, but a bunch of people in our crew felt like they woke up with the plague. To make matters more disgusting, Trevor accidentally dumped his malaria pills all over the dirty floor. I helped Carmel and Benedikt load the luggage on the truck before we headed out to risk receiving a more credible form of the plague. We were going to the small town of Deshnok to visit the Karni Mata temple, also known as the rat temple. Karni Mata was a female Hindu sage worshipped as the incarnation of the warrior goddess, Durga. All the rats are treated with the utmost respect there, however the rare sighting of white rats inside the temple are treated as sacred since they are believed to be the reincarnation of Karni Mata herself. 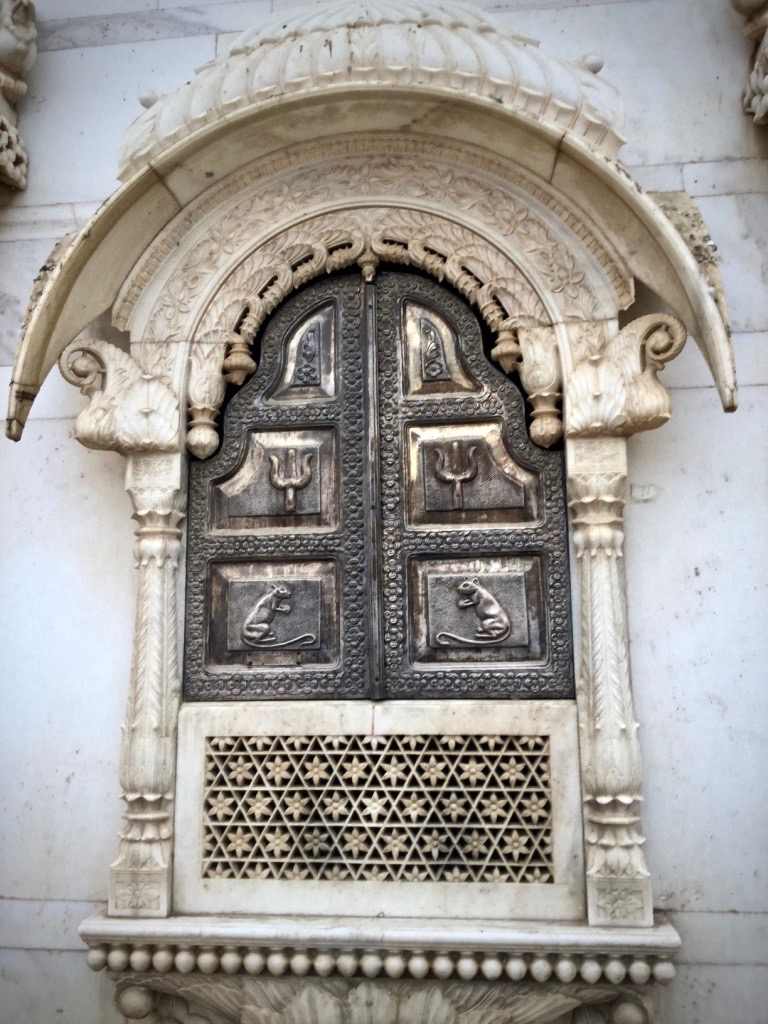 It was a cold morning, and we had to ditch our shoes to walk barefoot along the cold pavement into the temple. No shoes allowed in temples folks! Socks were allowed, but there was no point. I found that the rats themselves were kinda cute, however walking on rat food, rat droppings, rat urine and pigeon poop was pretty nasty. What made it even more gross was the fact that the caretakers of the temple were trying to clean up by dumping buckets of water on the soiled, tiled floor, turning the mess into a paste. My feet still haven’t forgiven me. 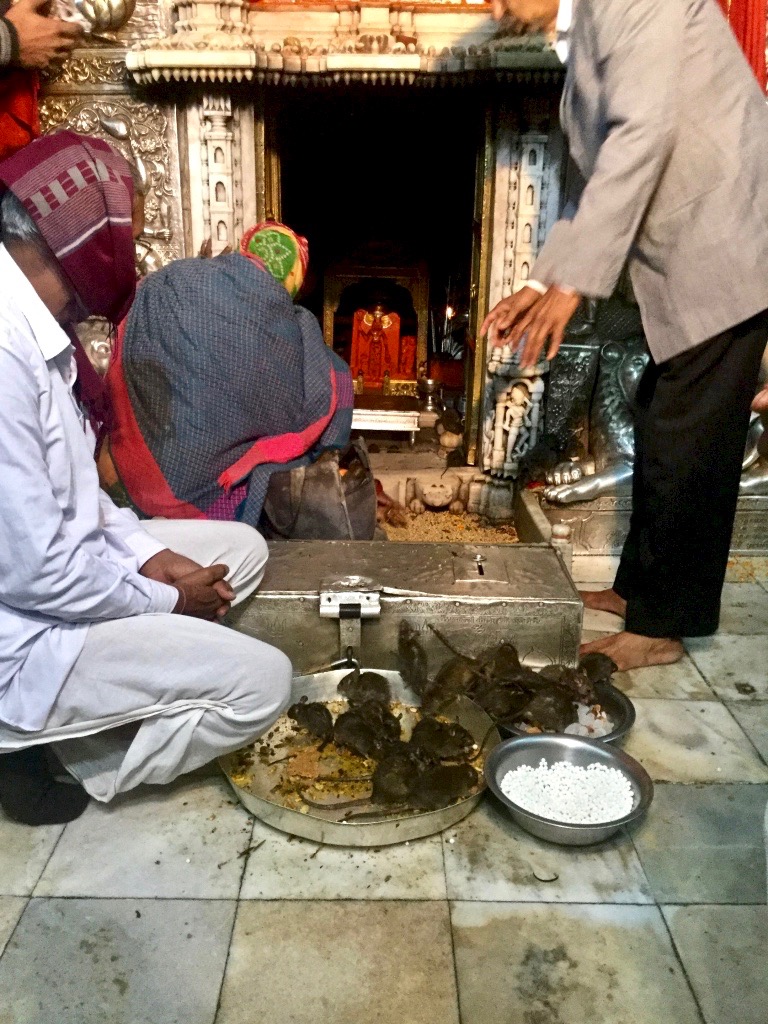 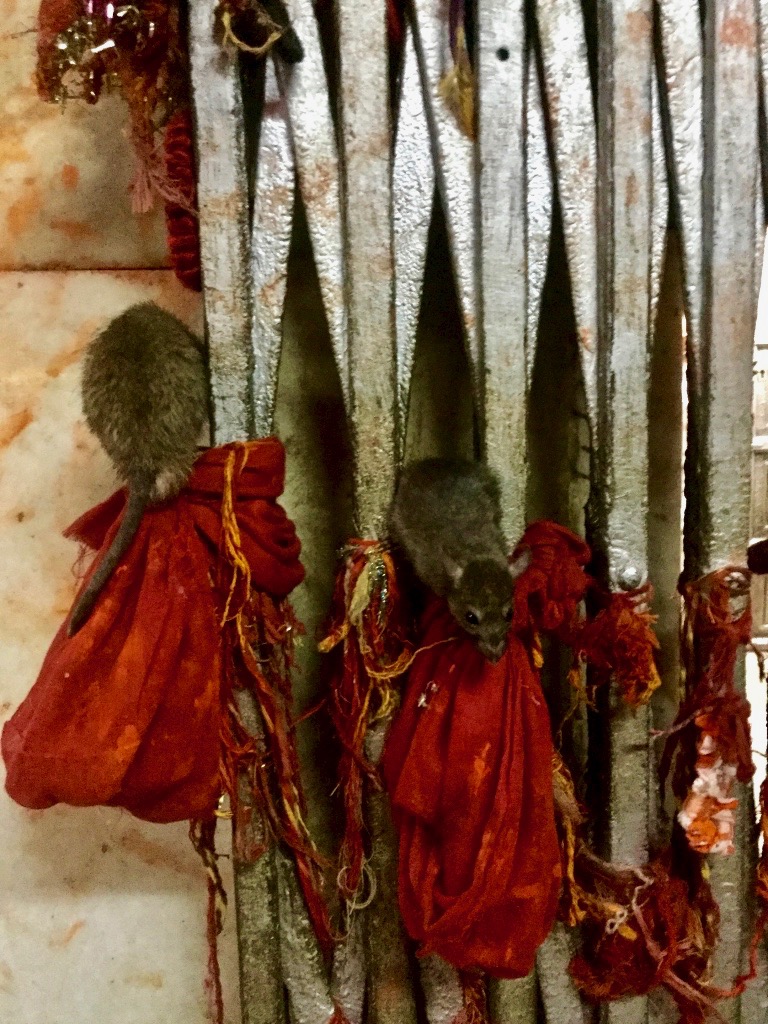 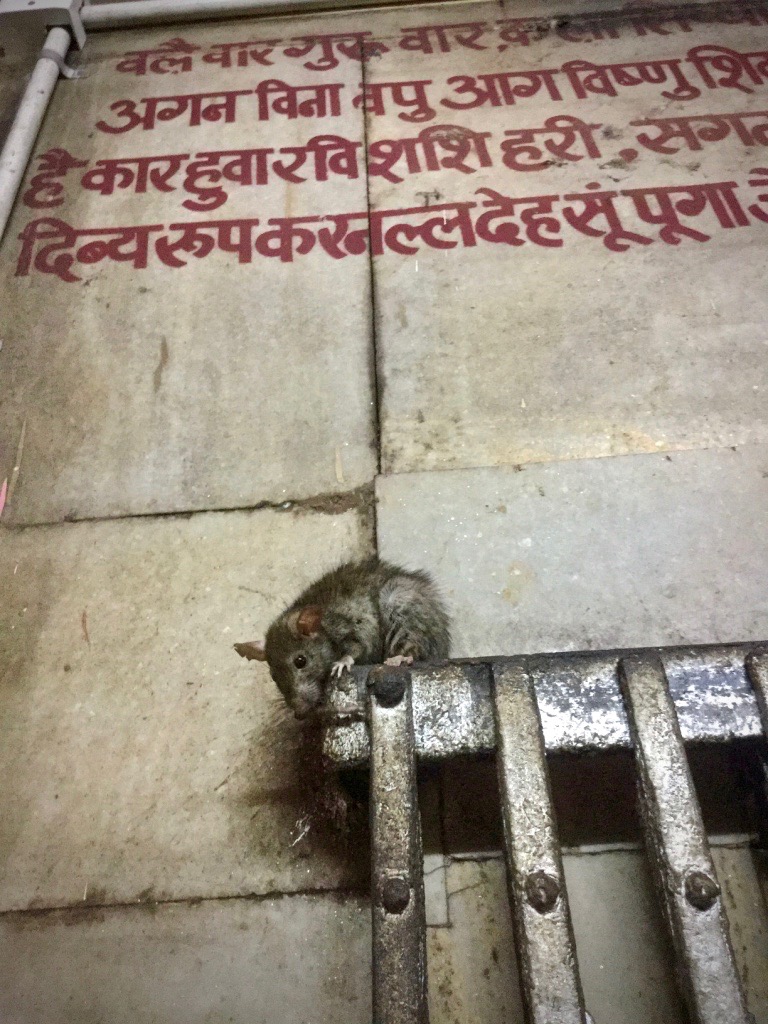 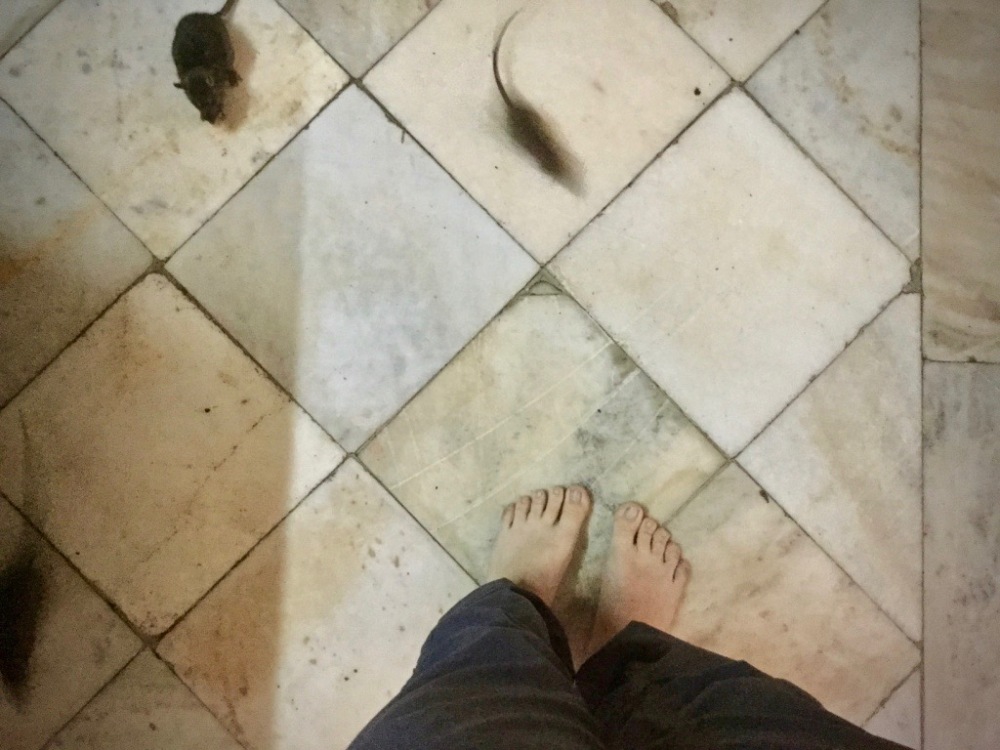 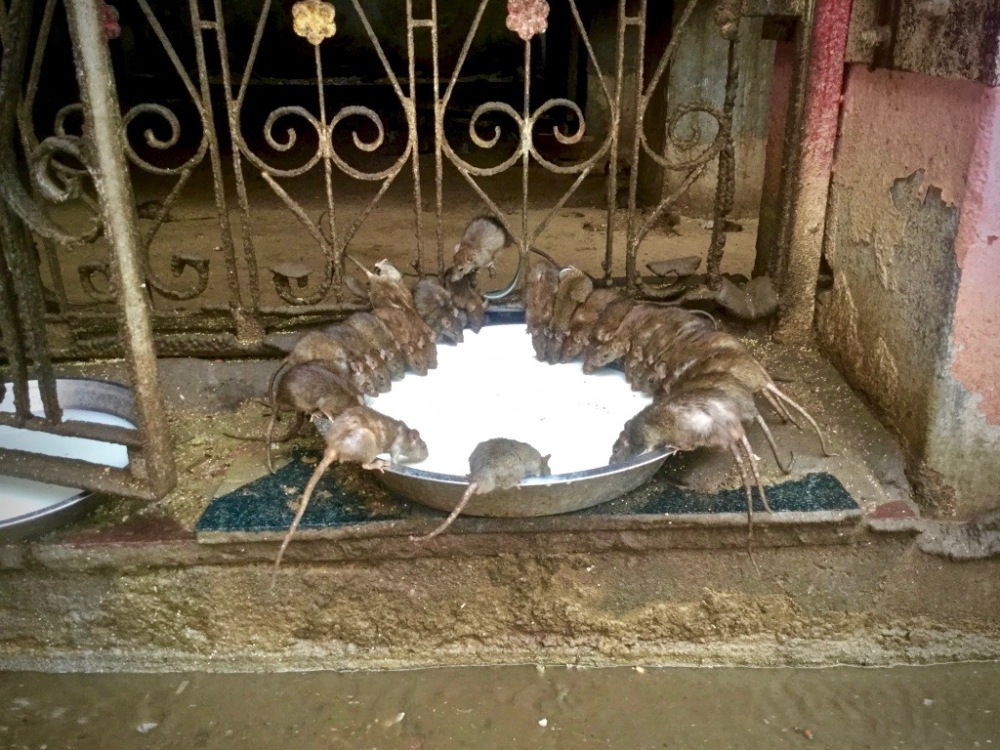 We were all grateful to find tubs full of soapy water to clean our feet in after walking back to the truck. It was now time to head to Jaisalmer, the “Golden City!” A city whose name’s pronunciation I will forever butcher!

After eating lunch at the Mumal Resort, we continued the drive, passing by a house with an airplane sculpture on the roof, a desert oasis in the distance, free-roaming camels, Indian gazelles, and a heightened military presence. There were tanks galore since we were near the Pakistani border. No combat during our trip aside from that going on in the truck:

One of the Golden Girls to Tom, “You’re not wearing your seatbelt.”

“What are you gonna do? Spank me?”

After unloading at the “Golden Haveli” hotel we joined some of the others in separate rickshaws to the gates of the Golden Fort. 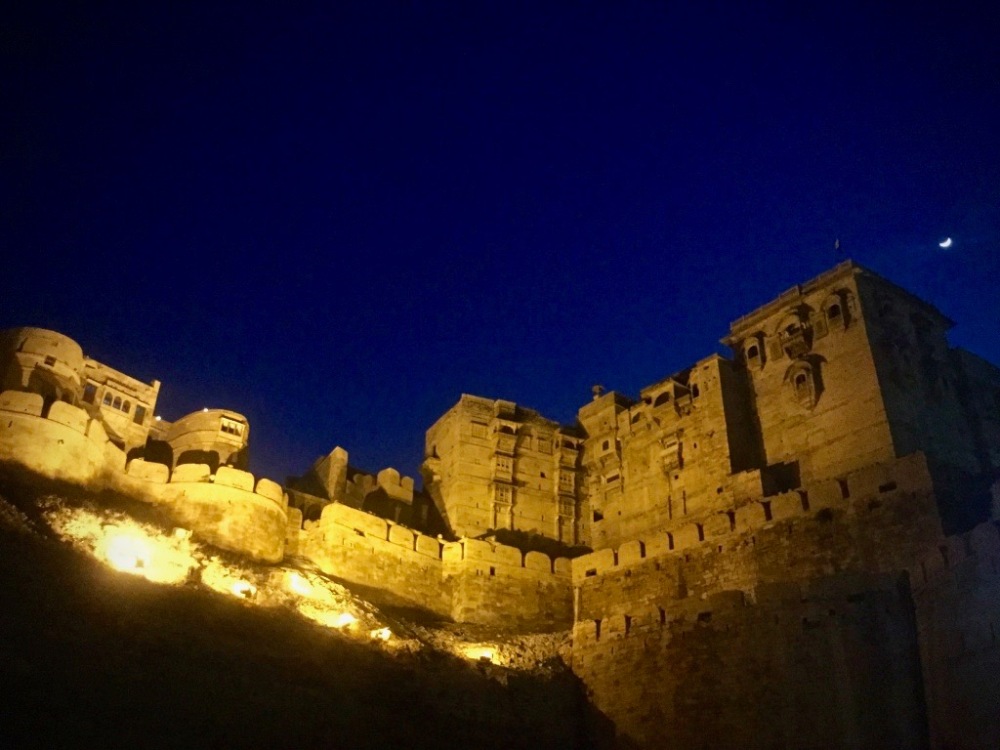 We were on a mission to find pizza and beer and started our search entertained by the decorated rickshaws of the “rickshaw run”. 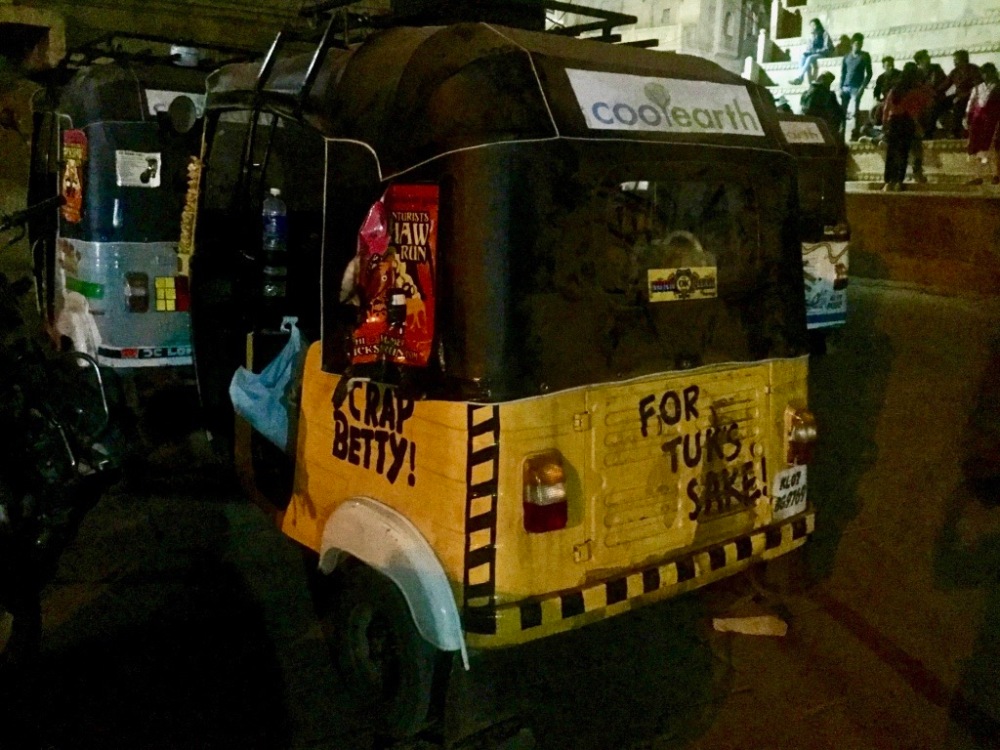 We eventually found what we were looking for at a place called “Ristorante Italiano La Purezza.” There was an incredible rooftop view of the city where we caught a brief firework show in the distance, and listened to the military jet planes fly overhead. Since there was such a large order, it took while to get our food, but it was not a problem. Our waiter, Mohit, kept the beer flowing and was very hospitable. It was a fun night with some of our favorite people, but it was getting late so we had to battle the narrow stairwell back down to ground-level. 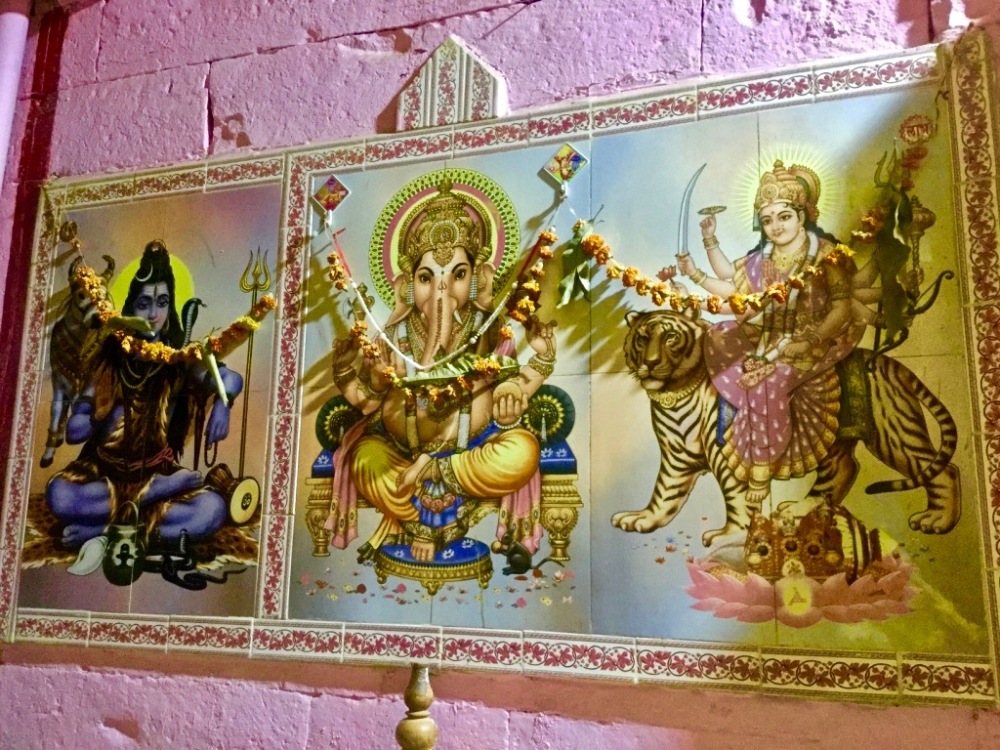 Mohit suggested we visit his relative’s book store nearby, which we did. It was a very nice store and I’m absolutely a lover of books, but unfortunately I had too much to drink to focus on reading, and we were all on a mission to find one more place for a nightcap. 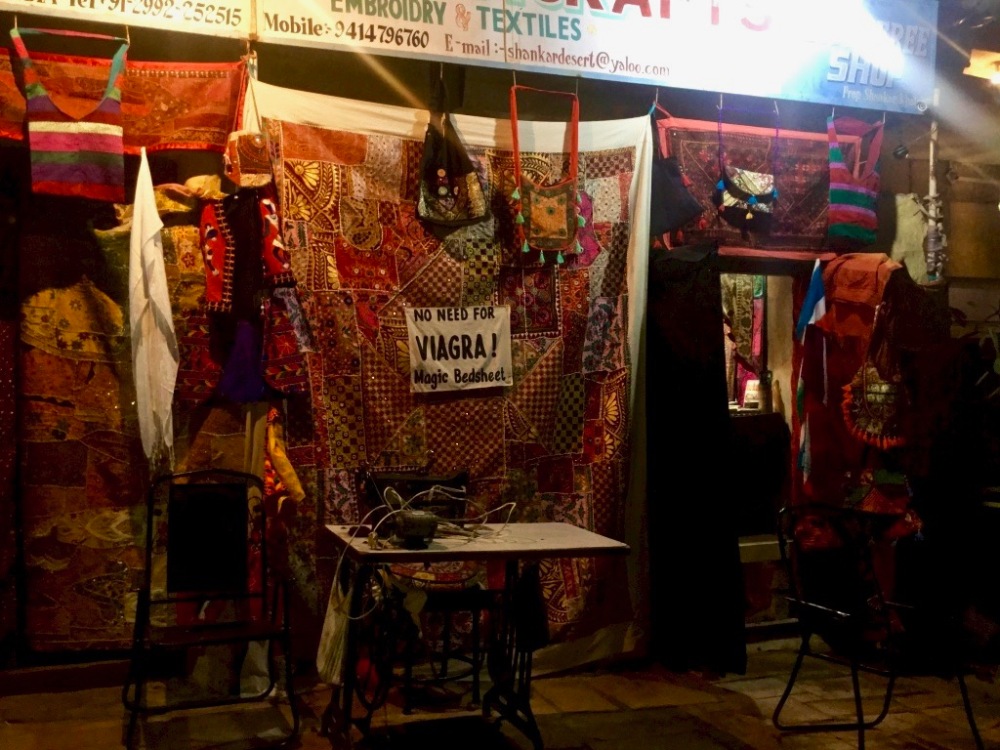 We walked by some very funny marketing at a store displaying blankets. Some of the signs read:

“No need for Viagra, magic bedsheet”

There was also a shirt that read, “Make your boyfriend less ugly”. After a few chuckles, we made our way to the “Kabab Corner Restaurant” for one more round of beers. 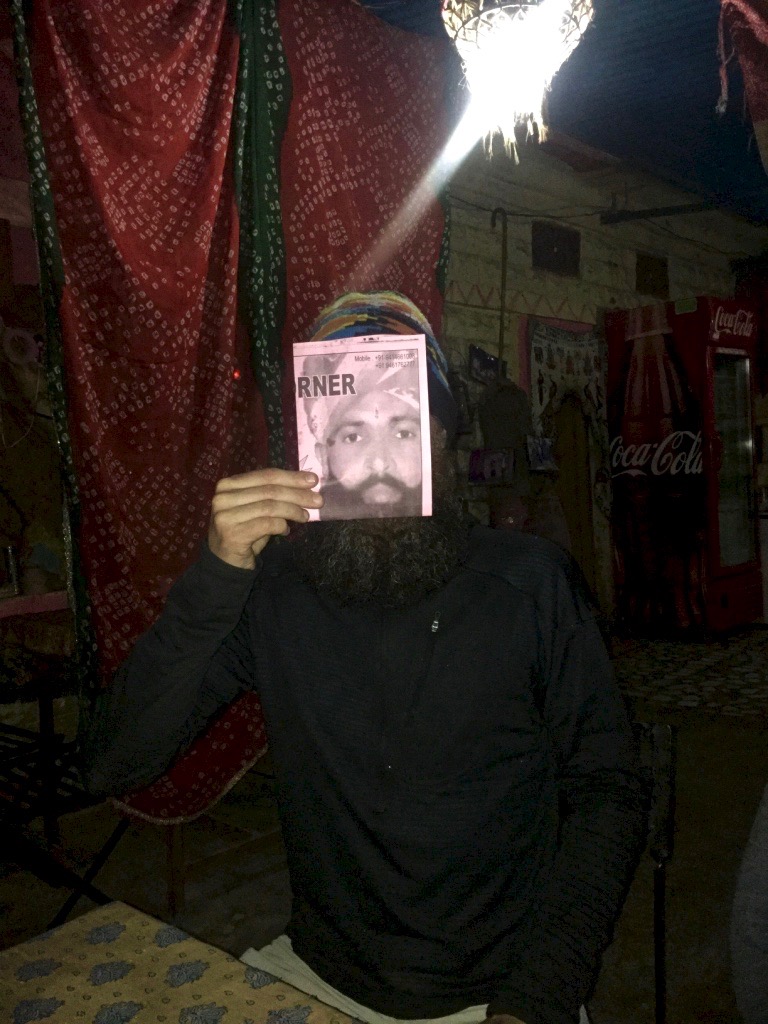 Jump Ahead to Part 21: Ali Baba, Camels & The Box Game