The Cirque of the Towers Route left me speechless. 😶 All the views. ⛰ All the #rainbows . 🌈 All the #lakes . 🏊🏼 The Winds have stolen my heart. 😍
Had a good time in #lander then a horrible time back on trail climbing over the worst blowdown section I’ve ever crossed through. 😖 Our group got separated in the mix. The days that followed would make up for the headache. The Cirque of the Towers Route was amaze balls! 😍
The Basin. Pretty much just vast nothingness, a few pronghorn, and lots of cows. It was mostly dry and hot, although we did experience some thunderstorms. Also, my oxen broke a leg 🐂 and I have died of dysentery on the Oregon Trail.🤠 These things happen. 🤷🏻‍♀️
We hitched back from Encampment and accidentally camped on private property. 😬 Fortunately, the guy wasn’t mad when he found out we were CDT hikers and let us stay. Our views were hazy due to the wildfire smoke. 🔥 We passed through the affected area two days prior! A road walk to Rawlins followed, and we found ourselves herding cattle and dodging cow diarrhea. 🐂 💩 I was relieved to lay in a bed after inhaling some town food. I’ve been battling some nasty sciatic pain and blisters. Hiking through the basin wasn’t going to be too helpful.
One more state complete! Colorado was a blast and it was great to spend the last few days there with fellow AT hikers. Thanks again for the trail magic and the hospitality, @robinurthoughts and @urmygirl_blue You guys rock! Our #tramily has grown from 4 to 8 and we’re ready to take over Wyoming! Hammer down! 🤘
We destroyed some food when we reached Grand Lake. The damage from last year’s wildfires caused us to miss out on the bulk of the Rocky Mountain National Park section, which sucked. We also had to maneuver through many blowdowns, but the views during the climb up and down Parkview Lookout were amazing! The next day, we tackled a 37.4 mile day and made it to Steamboat Springs for the holiday weekend! 💥🇺🇸 🍔 Next stop, the Colorado-Wyoming border! 🤘
Sooo… we had to hike out of Winter Park otherwise we were gonna have to apply for employment. It was time! We weren’t too keen on hiking on top of mountains during a lightning storm, nor were we thrilled about the “impassible” blowdown section ahead. So instead, we connected the road from Berthoud Pass to the Fraser River Trail to the Fraser-Granby Trail. There was a lot of cool art, signage and wildlife along the way.
The climb to #grayspeak #summit was brutal, especially while having some of the worst altitude sickness in my life. 😵‍💫 But I fought off the nausea, gave my legs a pep talk and conquered my second 14er. The views were motivating, and the knifes edge before the final climb was awesome aside from the wind blowing me around like a plastic bag. The icing on the cake was seeing mountain goats during the hike down! ❤️
I was stoked to finally leave the very groomed Colorado Trail section so I could experience some new terrain. We had some big climbs, but we were rewarded with great views!
Posted on January 9, 2019January 11, 2019 by Stubbs

We scoped the room as we ate our free breakfast of eggs, toast and noodles with the other hotel patrons, and we were quick to realize that we were the only Caucasians in the room. Given Thailand’s reputation for being touristy, I took this as a good sign. We booked another night, but would have to switch rooms, so we ditched our luggage in the lobby before exploring Chiang Mai’s Nimman district.

The heat is real in Thailand! That’s saying something when we’re actually in the north where it’s supposed to have cooler temperatures. I was starting to question if 30 was too early for menopause to kick in with all these hot flashes. Otherwise, the Nimman neighborhood was a fun place to be. There were a lot of weird and goofy statues along the sidewalk and the businesses were just beginning to open up for the day. 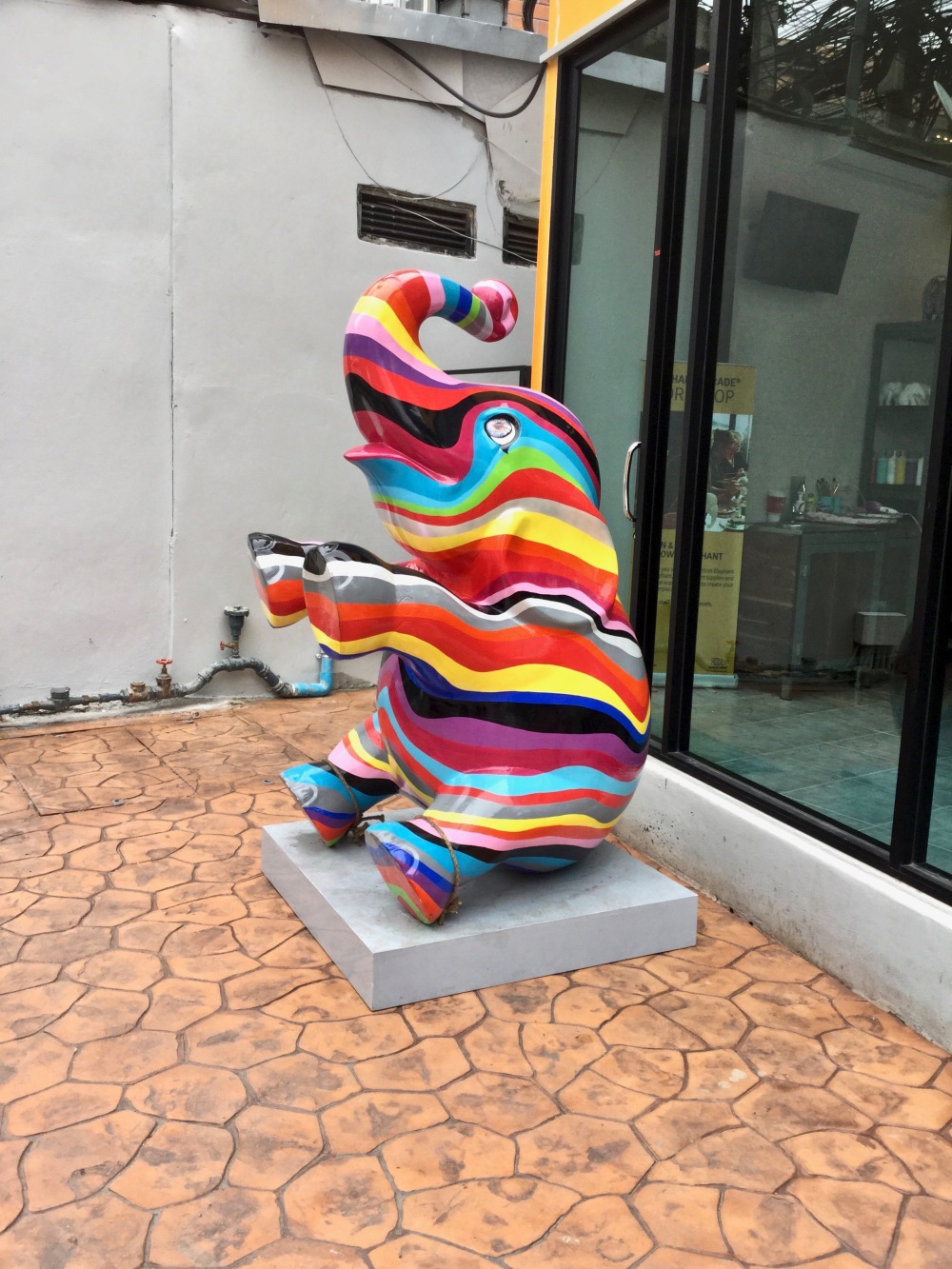 After reading about it in an article on the plane, I was on a mission. I was in search of a cat cafe! I thought I had found one with a giant cat statue out front called the “Lo-Cal Cafe.” It wasn’t a cat cafe, however it had the best damn iced green tea ever! 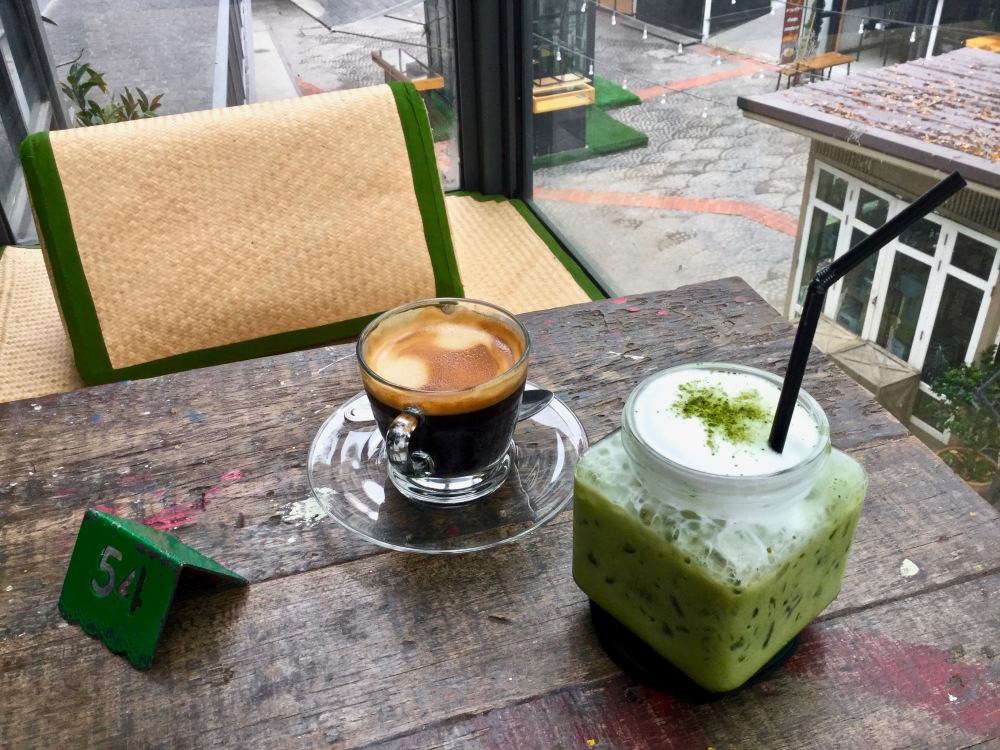 We had some bathroom adventures along the way. The cafe we visited, as well as several other businesses nearby had bathrooms available, but you had to locate it in the smaller building in the back. Also, the toilet paper was located by the sink, instead of in the stalls.

Our arms would slowly get bruised during our trip. We’d notice all throughout Southeast Asia that there were a lot of classic Volkswagen Beetles, or “Punch Buggies,” as I called them growing up. Trevor usually found them first. Lucky me.

Eventually we’d locate the cat cafe, “Catmosphere” and I was overjoyed! Sadly, most of the cats were busy napping during our visit, but it brought a smile to this crazy cat lady’s face nonetheless.

We’d turn around to return to the Nimman neighborhood and we’d end up making another bathroom break. Once again, the game was to locate the restrooms. We wandered around a shopping mall until we found one. When I got there, there wasn’t any toilet paper. I awkwardly asked locals as they walked in and out if they had any, and one lady was kind enough to hand me some from her purse. Thai people are beyond friendly!

There are many temples (or wats) in Thailand, but our first one was called Wat Phrasingh where I’d get schooled by a billboard on Buddha etiquette; for example:

We got our second taste of Thai heat when we grabbed curry at “The Drunken Noodle”. Despite the name, we wouldn’t be drinking any beer as of yet. No alcohol is allowed to be served until 5 pm.

After swapping hotel rooms, and once it was appropriately timed, we’d head back out to get a beer at Kamrai Shop, a beer and wine store where you can purchase your alcohol of choice, then enjoy it on the patio as you people watch. The bars and restaurants were finally opening up for the evening, so we went to “OMG!! 2 Nimman Chiang Mai”. I’d enjoy a Mai Thai as I sang 90’s hits and watched a young waitress evidently pining over some douchebag at the bar.

Finding vegetarian food wasn’t as easy as we expected, but we were stoked to stumble across “The Salad Concept” which had an amazing build-your-own option for salads and wraps. Delicious!

We had been walking around all day, so we decided to get a nightcap at “Year Garage” for more people watching and some modern Thai tunes. So far, Chiang Mai seems like a super livable city.

Jump Back to Part 1: Mumbai to Chiang Mai