Over the past month, we had accumulated just enough stuff to make our packs a little too heavy for comfort, so we decided to dump a few things in a box to mail home. Then we returned to a place I had walked by during last night’s search for vegetarian food, “Cat N’ A Cup”. That’s right! Another cat cafe!

We drank coffee and ate eggs and a waffle as we played with all the cute kitties which were a bit more playful than the ones at the last cafe. I fell in love with a grumpy looking Persian cat that was shy, but friendly. Later that night, they would be one cat short… Just kidding, but the thought of catnapping did cross my mind.

After getting our fill of kitties and food, we returned to the Mekhong Travel Agency where we had received directions from Mr. Somporn Suwannamas when we first arrived in Chiang Rai. We wanted to give him our business for being so helpful. He got us set up for a tour of the White Temple, a waterfall, tea plantation and the hot springs for tomorrow. We took a detour at Wat Jed You before returning to the hostel. 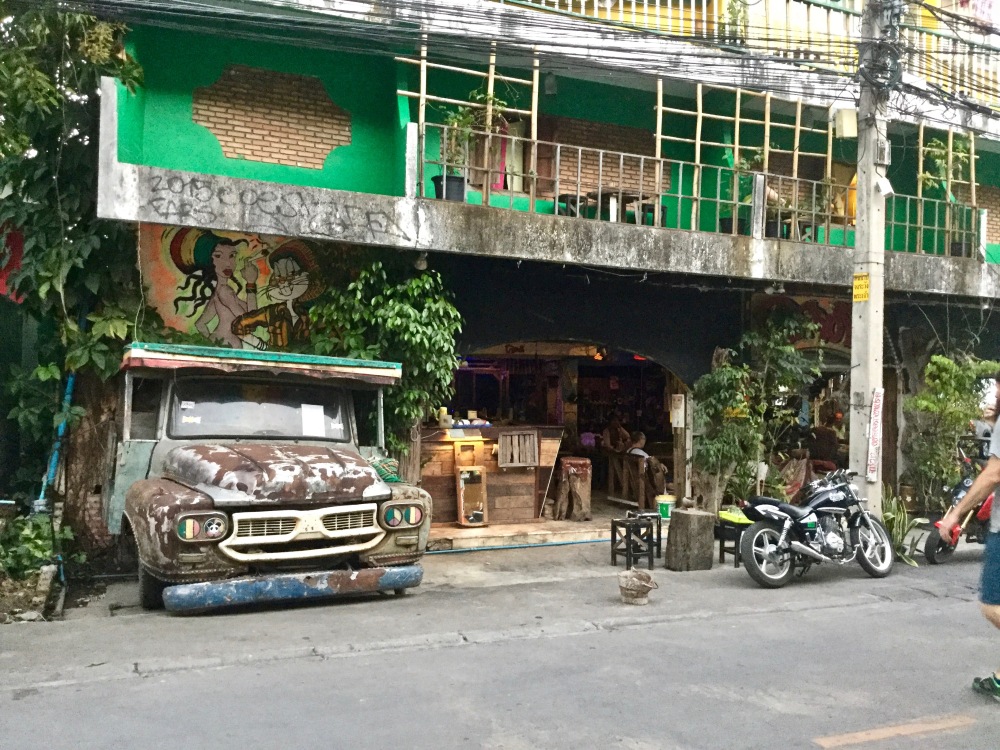 We went back to the hippy joint called “Chook Dee Guest House” to grab lunch since they claimed to have vegetarian food out front. This ended up not being the case. We settled for a couple Leo beers which turned out to be pretty tasty. We’d chat it up with the bartender, a local who went by the name Leon when two other tourists walked in. One of them announced in jest that he felt violated because someone grabbed his penis while walking down the street. I told him some people call that lucky. Leon said he needed to find out what street it was so he could get lucky too. My best guess? It was on Wang Come Road. Yes that exists, we saw it yesterday!

Once again, we gave up on vegetarian food, and decided to try out a local restaurant by an undecipherable name that appeared to have some delicious looking soup. I got the Pork Nam Ngiow soup and Trevor went with the Chicken Khao Soy soup. We felt like we were in spicy food heaven!

After a power nap and some hostel lounging, we’d venture back out to Chook Dee where we’d have a few more beers with Leon and a Canadian girl named Rachel who was doing work for stay. We told them about our travels and our plans of hiking the Appalachian Trail when we returned home. Leon’s mind was blown when he found out that meant we would be hiking for 5-6 months in the woods. He shared with us his days as a temple boy, an experience most Thai boys go through where they shave their heads and eyebrows, and help out around the monastery serving the ordained Monks there. This is done to earn merit, to earn an education, and/or for room and board.

Trevor was feeling a bit carnivorous again, so we returned to “Sanfran Burgers” for dinner. A guy sitting at the table next to us who was eating there with his wife loved the food so much he got himself a second double cheeseburger! If I had the room, I might have taken on the challenge. The food was delicious!

When we returned to the hostel, we were hoping to catch some Z’s. There was really bad music playing at reception and a group of 20-somethings hanging out nearby our bedroom door. I tried drowning out the noise with the TV, which was doing the trick for a while, that was until an Italian girl decided that our doorway was the perfect place to make a phone call at midnight and talk about Laos. “Laos…Laos….Laos….Laos.” I don’t know a lick of Italian, but there’s no question what she was talking about or where she was planning on going. Trevor, who is usually a solid sleeper was getting a little annoyed by it as well, and popped his head out the door to give her the hint. She got it. She took her phone call elsewhere and we were finally able to go to sleep… and dream about Laos.

Jump Back to Part 4: Songthaews, A Musical Clock Tower & Meat