Once we were all checked out of the hostel, we went outside to wait for our minivan driver to pick us up to take us to Kanchanaburi. A very grumpy driver showed up a little after schedule, who was about to get even grumpier since we had to wait for a French girl who stayed at a nearby hostel since she was running late. She was very apologetic when she arrived. She thought that she was supposed to meet out front around 9:30, not 9 am. When we stopped at the next hostel to pick up more passengers, she realized that she was still holding the key to her hotel room. Uncertain what to do, she told the driver. He snagged the key from her hand and said something along the lines of, “Shut up, you talk to much!” I take it he forgot to drink coffee this morning. I also had a sneaking suspicion he wasn’t a fan of Westerners. Just a wild guess.

It had been a very uncomfortable drive crammed into a minivan loaded up to the brim with tourists and luggage. I was very happy to get out. We dropped our packs off at the hostel before wandering around town. It was definitely on the backpacker side of town with many trashy bars that would mostly appeal to 20-something travelers.

We got checked into our room when it was time, and found out that it was only that, a room. It was the tiniest one we stayed at so far with only a bed with a mosquito net and a locker. We’d be sharing a bathroom with everyone else staying at the hostel. Not that it mattered. We weren’t planning on spending too much time at the hostel anyway. A bed was really all we needed.

We ventured back out to locate the bus station which was a 2-mile walk under a unforgiving sun. But hey, we found it! A few things we passed on our way was the venue for the night market, the train station and the POW Cemetery for those that worked on the “Death Railway” to Burma for the Japanese during WWII.

All the walking we had done had us craving some calories, so we found a place to eat an early dinner at, “On’s Thai Isaan Vegetarian Restaurant”. On did cooking classes, and after our meal, I would have loved to learn a few pointers from her if we had had more time. The bottom of her menu said “On’s Food is Never Off!” I love a good play on words.

Trevor ordered the Banana Flower Salad, and has been craving it ever since. I went with an incredibly delicious Jungle Curry. The only regret was ordering something so hot. Hot in temperature, that is. It was boiling when it arrived at our table and I was already a sweaty mess to begin with. I also wished I had noticed the indoor seating beforehand. Hindsight is always 20-20! 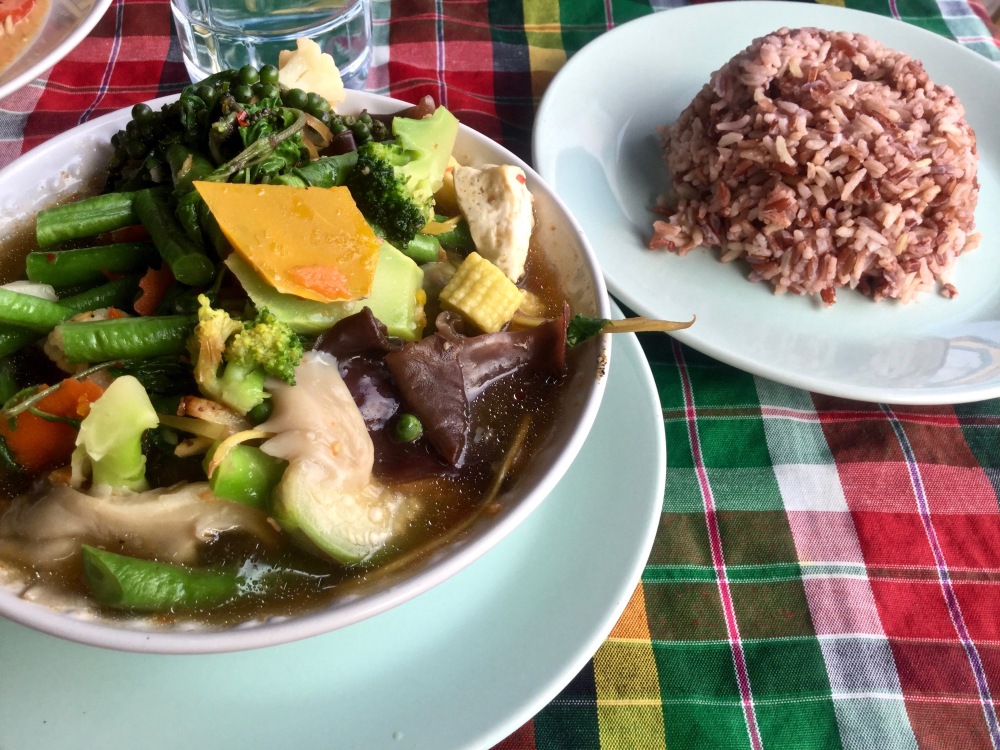 When we were unable to book another night at the hostel, we got online to find a different one, and booked one closer to the bus station. Afterwards, we went out for drinks at a place called “Firefly” for their happy hour special. After catching a buzz, we decided to explore some of the other watering holes nearby and got our next fill at the “Gossy Bar and Restaurant”. After hearing live Eagles songs back to back, Trevor got ahold of the playlist and put on some Rolling Stones. I’d switch it up later in the night to reggae. We had several drinks, played some pool, and socialized with the others before stumbling back to our hostel.

Jump Ahead to Part 12: A National Park & The National Anthem