I did a thing today. Probably won’t do it again. But I also said I wouldn’t run 13.1 miles ever again, sooo… 🤷🏻‍♀️Thanks @trevtrevorwhatever for the support, and super rad to catch up with you @wildturkeytrotsthru Thanks for the hospitality!
9/9/21 - Mission Accomplished! 🤘
Montana! You pretty!
Yet again, Montana brought the hiker friendliness in Augusta, and a sweet sunset too! Once we were able to force ourselves to leave, we were off to “The Bob” and finally got to see the Chinese Wall. We’re officially in the heart of grizzly country, y’all! 🐻
The sweet views continued all the way to Augusta!
Had an awesome birthday which I celebrated with my stinky, freeloading #hikertrash tramily, the wonderful people of Lincoln, and Daryl the Sasquatch. The hike from Rogers Pass was just as amazing as the hike into it after we hunkered down in a yurt to avoid the rain. More climbs, but a lot of ridge walking by rock ledges and towers.
No more smoke, but the days have been windy and the nights have been cold. We visited an amazing outfitter in the middle of the trail, got to see Golden, a familiar face from the AT (2016), and lots and lots of cows! I had been in a bit of a funk lately, but the ridge walk right before reaching Rogers Pass snapped me out of it!
Got stuck in the Butte vortex. We hitched in, hitched out, hiked to the north side then hitched back in. Pizza Ranch was our second home. Eventually we made our way to Helena, our second vortex. Before our arrival, we got pounded by hail and rain. The wind was blasting through the trees so hard, they were snapping like twigs behind us. The people of Helena were beyond hiker friendly. We got stuck a second day when a girl working at the brewery let us crash at her place for free, hot tub included! Life’s good!
The road walk continues. Nevada City to Twin Bridges to Silver Star to Butte! Time for a couple zero days!
Posted on February 24, 2019December 30, 2019 by Stubbs

In the back of my mind, I wondered if the Ecofina section was as bad as they claimed. I really hated missing yet another pretty Florida Trail section. As our road walk progressed, I’d see the severe blow downs by the side of the road that made me realize we made the right decision! 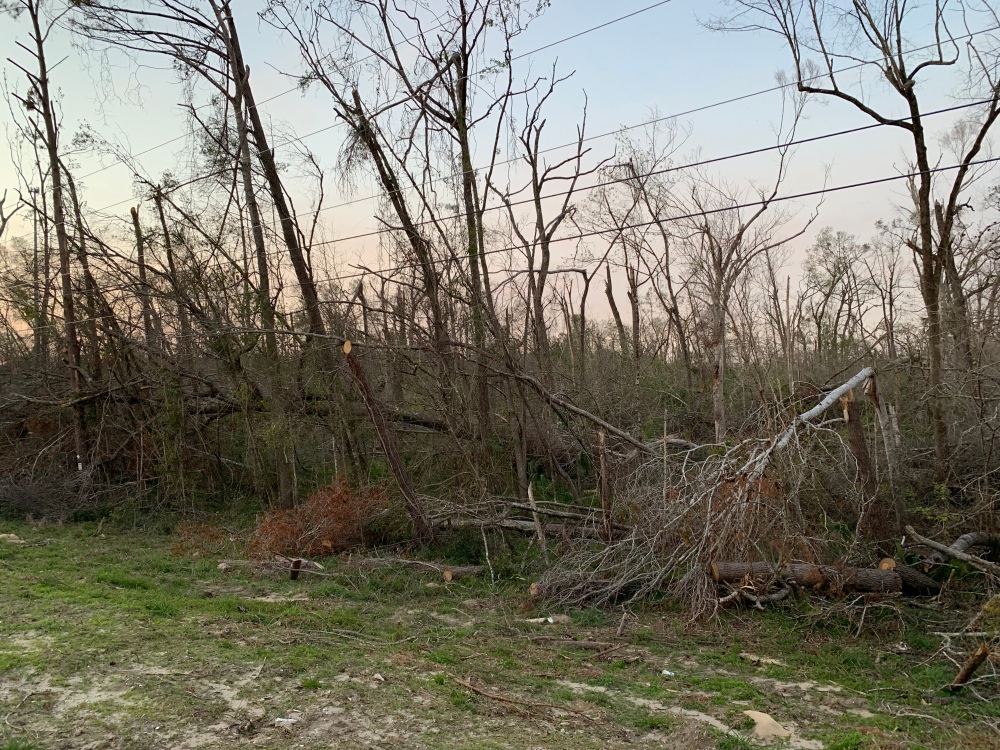 We got to witness a gorgeous sunset at our backs. One last joy before a night of hell! 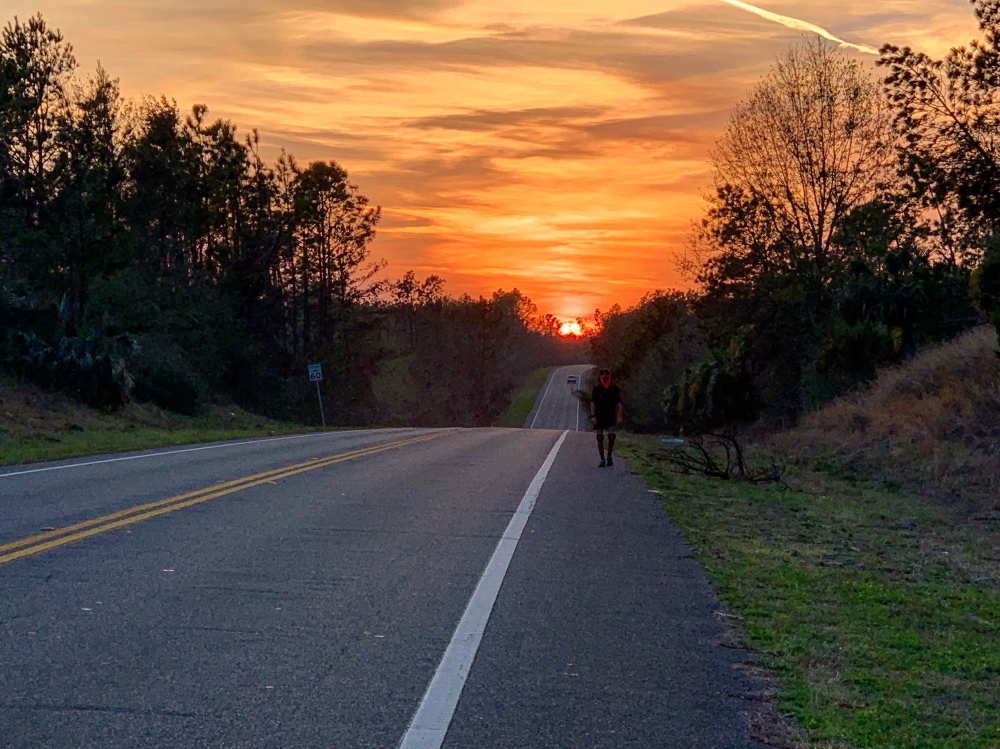 The road walk was long and grueling. There was little shoulder to keep us away from speeding cars. I had my headlamp on so approaching vehicles would hopefully keep a safe distance between us. This seemed to have the opposite results that we wanted. It was Saturday too, so we were concerned about the possibility of drunk drivers on the road.

This all was only partially why this stretch was so miserable. We saw the traffic light of the intersection far in the distance. We were informed that there was a Hardee’s there and anticipated eating a burger when we arrived. It seemed that no matter how long we walked, the traffic light remained equally as far away as before. We felt like we were walking in place. I started to wonder if we were dead and this was our own personal hell in the Twilight Zone. As we approached the top of each hill, I hoped to see Hardee’s glowing ahead like a beacon of hope. With every hill, the traffic light would seem further and further away. We were reaching a state of delirium.

After a very long walk, we’d finally arrive at the intersection and rewarded ourselves with bacon cheeseburgers.

We stuck around until Hardee’s was closing for the night. The gas station it was in would be open all night if we needed a restroom, but now it was time to find a stealth site, and our options were incredibly limited. Not to mention that there were some shady characters around.

Frisbee suggested we tuck under some Forest Service machinery after we found out the awning we initially wanted to lay under was the Sheriff’s office. This seemed like a good spot for a couple hours.

Shortly after settling in, a cop car pulled in the lot and had his headlights pointing directly at us. We thought we were busted for sure. We waited for the cop to get out of his vehicle and call us out. Instead he just sat in his car with his lights blinding us. There was no way that he couldn’t see us. We were completely exposed. Eventually Frisbee decided to walk over there, tell him our scenario and hoped he’d turn a blind eye for a few more hours.

When Frisbee returned, he told me, “Go back to sleep.”

Apparently the cop didn’t even see us. In fact, Frisbee scared the hell out of him! After sharing our predicament, the cop kindly said we could stay there, but that he knew nothing. His secret was safe with us!

You’re probably like, “Liar! You just shared the secret to everyone reading this blog post, ya dingus!” Well more on that later.

We tried to sleep, but then another cop car would appear. This time he filled his gas tank, then backed his car up, facing us. It was a K-9 unit too, so we stressed the possibility of having a dog attack us. He sat there for what felt like an eternity. We tried to stay as still as possible while being attacked by mosquitoes, hoping we wouldn’t alert him of our presence. Eventually he’d leave, but not without shining a spotlight on us upon his exit.

Sketched out, we packed up and headed to the gas station to linger there until Hardee’s opened back up. No sleep for us.

After about an hour, the cop Frisbee spoke to earlier walked in. He went back to our little hiding spot to check on us and noticed we were gone, so he went looking for us. He told us he didn’t inform his partner that we were there until he was called back out. It was like a game of Where’s Waldo, hiker trash edition! Surprisingly, his partner couldn’t find us as he shone the spotlight behind the machinery. Funny! Kind of.

Jump Ahead to The Florida Trail: Chapter 12

Jump Back to The Florida Trail: Chapter 10

One thought on “The Florida Trail: Chapter 11”