After spending a little too long out in the so-called “real world”, it was so damn refreshing to meet up with some of my tribe for a multi-day hike on my home trail. To those CDT tram members who couldn’t make it out, you were truly missed and gossiped about… A LOT! 😂 But I’m hoping some of you cross paths with us on the PCT later this year. Good luck Tapeworm on making it over halfway on the AT. 🔥 Enjoy the north. RIP The Doyle. You will do well I’m certain, but I’ll miss the glorious shitshow you once were. How the trail has changed! 🤯
I did a thing today. Probably won’t do it again. But I also said I wouldn’t run 13.1 miles ever again, sooo… 🤷🏻‍♀️Thanks @trevtrevorwhatever for the support, and super rad to catch up with you @wildturkeytrotsthru Thanks for the hospitality!
9/9/21 - Mission Accomplished! 🤘
Montana! You pretty!
Yet again, Montana brought the hiker friendliness in Augusta, and a sweet sunset too! Once we were able to force ourselves to leave, we were off to “The Bob” and finally got to see the Chinese Wall. We’re officially in the heart of grizzly country, y’all! 🐻
The sweet views continued all the way to Augusta!
Had an awesome birthday which I celebrated with my stinky, freeloading #hikertrash tramily, the wonderful people of Lincoln, and Daryl the Sasquatch. The hike from Rogers Pass was just as amazing as the hike into it after we hunkered down in a yurt to avoid the rain. More climbs, but a lot of ridge walking by rock ledges and towers.
No more smoke, but the days have been windy and the nights have been cold. We visited an amazing outfitter in the middle of the trail, got to see Golden, a familiar face from the AT (2016), and lots and lots of cows! I had been in a bit of a funk lately, but the ridge walk right before reaching Rogers Pass snapped me out of it!
Got stuck in the Butte vortex. We hitched in, hitched out, hiked to the north side then hitched back in. Pizza Ranch was our second home. Eventually we made our way to Helena, our second vortex. Before our arrival, we got pounded by hail and rain. The wind was blasting through the trees so hard, they were snapping like twigs behind us. The people of Helena were beyond hiker friendly. We got stuck a second day when a girl working at the brewery let us crash at her place for free, hot tub included! Life’s good!
Posted on February 28, 2019December 30, 2019 by Stubbs

We slept well in the Hillcrest Baptist Church shelter during the rain, and Wilton was there to greet us in the morning with sausages! We talked to him and his brother more about the aftermath of Hurricane Michael and the challenges those faced who lost their homes in the disaster. We were absolutely saddened that there wasn’t more coverage on it up north. It seemed insurance companies were taking advantage per usual, relief efforts were only provided for some, and all those affected had been long forgotten by the rest of the country. I suppose it’s the tragic reality of most natural disasters. 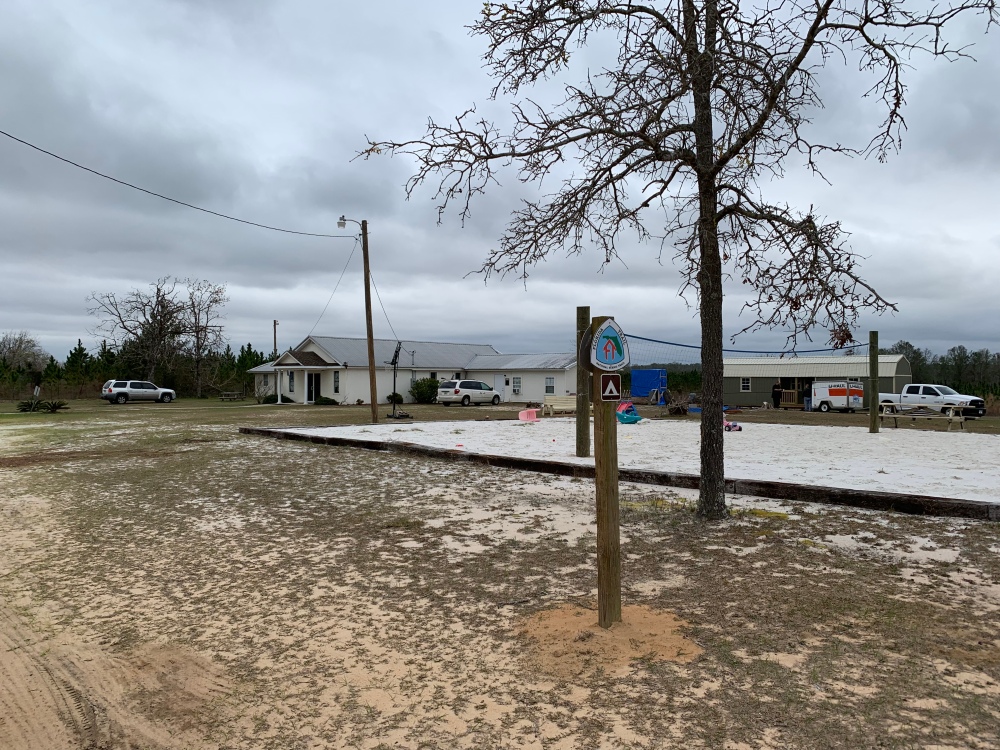 It took a lot of motivation to get our butts back to hiking. The people of the church had been beyond hospitable! Also, all the road walking had left my feet badly blistered, so I was less than thrilled to put pressure on them again.

I’d be more than happy to take a break by the Altha trailhead, which ended up being closed off. Which meant, you guessed it! More road walking!

As we had been warned, the destruction left by the hurricane became more and more evident as we proceeded to Chipola. The pictures I captured hardly does it justice.

When we got closer to Blountstown, we noticed more repairs and clean up. I was under the impression that that was the dividing point between the less fortunate and the well off.

We reached the bike trail that guided us into town, and were greeted by some adorable pups!

The motel we originally planned on crashing at looked more like an opium den with some shady people lurking around. So we headed to McDonalds to eat and regroup. When you’re exhausted, sometimes you make poor decisions. In this case, I’m referring to paying an astronomical amount of money for a roach motel.

Don’t get me wrong, I’ve stayed in many budget motels on the Appalachian Trail, and this one was no different. Had the price been lower, you would’ve heard no complaints, but this guy was taking advantage of people. It was kinda nice to shower and do some laundry in the tub, just not for $95!

If you’d like to help the victims of the aftermath of Hurricane Michael, please donate to the American Red Cross.

Jump Ahead to The Florida Trail: Chapter 14

Jump Back to The Florida Trail: Chapter 12