April 10th. Me. Frisbee. Hiking. Mexico to Canada. Continental Divide Trail. 3,100 miles. It’s go time. Hammer down. 🤘
The fun wasn’t over after thru hiking the BMT. I met up with some more of my favorite people at Amicalola Falls to hike a section of the AT. It was an awesome #hikertrash tramily reunion. I’ve missed these fools! The weather wasn’t so desirable, but we managed to dodge the worst of it by hiding out in Blairsville where we ate copious amounts of food. We made it to Franklin and got to pay it forward by providing trail magic. I think I enjoy providing trail magic more than receiving it, and that’s saying A LOT! This gal loves to eat! Up next... New Mexico!!!
March 26th 2021 - BMT complete! All we had was a short hike to Ironbridge Cafe for breakfast and coffee. Frisbee and I were stoked that Dr. Thunder showed up. He came in clutch shuttling us from Skeenah Gap to Blairsville to dodge the upcoming storm. Our zero day paid off and we had sunshine the entire 25 miles to the finish line!
We picked up “Grandpa” and hiked a pretty stretch of trail to a sweet campsite. Frisbee and I had our “unofficial” finish once we reached the Pinhoti Trail junction. Then we spent the night in a cemetery and Middle Brother nearly got shot by the hunter he startled the next morning. After a road walk, we slept at Indian Rock Shelter so we could get an early hitch into Blue Ridge to destroy McDonald’s. Most of us were out of food.
After an awesome visit to Reliance Fly and Tackle for coffee and food, we got to explore the rest of Reliance during our road walk. We picked up resupply and Grandpa at Ducktown the next day and enjoyed the sunshine... finally!
We escaped the rain by hiding in Ducktown, but the aftermath was flooded trail and a dangerous ford. We all made it across safely, including Lucy Lulu (a NOBO hiker we met at the crossing). It was still a pretty section and it included random goats and a lot of snakes. (Some video/photo credits: @trevtrevorwhatever @middlebrothersworld )
We timed it perfectly walking into Tapoco Tavern on opening day! The rain also waited to unleash until we found cover. We ate well then slept in a gazebo for the night. The next couple days were brutal. I busted my ass on the slick trail, twice! 😑The climbs were rough, the humidity was high, and the fog was thick. After fording a few creeks, my feet were battered. Time for a zero day!
We were wrapping up the Smokies and the
Our hike through the #GreatSmokyMountains has been awesome! Aside from the natural, the #bmt had taken us to some #historic sites and #ruins. We explored the Calhoun House built in 1928, foundation ruins and a old #car graveyard.
Posted on March 12, 2019December 30, 2019 by Stubbs

The roosters started crowing around 4 am and the first tractor trailer pulled in an hour later. We got up shortly after that. The owners had coffee brewed and were cooking up sausages on the griddle. JR and Irma were very hospitable! They checked the weather for us on TV and it called for rain.

JR said, “You guys are in luck!” Irma replied, “What do you mean? It’s going to rain.” JR responded, “They’re going to get a free shower today!”

After we ate, we sipped our coffee, chatted with the locals as they passed through and played with their adorable golden retriever, Roxy.

One of their employees named Donna gave us our second serving of sausage dogs to go and we filled our water bottles. Then it was time to hike!

We took the road passed an abandoned dolomite mine and quarry ponds before entering the Aucilla Wildlife Management Area. 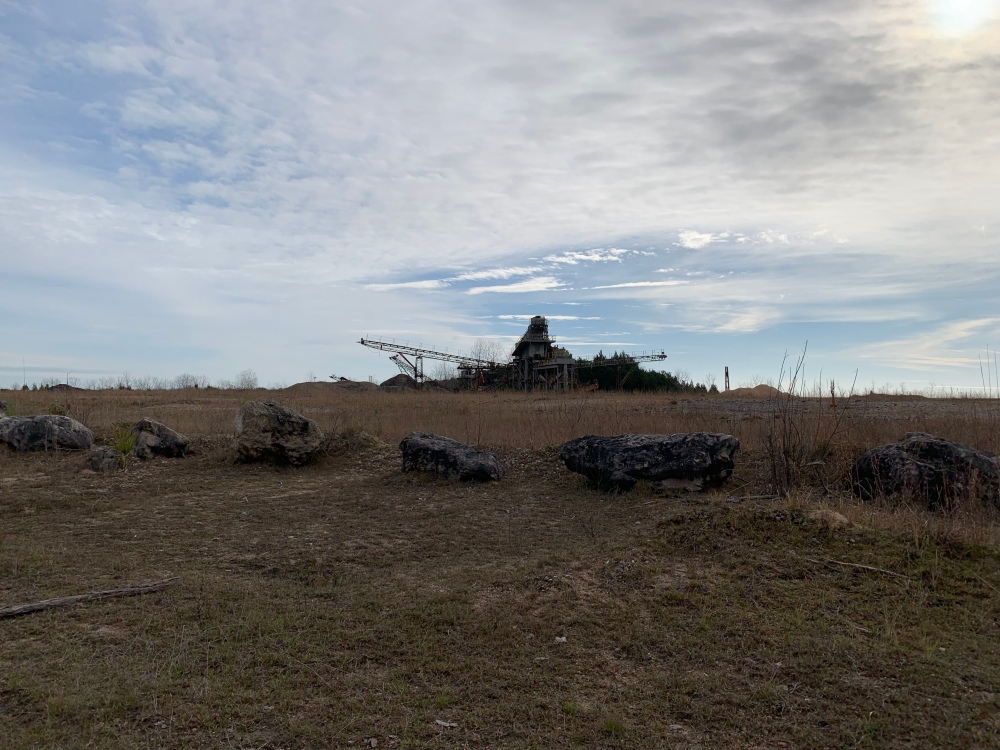 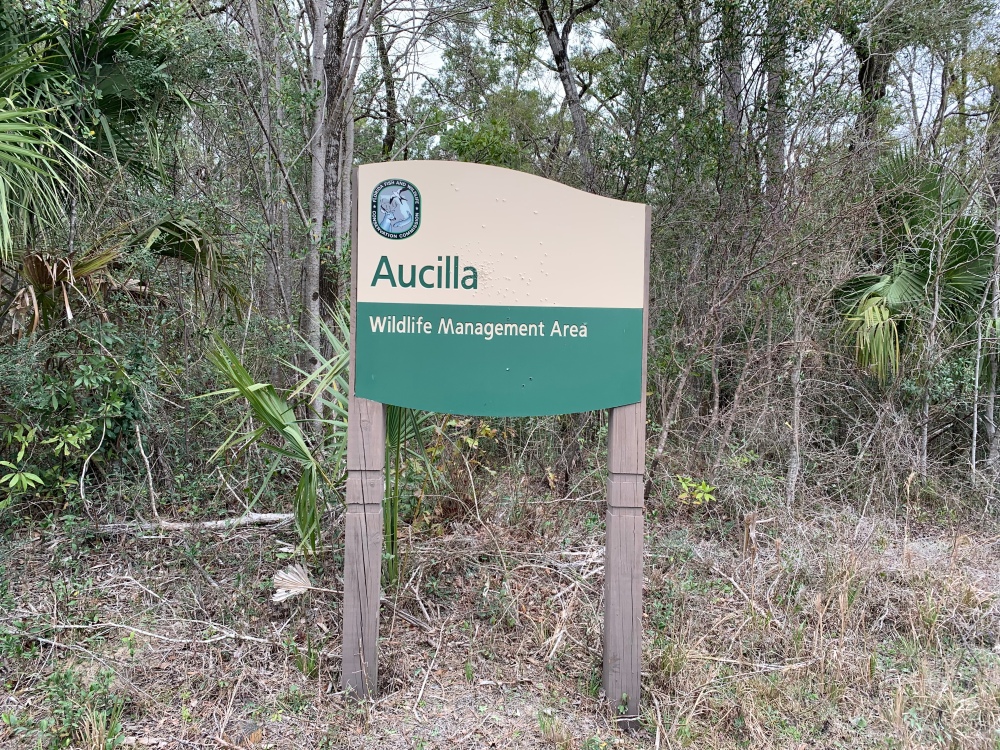 This section was beautiful with a curvy trail traveling back and forth over the Aucilla River. We didn’t even have to get our feet wet! The river would be exposed through scenic limestone sink holes and would travel underground beneath us. 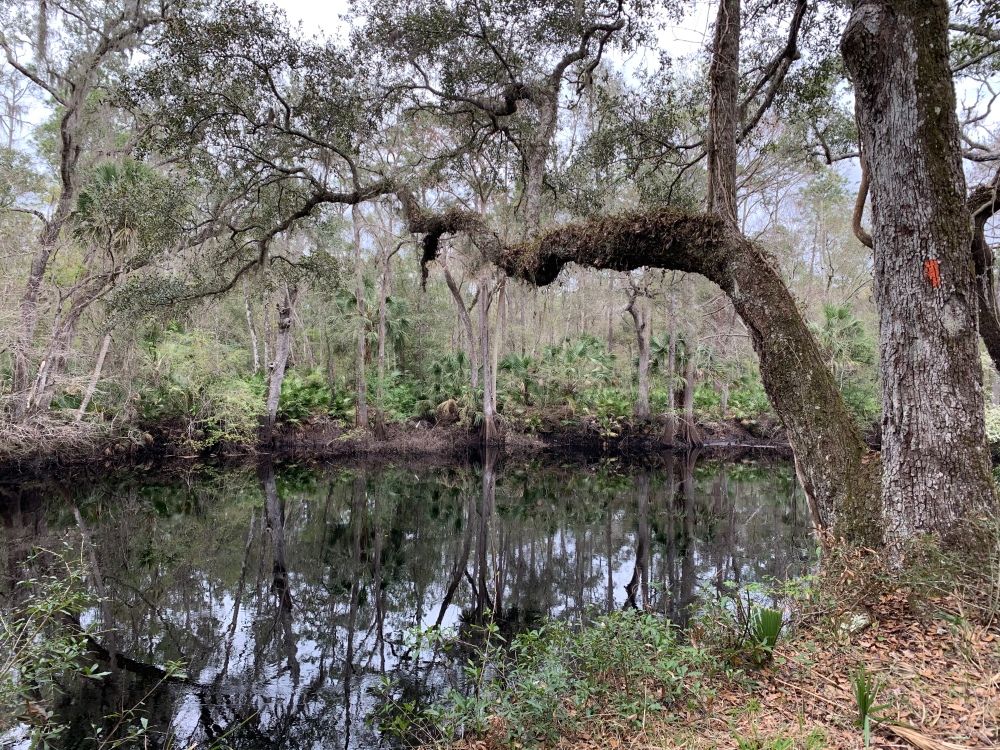 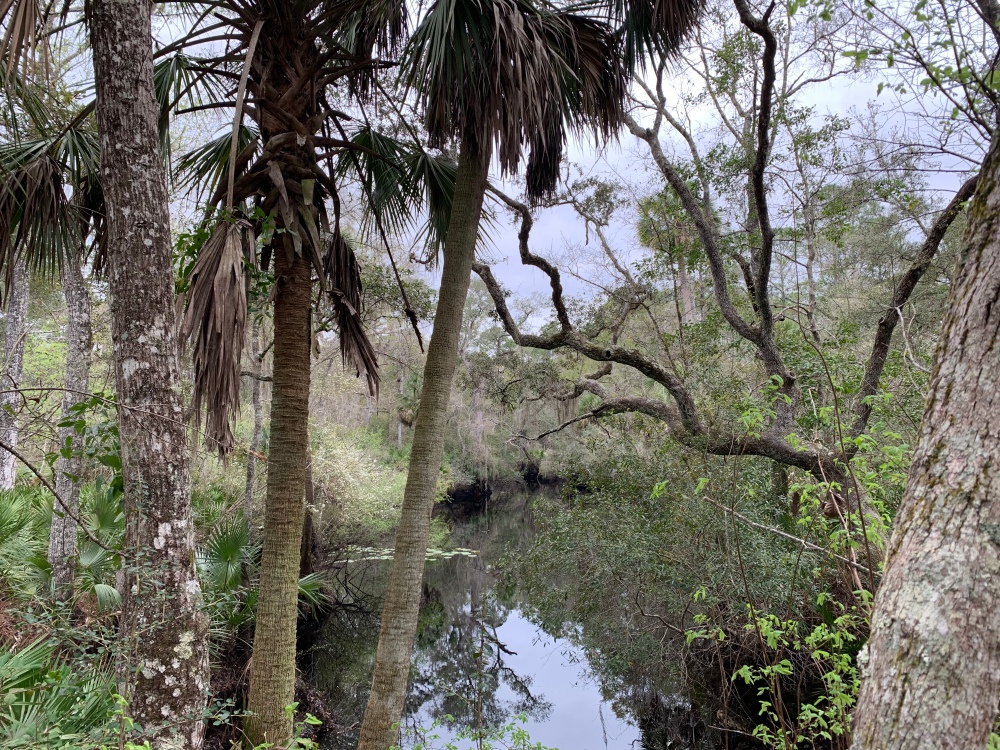 It was supposed to start raining soon, so we took an early lunch at Goose Pasture Road. It started drizzling, but fortunately there was a kiosk with an awning to hide under until we were done eating.

Right before we hit the trail, we met two NOBOs, Treehouse and Redbeard. As always, we swapped information regarding what lies ahead and suggestions where to sleep. A local who was following around Mayor and his dog, whom we met yesterday, stopped to chat with the four of us before we all parted ways.

Into the rain we went! We saw “The Vortex”, a river sink where the river flows underground. There was a large amount of trash and debris that floated downriver and got stuck here.

We would have enjoyed the scenery walking along the river more had it not been raining.

After several miles, we were back on the road, which wasn’t much of a road at all, but rather a flat stretch of mud.

We were glad when the muddy forest road turned into pavement, but it was a long miserable walk down residential streets before we approached Mount Gilead Baptist Church. 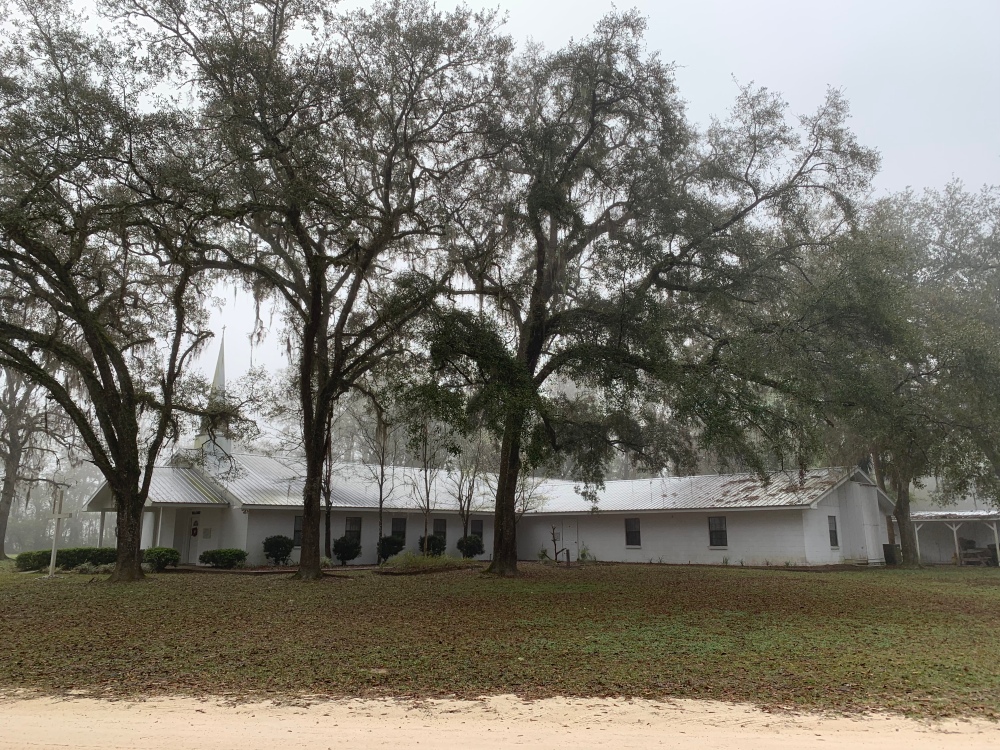 Funny enough, the rain stopped and a rainbow led us the way there, just as it had when we arrived at the Hillcrest Baptist Church. This would be another good omen.

As soon as we reached the parking lot, a truck pulled in. We waved and walked up to the vehicle, assuming it was the pastor. We read that they have an evening service on Wednesdays and we were about to ask if it would be okay to set up our tent, or at the very least, utilize their picnic tables to eat something where it was dry, when the lady in the passenger seat asked if we’d like to join them for dinner! Uh, yeah! You betcha!

She was the pastor’s wife and her name was Dawn and was riding along with Pastor Jerry to prepare for the evening service. They gathered together to eat dinner before their service and were so kind to invite us in to join them. Everyone there was incredibly nice and welcoming. We ate well too! They had salad, mustard greens, Shepherd’s Pie, Mac and Cheese, dinner rolls, ice cream and coffee!

We joined them for the service afterwards. As I’ve mentioned before, I’m not a religious gal, but Pastor Jerry kept the sermon entertaining. In short, the message was a reminder to spread the good word, but to keep in mind that we are not the ones who get to make the final judgement and shouldn’t act as such. I don’t full heartedly share the same views with the Southern Baptist Church, but I can say one thing for certain. The majority of folks in the Baptist churches that I’ve met along my hikes are incredibly hospitable towards hikers!

We also didn’t have to worry about where we would be sleeping for the night. They gave us permission to set up our tent on the property. Thanks ya’ll!

Jump Ahead to The Florida Trail: Chapter 23

Jump Back to The Florida Trail: Chapter 21