Hung out with the creatures of the night just before touching Waterton, then tripped out over the #pacificnorthwesttrail all the way to Chief Mountain. That about sums up the end of the #cdt2021 Now it’s time to finally knab that 👑 👑 👑 on the #pct2022 Hammer down!
Round 2 of wild and epic #glaciernationalpark It started to get smoky near the end, but this place was still stunning. 🤩
It’s that time of year! Hiking season is about to begin, and I just realized I never posted any pictures of #glaciernationalpark from last year’s trek. Here’s round one of one of my favorite places. Glacier got #grizzlybear, bighorns, swamp donkeys, and views for days! 😍
After spending a little too long out in the so-called “real world”, it was so damn refreshing to meet up with some of my tribe for a multi-day hike on my home trail. To those CDT tram members who couldn’t make it out, you were truly missed and gossiped about… A LOT! 😂 But I’m hoping some of you cross paths with us on the PCT later this year. Good luck Tapeworm on making it over halfway on the AT. 🔥 Enjoy the north. RIP The Doyle. You will do well I’m certain, but I’ll miss the glorious shitshow you once were. How the trail has changed! 🤯
I did a thing today. Probably won’t do it again. But I also said I wouldn’t run 13.1 miles ever again, sooo… 🤷🏻‍♀️Thanks @trevtrevorwhatever for the support, and super rad to catch up with you @wildturkeytrotsthru Thanks for the hospitality!
9/9/21 - Mission Accomplished! 🤘
Montana! You pretty!
Yet again, Montana brought the hiker friendliness in Augusta, and a sweet sunset too! Once we were able to force ourselves to leave, we were off to “The Bob” and finally got to see the Chinese Wall. We’re officially in the heart of grizzly country, y’all! 🐻
The sweet views continued all the way to Augusta!
Posted on March 24, 2019December 31, 2019 by Stubbs

I heard some strange noises overnight. Nothing that had me too concerned, however I had no clue what could be making such unearthly sounds. Was it an alligator? Maybe a opossum? I’ll never know. My search on YouTube later on in town would leave me still wondering. 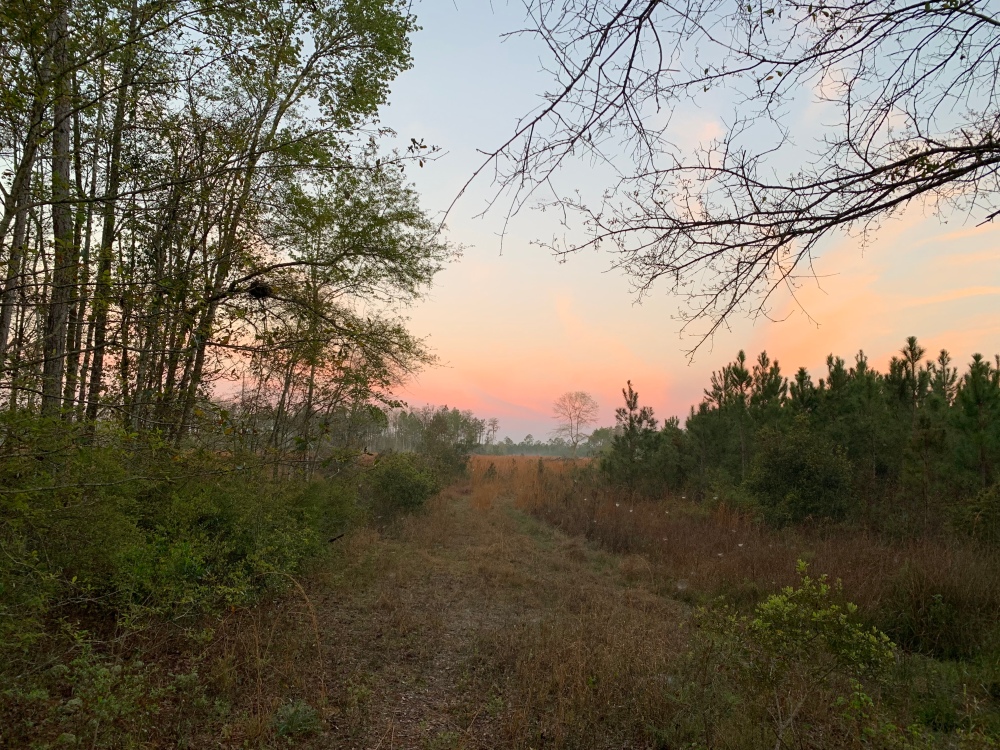 After crossing the old bridge, we’d enter a boggy, muddy mess, far from the warmth of the sun.

The trail would be lumpy and unmaintained, making it impossible to keep a steady stride. It seems this section of trail has been heavily neglected. I’d get waist deep in water before we got in touch with City Hall in Lake Butler, getting approval to camp once we arrived. That would be the only good that would come out of our morning. 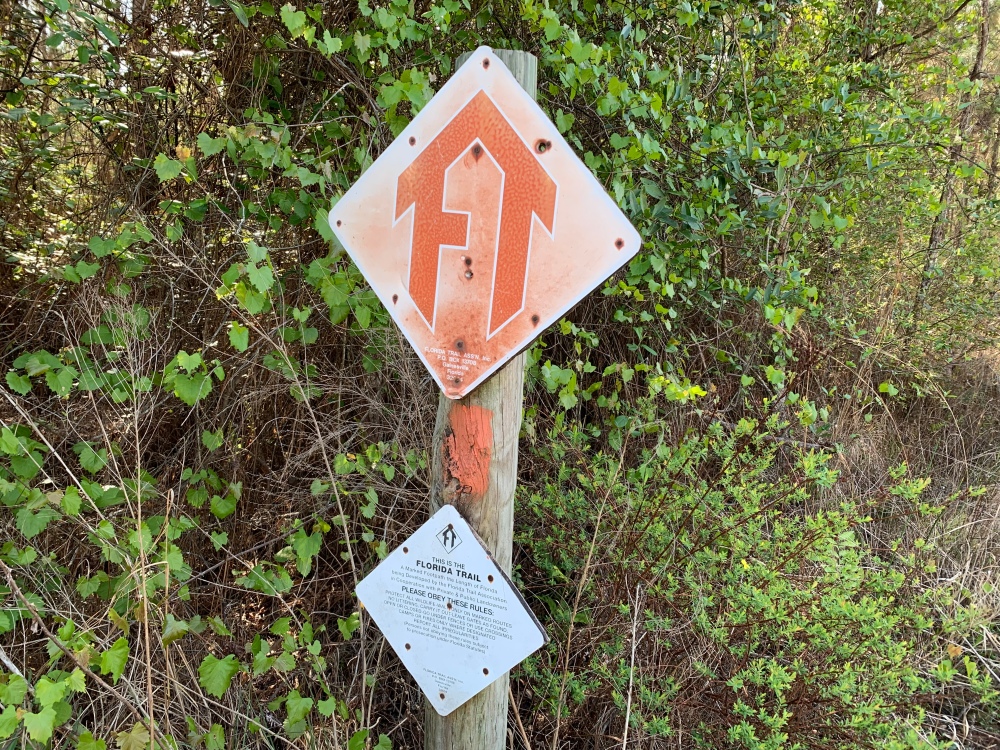 The following section of trail would continue to be uneven, making me fearful that I might roll my ankle. Then we’d find ourselves on the same terrain, except knee deep in water. This was probably the most mentally draining section of the whole Florida Trail for me thus far. Surprisingly more than the infamous Bradwell Bay. I was so discouraged, I wanted to cry.

I felt beat up, frustrated, but also relieved by the time we reached the road. We dumped the sediment out from our shoes. Frisbee would accidentally do so near a mound of fire ants. Lucky for him, there was a puddle he could dunk his foot into, removing them and the burning sensation from their stings.

We had some road walking ahead of us down the highway before it led us into the town of Lake Butler. We walked by a lot of farmland, and residential housing that varied from mansions to run-down shacks. We’d also meet a NOBO named Carolina Kringle. He wouldn’t be finishing his thru hike due to a stress fracture in his foot. I could relate. Stress fractures mixed with thru hikes are a combination I’m all too familiar with!

He had hiked the section between Big Cypress and Key West which was an extension we were planning to do when we returned in the winter. He offered to throw us some tips and suggested stealth sites our way when we got back on trail, and we exchanged contacts before going our separate ways. Thanks dude! 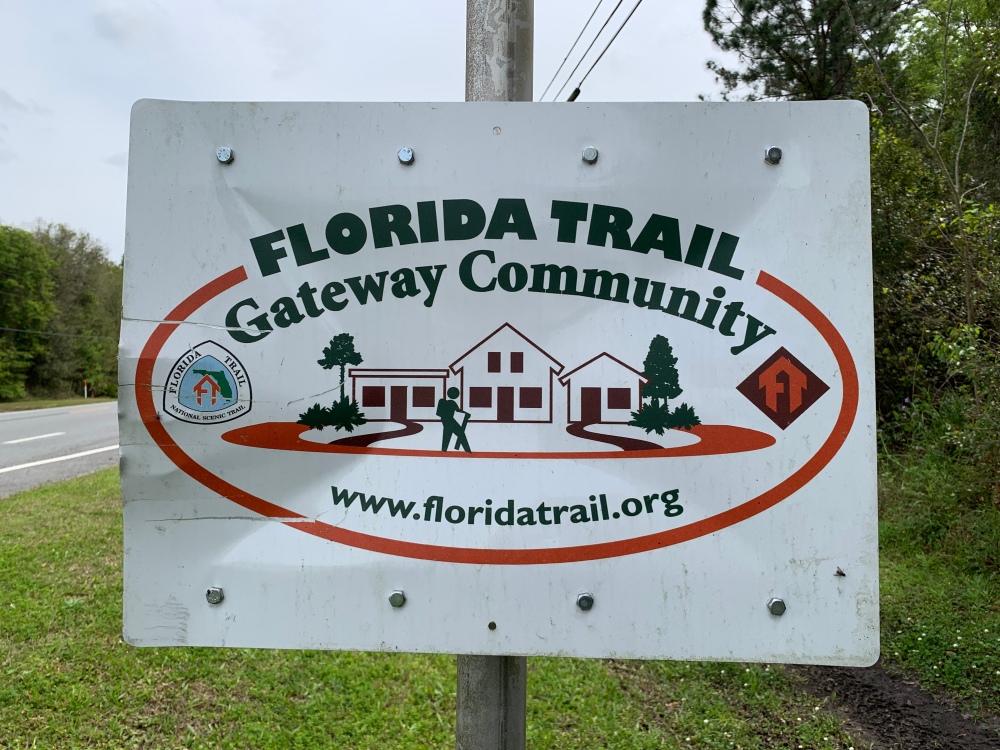 As soon as we entered Lake Butler, we were on the search for food! We were told a very good Mexican restaurant was in town, so we tracked it down. Laredo Mexican Restaurant did not disappoint!

One of the members of our 2017 AT trail family, Gumby, would be joining us shortly after we inhaled our meal. He lived a short distance away in Jacksonville. We checked out the lake, and ate a pint of ice cream each before running back into Double Check out front of City Hall.

We said goodbye to Gumby who had to work at 1 am the following morning, and since we had gotten ‘the okay’ to camp in town, we got ourselves set up between City Hall and The Depot. This was all done while approximately 12 stray cats watched us from the woods.

We were soaking up the WiFi out front of City Hall when a guy who I can best describe as a black Jack Sparrow mixed with a cowboy rolled up on a bicycle and started chatting with Double Check. He was a local named Mike who happened to have a key to unlock the bathrooms connected to The Depot. After a few laughs, we thanked him and he rolled away to join the rest of town to celebrate the weekend.

The nearby nightclub called “The FullHouse Lounge” was bumping all night starting with hip hop music in the early evening, and closing out the night with a live classic rock cover band. There was also a small group of people mingling at a nearby picnic table, and diesel trucks flew up and down the street at all hours of the night. I didn’t mind the noise so long as we weren’t confronted with any drunk and problematic locals. This fortunately never became an issue.

Jump Ahead to The Florida Trail: Chapter 32

Jump Back to The Florida Trail: Chapter 30