After eating the mediocre, but free hostel breakfast, I walked out front to grab my  laundry off the line. A hostel employee peered at me suspiciously as if I were stealing other people’s clothes. I couldn’t blame him; I’m sure that sort of thing has happened in the past.

The same guy who drove us to the Vietnam Embassy yesterday was taking us to tour the Choeung Ek Genocide Center, one of over 500 killing fields that were in use during the Khmer Rouge. His brakes squealed and squeaked loudly as we made our way to the entrance where we grabbed our tickets and audio tour guides before exploring the grounds. If you’re sensitive to matters of mass death and execution, I would not recommend reading any further. 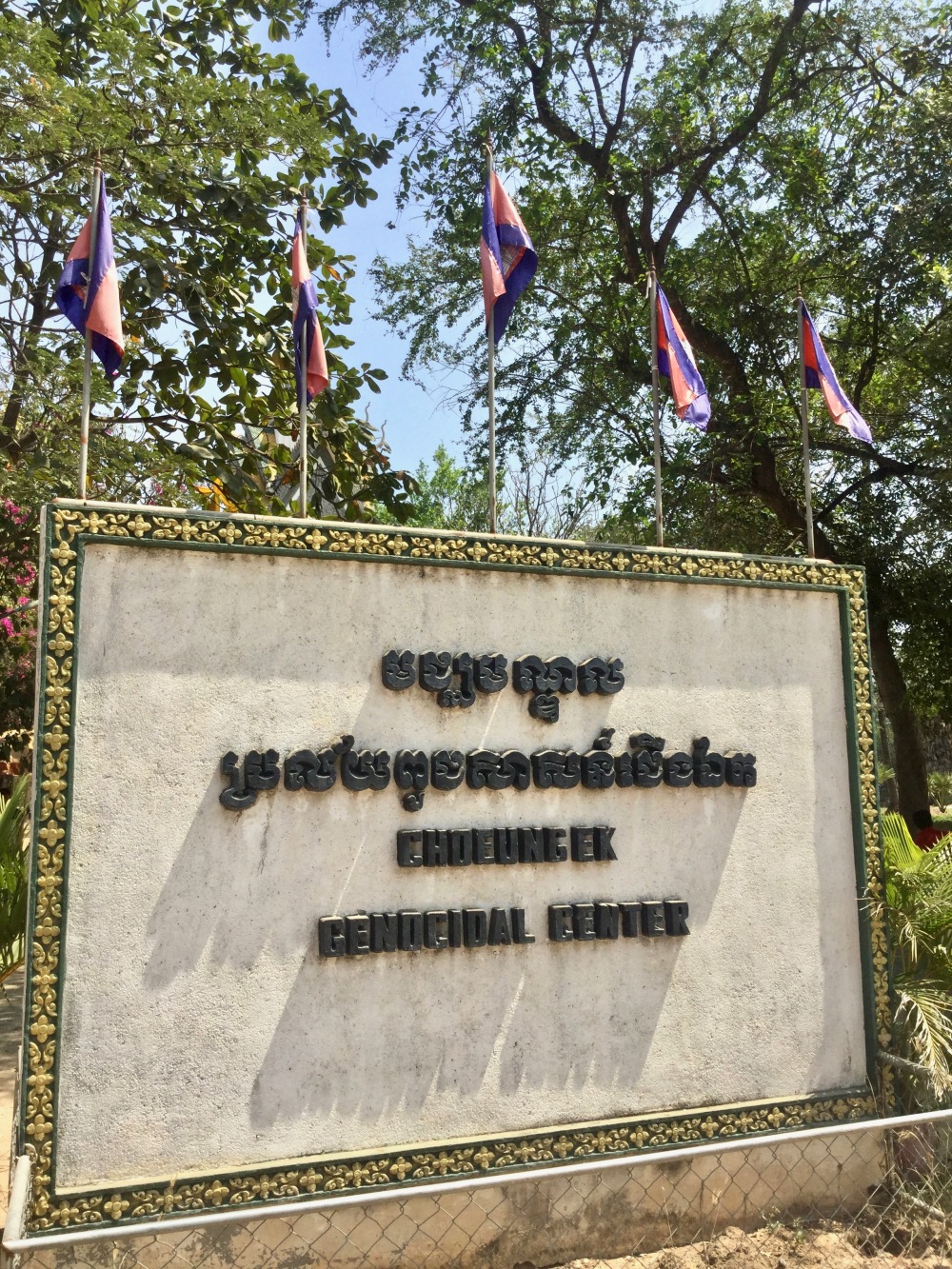 Since most of the buildings were no longer standing, the first few stops only had placards marking the locations described in the audio guides.

The first stop was where trucks would arrive with 20-30 blindfolded prisoners, 2-3 times monthly to every 3 weeks. Depending on their abilities, they were either led to the prison or sent to the killing fields to be executed upon arrival. There were over 300 executions a day.

Some prisoners were transported to the next stop, the detention center, where they were detained for a later execution. Next door was the executioner’s office. Nearby was the site of the chemical substance storage room where DDT, an insecticide, was kept for the purpose of ridding the odors of the corpses and to accelerate death to those buried alive.

Some of the victims of the Khmer Rouge had their throats slit using the broken limbs of palm trees. Next to this placard was a palm to demonstrate how sharp and serrated the limbs were. Next was a storage room for additional tools for death and detainment. What was kept inside were shackles, leg irons, hatchets, knives, hoes, shovels, cleaning rods, wooden sticks, and just about anything else that could cause blunt trauma. Guns were rarely used since they wanted to conserve bullets, and didn’t want to alarm the prisoners. 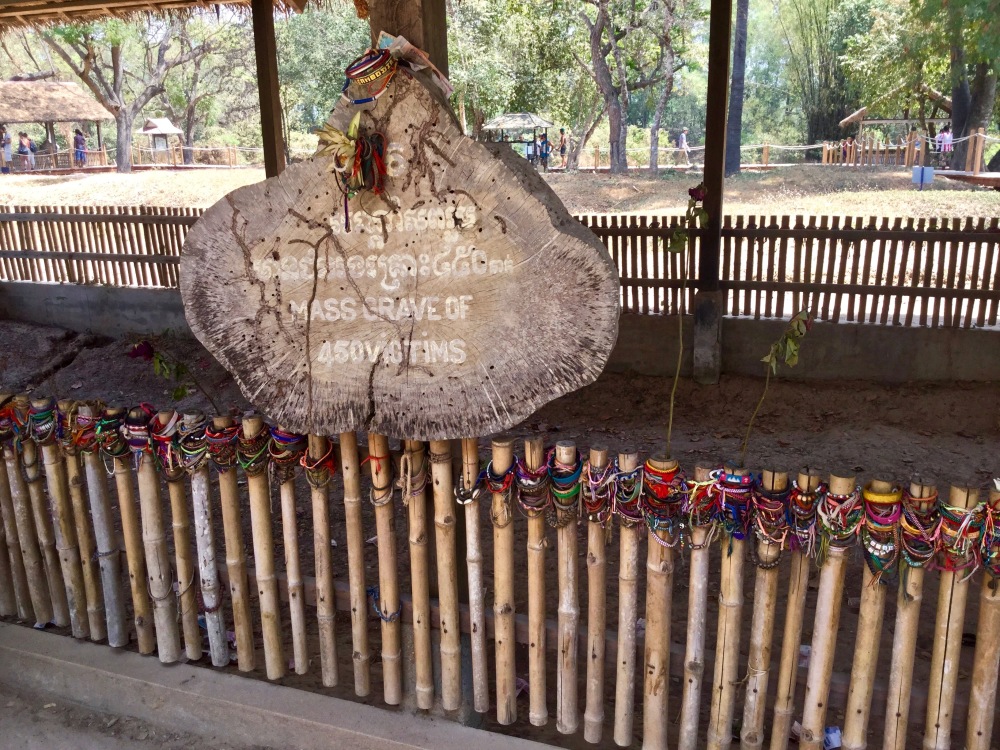 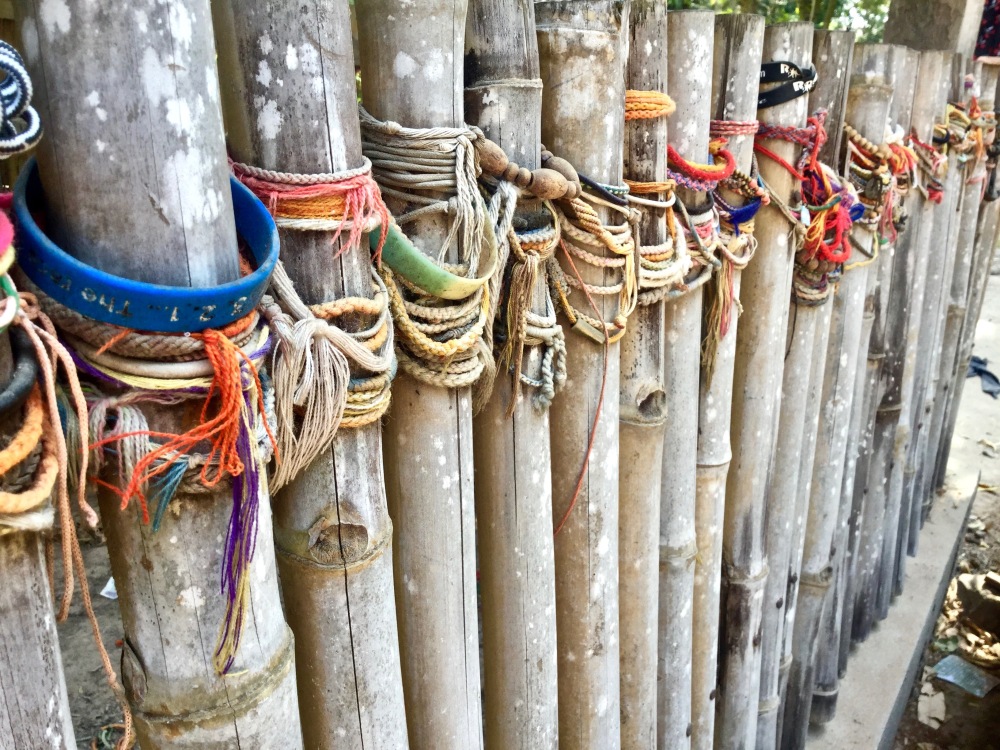 Mass graves were marked on the property, as well as the “killing tree,” which infants were thrown against for fear that they would grow up and retaliate. 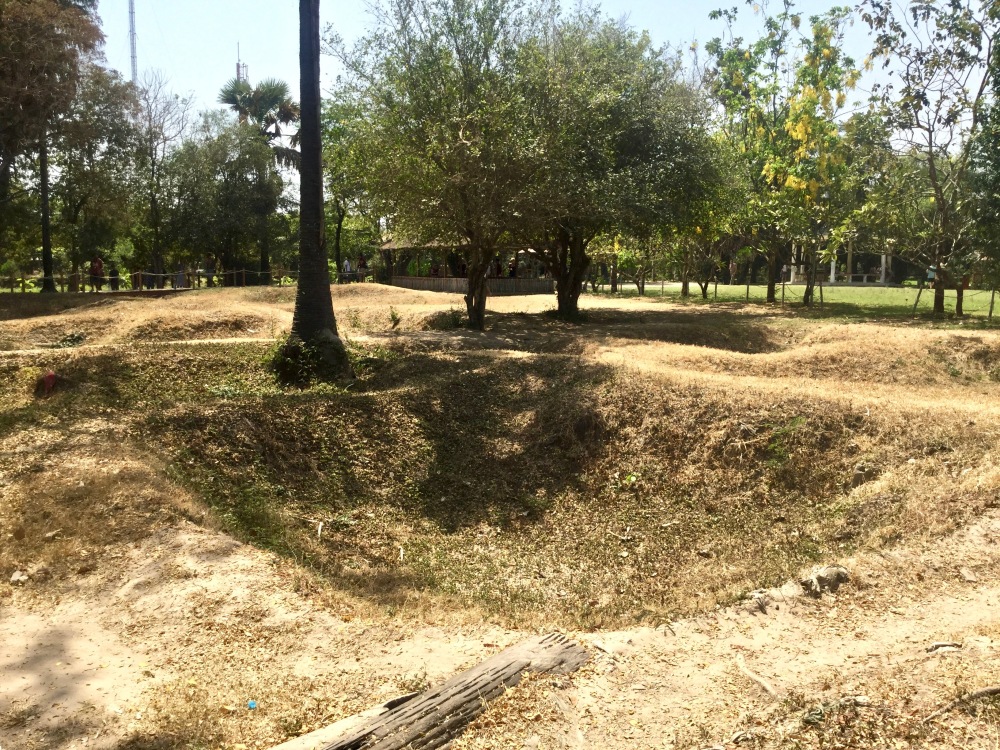 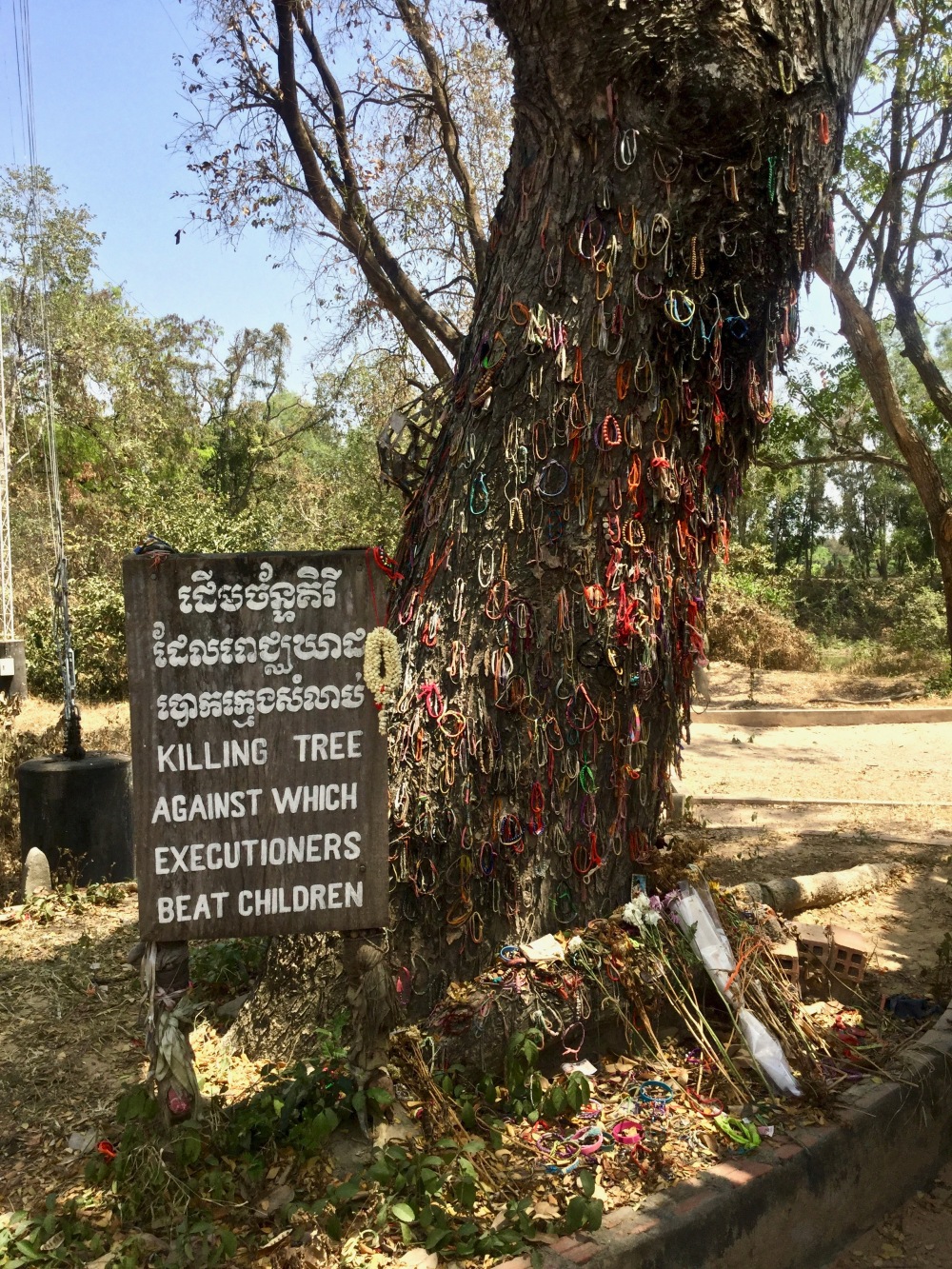 Bone fragments and articles of clothing are uncovered during the annual rainy season to this day. There was also the “magic tree,” where a speaker was attached to to play loud music in order to drown out the sounds of victims. 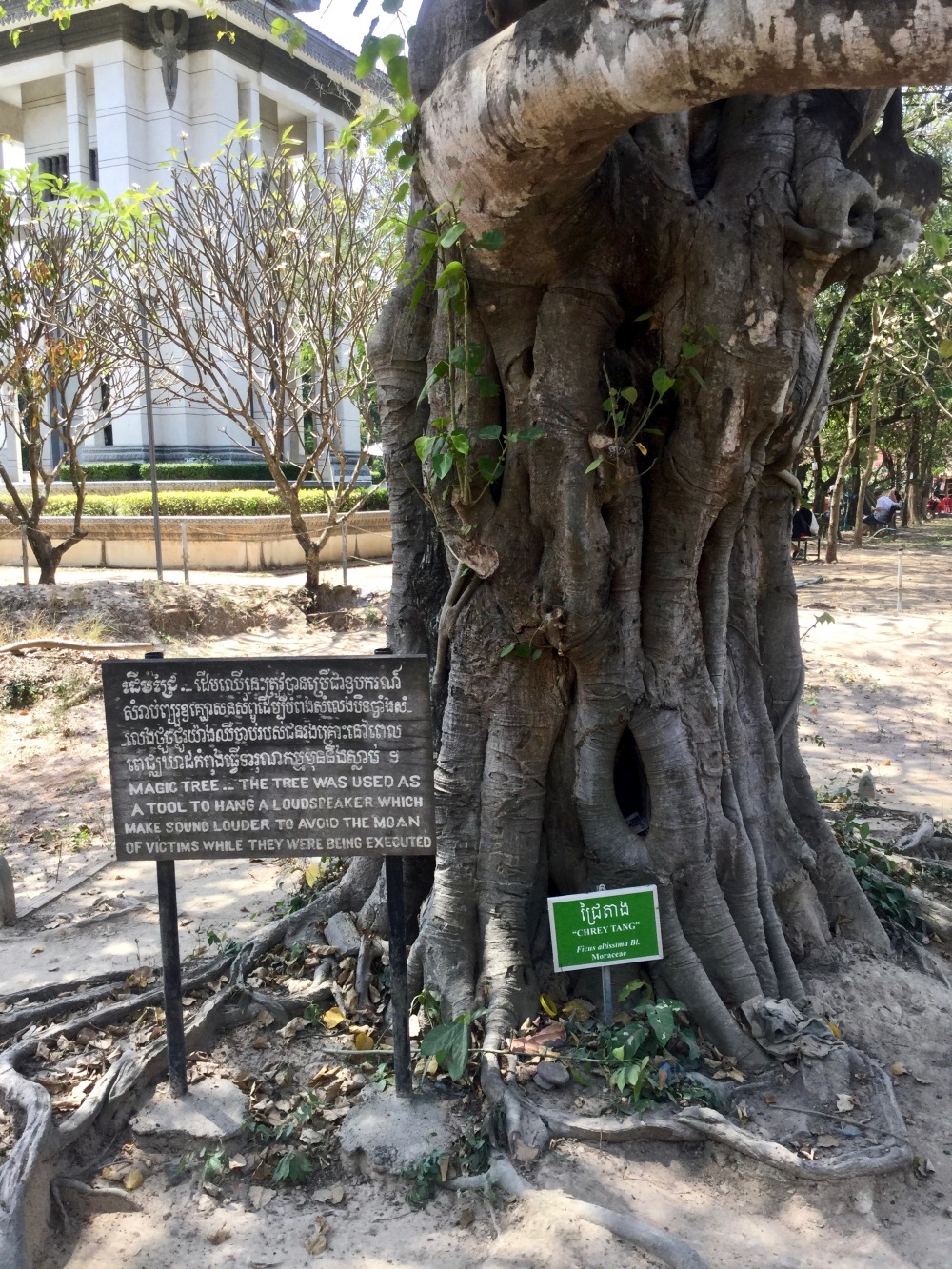 The last stop was a newly built pagoda that had a tower of skulls marked with color coded dots determining the victim’s sex and likely cause of death given the blunt force wounds to the skulls. 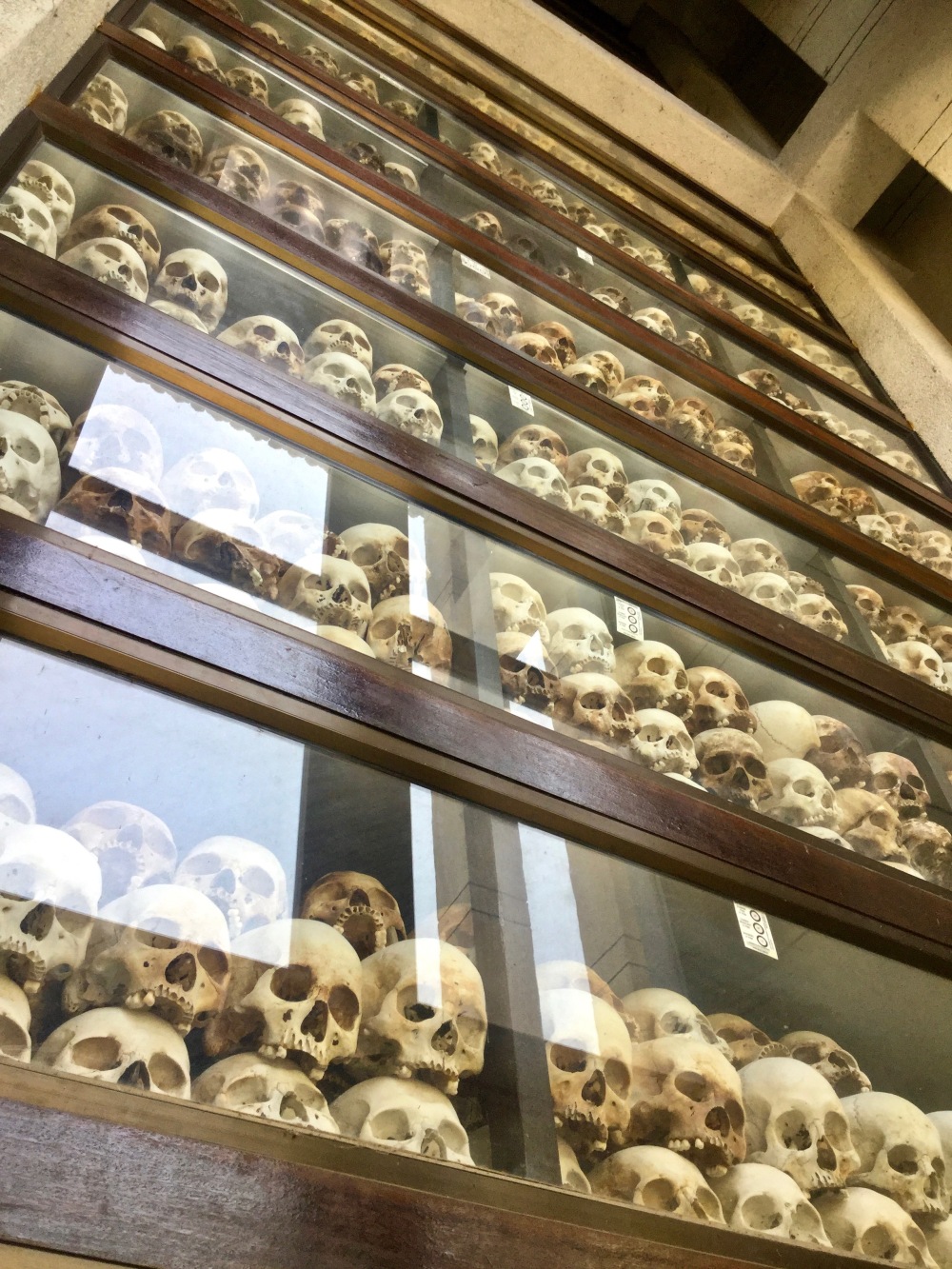 I didn’t know much about the killing fields prior to my visit, but found the whole tour absolutely heartbreaking. It was hard for me to wrap my head around. I couldn’t fathom what would drive any human being to behave in such a merciless way.