Hung out with the creatures of the night just before touching Waterton, then tripped out over the #pacificnorthwesttrail all the way to Chief Mountain. That about sums up the end of the #cdt2021 Now it’s time to finally knab that 👑 👑 👑 on the #pct2022 Hammer down!
Round 2 of wild and epic #glaciernationalpark It started to get smoky near the end, but this place was still stunning. 🤩
It’s that time of year! Hiking season is about to begin, and I just realized I never posted any pictures of #glaciernationalpark from last year’s trek. Here’s round one of one of my favorite places. Glacier got #grizzlybear, bighorns, swamp donkeys, and views for days! 😍
After spending a little too long out in the so-called “real world”, it was so damn refreshing to meet up with some of my tribe for a multi-day hike on my home trail. To those CDT tram members who couldn’t make it out, you were truly missed and gossiped about… A LOT! 😂 But I’m hoping some of you cross paths with us on the PCT later this year. Good luck Tapeworm on making it over halfway on the AT. 🔥 Enjoy the north. RIP The Doyle. You will do well I’m certain, but I’ll miss the glorious shitshow you once were. How the trail has changed! 🤯
I did a thing today. Probably won’t do it again. But I also said I wouldn’t run 13.1 miles ever again, sooo… 🤷🏻‍♀️Thanks @trevtrevorwhatever for the support, and super rad to catch up with you @wildturkeytrotsthru Thanks for the hospitality!
9/9/21 - Mission Accomplished! 🤘
Montana! You pretty!
Yet again, Montana brought the hiker friendliness in Augusta, and a sweet sunset too! Once we were able to force ourselves to leave, we were off to “The Bob” and finally got to see the Chinese Wall. We’re officially in the heart of grizzly country, y’all! 🐻
The sweet views continued all the way to Augusta!
Posted on April 19, 2019December 28, 2019 by Stubbs

We had excellent ridgeline views first thing in the morning once we climbed to the top of the high point. 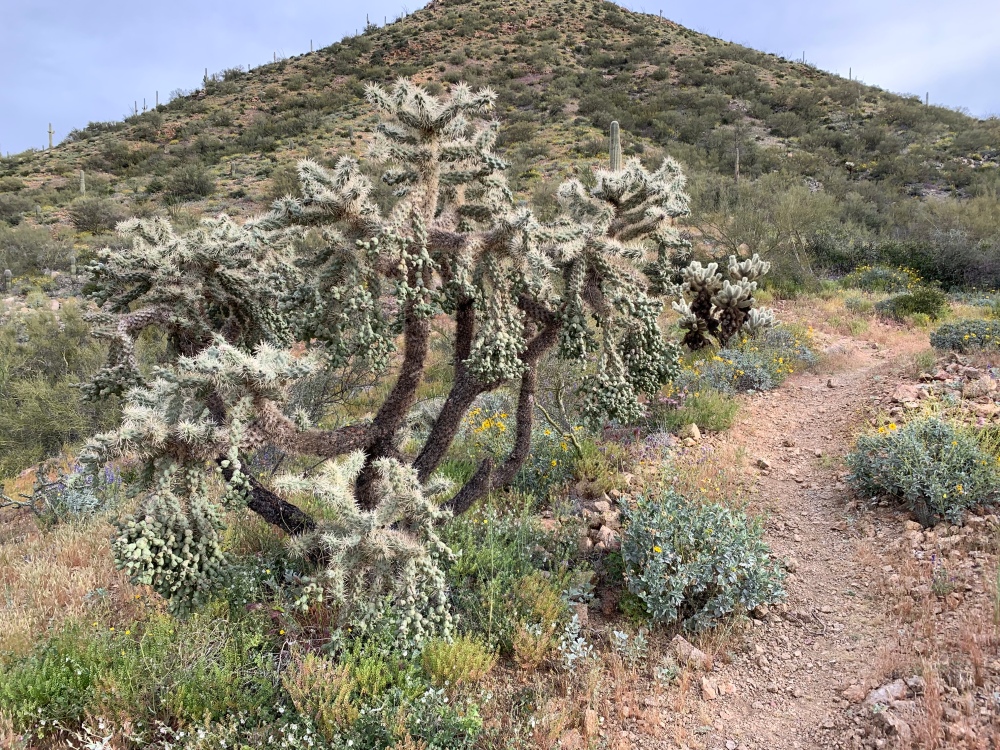 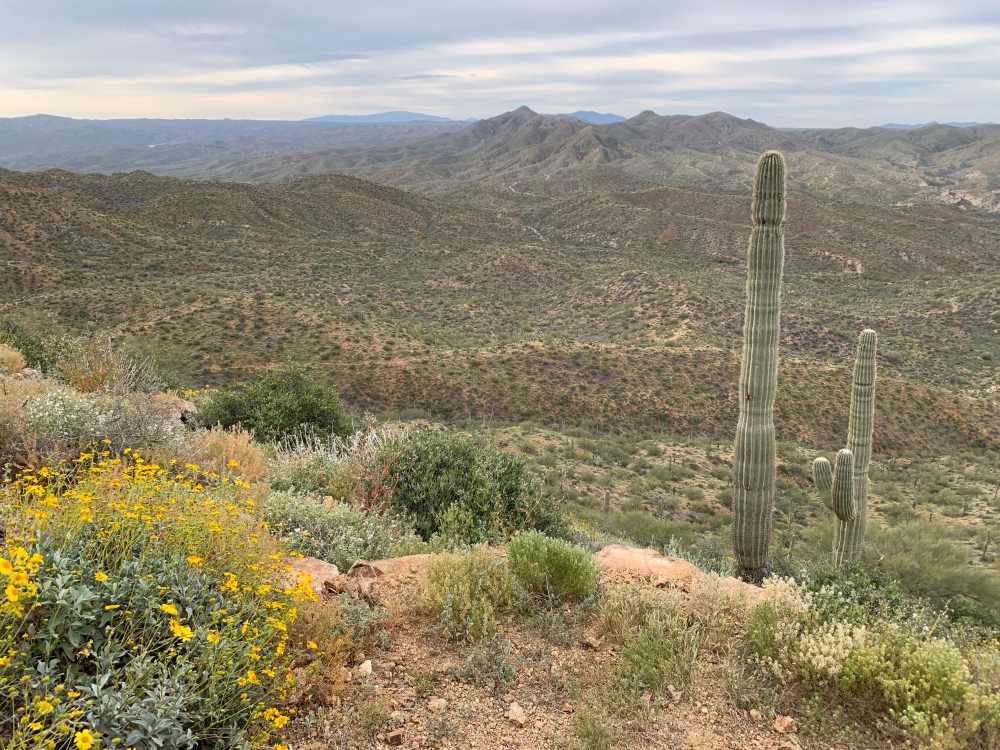 On our way down, we met a hiker named Numbers. From what everyone has told me, he moves at snail speed. But hey, you can’t blame the guy for taking it all in! He was still in his sleeping bag, cowboy camping at a nice viewpoint. 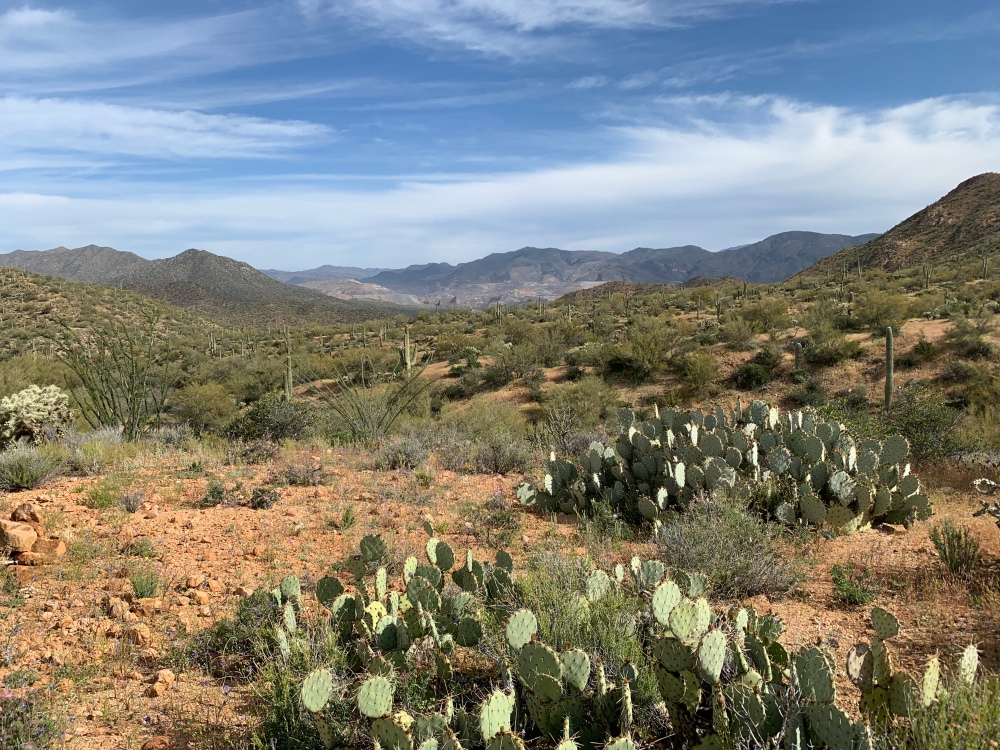 Also on the way down, I’d go airborne. No, I didn’t trip. I heard the sound that makes most people’s blood go cold. Right next to me, I heard the unquestionable sound of a rattlesnake. By the time I jumped to a safe distance and turned around, it was standing up on the back of its tail and giving me the death glare. Frisbee spotted it as he followed behind me over the hill, then the snake lowered itself and slithered sideways into a nearby bush. I’ve seen several rattlesnakes before, but this was the first one that rattled at me.

We would see many more wildflowers as we made our way down the hill towards the road. 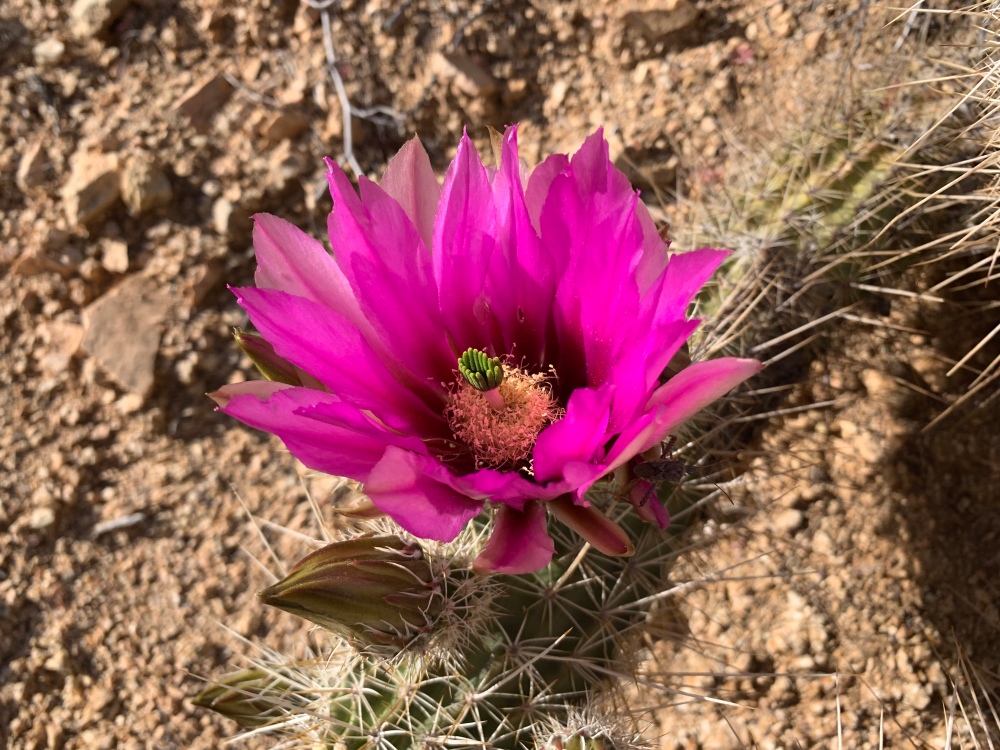 We crossed the Gila River and the railroad tracks as we made our way up to Centurian Road. After some brief confusion over where to hitch from, we walked in the direction of the Pima County Maintenance Yard.

There we found a hiker named Aquaman who was suitably standing next to a ‘drinking water’ spigot. Apparently with all the mining nearby, the waterways are pretty metallic and not safe to consume in large amounts. Unlike us, he was not looking to hitch to Kearny, so we said hello, then started walking down the road towards Highway 177.

This would be a tricky hitch. Not only was it not a direct route, there were basically no cars traveling through, let alone any going the same way we were heading. The first car we saw was heading in the opposite direction. He stopped, but only to apologize for not being able to help us.

Finally a tinted out Cadillac drove by heading our way and stopped. The driver’s name was Frank and he was accompanied by his little black dog who was sitting in the front seat. We hopped in the back and Frank said that one of us could sit up front. Frisbee said, “I wouldn’t want to steal ‘The Boss’s’ seat!” ‘The Boss’ being the dog, of course.

Frank shared his story of how he ended up living in Arizona accidentally. He had gotten divorced and went to Arizona to help a friend fix up a house. Years later, the friend suddenly decided to up and move to Hawaii, giving Frank a good deal on the house. This was all being said as the adorable ‘Boss’ stared at us from the passenger seat with his red retractable leash hanging from his mouth. Frank mentioned the wildflowers have not been so immense in at least 20 years, and pointed out how the mountains and hills on either side of us looked like they were covered in gold.

We arrived in Kearney, and before we could walk across the street to get some pizza in our bellies at ‘Old Time Pizza’, two separate individuals approached us, asked us about our hike and offered us a ride back to the trail. No wonder Kearny is considered “The Friendliest Town on the Arizona Trail.”

While ordering a large cheese pizza, we met another hiker named Rand who was preparing to eat a large Supreme pizza all by himself. My hiker hunger has yet to kick in, shocking enough.

After eating, we walked across the street to resupply at the IGA. We decided to eat some more after getting our food bags together. So we grabbed some fried foods at the IGA deli, and were joined shortly by Kidska and Rosey. They were sticking around town as we went on the search for a ride back to the trail.

We’d get one from a local woman named Nicole whose son sat in the back seat with Frisbee. She was heading to Superior to take him to the doctor. I apologized for our stench. Nicole said it didn’t bother her, they were “outdoorsy people.” She told us her son even wanted a birthday party by the lake. According to Frisbee, he wasn’t looking too thrilled to be stuck in the car with two smelly hikers.

After getting dropped off, we filled up at the ‘drinking water’ spigot before returning to the trail. We didn’t travel far before Frisbee jumped back at the sight and sound of a rattlesnake; number 4! This one also slithered sideways into a bush after seeing us. I was suddenly scared of bushes.

Walking along the trail was beginning to feel like walking through a haunted fun house. We braced ourselves with every step, waiting for another rattlesnake to pop out before us. I was so on edge that I saw an old cow pie on the side of the trail and jumped, thinking it was a coiled up rattler!

After walking through some nice scenery, we stopped to talk to a guy named Chris who was taking a break in the shade while hiking in the opposite direction along the Grand Enchantment Trail.

We exchanged information regarding the trail ahead, then hiked all the way to a wash. The tent was hard to pitch in the loose rocks, but we secured the stakes with larger rocks, and hoped it would be enough to last through the night.

Jump Ahead to The Arizona Trail: Part 15

Jump Back to The Arizona Trail: Part 13