It’s #tattoo season! Fresh #ink by the very talented @noalox Thanks buddy! Lovin’ it!❤️
Got me some fresh #ink by the very talented @noalox Solid work per usual and always awesome to see y’all! Thanks buddy! I’m lovin it!
44 miles in 17 hours (15 hours if you exclude all the breaks) with 7 hours to spare! 🤘 I finally got to complete the Four State Challenge on the #appalachiantrail About three years ago, I started treatment for my osteopenia 🦴. I’m grateful that I haven’t had a single fracture since, and that I can continue to do what I love! ❤️ This also wraps up our “One Year Section Triple Crown!”😂 We’ve hiked a section of the #continentaldividetrail (200 miles), #pacificcresttrail (22 miles), and now the #at Hammer down! 🔨 👇
Tuesday, September 8th, 2020 - That’s a wrap! 🤘 Dirty. Smelly. Satisfied! The #tahoerimtrail delivered, and we finished just in time! Today, we met some hikers that were forced off trail by officials due the the #wildfires 🔥 Sad to say goodbye to our trail brother, Dr. Thunder, and to our time on the west coast. Back to the grind til next year! 😭
The Desolation Wilderness was friggin’ amazing! Sadly, our hike would be coming to an end soon after, but this was a damn good send-off!
#nofilter No, really. That’s the color of the sky brought to you by the wild fires. 🔥 We took a nero day in South Lake so I could recover. Still incredibly dehydrated and ill. 😵 I feel like I’m having a multi-day hangover, and I don’t even drink anymore! This was what the trail looked like when we returned, and it was raining ash.
I was still severely dehydrated from the day before after an uncomfortable night at Heavenly. I drank as much water as I could stomach, but was only able to eat a meat and cheese stick during the 25 miles we hiked. On the bright side, we crossed the state line back into #california , I cooled off in #starlake , and it was beginning to look more and more like the #sierras 😍
We climbed to the highest point of the Tahoe Rim Trail, and the sky was clear for most of the day, but the smoke rolled back through later. So sadly, we missed out on Sand Harbor Overlook 😓The next day was a super dry stretch. I underestimated the 15 mile stretch after the water cache, which wound up being a very exposed section. Heat exhaustion and sun poisoning is no joke! I’m posting this days late, and I’m still suffering😵
Stoked the smoke cleared so we could see the lake as we started our first full day on the #tahoerimtrail We crossed the border into Nevada and entered the Mt. Rose Wilderness where we camped at Grey Lake for the night. A good start to a new trail if you ask me!
Posted on April 28, 2019December 28, 2019 by Stubbs

We wouldn’t sleep so well overnight. Gusts of wind pulled out our tent stakes on more than one occasion. The loose soil next to the creek made it hard to securely fasten them in the ground. 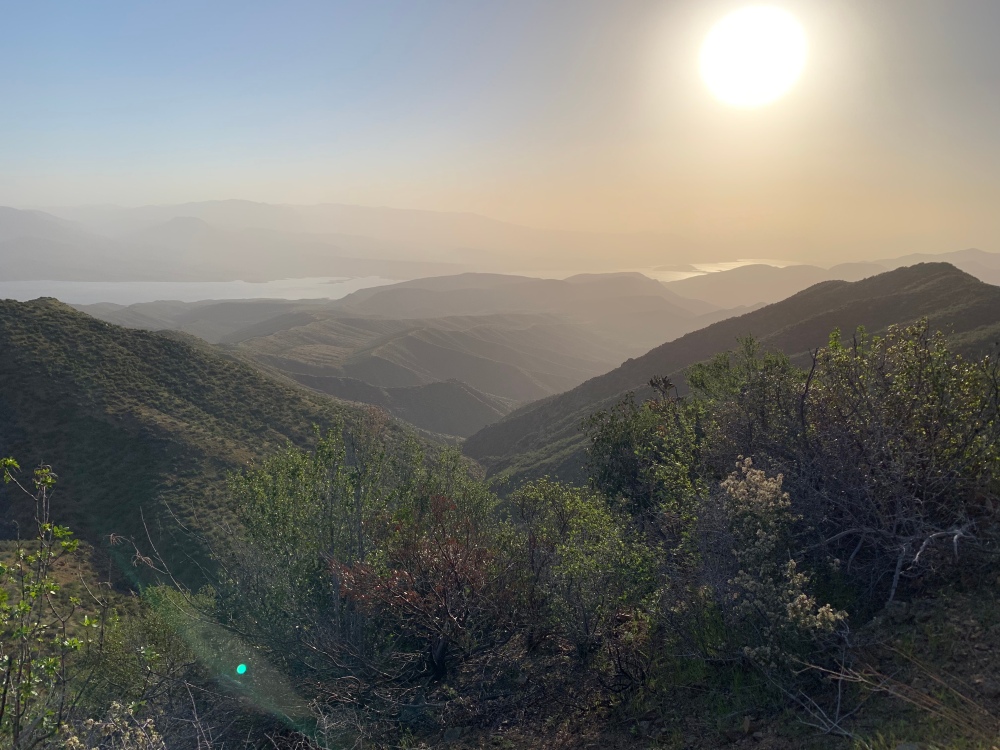 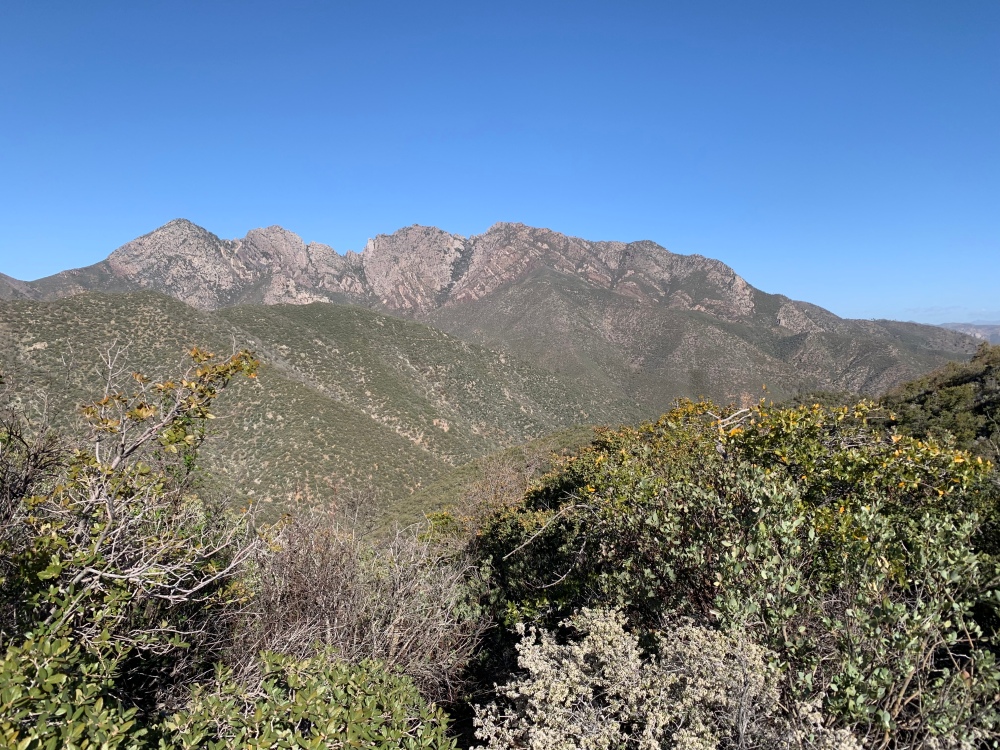 Once we finished our early morning climb, it was mostly ridge walking through the Four Peaks Wilderness. 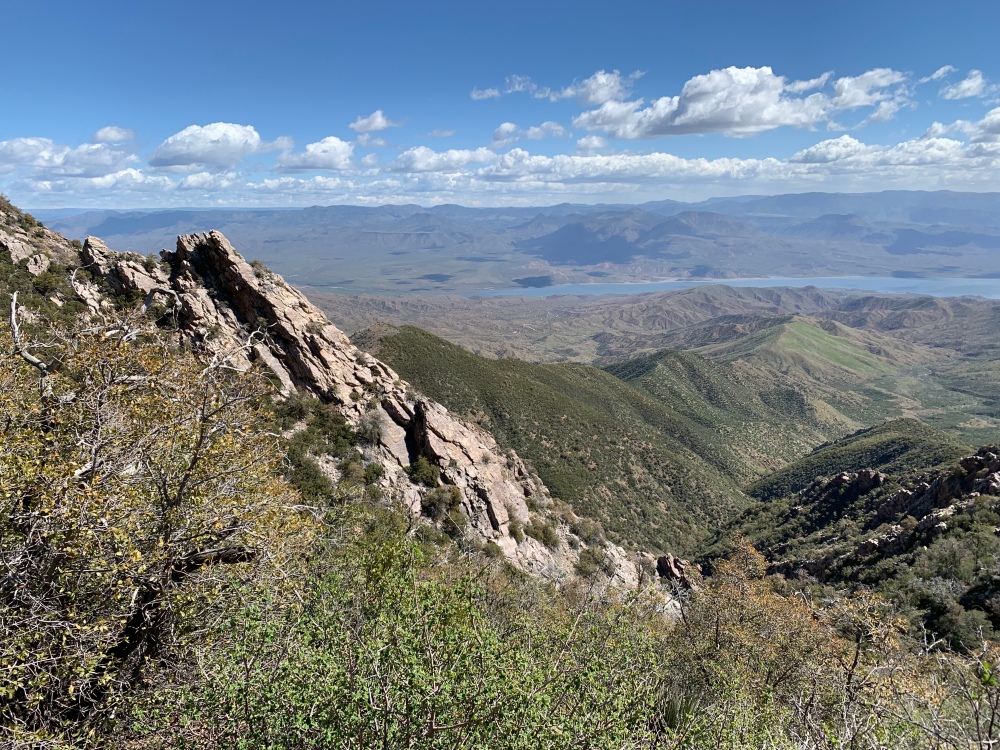 During the hike, we met a hiker who used to go by the trail name Nobo Lobo when he hiked the Pacific Crest Trail, but now preferred to go by his given name, Klaus. He was born in Mexico with a German father, and spent part of his youth in Germany during the War. He came to the US, Michigan to be specific, to learn English and that’s where he met his wife and settled down. He is not an ultralight hiker, and may be older than most of the hikers out here, but the guy is fast!

It was another windy day, but the views were abundant. We stopped at Shake Spring for lunch. Klaus would join us shortly after we settled down, followed by Rosey, and then Gerber. The water was clear, flowing and sourced from snow melt, so I decided to take a break from filtering.

After lunch, we left the wilderness and went through another area that reminded me of Vedauwoo in Wyoming.

Then the dirt road walk began. There was initially some SUV traffic that we managed to dodge, then we traveled through some exposed areas where it felt like we were in a wind tunnel. I put my buff over my face on a number of occasions to bloke the dust, and one gust was so strong, that all of us were pelted by gravel. 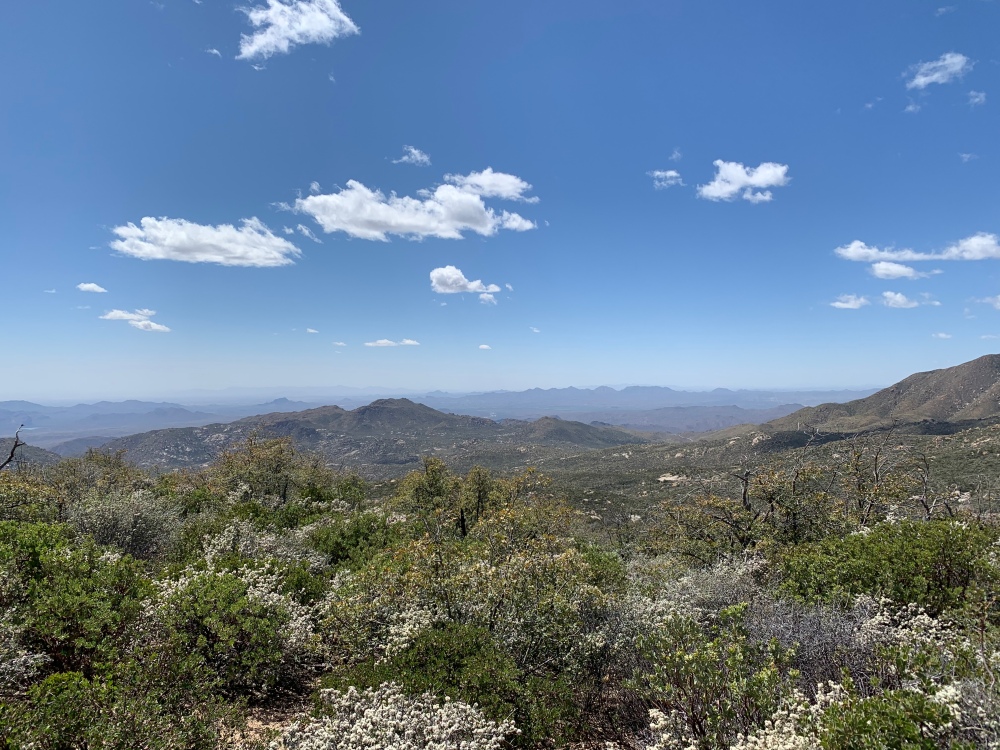 Once we got to Little Pine Flat, we briefly met hiking couple, Geronimo and Puns. They filled up on water, then went on their way. We ate an early dinner there, and did so very quickly. The temperature had dropped dramatically.

Klaus caught up with us, but decided to keep moving. Rosey and Gerber followed suit. Gerber and Rosey has planned on staying there for the night, but once we all witnessed snow flurries, they decided to keep hiking. They stayed back there to eat as we worked our way down the steep gravel road.

We were still fighting the wind when the trail left the road for single track. The following section would mostly be downhill with stream crossings, and the briar bushes would be overgrown. My Frogg Togg jacket was pretty shredded by the time we bushwhacked through it all. But hey, that’s what duct tape is for, right?

We’d escaped the wind, passed Puns and Geronimo who were set up by a water source, passed a hiker named Rebecca (still no trail name), and we’d eventually catch up to Klaus who was flying!

We’d settle on a grassy stealth site about 3 miles from the highway at mile 383.1, and listened to airplane traffic fly overhead as we tucked in.

Jump Ahead to The Arizona Trail: Part 21

Jump Back to The Arizona Trail: Part 19