I heard Klaus walk by our tent in the morning, and decided it was time to wake up. We started the 3 mile walk to Highway 87. I’d be unable to avoid getting my foot wet while crossing a stream, but it was no big deal. We would be staying in town for the night. 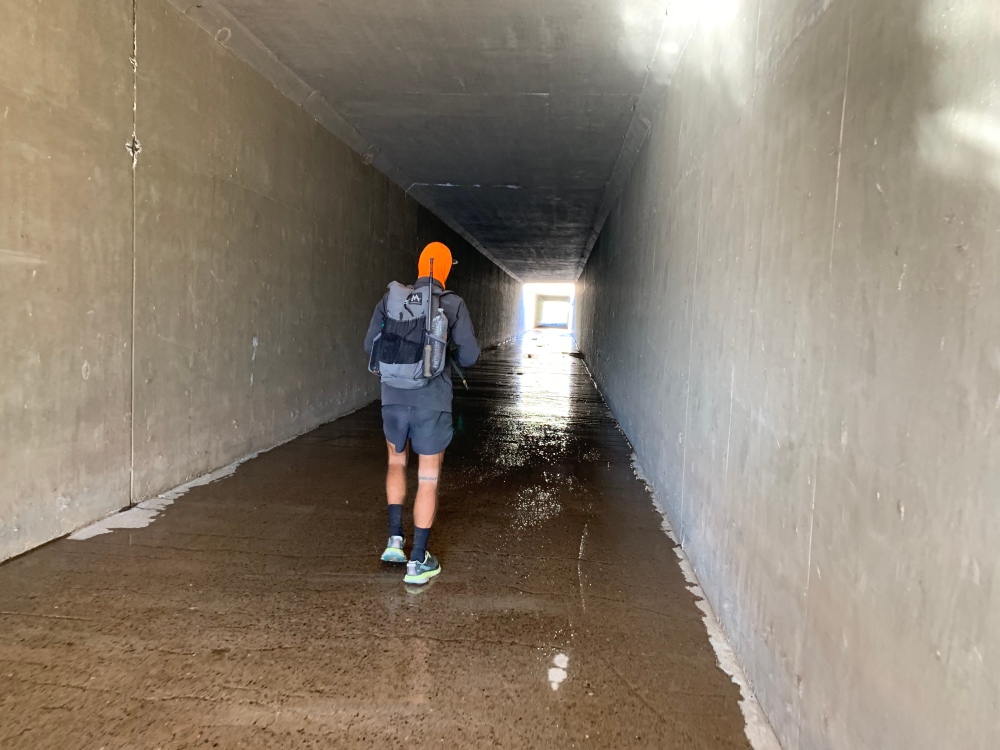 Klaus was still trying to hitch when we reached the road. He told me yesterday that he always struggles to catch a hitch, so I promised him that if we were at the road at the same time, we’d make sure he got into town. Frisbee and I did our usual dance with our thumbs out, and 15 minutes later, the three of us were squeezing into a pickup truck for the 30 mile trip to Payson. The driver’s name was Jonathan, and he was in the process of building himself a house there.

He dropped us out front of Burger King, and Klaus joined us there for breakfast. We talked a while with him, so long that it was soon lunchtime. We both had a Whopper sandwich before going our separate ways. He went to Comfort Inn, and we headed next door to the Budget Inn.

After getting checked in, we ran back into Rosey and Gerber who were a few rooms down from us. Rosey joked and said that they had been there since 8 am, which we knew was bullshit given that they were miles behind us and that was when we hitched out.

Then it was time to tackle some hiker errands. We walked to Walmart to resupply and I looked like a bag lady as I struggled to lug all of my groceries back to the motel. We organized everything for our mail drops, something we usually don’t do, but the next couple towns had less than desirable resupply options. We lugged everything to the post office, mailed our stuff ahead, and finally returned to our room to get a shower. Our motel had no laundry facility and the laundromat was on the other side of town, but Klaus was nice enough to tell me where the laundry room was at his hotel and how much it was. So I snuck in there to finalize our town transformation. When it’s been a week or longer since you’ve been clean, you find a whole new appreciation for showers and clean clothing!

Our chores were done at last and we felt human again, so we ate spicy green curry for dinner at Ayothaya Thai Cafe which was recommended by Rosey and Gerber, went to McDonalds for coffee and WiFi, then watched bad TV til midnight. Sadly I wouldn’t get any sleep. There were a pair of methheads staying in the room next door who were talking loudly and slamming doors until early morning. Damn tweakers.

It was supposed to rain so we debated, and decided to have ourselves a zero day. It would only be our second one since our last in Oracle. After meeting Klaus for coffee at McDonalds, we tried to convince Rosey and Gerber to stay for a zero as well and dodge the rainstorm that was scheduled to roll in through the afternoon and evening. We failed. They did join us for the lunch buffet at Pizza Hut though, hosted by a very chipper gal named Cherie, before they left.

They took off in the rain, we returned to the room to do a whole lot of nothing, only leaving briefly to eat dinner at McDonalds later that evening.

Jump Ahead to The Arizona Trail: Part 22

Jump Back to The Arizona Trail: Part 20