From Yosemite National Park to Lee Vining, to the famous Ansel Adams Wilderness, and a road walk into Mammoth Lakes. About to get in the thick of it!
We finally escaped South Lake Tahoe and hiked through some high desert before heading into the Sierra! Let’s go!!!
Farewell Oregon! Hello (again) NorCal! But not for long. Had a blast hanging out with friends, old and new in Ashland before making our way to the border. Met one of the best trail angels, Big Mama there who shuttled us everywhere while refusing any donations. You’re amazing! It was a huge relief to connect our footsteps from Canada after the McKinney fire forced us to flip. The previously closed section between Seiad Valley and Etna was dope! It was bittersweet leaving Etna to start hitching back to South Lake Tahoe to pick up where we left off. I really miss you guys @gwebsterb and @cole.pc It was a blast hiking with y’all! Took us only 5 hitches (Weed to Shasta to McCloud to Old Station to South Lake) with some really awesome folks to reach our destination. Should be back on trail and Mexico bound 🇲🇽 on Wednesday. Time to wrap things up and get this triple crown already!
We could see the plume of smoke from the Cedar Creek wildfire for days from Mount Thielsen Wilderness to Sky Lakes Wilderness. However, this stretch of trail was amazing! Mount Thielsen is apparently the “lightning rod” of the Cascades and I would have loved to summit it to see the fulgurites (spots where the rock was melted and crystallized). That will have to wait another day. The smoke left the views at Crater Lake National Park a bit hazy, but it was still absolutely gorgeous! Plus it marked Frisbee and my unofficial halfway point on the PCT. Sky Lakes Wilderness to Fish Lake was also not disappointing. The forest was thick and there were so many different conifers, plus I saw two bears. Oregon is coming to a close, but it’s been dope!
Walking by the Three Sisters made us feel like we were walking on Mars. By the time we reached Elk Lake Resort, we caught word of a new wild fire just ahead with a PCT closure. Add it to the list! We recruited some new friends to join us on the road walk around the fire the next day. Only about 8 of the first 40 miles involved walking through thick smoke and there was broasted chicken with jojos in town when we finished. After a pancake breakfast at the firehouse the next morning, we took the railroad tracks to Shelter Cove.
Oh geez, I’m so behind! We left Timberline Lodge feeling sluggish and hitched to Government Camp. So glad we did since it was one of our favorite places on trail! We got some incredible views of Mount Hood and Mount Jefferson before passing through the Lionshead burn area. The devastation was huge, but it was still a beautiful section. Saw mountain goats at the base of Three-Fingered Jack before hitching to Sisters, where we had an awesomely unexpected zero (Thanks @wildturkeytrotsthru )! We said goodbye to the #llamas and hiked through a lava rock field as we approached the Three Sisters.
The day leading up to it was socked in with fog, but we made it to Timberline Lodge with some sweet views of Mount Hood. The buffet was all I dreamed of, the lodge was beautiful, and I got to hold the ax from “The Shining” before dippin’ out! My only regret is not summiting Hood before I left, but we’re on a time crunch and it’s a damn good excuse to come back!
Hello Oregon! After taking an alternate and sleeping next to a guardrail on a busy highway, we night hiked across the Bridge of the Gods and left Washington state behind us! Got to celebrate my birthday in Cascade Locks and hike a very scenic alternate back to the PCT munching on blackberries. Tunnel Falls and the whole Eagle Creek stretch was dope! 😍 Hopefully now that most of Oregon is opened back up from all the wildfires, we can finish it up before jumping back down to Echo Lake. 🤞 We shall see!
I made friends with a #marten and saw a cool #waterfall after working my way down from #goatrocks We enjoyed a nice pit stop at Trout Lake then ran into our buddies Walter White and JeffR from the CDT, and back into Flamingo Kid and Yardsale who we hadn’t seen since flipping from NoCal. We also got to enjoy some more #trailmagic thanks to Cowboy and Mrs. Cowboy, and Peppa and his doggo, Pudding. Our bad times seem to be behind us as we get closer to the state border. Finally!
Posted on May 8, 2019June 11, 2019 by Stubbs

It was time for us to start making our way to our next destination, Vietnam. We wouldn’t be arriving there just yet. First, we had to return to Phnom Penh. We rode along in a minivan to get there, and had a giggle at one of the signs during one of our rest stops. 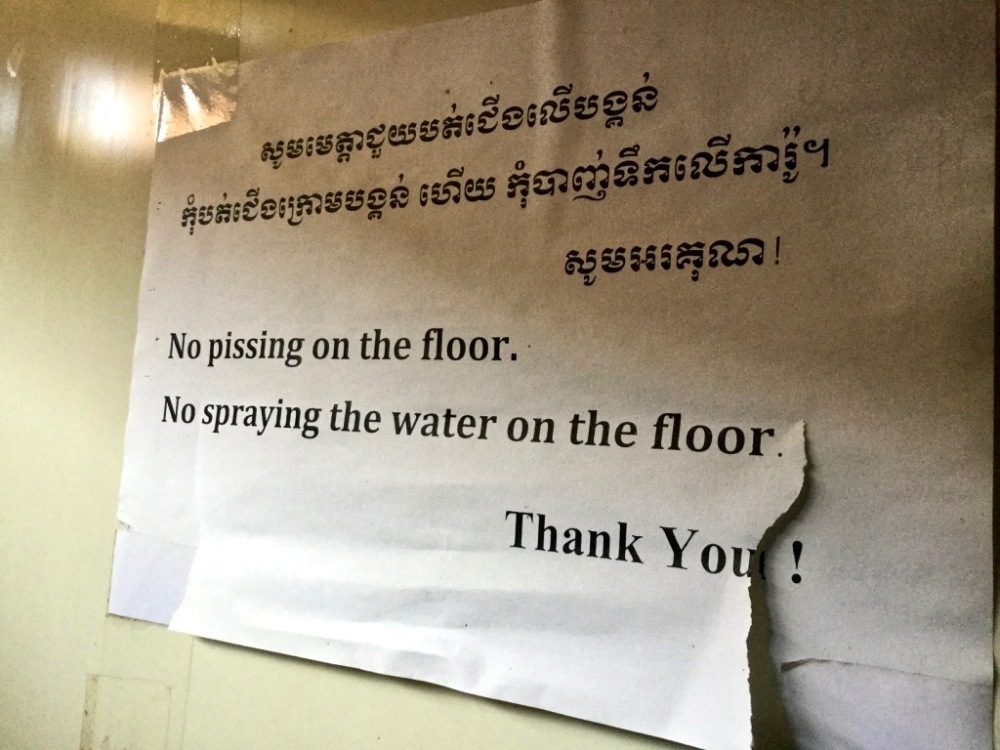 We had the driver drop us off by the river so we could eat lunch before searching for our hotel. We were starving! We both got club sandwiches at a place called “Grand River”. This would not be a meal shy of activity. Every two seconds, we were presented bracelets to buy. Trevor ended up giving in and bought a couple. 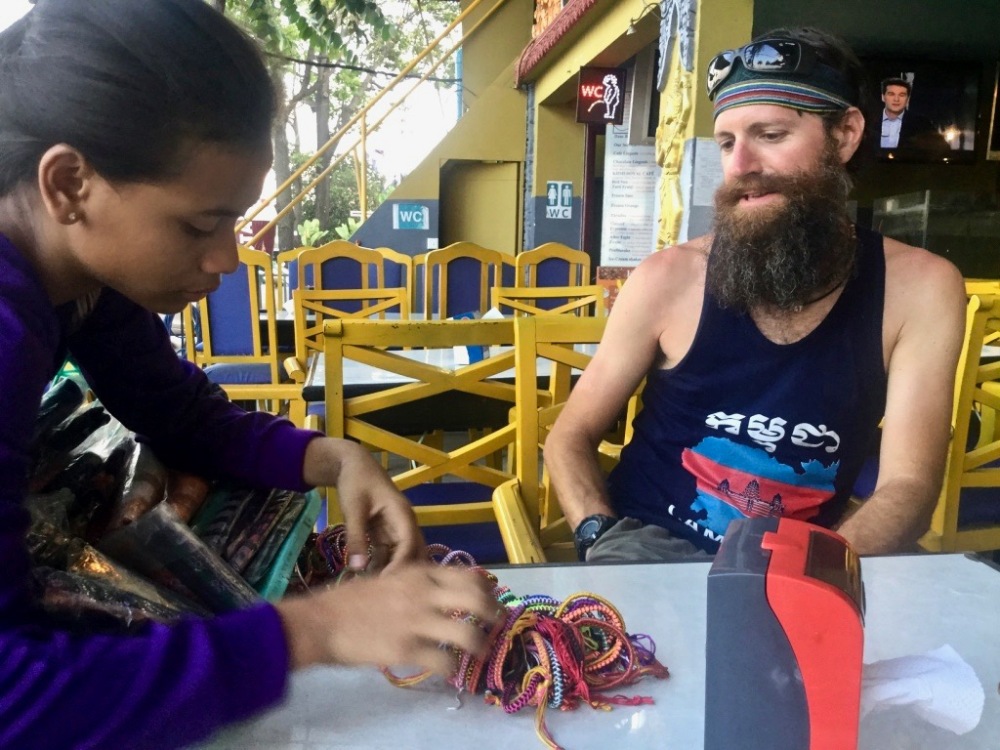 A beggar passed us that resembled the “Elephant Man.” This broke my heart, I couldn’t imagine his life’s struggles. Drama followed suit when a small fight broke out at the bar next door between a drunk guy and a man with an English bulldog. We couldn’t pinpoint exactly what just unfolded, but gravity was involved as the drunk guy was now laying on the floor of the bar, cussing at everyone kind enough to try to help him up.

We tracked down “Mama Veary’s Guest House” and got checked in before heading towards Central Market. On the way, a motorcyclist drove into my arm, but it only resulted in minor bruising. A local pointed at Trevor’s t-shirt which had something written in Khmer. We were curious, so we asked him what it said. He claimed it said “Cambodia”, but we were starting to wonder if it actually said something more along the lines of “Penis Boy” or “Dickhead Tourist”. Which would be funny enough to still make it a shirt worth wearing, I should add.

After strolling through the market, we returned to the river to bar hop a bit, starting at “King’s Court” then back to “Khmer Royal Hotel” and then up to the rooftop bar at “Grand River Restaurant”. 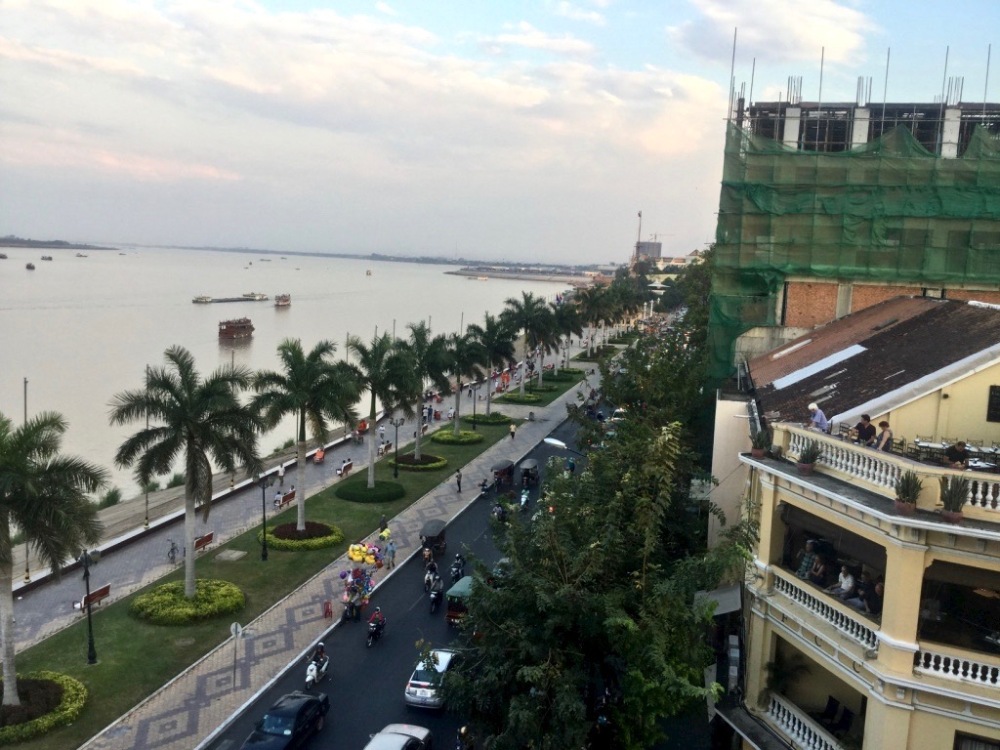 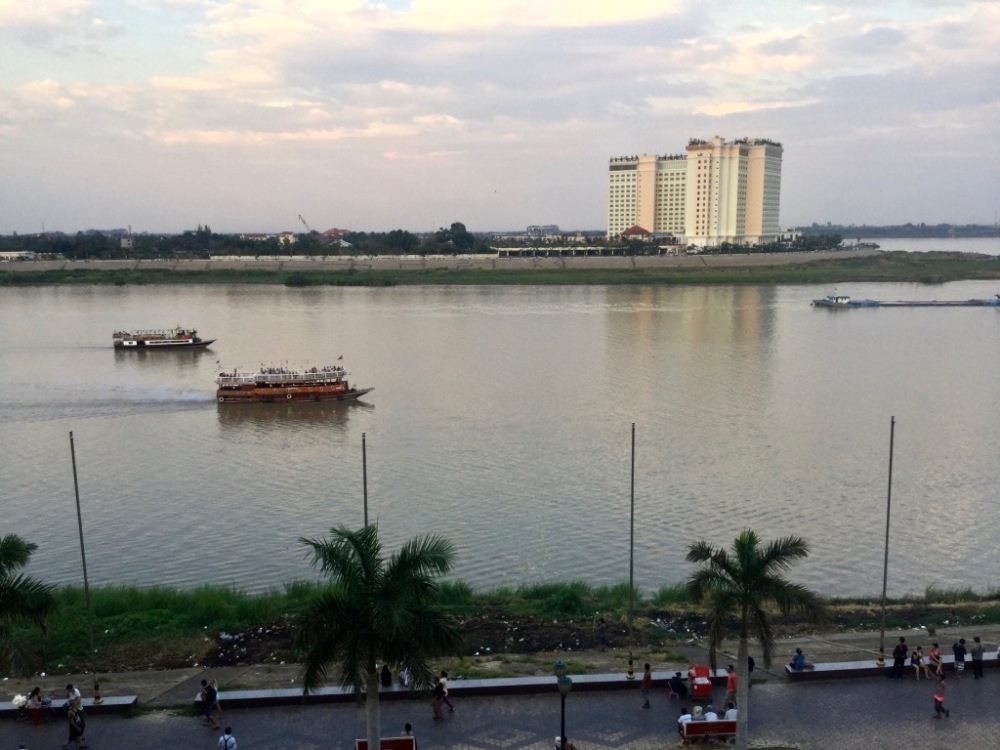 We enjoyed the scenery and talked to a couple from Louisiana before grabbing lasagna at “Amazing Happy Pizza Pub”. I rolled my eyes at an overweight Aussie wearing a bra with suspenders who was blabbing to her friends that I had been staring at them. As ridiculous as she looked, I was more focused on the typos on the menu posted behind her. They never lose their charm.

Back at the guest house, we got settled in for the night. Before closing our eyes, we heard a guy in the room across the hall yell to his buddy, “Mate! I just saw a cockroach run into your room!” Once things settled down, I listened to birds singing outside. Instead of a cheerful song or chirp, it sounded more like a disgruntled, “Fuck-off, fuck-off, fuck-off! Fuck-you fuck-you!”

Jump Ahead to Vietnam: Part 1: Busing Across the Border to Ho Chi Minh City