9/9/21 - Mission Accomplished! 🤘
Damn Montana! You pretty!
Yet again, Montana brought the hiker friendliness in Augusta, and a sweet sunset too! Once we were able to force ourselves to leave, we were off to “The Bob” and finally got to see the Chinese Wall. We’re officially in the heart of grizzly country, y’all! 🐻
The sweet views continued all the way to Augusta!
Had an awesome birthday which I celebrated with my stinky, freeloading #hikertrash tramily, the wonderful people of Lincoln, and Daryl the Sasquatch. The hike from Rogers Pass was just as amazing as the hike into it after we hunkered down in a yurt to avoid the rain. More climbs, but a lot of ridge walking by rock ledges and towers.
No more smoke, but the days have been windy and the nights have been cold. We visited an amazing outfitter in the middle of the trail, got to see Golden, a familiar face from the AT (2016), and lots and lots of cows! I had been in a bit of a funk lately, but the ridge walk right before reaching Rogers Pass snapped me out of it!
Got stuck in the Butte vortex. We hitched in, hitched out, hiked to the north side then hitched back in. Pizza Ranch was our second home. Eventually we made our way to Helena, our second vortex. Before our arrival, we got pounded by hail and rain. The wind was blasting through the trees so hard, they were snapping like twigs behind us. The people of Helena were beyond hiker friendly. We got stuck a second day when a girl working at the brewery let us crash at her place for free, hot tub included! Life’s good!
The road walk continues. Nevada City to Twin Bridges to Silver Star to Butte! Time for a couple zero days!
Most of us had trouble getting the Big Sky Alternate maps, so we’ve been road walking. These things don’t bother me as much as most people. Road walks can be pretty fun! We’ve been bouncing town to town: West Yellowstone to Big Sky. Big Sky to Jeffers. Jeffers to Ennis. Ennis to Virginia City to Nevada City, and still rolling! Our end goal is to get to Butte, finally do some laundry, get showers (cuz we smell like sweaty buttholes), then return to the CDT to crush those last few hundred miles. It’s been fun making friends with the locals, and it’s also been more scenic than expected!
Posted on May 10, 2019December 28, 2019 by Stubbs

The morning was chilly and windy, but we kept catching glimpses of the lake. We got off track again. This whole section has been very poorly marked. 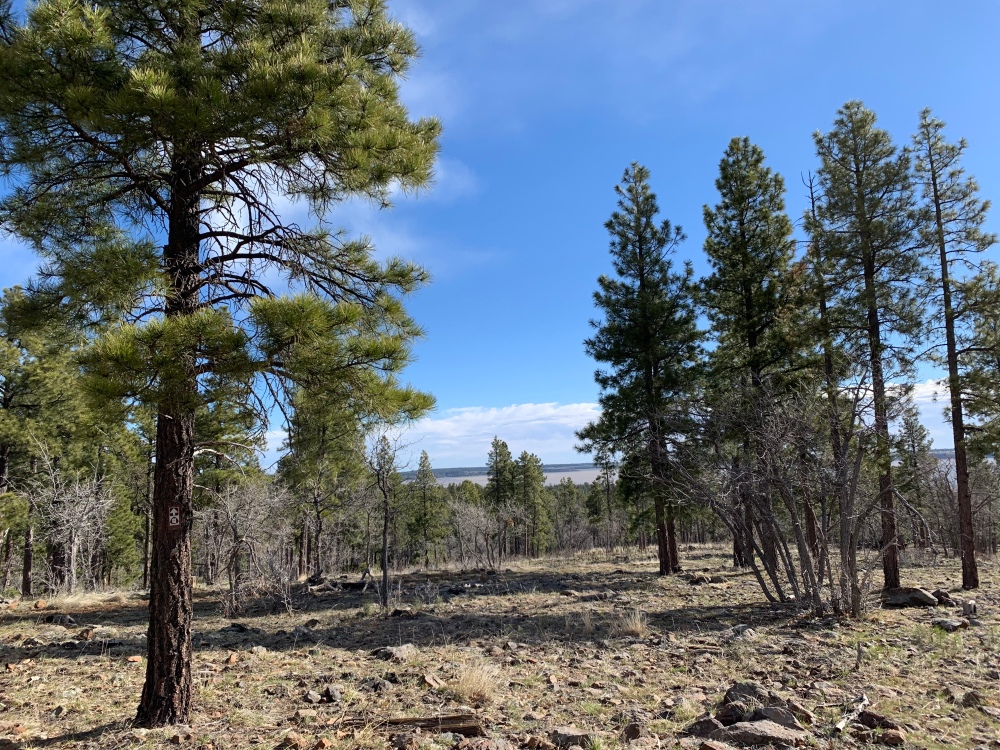 We shivered as we took a snack break at Double Springs campground. The single track would follow alongside an old, early 20th-century logging railroad bed. 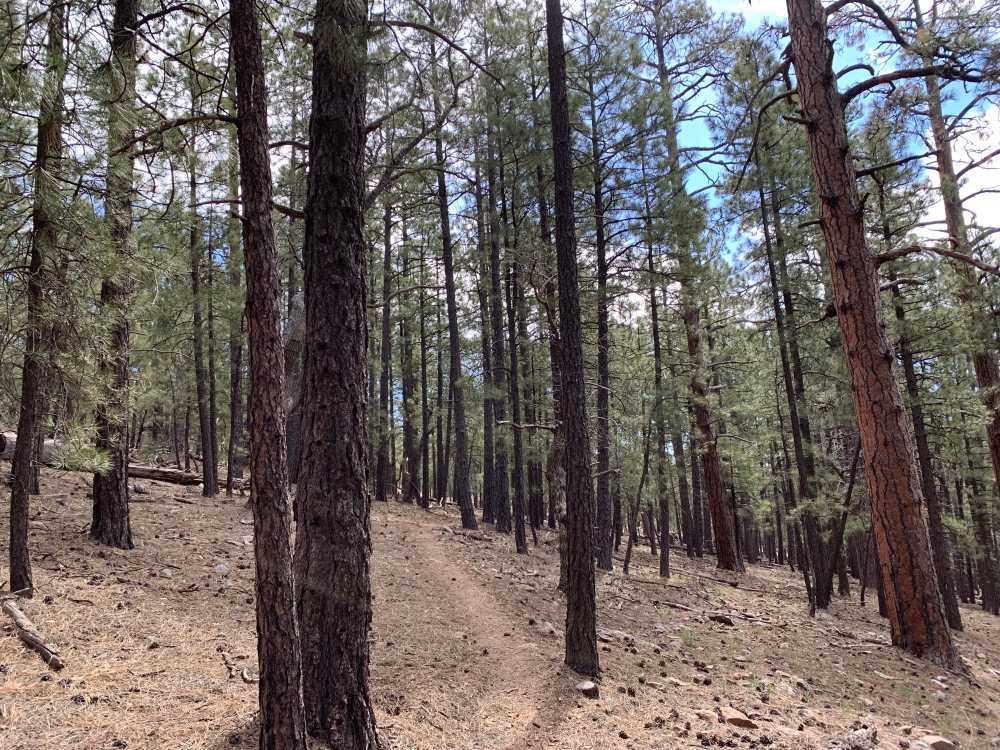 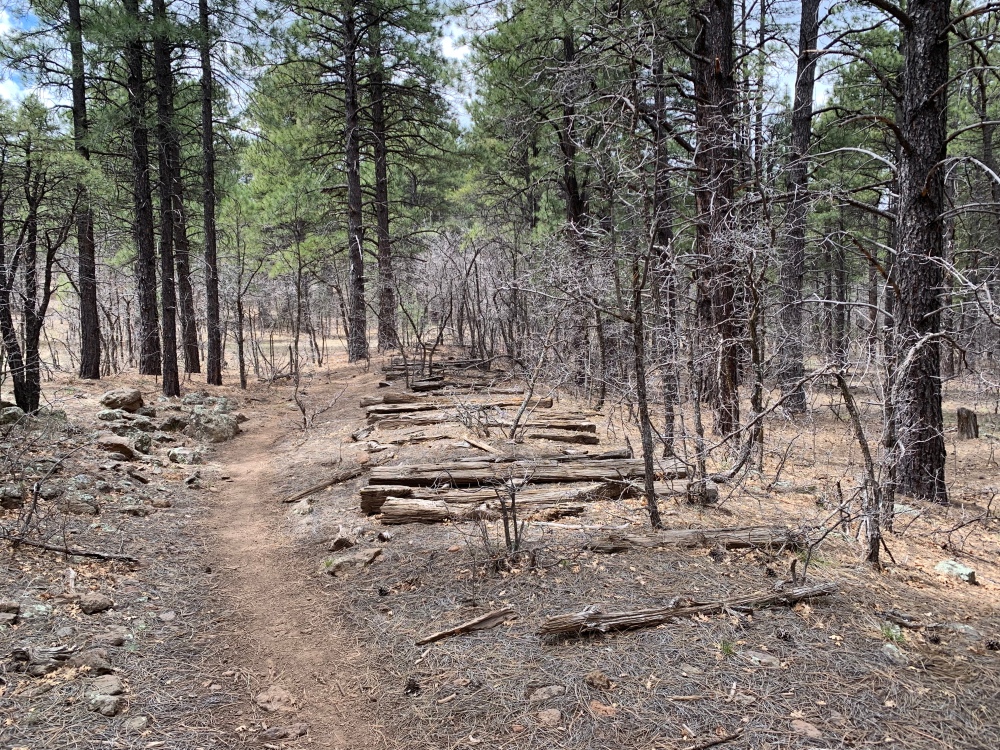 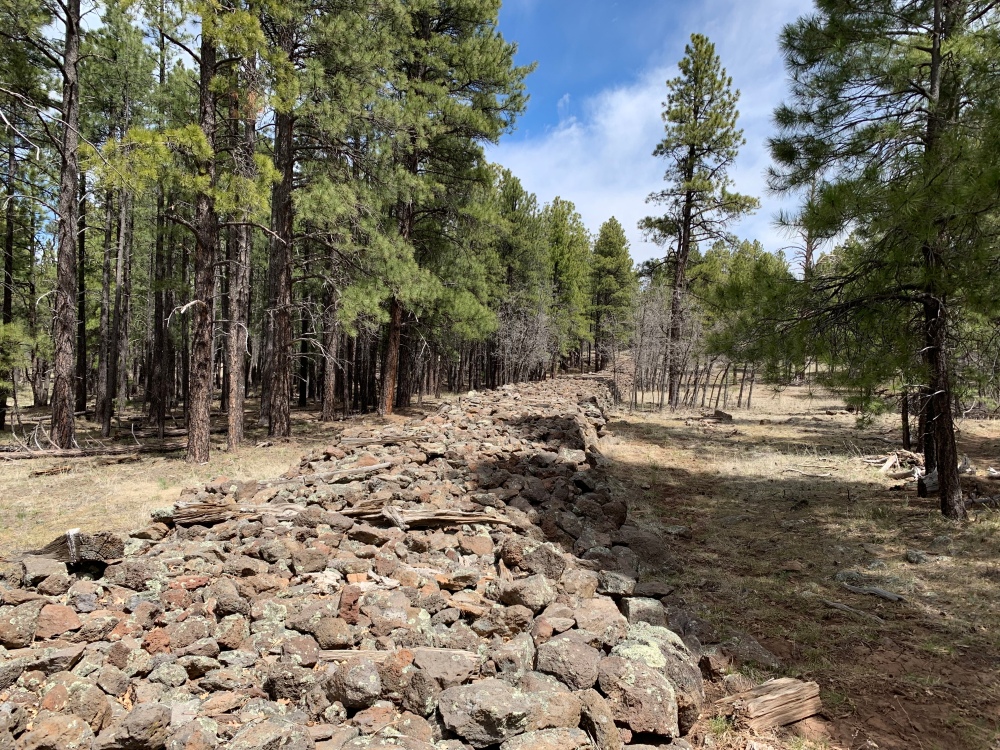 I’d pick up a feather with an yellow-orange shaft and Frisbee stuck it in my hat. It bothered me, so I sat it on a rock and hiked on. Funny enough, an older, southbound hiker was approaching us shortly after with the same type of feather in his hat. He told us he finished the trail earlier this year, and that the feather belonged to a Northern Flicker. We told him the location of the feather. The one in his hat had seen better days. 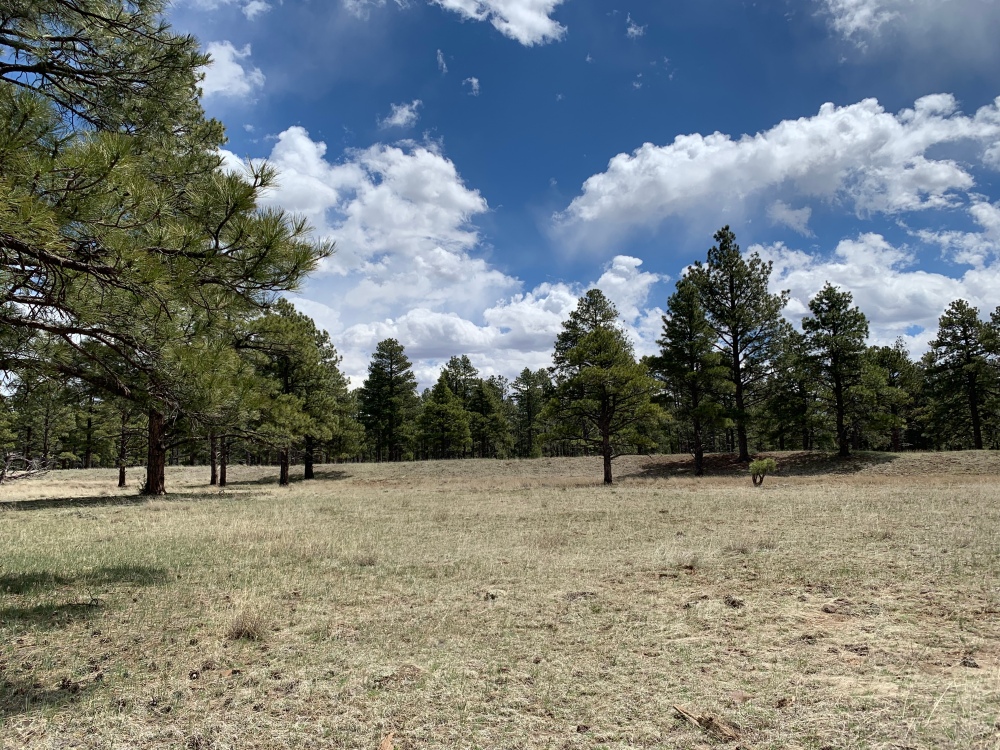 We took a lunch break in a wide open filed with a nice view of the San Francisco peaks. We were getting closer. 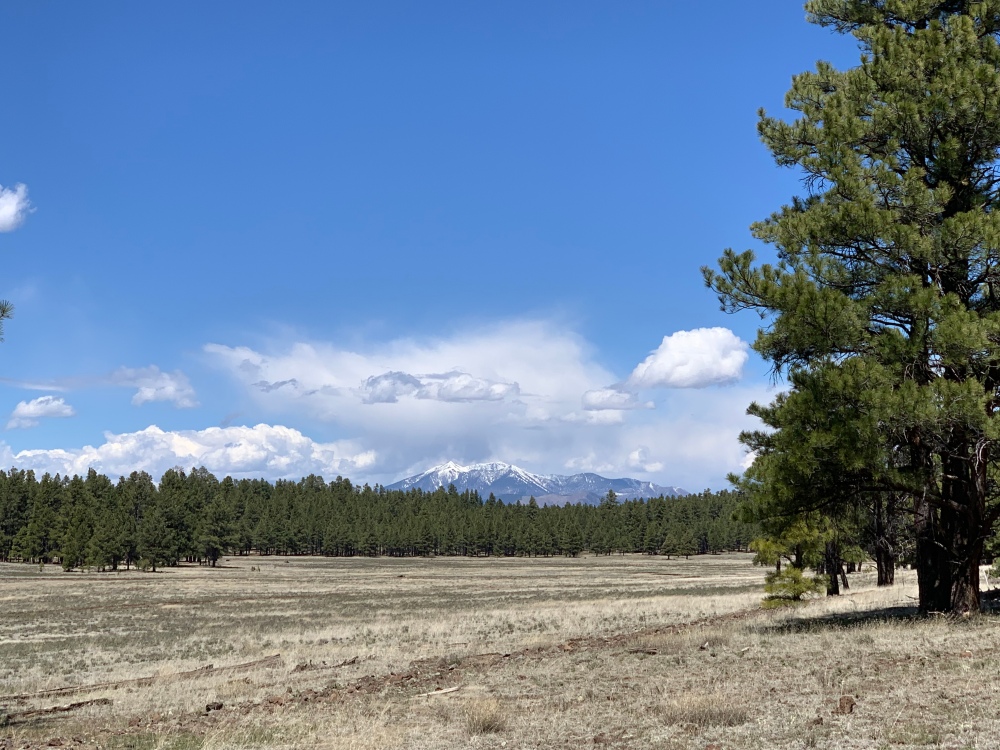 We passed a scenic tank before filling up at the next one, Horse Lake tank. It was windy, which was making the water a little silty, but we yet again, got another nice view of the mountains. 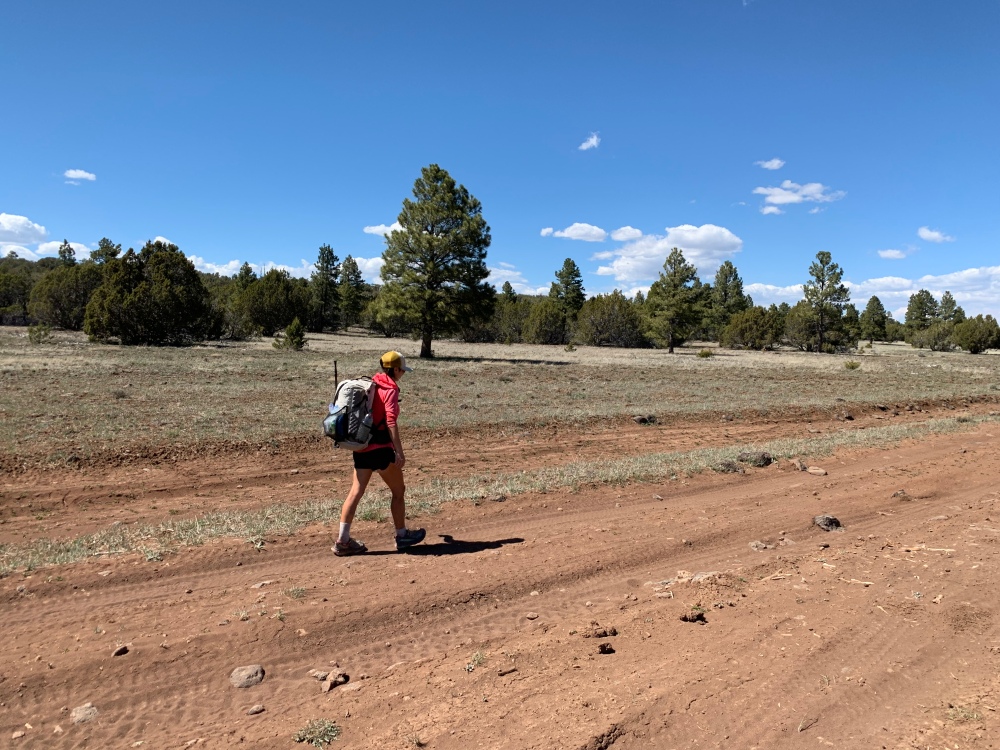 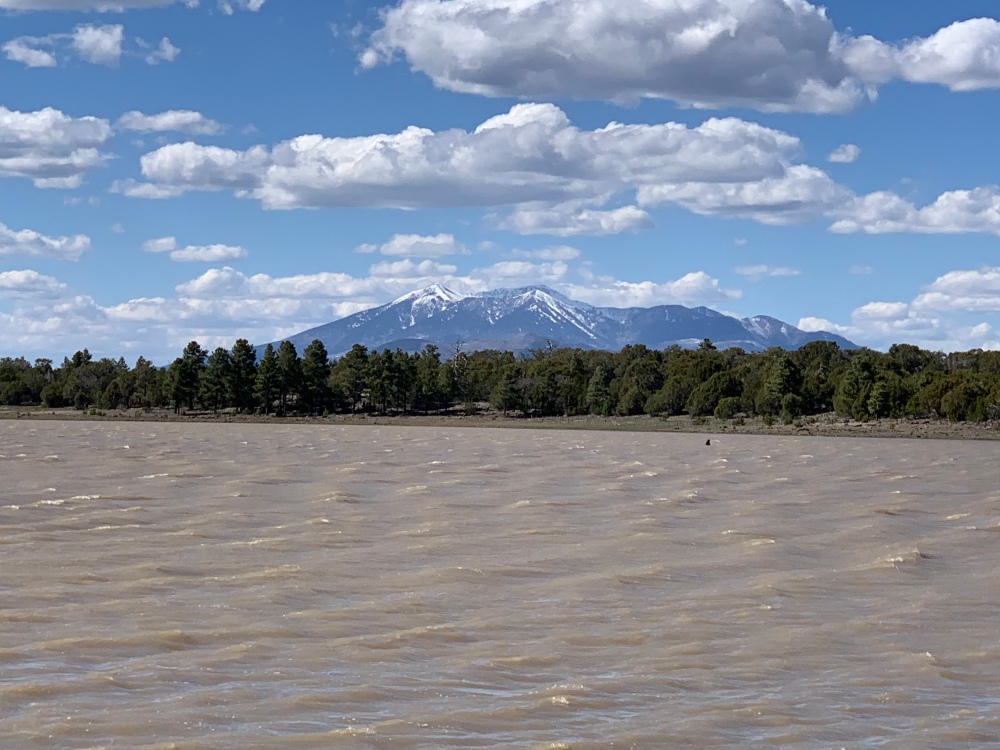 Once we got out of the wind by the Lake View campground junction, we took another break. As we hiked on, a herd of at least 50 elk crossed our path. It was pretty incredible!

Then the scenery would continue to impress with more mountains and a view of Lake Mary. 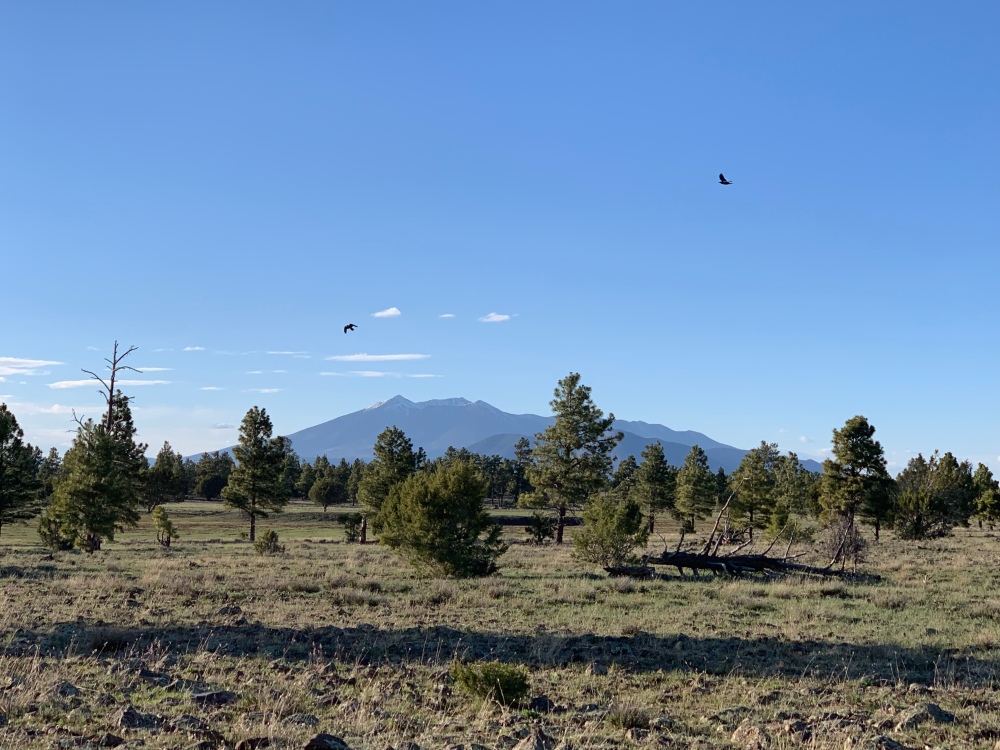 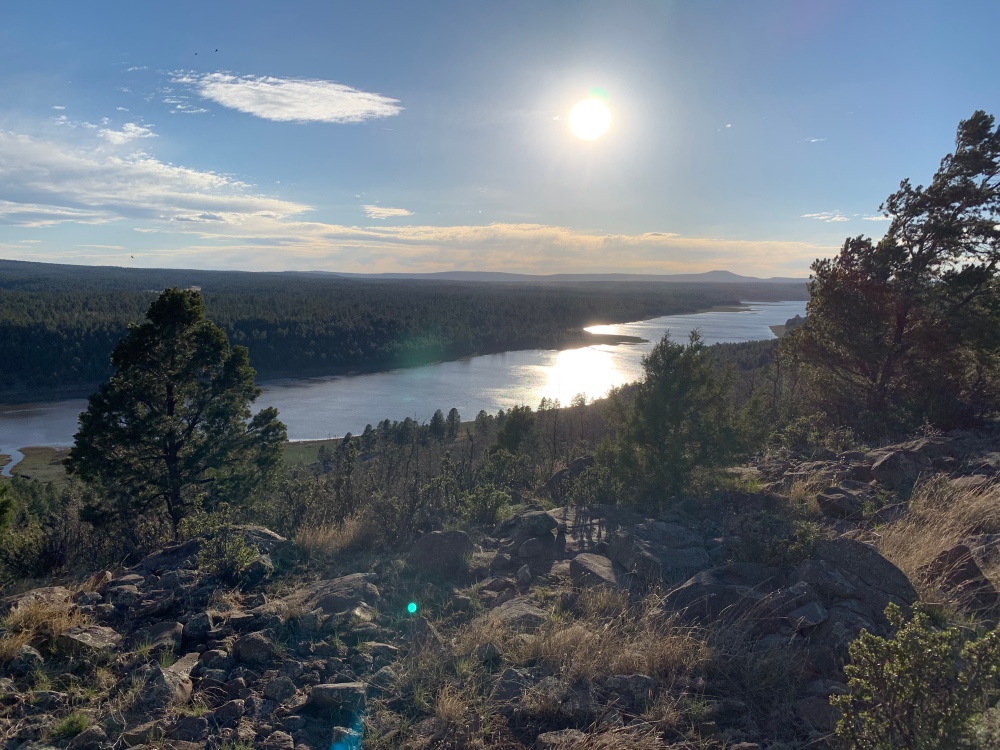 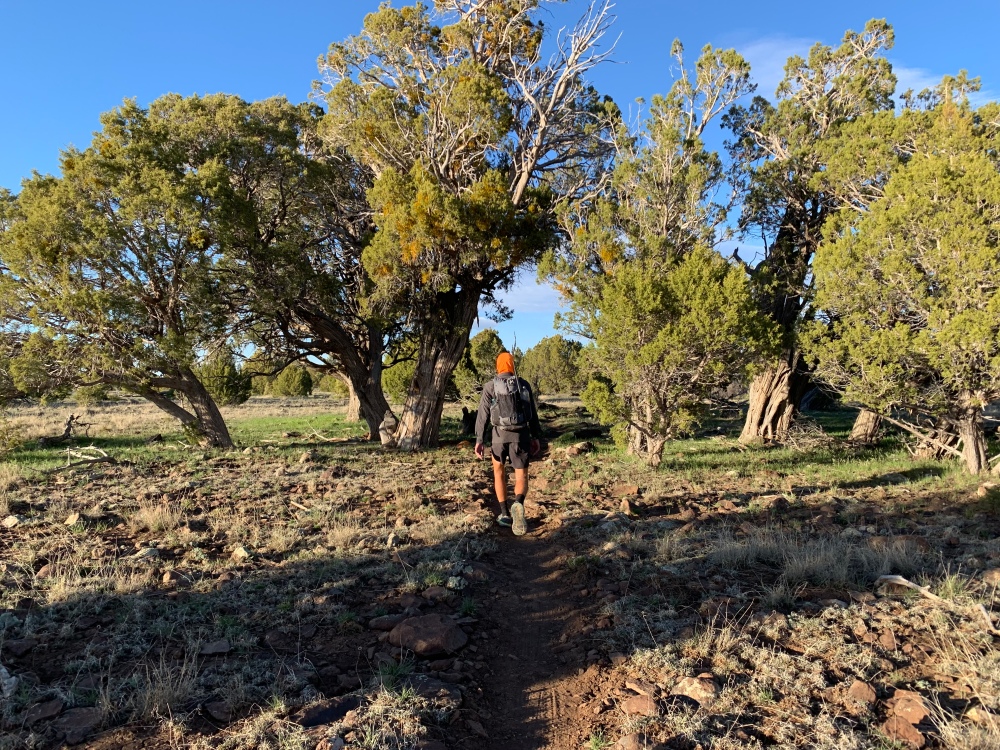 We passed Prime Lake which was too muddy to access the water, then camped near mile 557.7. 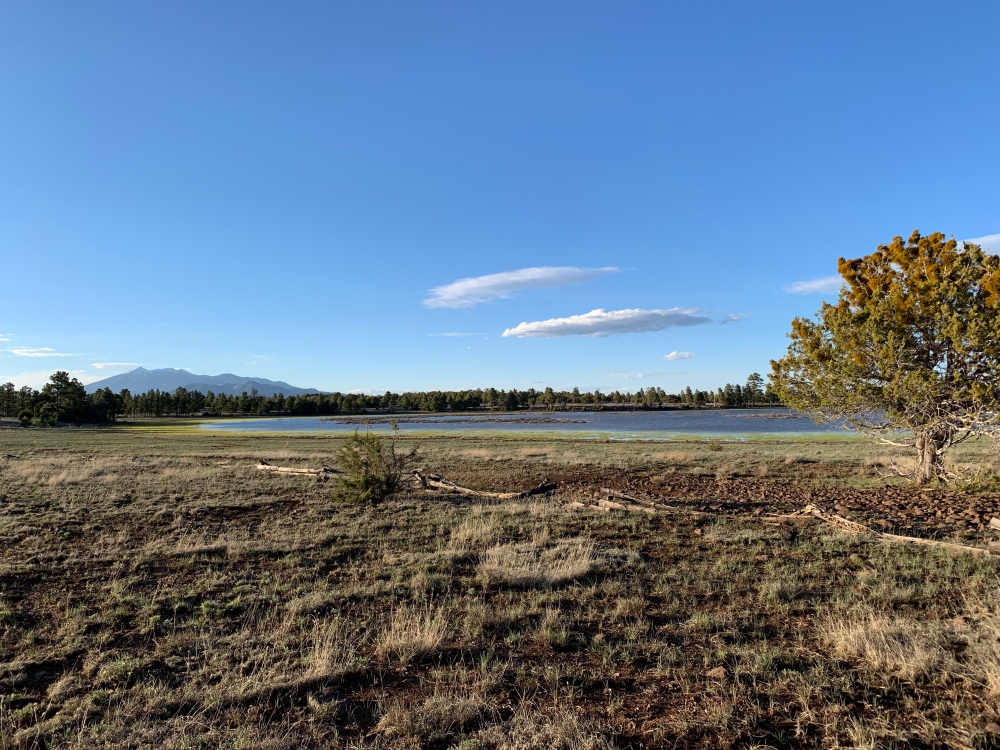 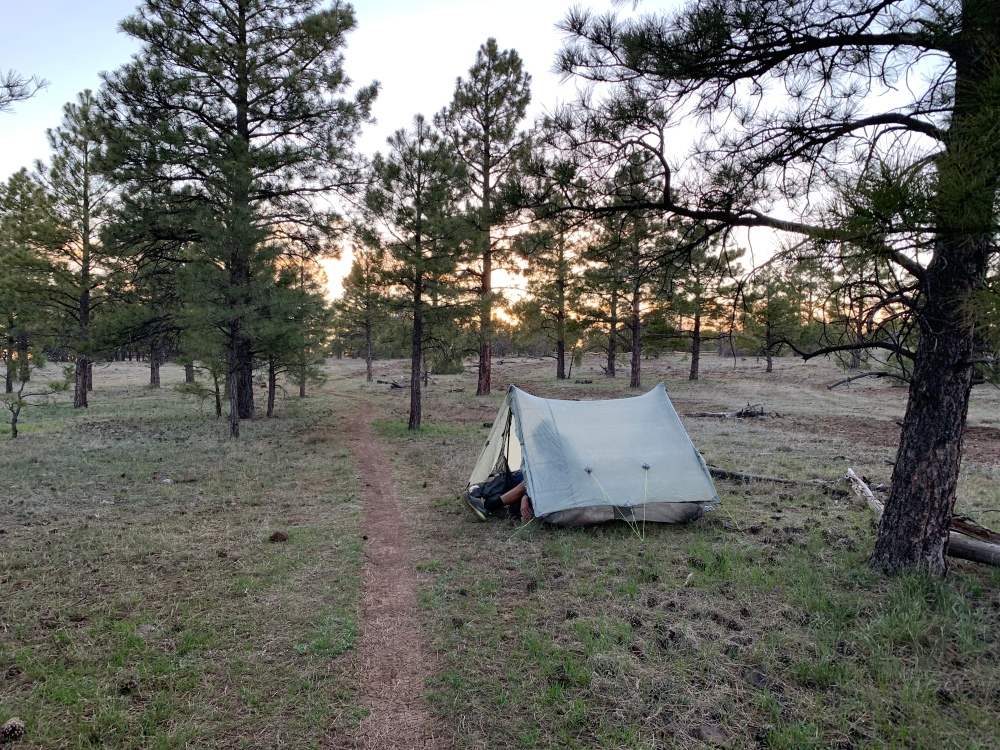 We would have a minor disturbance early in the night. Three cars were driving in circles in the parking lot and one of them, a large truck, had people who got out of the vehicle and shined a spotlight on our tent. Nothing became of it fortunately!

Jump Ahead to The Arizona Trail: Part 29

Jump Back to The Arizona Trail: Part 27