Hung out with the creatures of the night just before touching Waterton, then tripped out over the #pacificnorthwesttrail all the way to Chief Mountain. That about sums up the end of the #cdt2021 Now it’s time to finally knab that 👑 👑 👑 on the #pct2022 Hammer down!
Round 2 of wild and epic #glaciernationalpark It started to get smoky near the end, but this place was still stunning. 🤩
It’s that time of year! Hiking season is about to begin, and I just realized I never posted any pictures of #glaciernationalpark from last year’s trek. Here’s round one of one of my favorite places. Glacier got #grizzlybear, bighorns, swamp donkeys, and views for days! 😍
After spending a little too long out in the so-called “real world”, it was so damn refreshing to meet up with some of my tribe for a multi-day hike on my home trail. To those CDT tram members who couldn’t make it out, you were truly missed and gossiped about… A LOT! 😂 But I’m hoping some of you cross paths with us on the PCT later this year. Good luck Tapeworm on making it over halfway on the AT. 🔥 Enjoy the north. RIP The Doyle. You will do well I’m certain, but I’ll miss the glorious shitshow you once were. How the trail has changed! 🤯
I did a thing today. Probably won’t do it again. But I also said I wouldn’t run 13.1 miles ever again, sooo… 🤷🏻‍♀️Thanks @trevtrevorwhatever for the support, and super rad to catch up with you @wildturkeytrotsthru Thanks for the hospitality!
9/9/21 - Mission Accomplished! 🤘
Montana! You pretty!
Yet again, Montana brought the hiker friendliness in Augusta, and a sweet sunset too! Once we were able to force ourselves to leave, we were off to “The Bob” and finally got to see the Chinese Wall. We’re officially in the heart of grizzly country, y’all! 🐻
The sweet views continued all the way to Augusta!
Posted on May 17, 2019December 28, 2019 by Stubbs

We passed Barrel first thing in the morning, who fortunately got off the mountain before the thunderstorm hit. We thought that we had seen our last view of the San Francisco peaks, but they would remain visible in the distance at our backs.

We continued the long, long dirt road walk, being passed by ranchers wearing cowboy hats in trucks, and walking by curious cattle. Two southbound section hikers with ginormous backpacks stopped to tell us they left a water cache ahead, and to ask us how we got our packs so small. We wouldn’t get any water since a section hiker ahead of us named Brooke got to it first. We hoped that there was water at Lockwood Tank ahead.

It took a minute to locate the tank, but we found it and there was water. Fortunately Frisbee was with me, otherwise it would have been completely impossible for me to reach it. Short people problems.

We ate lunch cautiously near the vocal bulls that resided there. One of them crested the hill, toppled down it, then returned to the top and stared us down. It appeared to be kicking up dirt at us, so we relocated our stuff to a nearby fence. After watching him a while, it looked more like he was kicking up dirt on himself, probably to cool down. All of the bulls seemed distressed and thirsty. I felt bad for them.

We entered Kaibab National Forest and passed by Brooke once again who was hiding in the shade. We then took a couple short breaks before we got to Russell Tank. There was a sign just before it alerting hikers and turkey hunters of some prescribed burns that were going to take place. 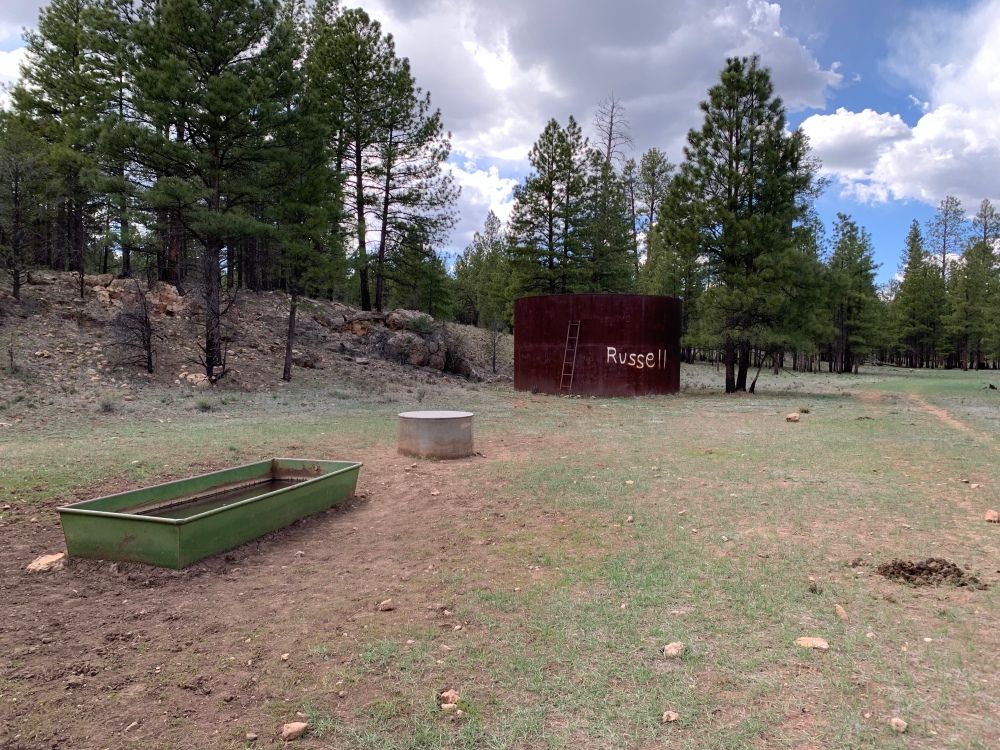 When we got to the next tank, which was more like a small lake, we decided to do some night hiking to make it to the lookout tower and closer to Grand Canyon National Park. My blistered feet were bothersome, but we both wanted to do more miles. 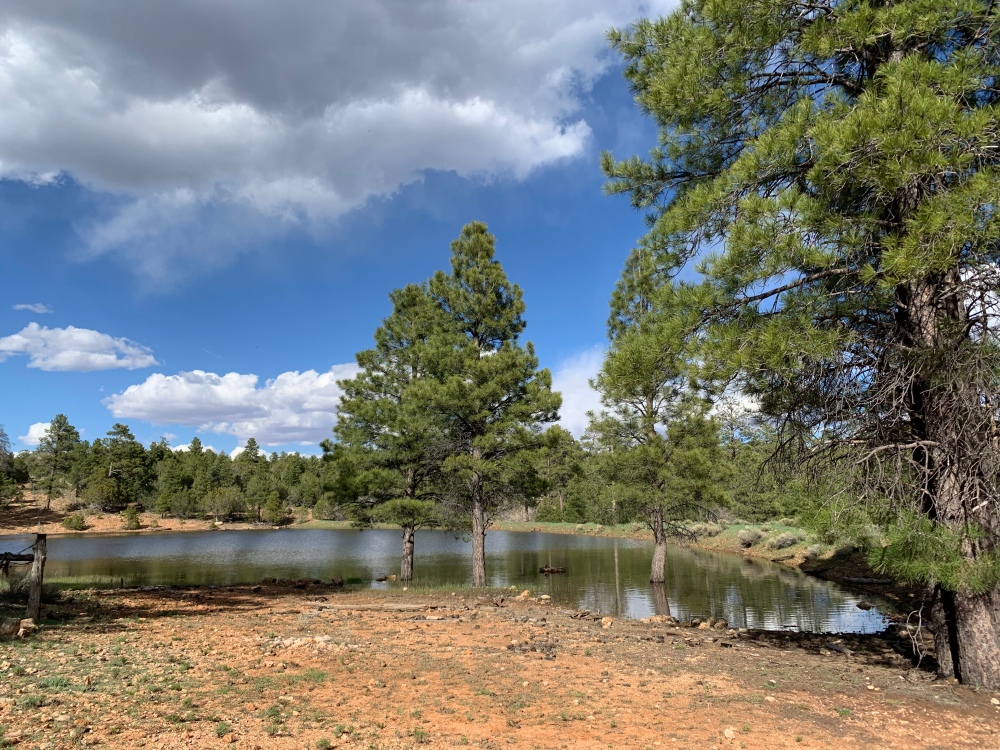 During the rest of the hike, we’d catch glimpses of mountains, canyons, and hills covered in pines. 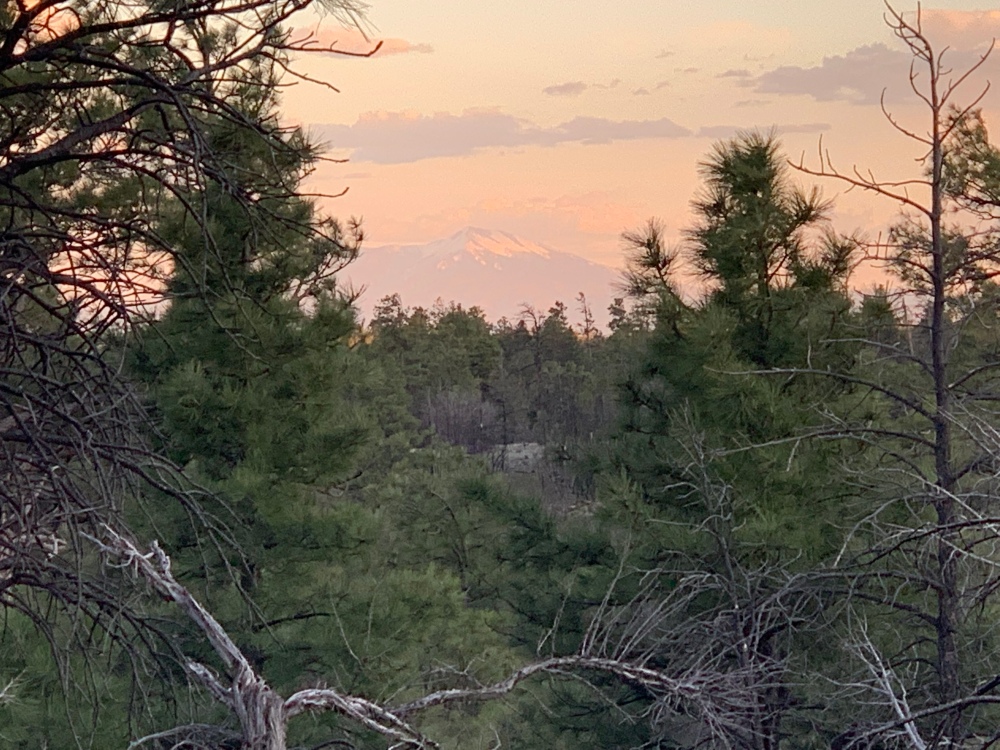 As it began to get dark, we put on our headlamps and ended up passing several camp fires and parked cars. We were approaching a campground. Eventually we made it to the Grandview Lookout Tower.

We cowboy camped a few yards from it, and found it funny that we were somehow undetected. Three guys with flashlights decided to climb it right after we set up, and a couple girls went to the nearby pit toilet. They all flashed their lights on us, but never saw us. 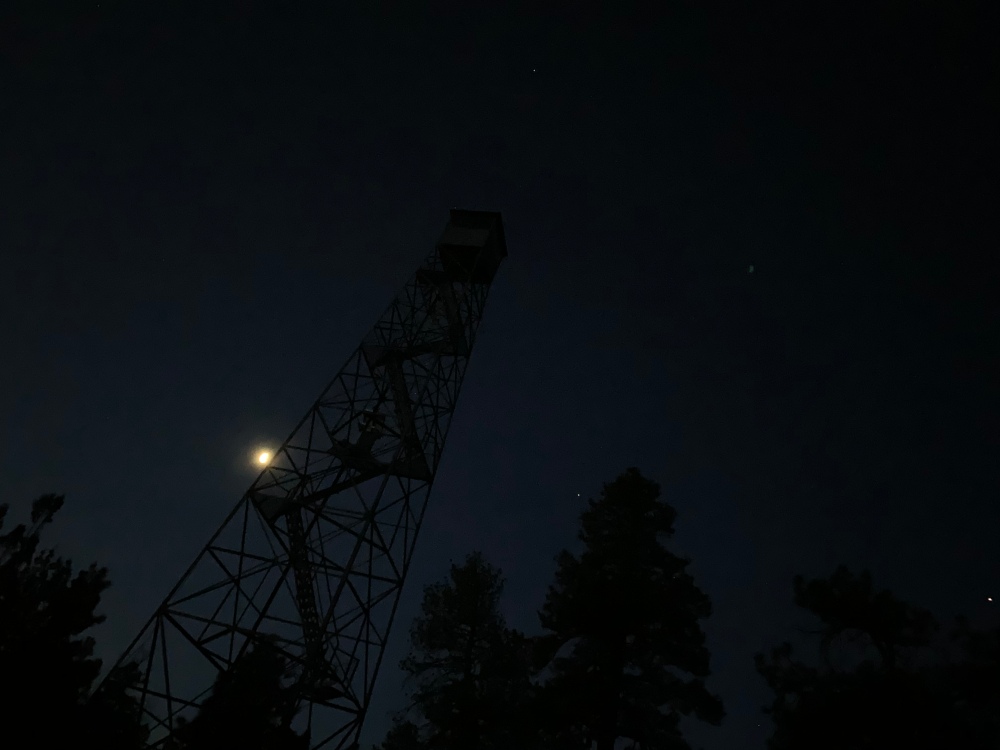 We stared at a dark sky blanketed with stars as we dozed off. It had been a long day, but we were right where we wanted to be.

Jump Ahead to The Arizona Trail: Part 34

Jump Back to The Arizona Trail: Part 32