Hung out with the creatures of the night just before touching Waterton, then tripped out over the #pacificnorthwesttrail all the way to Chief Mountain. That about sums up the end of the #cdt2021 Now it’s time to finally knab that 👑 👑 👑 on the #pct2022 Hammer down!
Round 2 of wild and epic #glaciernationalpark It started to get smoky near the end, but this place was still stunning. 🤩
It’s that time of year! Hiking season is about to begin, and I just realized I never posted any pictures of #glaciernationalpark from last year’s trek. Here’s round one of one of my favorite places. Glacier got #grizzlybear, bighorns, swamp donkeys, and views for days! 😍
After spending a little too long out in the so-called “real world”, it was so damn refreshing to meet up with some of my tribe for a multi-day hike on my home trail. To those CDT tram members who couldn’t make it out, you were truly missed and gossiped about… A LOT! 😂 But I’m hoping some of you cross paths with us on the PCT later this year. Good luck Tapeworm on making it over halfway on the AT. 🔥 Enjoy the north. RIP The Doyle. You will do well I’m certain, but I’ll miss the glorious shitshow you once were. How the trail has changed! 🤯
I did a thing today. Probably won’t do it again. But I also said I wouldn’t run 13.1 miles ever again, sooo… 🤷🏻‍♀️Thanks @trevtrevorwhatever for the support, and super rad to catch up with you @wildturkeytrotsthru Thanks for the hospitality!
9/9/21 - Mission Accomplished! 🤘
Montana! You pretty!
Yet again, Montana brought the hiker friendliness in Augusta, and a sweet sunset too! Once we were able to force ourselves to leave, we were off to “The Bob” and finally got to see the Chinese Wall. We’re officially in the heart of grizzly country, y’all! 🐻
The sweet views continued all the way to Augusta!
Posted on May 28, 2019December 28, 2019 by Stubbs

After the freaky incident we had earlier in the morning, we were incredibly relieved to make it to Jacob Lake safely. We were ready for breakfast! The waitress was really sweet and asked us a lot of questions about our journey. She’d have more input as other hikers started rolling in. First it was Coati and Radar, who we were surprised to see since we never spotted them at Cottonwood campground. They told us about their nightmarish experience with the ranger at the Backcountry office.

When it was their turn in line, they had to talk to the other ranger at the desk. They asked for a thru hiker permit for the following day, and the lady rudely told them they were booked up and wouldn’t be able to get one for the next few days. They told her that they were on a deadline, hoping she would approve of them sleeping at the empty stock yard like the rest of the thru hikers, and she told them ‘too bad’. She suggested they suck it up and hike rim to rim. On top of that, she informed them that they were absolutely not allowed to camp on the north rim which was currently closed, and they had to hike completely out of the park or they’ll be fined. A stretch that she felt they would have no problem doing, all while mocking their large backpacks. So what did they do? The two of them hiked about 35 miles in and out of the Grand Canyon past the park boundary, mileage that they usually come nowhere close to, even on flat terrain. To add insult to injury, they said they saw the same ranger when they got to the north rim and she was all smiles, apparently having a much better day. I felt bad for them. They’re such a sweet couple.

We would also have the honor of meeting One Gallon who was hiking the treacherous Hayduke Trail. He is one of four current ‘Triple Triple Crowners’, meaning he’s hiked all three major long distance trails: the Appalachian Trail, Pacific Crest Trail, and Continental Divide Trail, THREE TIMES EACH! He was a lot of fun talking to and very modest regarding his amazing achievements. He’s hiked a lot of other trails on top of that.

After eating and resupplying, we caught a hitch from a couple of European tourists, then began our journey to the northern terminus! We probably hiked about 4 miles before stopping to dry out our damp gear and to eat lunch. By 12:30 pm, we were back at it.

Our hike continued to be mellow. We walked through a wide open field scattered with sage brush with a view of mountains in the distance. During this stretch, I was confronted by a man on a horse. I did my best to yield to them and get out of their way, but I still managed to spook the horse. I think it was blind in one eye. I wasn’t sure whether or not to take offense to the rider’s comment.

“She thinks you’re a monster.” 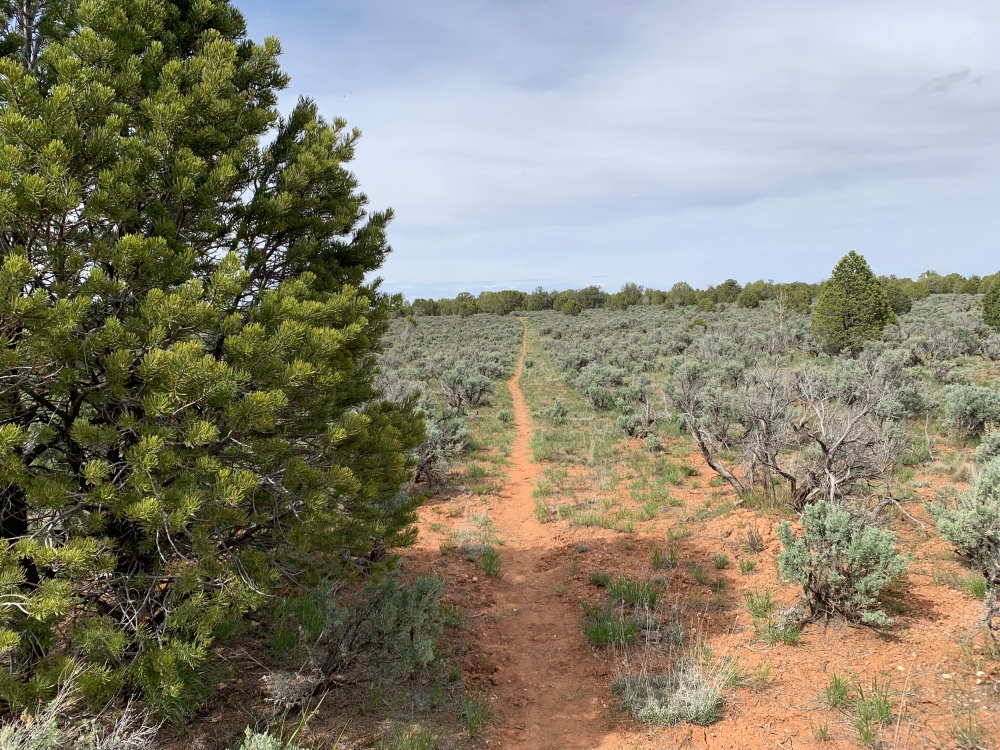 The two of us met back up at Winter Road Trailhead to eat dinner, our last meal before completing our thru hike. Then we’d pass through our last gate, wave at our last wildlife camera, pass our last dried up animal rib cage, and dodge our last cow patty. 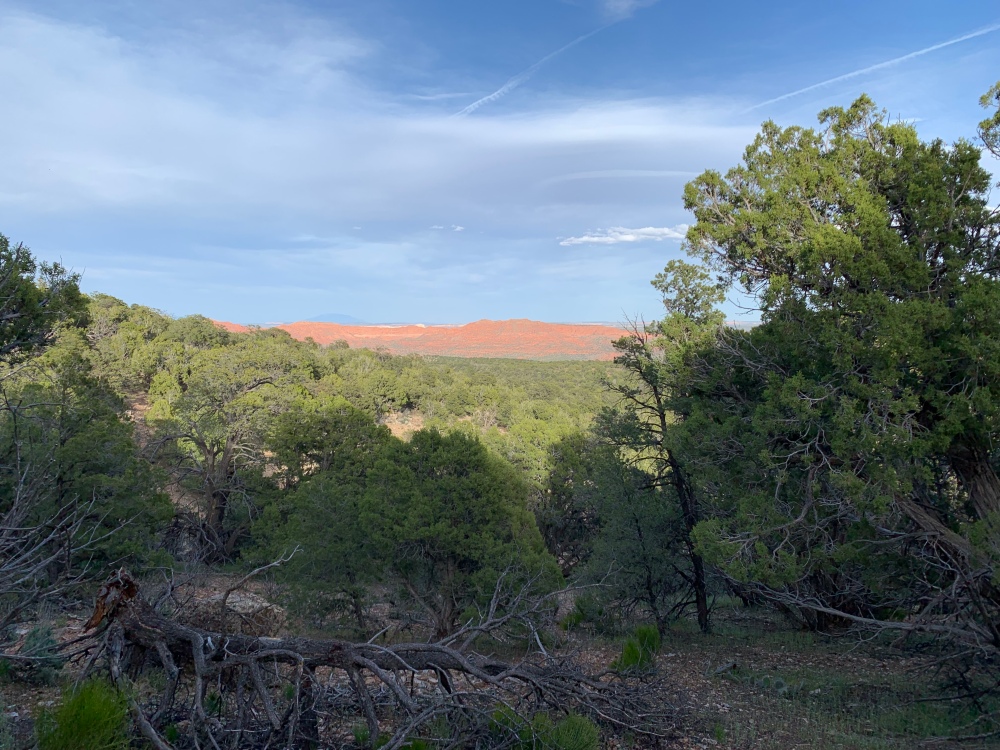 As we got closer, I stepped out of the way of a passing mountain biker. He high fived me and cheered, “You’re almost there!” Frisbee and I met at the last Wildlife Tank where we filled up on water. The sun was setting as we made our way down to the finish line.

We were hoping to make it to the monument before it got too dark. We even did some trail running to increase our odds.

We didn’t make it before sundown, but no big deal. We made it to the northern terminus by 7:50 pm. The 800 miles of Arizona Trail had been a lot of fun, so it was a bittersweet ending. The nearby campground was filled up, so we made ourselves comfortable under the pavilion.

We’d get someone to take our group photo in the morning, then the adventure out of the desert began.

Jump Back to The Arizona Trail: Part 39