The Cirque of the Towers Route left me speechless. 😶 All the views. ⛰ All the #rainbows . 🌈 All the #lakes . 🏊🏼 The Winds have stolen my heart. 😍
Had a good time in #lander then a horrible time back on trail climbing over the worst blowdown section I’ve ever crossed through. 😖 Our group got separated in the mix. The days that followed would make up for the headache. The Cirque of the Towers Route was amaze balls! 😍
The Basin. Pretty much just vast nothingness, a few pronghorn, and lots of cows. It was mostly dry and hot, although we did experience some thunderstorms. Also, my oxen broke a leg 🐂 and I have died of dysentery on the Oregon Trail.🤠 These things happen. 🤷🏻‍♀️
We hitched back from Encampment and accidentally camped on private property. 😬 Fortunately, the guy wasn’t mad when he found out we were CDT hikers and let us stay. Our views were hazy due to the wildfire smoke. 🔥 We passed through the affected area two days prior! A road walk to Rawlins followed, and we found ourselves herding cattle and dodging cow diarrhea. 🐂 💩 I was relieved to lay in a bed after inhaling some town food. I’ve been battling some nasty sciatic pain and blisters. Hiking through the basin wasn’t going to be too helpful.
One more state complete! Colorado was a blast and it was great to spend the last few days there with fellow AT hikers. Thanks again for the trail magic and the hospitality, @robinurthoughts and @urmygirl_blue You guys rock! Our #tramily has grown from 4 to 8 and we’re ready to take over Wyoming! Hammer down! 🤘
We destroyed some food when we reached Grand Lake. The damage from last year’s wildfires caused us to miss out on the bulk of the Rocky Mountain National Park section, which sucked. We also had to maneuver through many blowdowns, but the views during the climb up and down Parkview Lookout were amazing! The next day, we tackled a 37.4 mile day and made it to Steamboat Springs for the holiday weekend! 💥🇺🇸 🍔 Next stop, the Colorado-Wyoming border! 🤘
Sooo… we had to hike out of Winter Park otherwise we were gonna have to apply for employment. It was time! We weren’t too keen on hiking on top of mountains during a lightning storm, nor were we thrilled about the “impassible” blowdown section ahead. So instead, we connected the road from Berthoud Pass to the Fraser River Trail to the Fraser-Granby Trail. There was a lot of cool art, signage and wildlife along the way.
The climb to #grayspeak #summit was brutal, especially while having some of the worst altitude sickness in my life. 😵‍💫 But I fought off the nausea, gave my legs a pep talk and conquered my second 14er. The views were motivating, and the knifes edge before the final climb was awesome aside from the wind blowing me around like a plastic bag. The icing on the cake was seeing mountain goats during the hike down! ❤️
I was stoked to finally leave the very groomed Colorado Trail section so I could experience some new terrain. We had some big climbs, but we were rewarded with great views!
Posted on June 3, 2019June 11, 2019 by Stubbs

After running around Crazy House, we walked through town where we were surrounded by flowers. I enjoyed the smell of the pine and juniper needles. The nice aroma was short lived, and transitioned into the smell of swampy water and decomposing plant matter as we approached the lake. During our stroll, we watched people floating around in swan boats and admired the futuristic architecture. 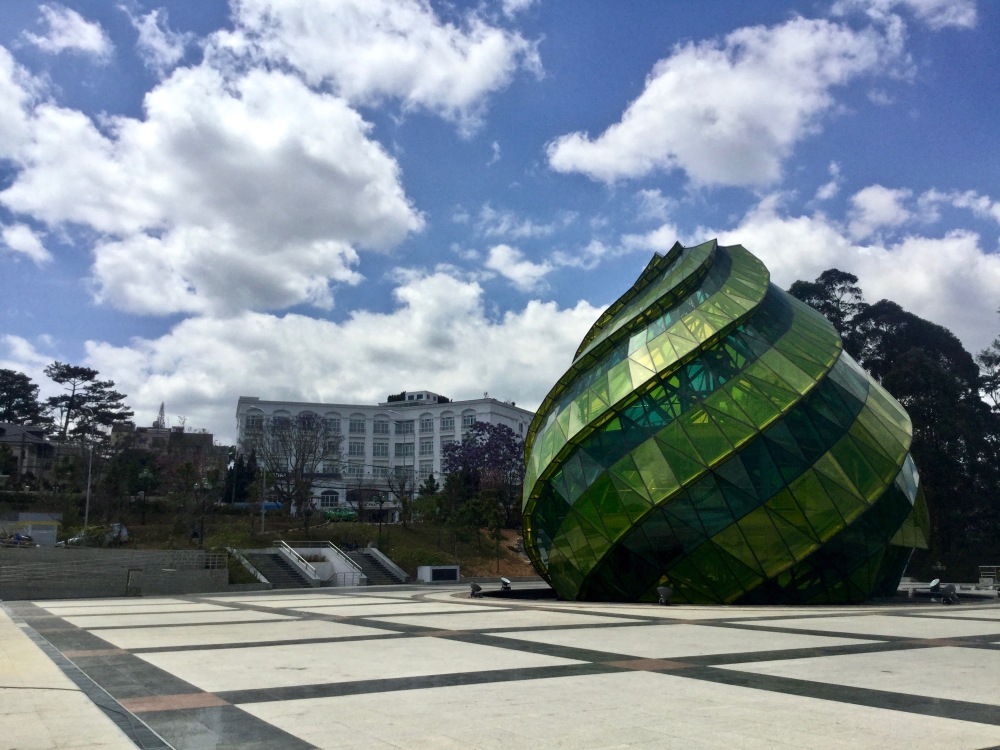 We scanned through the market where the baskets of bright, red strawberries were making me hungry. I’d be happy that I didn’t purchase any since Dien would later tell us that the food wasn’t always fresh, and that some tourists got really sick after eating there recently. 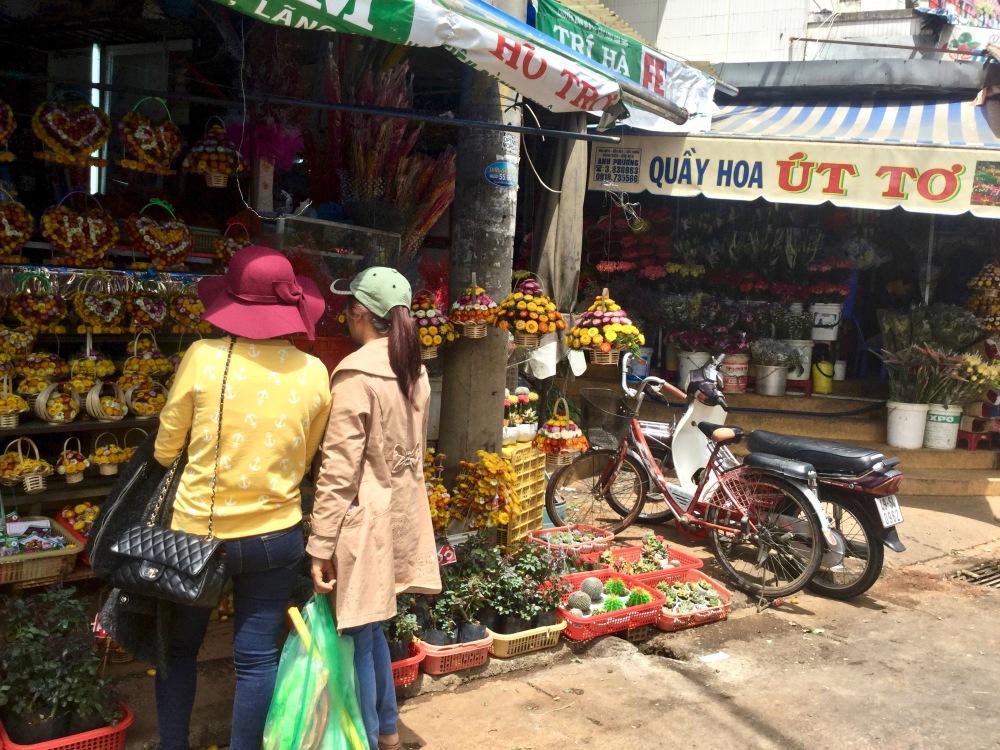 We sat down at “Quan Restaurant” nearby which had some interesting items on the menu, such as turtle, snakehead and pigeon. We played it safe with Banana Flower Salad and Singapore rice noodles.

Back at the hotel, Dien shared tour information with us, suggesting we take the public bus to Elephant Falls where there was also a Big Buddha at the pagoda nearby. As we were chatting with Dien, two guys from New Zealand that were motorbiking across the country walked in, and asked her about some suggestions on places to stop up north. This was the direction we were also heading, so we decided to listen in on the conversation. One of the places she mentioned sounded nice and was about halfway to our next destination in Hue, so we decided to book transport and a night in the beach town of Quy Nhon (pronounced “hwee nyah-n”).

We’d head back out again, this time walking towards Da Lat Flower Park on the other side of the lake. We’d get into a ‘Punch Buggy’ battle on the way, and probably looked like fighting nun puppets. I noticed we gave some people a few laughs. The park cost money to visit, so we settled for the free Bonsai tree garden in the much smaller park across the street. We wouldn’t be disappointed! Coming from someone who lacks a green thumb and who manages to kill low maintenance plants like aloe vera and lucky bamboo, I was impressed! Some of them looked like little forests. 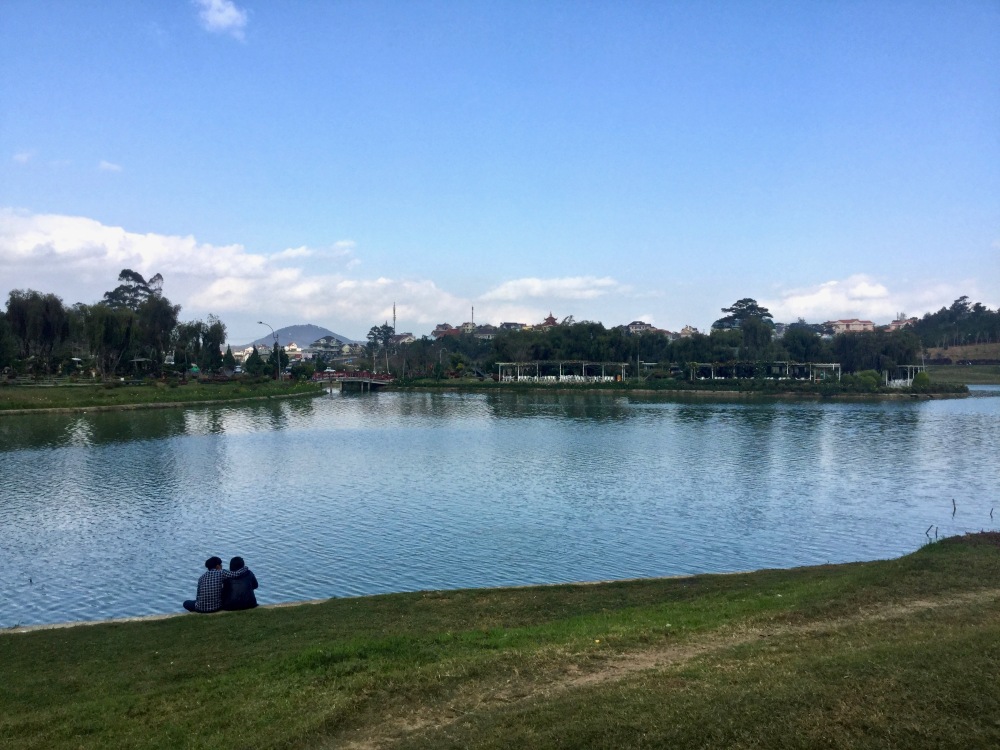 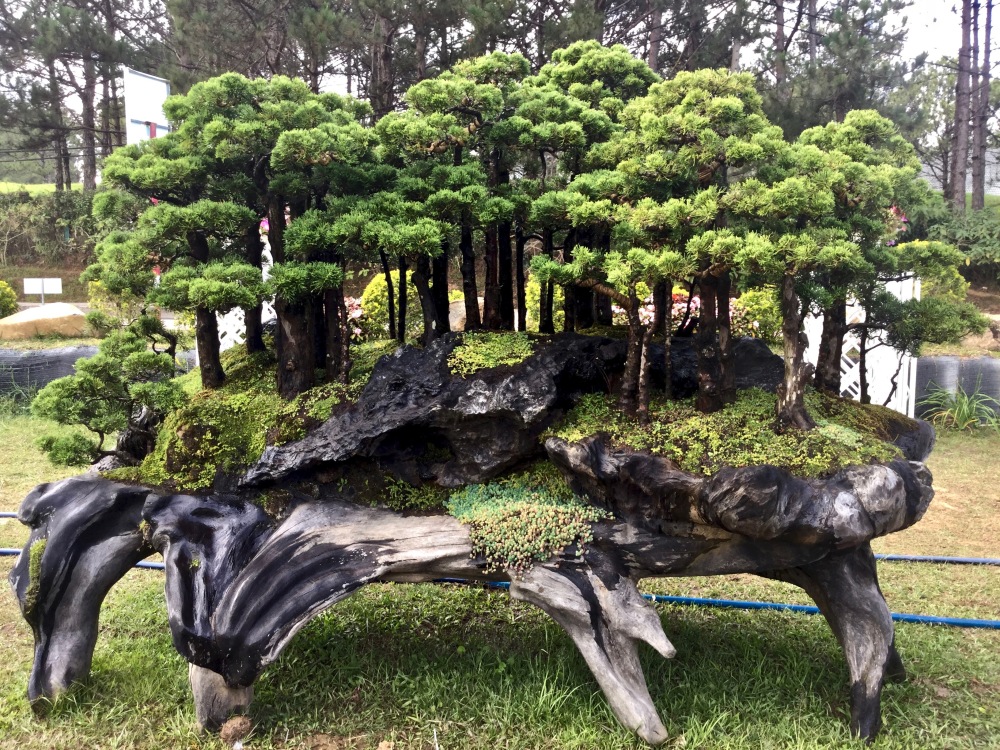 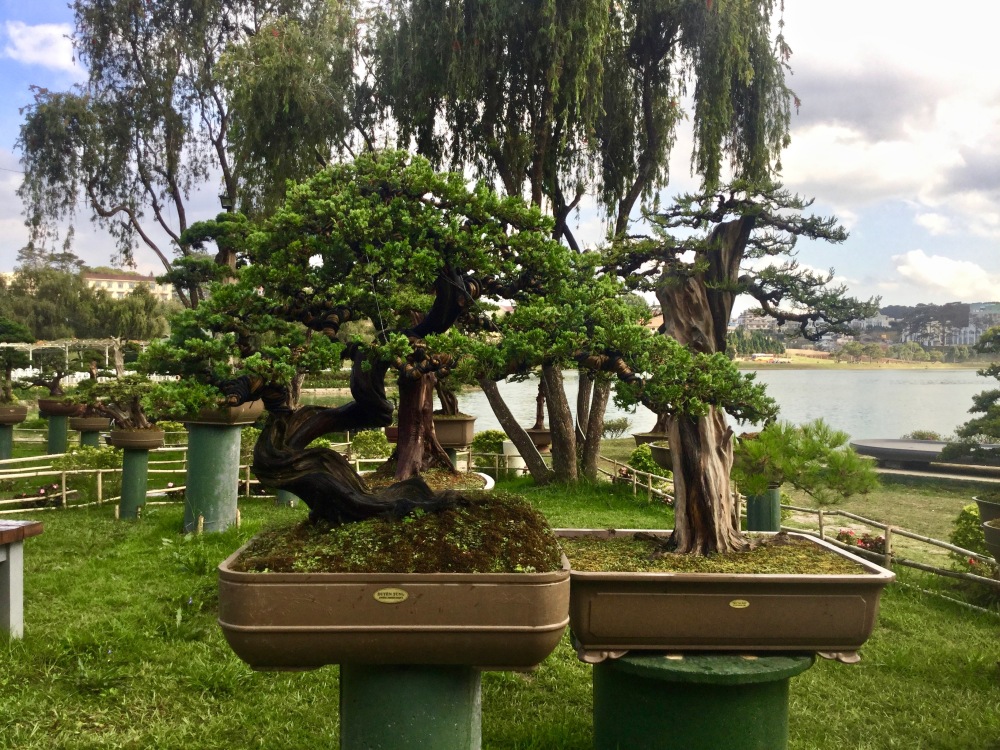 Our little run in with the guy blowtorching the dead dog had us feeling a little less adventurous in the meal department, so we were searching for a restaurant with an English menu to avoid any unwanted surprises. The only one we found didn’t have any vegetarian options, and seeing mudskipper on the menu was a little bit of a turn off, so we kept searching.

As the search continued, we got hungrier and hungrier and less finicky. So we settled on a little Japanese place called “Yatai Quan.” The Ramen with Pork and Boiled Egg was great! Trevor enjoyed his meal too, a salad with pork and shrimp.

We decided to give up on a strict vegetarian diet the remainder of the trip. The language barrier made it too difficult, even with all the apps I had downloaded on my iPod. Besides, shortly after we’d return home, we weren’t going to be sticking to it once we started our next journey on the trail.