9/9/21 - Mission Accomplished! 🤘
Damn Montana! You pretty!
Yet again, Montana brought the hiker friendliness in Augusta, and a sweet sunset too! Once we were able to force ourselves to leave, we were off to “The Bob” and finally got to see the Chinese Wall. We’re officially in the heart of grizzly country, y’all! 🐻
The sweet views continued all the way to Augusta!
Had an awesome birthday which I celebrated with my stinky, freeloading #hikertrash tramily, the wonderful people of Lincoln, and Daryl the Sasquatch. The hike from Rogers Pass was just as amazing as the hike into it after we hunkered down in a yurt to avoid the rain. More climbs, but a lot of ridge walking by rock ledges and towers.
No more smoke, but the days have been windy and the nights have been cold. We visited an amazing outfitter in the middle of the trail, got to see Golden, a familiar face from the AT (2016), and lots and lots of cows! I had been in a bit of a funk lately, but the ridge walk right before reaching Rogers Pass snapped me out of it!
Got stuck in the Butte vortex. We hitched in, hitched out, hiked to the north side then hitched back in. Pizza Ranch was our second home. Eventually we made our way to Helena, our second vortex. Before our arrival, we got pounded by hail and rain. The wind was blasting through the trees so hard, they were snapping like twigs behind us. The people of Helena were beyond hiker friendly. We got stuck a second day when a girl working at the brewery let us crash at her place for free, hot tub included! Life’s good!
The road walk continues. Nevada City to Twin Bridges to Silver Star to Butte! Time for a couple zero days!
Most of us had trouble getting the Big Sky Alternate maps, so we’ve been road walking. These things don’t bother me as much as most people. Road walks can be pretty fun! We’ve been bouncing town to town: West Yellowstone to Big Sky. Big Sky to Jeffers. Jeffers to Ennis. Ennis to Virginia City to Nevada City, and still rolling! Our end goal is to get to Butte, finally do some laundry, get showers (cuz we smell like sweaty buttholes), then return to the CDT to crush those last few hundred miles. It’s been fun making friends with the locals, and it’s also been more scenic than expected!
Posted on June 11, 2019December 28, 2019 by Stubbs

We really enjoyed our stay at the cabin and got to meet the caretaker and badass, Sonny Eberhart aka Nimblewill Nomad, before we left.

Nimblewill is a triple crowner and has hiked the entire Eastern Continental Trail (ECT), two impressive accomplishments that I hope to match one day.

We took a short walk down the road to the trail, and I was giddy! This all felt very new, but also familiar. We weren’t on the Appalachian Trail (AT), but we were traveling along the same mountain range. Some consider this section of the Appalachian Mountains the unofficial start of the AT.

With the humidity in the air and the smell of leaf litter and pine needles, it felt like being home. I was enjoying myself in the “green tunnel” until I was quickly reminded why I always wear my hat backwards while hiking in the Appalachians. While walking across a small stream staring at my feet, I plowed my head into a low hanging tree right as Frisbee was in the process of warning me. He told me it made quite the loud “thud.” I shook it off and kept hiking. I have all the grace and agility of a toddler.

We took a short break at Weogufka Shelter which had some questionable items left behind inside, then continued hiking until we reached the village of the same name. 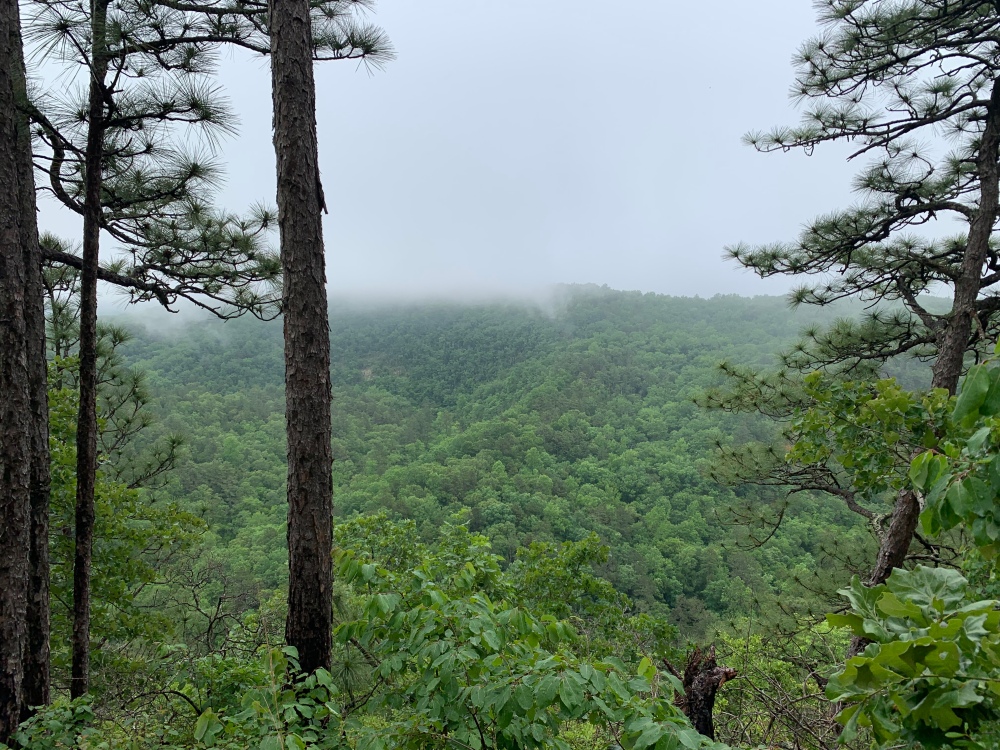 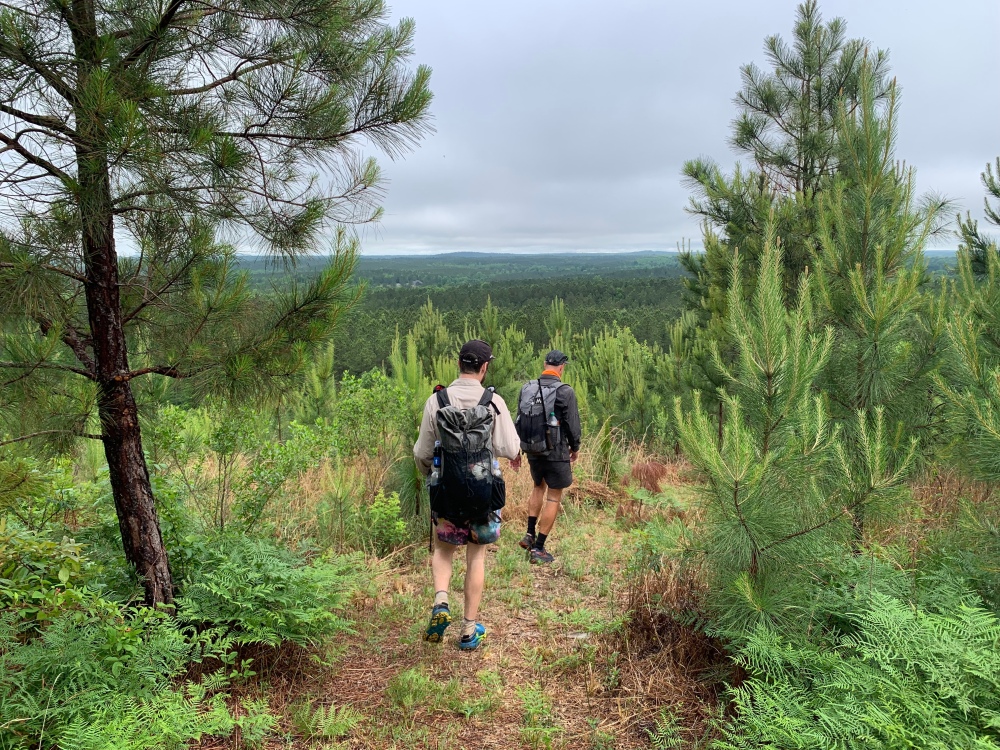 One of the first non-residential buildings you see in Weogufka is the Second Baptist Church, which humored me in a dumb way. Call me feeble-minded, but in all the Southern towns I’ve been in, I’ve only seen the First Baptist Church. You would think with all the churches located within a short radius of the heart of any small town along the Bible Belt, that you would see it more often. I guess no one wants to be “second rate.”

I pointed out my petty delight to my unamused husband, Frisbee. “Look! They DO exist!”

We headed over to Caperton’s where we were hoping to score a cup of coffee. No dice. It was closed. So instead, we sat out front and ate second breakfast, then headed towards the bridge that, according to our guide, was yet to be built. One of the hikers that commented about it mentioned that you would have to do a “boot scoot boogie down the shoulder” which had us questioning what we were in for.

Before we got there, we’d walk by the residence of Tammy, who runs Caperton’s. We got our picture taken, signed her book, and tried to pet her bashful dogs before making our way to the bridge. Fortunately for us, no “boot scoot boogie” was required. The bridge was complete!

There were dogs running around everywhere. On the Florida Trail, we had experienced loose dogs on the daily. Not many people supervise or fence in their dogs around these parts. Frisbee and I were used to it, and I’m a good read on dog body language after working with them for so many years, but I could tell this had Spacejam a little nervous. All the dogs, and the people that we came across were more than friendly though.

While traveling on a dirt road, we’d also come across flowers and cows. I’m not sure what they’re feeding the cattle around here, but they are HUGE!

We’d cross a small stream which my elegant ass stepped into before walking by a waterfall and a black snake.

When we returned to the road, a guy in a Jeep stopped to chat. His name was Nathan and he was part of the Pinhoti Outdoor Center. He and his wife do shuttle services and food drops for hikers, bikers, and paddlers and they were in the process of building a hostel.

Later we found a semi-flat spot to eat lunch, and a butterfly found my shoe irresistible the duration of our break.

The climbs continued with more road walking until we reached Stewartsville Cafe. We finally got our coffee fix, and also burgers for dinner. We lingered there longer than we should have, but eventually motivated ourselves to get moving, stocking up at the Dollar General before taking the long road walk passed many more churches, cattle, and loose dogs.

It began to drizzle and continued as we crossed several busy highways. It unleashed as we walked around Joy Lake towards Talladega National Forest. At that point, all we could do was laugh it off and make the best of it. We were drenched as we searched for a decent site to pitch our tent. Just as the rain stopped, we made it to Trammel Trailhead. “Screw it!” We were just going to set up in the parking lot. As I laid in the tent, I hoped that no drunk locals enjoying the start of the weekend plowed us over during the night.

Jump Ahead to The Pinhoti Trail: Part 3