After spending a little too long out in the so-called “real world”, it was so damn refreshing to meet up with some of my tribe for a multi-day hike on my home trail. To those CDT tram members who couldn’t make it out, you were truly missed and gossiped about… A LOT! 😂 But I’m hoping some of you cross paths with us on the PCT later this year. Good luck Tapeworm on making it over halfway on the AT. 🔥 Enjoy the north. RIP The Doyle. You will do well I’m certain, but I’ll miss the glorious shitshow you once were. How the trail has changed! 🤯
I did a thing today. Probably won’t do it again. But I also said I wouldn’t run 13.1 miles ever again, sooo… 🤷🏻‍♀️Thanks @trevtrevorwhatever for the support, and super rad to catch up with you @wildturkeytrotsthru Thanks for the hospitality!
9/9/21 - Mission Accomplished! 🤘
Montana! You pretty!
Yet again, Montana brought the hiker friendliness in Augusta, and a sweet sunset too! Once we were able to force ourselves to leave, we were off to “The Bob” and finally got to see the Chinese Wall. We’re officially in the heart of grizzly country, y’all! 🐻
The sweet views continued all the way to Augusta!
Had an awesome birthday which I celebrated with my stinky, freeloading #hikertrash tramily, the wonderful people of Lincoln, and Daryl the Sasquatch. The hike from Rogers Pass was just as amazing as the hike into it after we hunkered down in a yurt to avoid the rain. More climbs, but a lot of ridge walking by rock ledges and towers.
No more smoke, but the days have been windy and the nights have been cold. We visited an amazing outfitter in the middle of the trail, got to see Golden, a familiar face from the AT (2016), and lots and lots of cows! I had been in a bit of a funk lately, but the ridge walk right before reaching Rogers Pass snapped me out of it!
Got stuck in the Butte vortex. We hitched in, hitched out, hiked to the north side then hitched back in. Pizza Ranch was our second home. Eventually we made our way to Helena, our second vortex. Before our arrival, we got pounded by hail and rain. The wind was blasting through the trees so hard, they were snapping like twigs behind us. The people of Helena were beyond hiker friendly. We got stuck a second day when a girl working at the brewery let us crash at her place for free, hot tub included! Life’s good!
Posted on June 14, 2019December 28, 2019 by Stubbs

We crossed a creek with a pretty waterfall nearby as we hiked in the rain to Porter’s Gap. Spacejam would meet us in town later. 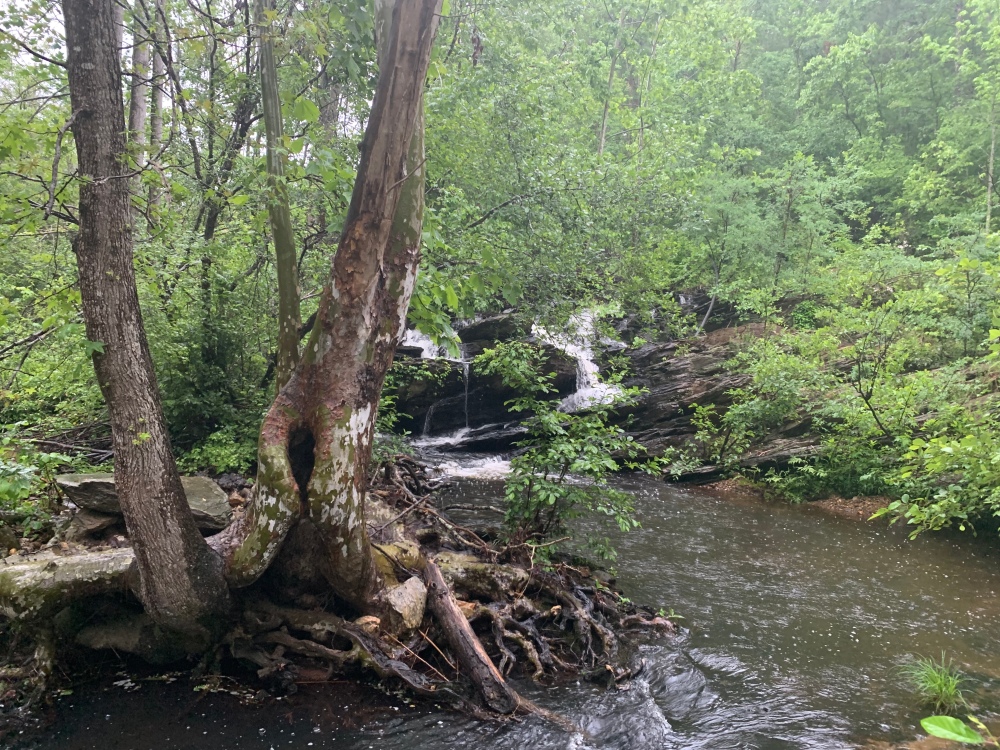 The rain started to let up as we got closer. When we got to Porter’s Gap, we started making an effort to hitch into Talladega, Alabama.

After numerous failed attempts, we got picked up by a man and his cousin. He told us that he normally doesn’t pick up hitchhikers, but when Frisbee held out his “prayer hands” begging for a ride, he said he couldn’t pass us up. They were unfamiliar with the Pinhoti, so we told him about the trail and our journey so far.

They dropped us off at Walmart and we walked down the street to McDonald’s to get second breakfast, suck up some free WiFi, and then call our moms. It was Mother’s Day. Spacejam would eventually catch up and meet us there. Frisbee and I decided to stay in town to dry out our gear at the nearby Super 8. Spacejam would decide to hike on. We couldn’t persuade him to stick around, so we told him we’d catch up with him later if he didn’t hike too far ahead.

We all resupplied at Walmart, and Frisbee and I checked into our hotel. We had a view of Spacejam standing on the side of the road from our balcony, working on hitching out of town. We playfully messaged him to “just give up” and “stay for the night”. Once again, our skills of persuasion were no match for his determination. After a long attempt, he got a local Trail Angel to shuttle him back.

The rest of the day was spent drying out our gear on the balcony, washing a few items of clothing in the sink, and lounging in our room, only leaving to eat spicy chicken and beans & rice at Popeye’s.

Jump Ahead to The Pinhoti Trail: Part 5

Jump Back to The Pinhoti Trail: Part 3

2 thoughts on “The Pinhoti Trail: Part 4”