After spending a little too long out in the so-called “real world”, it was so damn refreshing to meet up with some of my tribe for a multi-day hike on my home trail. To those CDT tram members who couldn’t make it out, you were truly missed and gossiped about… A LOT! 😂 But I’m hoping some of you cross paths with us on the PCT later this year. Good luck Tapeworm on making it over halfway on the AT. 🔥 Enjoy the north. RIP The Doyle. You will do well I’m certain, but I’ll miss the glorious shitshow you once were. How the trail has changed! 🤯
I did a thing today. Probably won’t do it again. But I also said I wouldn’t run 13.1 miles ever again, sooo… 🤷🏻‍♀️Thanks @trevtrevorwhatever for the support, and super rad to catch up with you @wildturkeytrotsthru Thanks for the hospitality!
9/9/21 - Mission Accomplished! 🤘
Montana! You pretty!
Yet again, Montana brought the hiker friendliness in Augusta, and a sweet sunset too! Once we were able to force ourselves to leave, we were off to “The Bob” and finally got to see the Chinese Wall. We’re officially in the heart of grizzly country, y’all! 🐻
The sweet views continued all the way to Augusta!
Had an awesome birthday which I celebrated with my stinky, freeloading #hikertrash tramily, the wonderful people of Lincoln, and Daryl the Sasquatch. The hike from Rogers Pass was just as amazing as the hike into it after we hunkered down in a yurt to avoid the rain. More climbs, but a lot of ridge walking by rock ledges and towers.
No more smoke, but the days have been windy and the nights have been cold. We visited an amazing outfitter in the middle of the trail, got to see Golden, a familiar face from the AT (2016), and lots and lots of cows! I had been in a bit of a funk lately, but the ridge walk right before reaching Rogers Pass snapped me out of it!
Got stuck in the Butte vortex. We hitched in, hitched out, hiked to the north side then hitched back in. Pizza Ranch was our second home. Eventually we made our way to Helena, our second vortex. Before our arrival, we got pounded by hail and rain. The wind was blasting through the trees so hard, they were snapping like twigs behind us. The people of Helena were beyond hiker friendly. We got stuck a second day when a girl working at the brewery let us crash at her place for free, hot tub included! Life’s good!
Posted on June 16, 2019December 28, 2019 by Stubbs

We left our lovely view and followed some nice signage until it led us to Talladega Scenic Drive.

I was dreaming of a breakfast buffet all night, and we planned to consume large quantities of food at the restaurant in Cheaha State Park, a short side trail off of the Pinhoti.

We arrived right as the Cliffside Restaurant was opening their doors. Unfortunately, there was no buffet. They only do that when there are large quantities of patrons, which there was not. We were the only ones there. It all worked out though. The food was still good, the portions were large, and we had a stunning view as we ate. The restaurant reminded me an awful lot like the one we ate at in Shenandoah National Park while hiking the Appalachian Trail (AT). 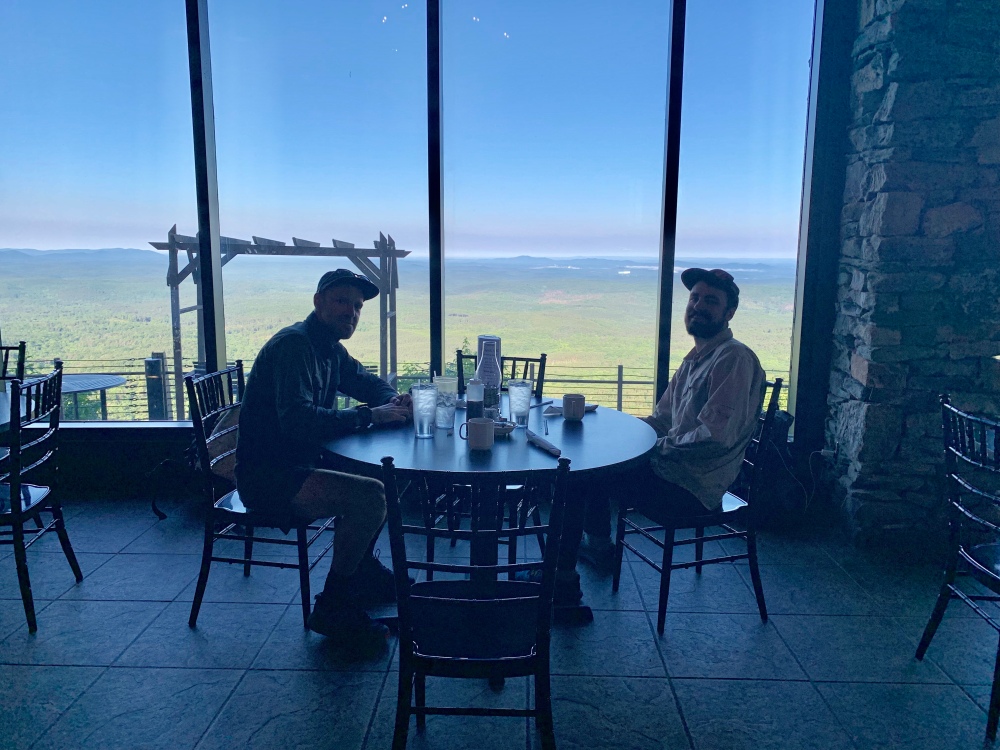 Once our bellies were full, we climbed the steep hill to Alabama’s highest point, Cheaha Mountain. 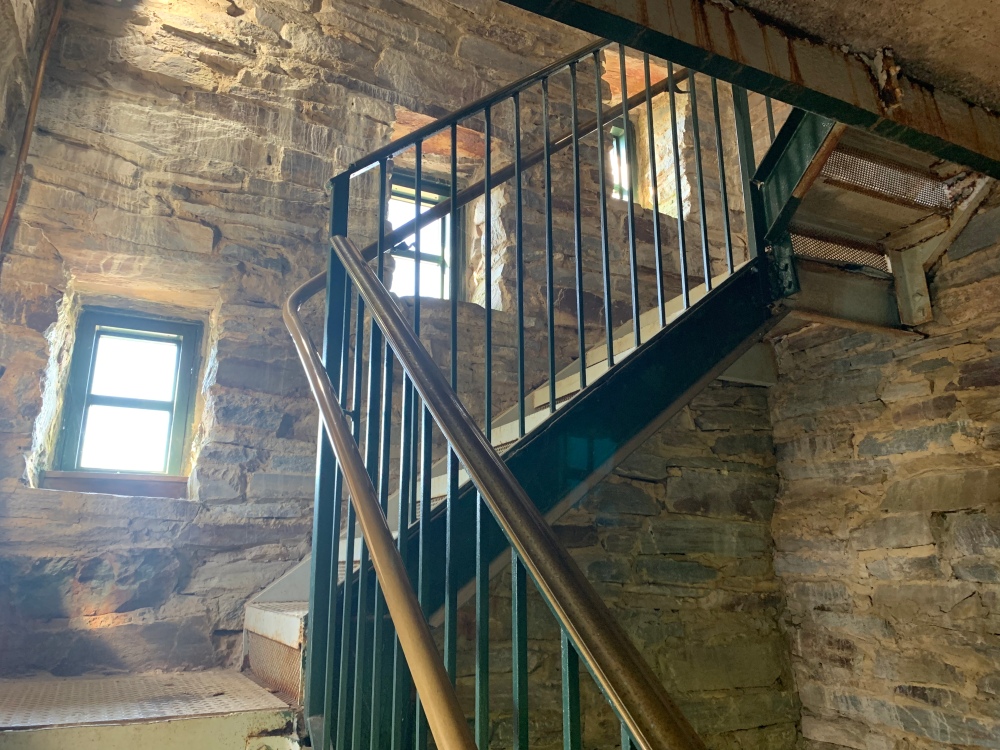 There was a lookout tower, but the view was hindered by the phone towers and the numerous cables holding them up. However, my goal was still accomplished. Peak Bagged!

Shortly after the uninspiring scenery, we were back on trail. There was poison ivy everywhere as we silk blazed the path. 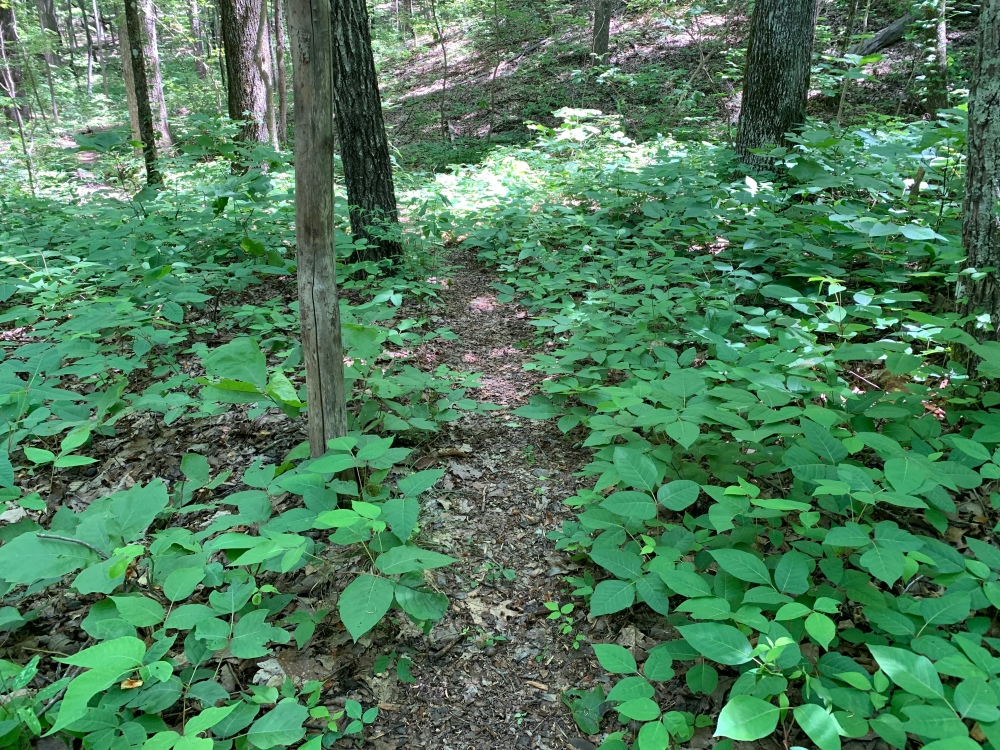 Speaking of spiders, there were these sharp, long seeds that resembled spider legs, or cat whiskers that would cover our shoes and clothing as we passed through the grasses they came from. Not fun.

Frisbee caught a quick glimpse of a bear before we took a lunch break seven miles in by a water source. Then we had our work cut out for us. There were steep ups and downs that felt oh so familiar to the challenging AT. 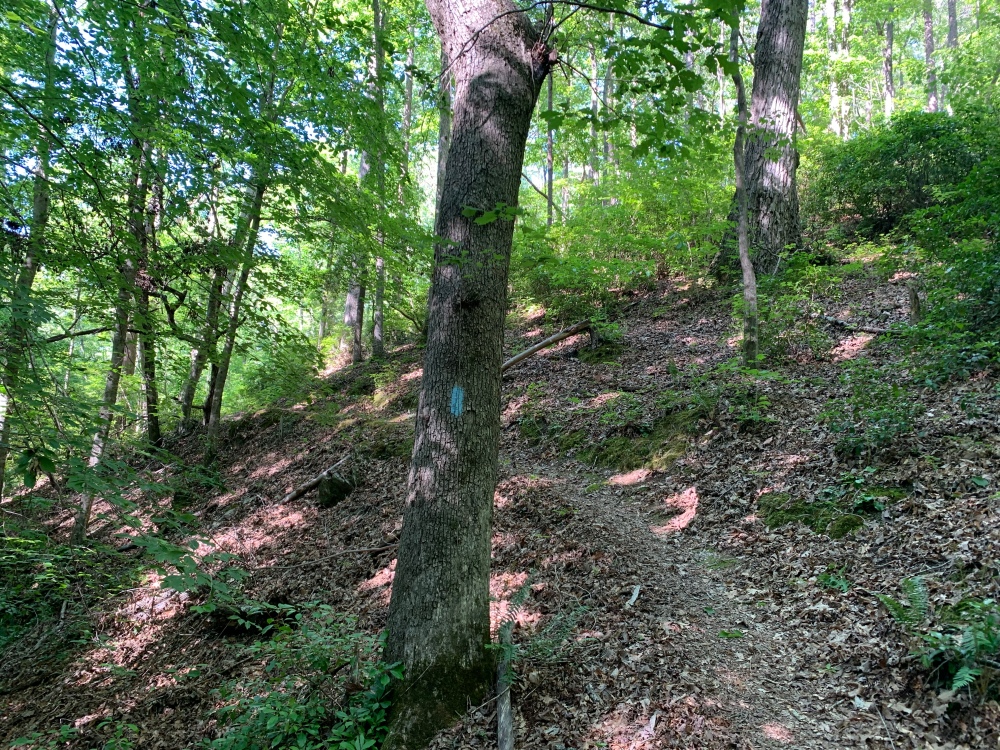 When we got to the cushy pine needle covered sections, my shoes would keep slipping, getting no traction as I walked uphill and slipping when going down. 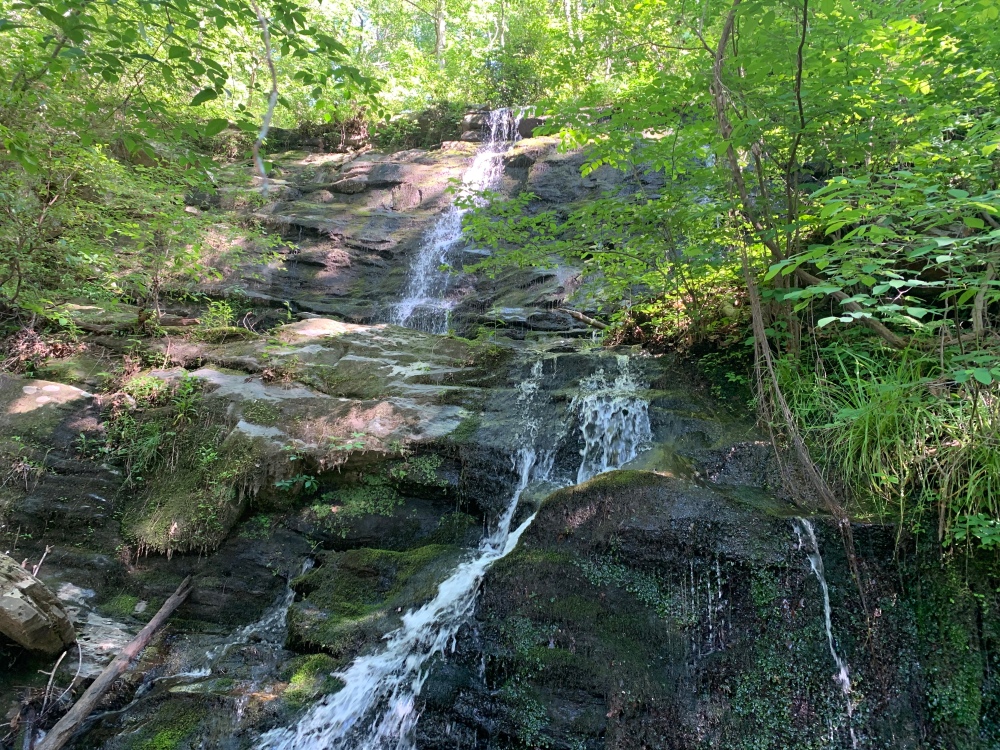 We hiked along narrow ridges, passed a couple waterfalls, and would pick copious amounts of ticks off of ourselves (I can identify three varieties now), before hitting our 100th mile.

We ate dinner at a nearby campsite, then hiked a little less than two miles more to the last one for the night at mile 104.5.

Jump Ahead to The Pinhoti Trail: Part 7

Jump Back to The Pinhoti Trail: Part 5