After spending a little too long out in the so-called “real world”, it was so damn refreshing to meet up with some of my tribe for a multi-day hike on my home trail. To those CDT tram members who couldn’t make it out, you were truly missed and gossiped about… A LOT! 😂 But I’m hoping some of you cross paths with us on the PCT later this year. Good luck Tapeworm on making it over halfway on the AT. 🔥 Enjoy the north. RIP The Doyle. You will do well I’m certain, but I’ll miss the glorious shitshow you once were. How the trail has changed! 🤯
I did a thing today. Probably won’t do it again. But I also said I wouldn’t run 13.1 miles ever again, sooo… 🤷🏻‍♀️Thanks @trevtrevorwhatever for the support, and super rad to catch up with you @wildturkeytrotsthru Thanks for the hospitality!
9/9/21 - Mission Accomplished! 🤘
Montana! You pretty!
Yet again, Montana brought the hiker friendliness in Augusta, and a sweet sunset too! Once we were able to force ourselves to leave, we were off to “The Bob” and finally got to see the Chinese Wall. We’re officially in the heart of grizzly country, y’all! 🐻
The sweet views continued all the way to Augusta!
Had an awesome birthday which I celebrated with my stinky, freeloading #hikertrash tramily, the wonderful people of Lincoln, and Daryl the Sasquatch. The hike from Rogers Pass was just as amazing as the hike into it after we hunkered down in a yurt to avoid the rain. More climbs, but a lot of ridge walking by rock ledges and towers.
No more smoke, but the days have been windy and the nights have been cold. We visited an amazing outfitter in the middle of the trail, got to see Golden, a familiar face from the AT (2016), and lots and lots of cows! I had been in a bit of a funk lately, but the ridge walk right before reaching Rogers Pass snapped me out of it!
Got stuck in the Butte vortex. We hitched in, hitched out, hiked to the north side then hitched back in. Pizza Ranch was our second home. Eventually we made our way to Helena, our second vortex. Before our arrival, we got pounded by hail and rain. The wind was blasting through the trees so hard, they were snapping like twigs behind us. The people of Helena were beyond hiker friendly. We got stuck a second day when a girl working at the brewery let us crash at her place for free, hot tub included! Life’s good!
Posted on June 25, 2019December 28, 2019 by Stubbs

We crossed the same dirt road 20 times while the trail ran us through waist high weeds and thorns. Oh yeah, and the ticks were plentiful too. We were hating life at its current state, and couldn’t wait for road walks. 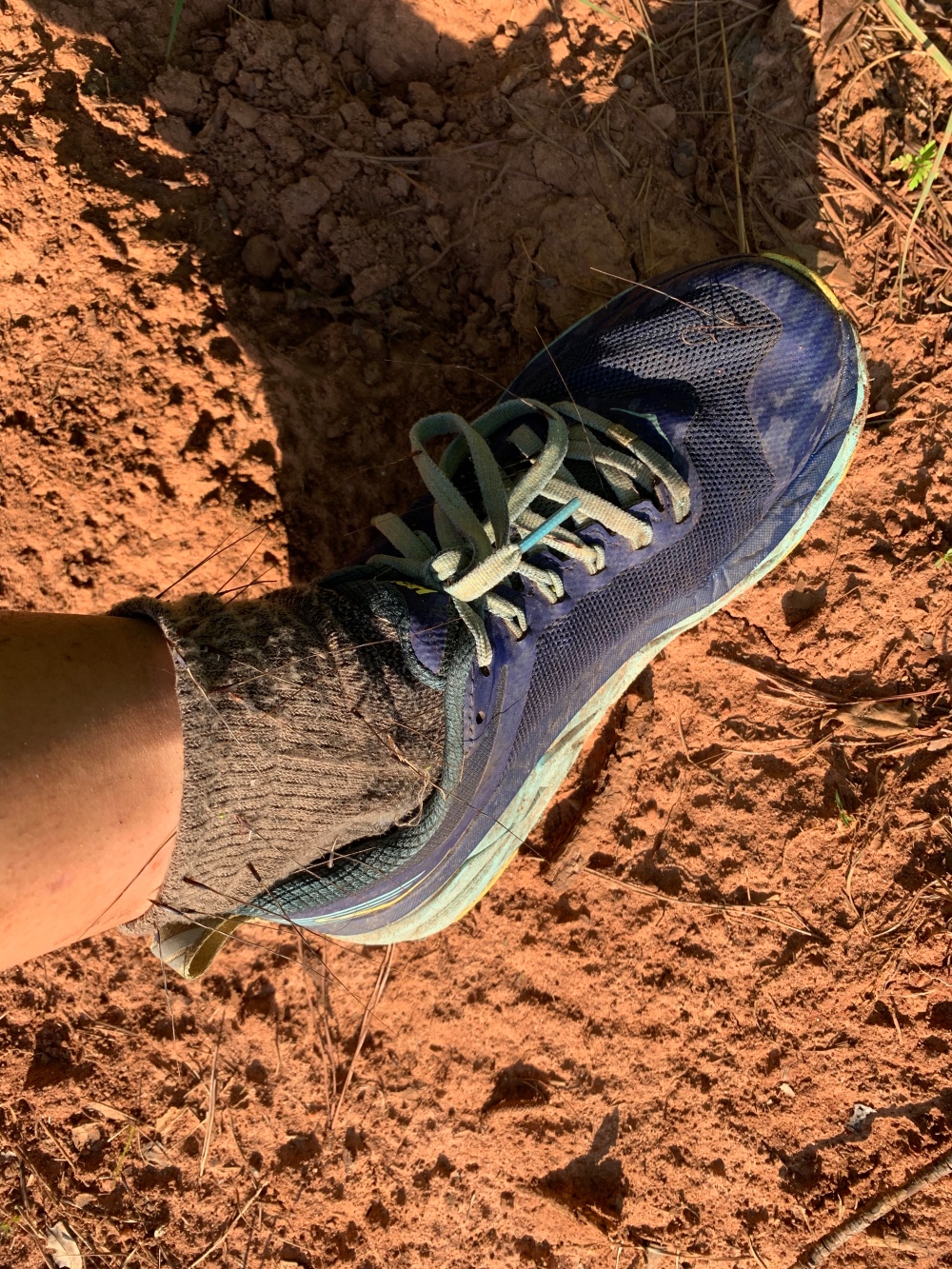 We took a snack break at Hawkins Hollow Shelter. Spacejam was generous enough to share one of his McDonald’s cheeseburgers with me that he packed out yesterday. 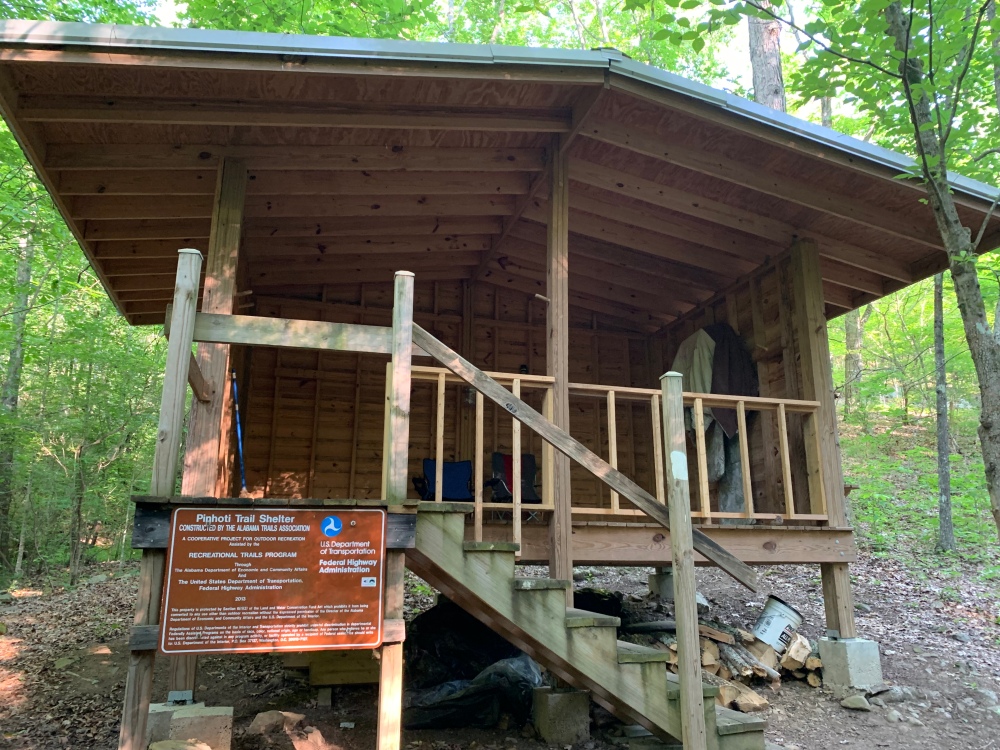 As we climbed, the trail started off fairly groomed, but then we were back to swimming in poison ivy and getting stabbed with seeds. What a tease. At least we got to enjoy a few views.

Then our magic moment finally arrived. We made it to the Alabama-Georgia border! It’s always a great feeling of accomplishment when you cross a state line.

Georgia greeted me kindly. While making a sharp turn downhill, the rocks kicked my feet out from under me and I slammed down on the ground, hard! To add insult to injury, of course Spacejam was there to witness the whole thing. I always happen to have an audience when I bust my ass.

We scrambled through the pines passed a lake and found ourselves confused. The Guthook guide was telling us to go one way, which was overgrown and the blazes appeared to have been spray painted over, and the markers were leading us in another much more groomed direction following white blazes along the Great Eastern Trail.

Spacejam had a different guide that marked both routes, and they led to the same road. Being sick of the overgrowth, we followed the Great Eastern Trail, and would be glad we did. There were new Pinhoti Trail markers nailed to the trees a couple miles in. We’d find out later that it was a very recent re-route that was yet to be updated. 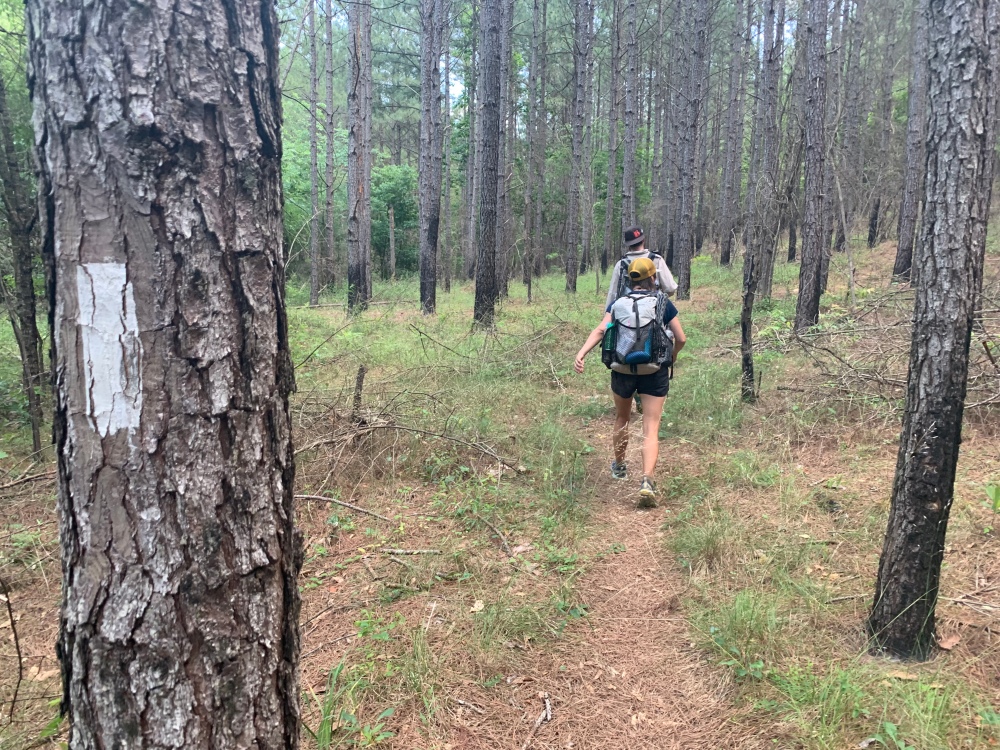 Eventually we reached Cave Spring Road which we had to follow into town. It was a fairly busy road with no shoulder most of the way, and by no shoulder I mean the road was next to a ravine. However, we made it to the cute town of Cave Spring without incident. 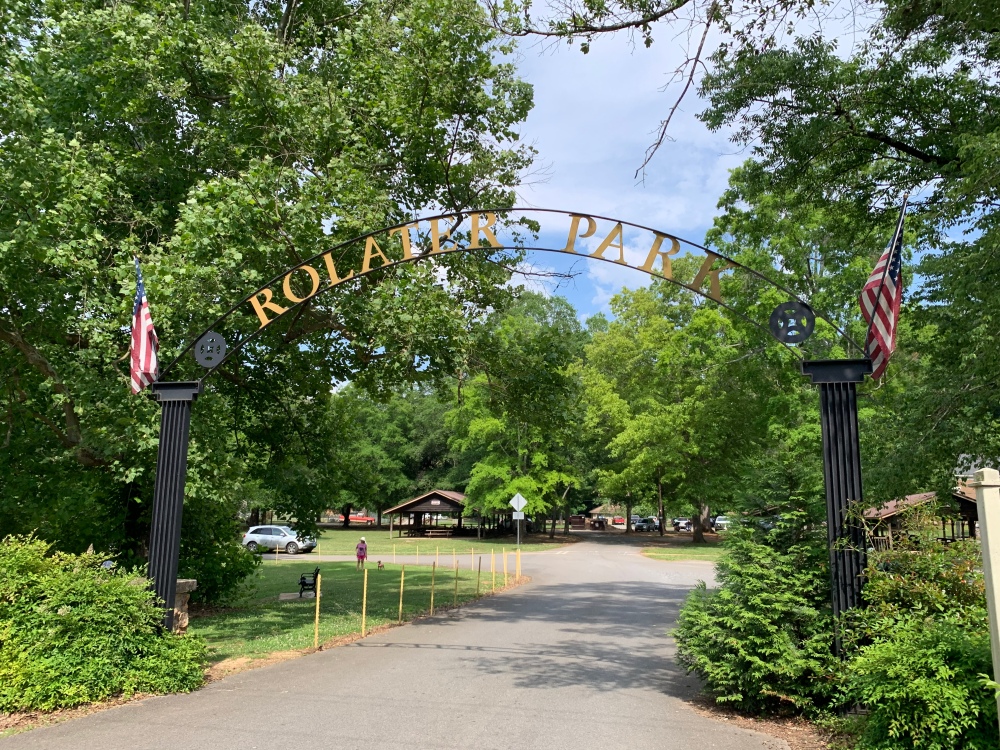 We entered Rolater Park and everyone was eager to tell us about the spring water that was available there. It appeared that people were swimming in it, so we didn’t end up getting any. Two older men riding around the park on a golf cart pulled up to us. They stopped to ask us about our journey and asked us what our trail names were.

I gather the man was just a little hard of hearing. He pointed at each of us and responded with, “So you’re Frisbee, Chubs and Space Champ.”

We all laughed and Spacejam was quick to counter, “She’s only Chubs when we’re in town.”

The man just looked back at us with a blank stare and suggested we get some spring water before we leave town. We thanked them, told them that we hoped they enjoyed their weekend and walked away laughing. Spacejam and I apparently just received brand new Pinhoti Trail names!

When a hiker enters a town, the first thing they search for is food. Frisbee and I stopped at KC’s Grocery store where I got a pint of raspberry-peach cobbler ice cream and a cold Powerade. Spacejam walked up the road to Harbin’s Market gas station instead. We’d head over there afterwards and join him for warm chicken sandwiches. 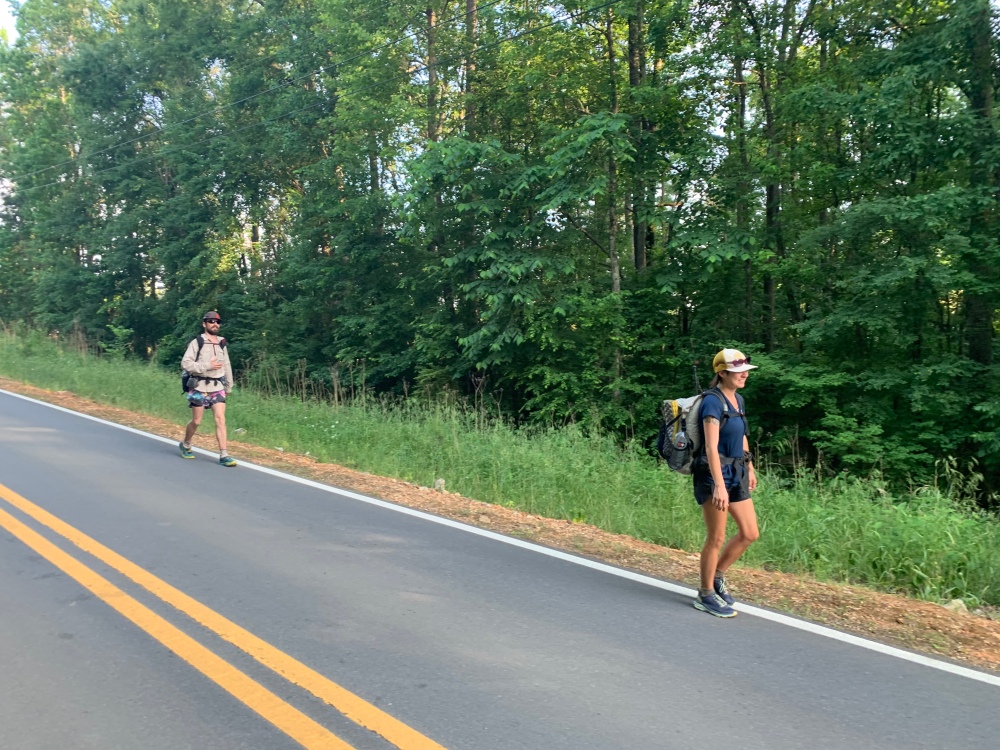 The road walk continued through residential neighborhoods. We were grateful that there was less traffic on this road, but my feet were beginning to hurt. Hard asphalt tends to do that after your body has been used to walking so many miles on soil. We took Spout Springs Road to Blacks Bluff Road Junction where we stopped by Foster’s Mill Store for some more cold drinks. The heat has been rough on us.

After cooling off, we wandered over to the RV park which was rumored to have camping available for Pinhoti hikers. When we got there, there were only residents. We weren’t sure what to do with no one to ask for permission to pitch our tents. We had a long way to go before we’d be returning to the woods again and it was late.

We asked one of the residents and they told us that the owner of the property rarely visited the premises and warned us about the snakes in the grass. After all the snakes on the Florida Trail and the rattlers on the Arizona Trail, snakes hardly phase me these days. They said it shouldn’t be a problem as long as we weren’t a bother. We had no way of contacting the guy, so we quietly set up on a flat area away from the RVs and hoped the owner wouldn’t mind us sleeping there for a few hours.

Jump Ahead to The Pinhoti Trail: Part 12

Jump Back to The Pinhoti Trail: Part 10